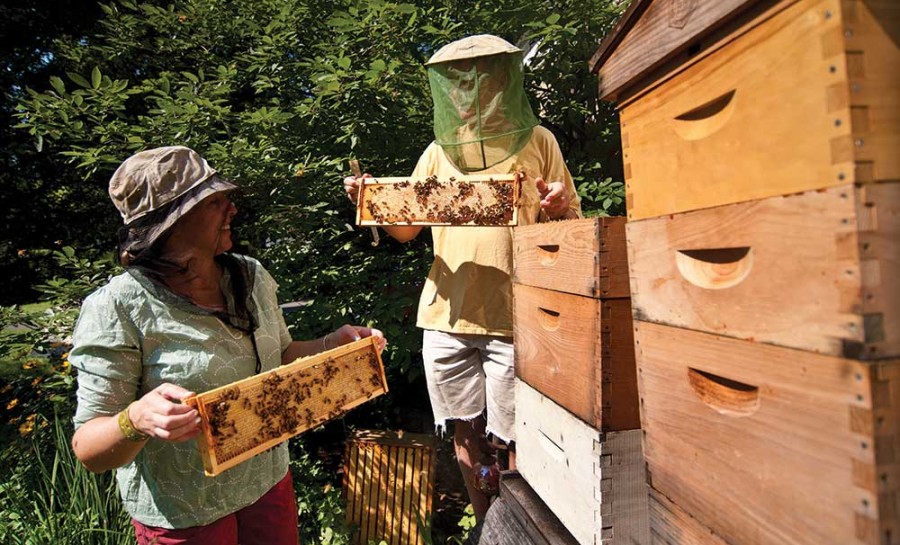 About 23 years ago, Tom Pfeffer, a married father with three young children, set out from Brooklyn on a family house-hunting trip to Kingston, where he discovered an impressive limestone two-story for sale. At the time, the Jacob Ten Broeck House, a landmark with roots in Kingston’s early days, was listed for more than the Pfeffers were willing to pay. The offer he made was rejected, and he considered buying on the other side of the river. Then the house slid into receivership. Eventually, Pfeffer bought it from the bank, and the purchase was interesting enough to warrant mention in the real estate section of the New York Times.

“Of course I loved the house,” says Pfeffer. “But at the time our first consideration was the children’s schools. We found out how good Chambers Elementary School in Kingston is—that’s where all the IBM employees sent their kids at the time—so that sealed it. I prefer this side of the river anyway.” 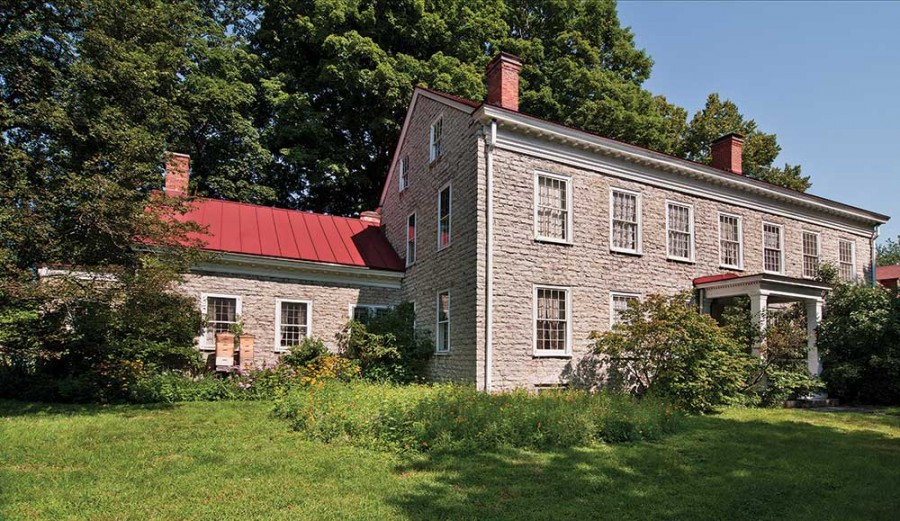 Pfeffer, a successful investor raised in Connecticut, studied art in college and lives by the mantra “Buy low and hold,” which also explains the thinking behind his extensive collection of relics.

“This street [Albany Avenue], with all the big houses but an eclectic feel, really suits me,” he explains. “And of course there’s the easy access to Uptown, the Thruway, and the Kingston-Rhinecliff Bridge.”

The Jacob Ten Broeck House, listed in the National Register of Historic Places in Ulster County as built in 1803, probably dates from 1772, claims Pfeffer. The kitchen wing, on the south side of the structure, seems to be part of an earlier structure mostly destroyed when the British burned Kingston in 1777, during the Revolutionary War. It apparently belonged to the son of Jacob Ten Broeck and Elizabeth Wynkoop, famous names in the annals of early New York history. Jacob Jr. died in 1793 at the age of 69, but he’s apparently not buried in the nearby Sharp Burial Ground. (Also known as the Albany Avenue Cemetery, the site was used during the middle decades of the 19th century after the nearby churchyards became too full.) 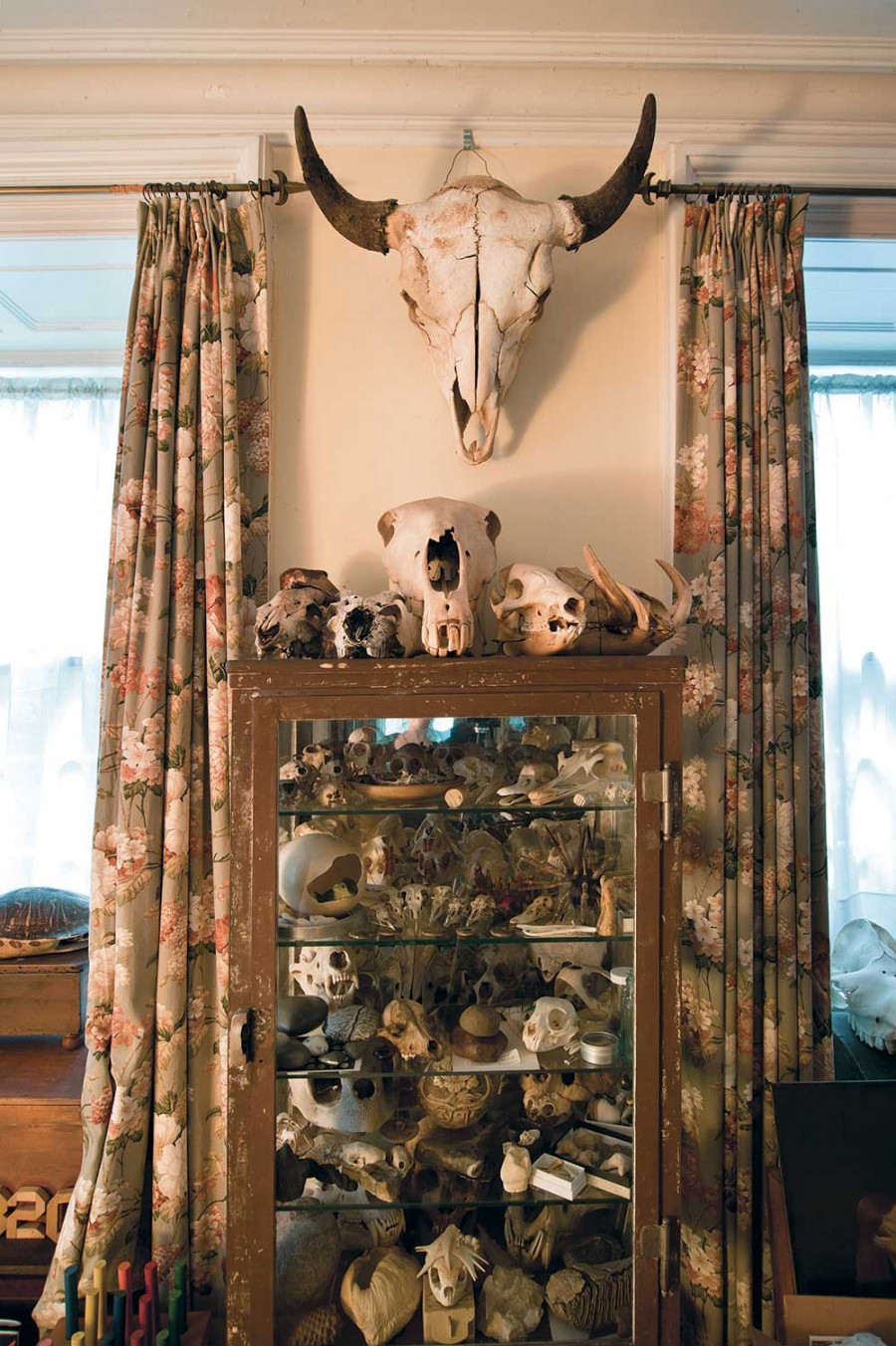 Does close proximity to a historic cemetery dampen his property’s appeal? “That’s just what you get around here; I love Kingston’s rich history, the old Senate House,” Pfeffer says. “Of course, I also collect animal skulls and prison shanks, so some people think my taste is a little warped. A previous owner had everything very conventional—you know, period and exactly the way you expect a stone house to look. My aesthetic is influenced by the work of [artist] Joseph Cornell.”

Ironically, Cornell, known for his boxed assemblages of found objects that weave nostalgia with irrational juxtaposition, appears to be related to the original owner of Pfeffer’s home: Cornell’s mother’s full name is Helen Ten Broeck Storms Cornell. Cornell is considered one of the foremost heralds of installation art, which is how Pfeffer views his residential decor.

“It’s really one big installation. I like finding things at flea markets and putting them together,” says Pfeffer. “My curio cabinet, with the chase lighting, in the living room, is my most direct tribute to Cornell. My mother recently looked at it again carefully, and had fun recalling the toys I had saved from my childhood, which are now presented and cherished in this admittedly unusual way.” 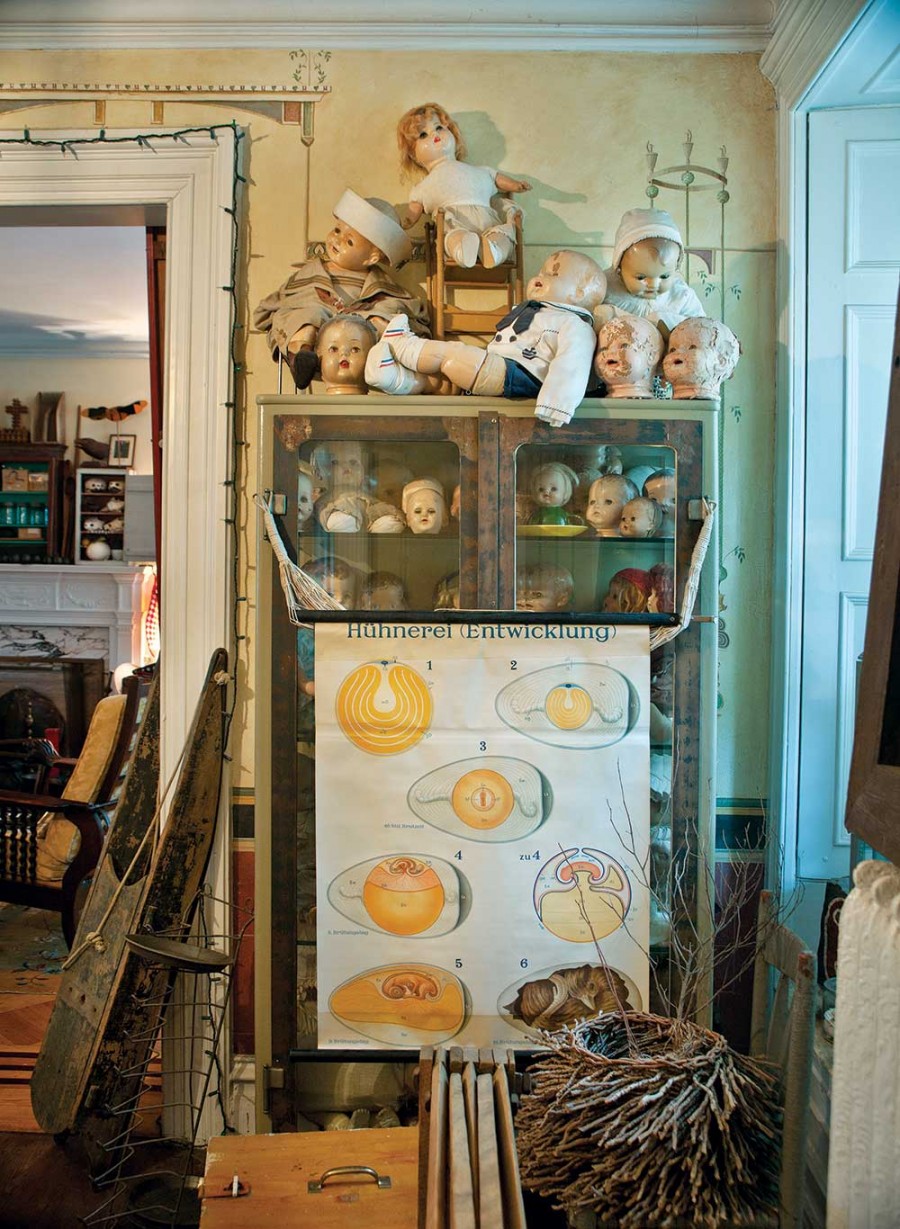 There’s another cabinet in the central hallway that’s brimming with antique doll heads. Missing only the fake blood and phosphorescent maggots, it recalls a set design at Headless Horseman Haunted Hayride, one of Ulster County’s most unusual businesses. Some of the dismembered dolls once belonged to Pfeffer’s daughters; one’s a fashion design student, the other studies psychology. Pfeffer’s son is a painter, and his vast abstract-expressionist canvases bring color to two bedrooms. “I’ve been so proud of the art my children have made for school projects. Sophisticated stuff, using pieces of ‘retired’ dolls. But having a display like this in such a prominent place takes a leap of faith because some people find it really creepy—particularly in a formal house like this. I’m like an aesthetically warped country gentleman.”

Pfeffer’s manse of toys, nests, and tools sits on 10 acres, most of which are in a 100-year-flood zone that has seen deep standing water several times in the past 21 years. During the aftermath of Hurricane Irene in 2010, Pfeffer and his partner of a decade, Susan Hereth, who worked many years for Scenic Hudson, got out their canoes and paddled around the backyard to check out the damage to their outbuildings and vegetable garden.

The Jacob Ten Broeck House was added on to substantially sometime in the 1940s, possibly again later. It now measures 5,000 square feet with four bedrooms and four baths, plus a bluestone patio and a balcony off the new, oversize, master bedroom, which has wonderful light and a terribly romantic view. In a Cornell-like point of contrast, a reinforced emergency tunnel out of the basement was added in the aftermath of the Cuban missile crisis. 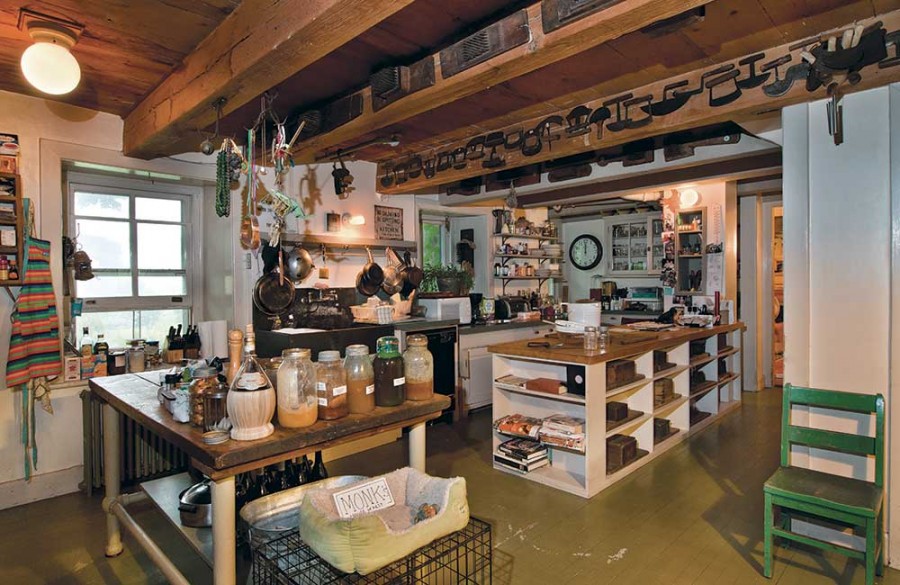 Pfeffer and Hereth host a party every summer when the traveling fair sets up camp in Hannaford Plaza; the view of the from the patio of the fireworks display is completely unobstructed. “This house is just wonderful for parties, and I get a kick out of showing people my treasures,” says Pfeffer. “I’m involved with the Art Society of Kingston and Friends of Historic Kingston, so we’ve had events here for both those organizations.”

Good friends bring something delicious to share, and the huge dining table brims with offerings. “I found the dining table in the basement of an old commercial building in Greenwich Village,” says Pfeffer. “The vinyl covering was falling off, so I just stripped it down to the pine boards, and see, it matches the floors. I don’t recall what I paid for it, but it wasn’t very much. Guests can’t accidentally damage it with wet glasses—it’s already distressed.”

Pfeffer added the man-made pond. In his early years at the house, the family kept a menagerie of farm animals, mostly chickens and sheep. Once, a runaway lamb even made the headlines of the Daily Freeman. These days, except for two well-behaved dogs, there’s nothing domesticated roaming the property in fur or feathers. But there’s an exciting buzz, nevertheless. 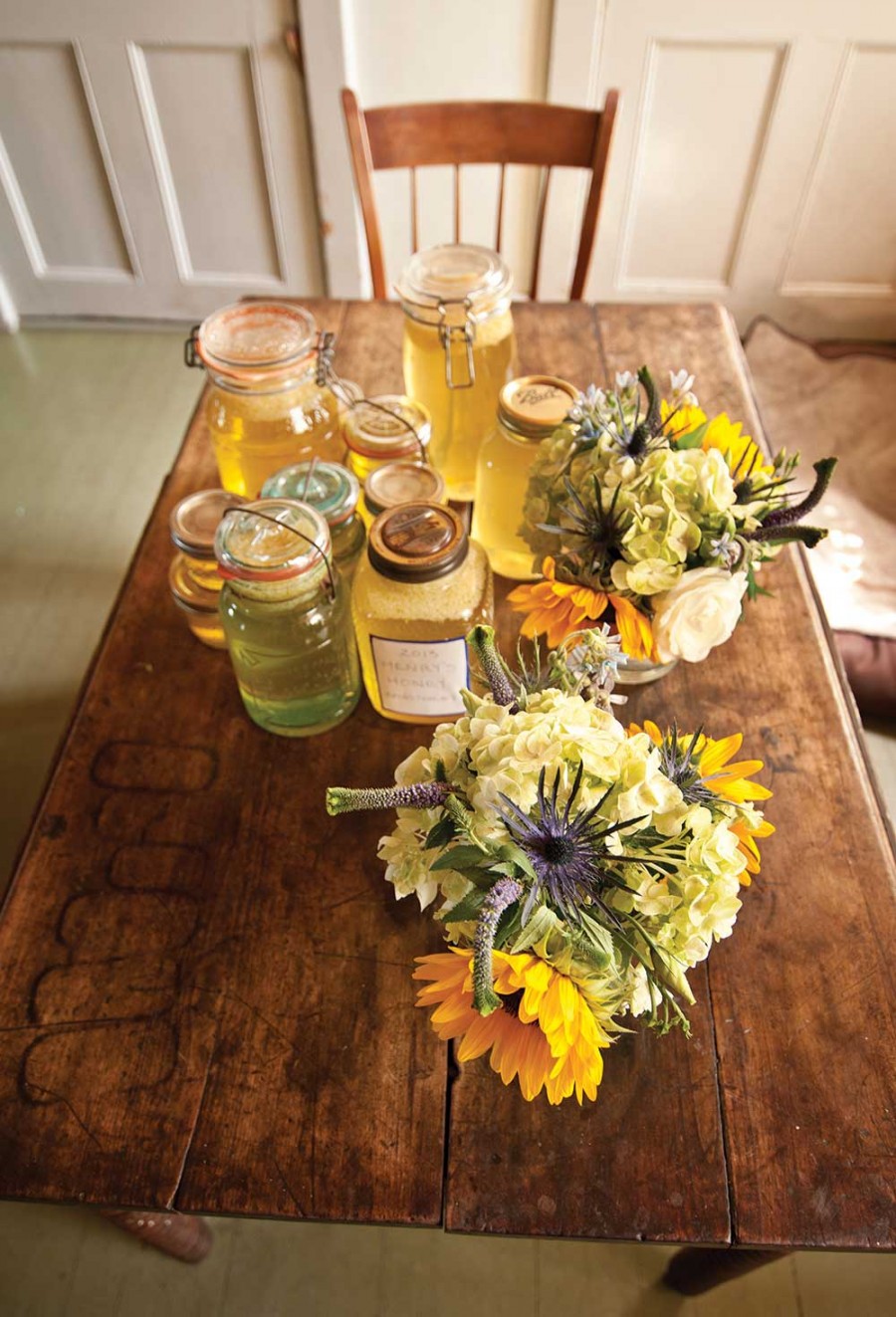 “I’m really, really into keeping bees these days,” says Pfeffer. “Susan and I go to various association meetings in this area. My favorite is the one in Acra. It’s all these old Germans—fascinating people. I feel unusually fulfilled by it. Now that my children are grown, here I am taking care of the bees, which, as you know, are having some problems these days.”

Right now, Pfeffer’s buying small jars of craft honey and, when he finds it, vintage beekeeping equipment. Several of his previous collecting enthusiasms have matured into caches of real value, perhaps most notably, his vast collection of Early American ceramic mixing bowls. “It’s easily worth double every cent I paid,” says Pfeffer. “But I don’t know how much the flax combs that decorate the kitchen have appreciated. They used to be much easier to find at yard sales. The advent of eBay has really hiked the price of primitive tools.”

Pfeffer says a hidden value of being a collector is that his friends and family never give him anything awkward or useless—no Hummel figurines line his shelves. “Years ago, a man with whom I am now in a real estate partnership gave me a tortoise that had been sitting in his freezer for a year. I took it out back and gave it to the insects, and that’s how I got the meat out. Now it’s here in the display case, across from the 1972 Moto Guzzi motorcycle.”

Whether or not you’re one of those who thinks Pfeffer’s taste really is “a little warped,” it’s clear he loves the Jacob Ten Broeck House and loves taking care of it—in a way that would certainly do Joseph Cornell proud. 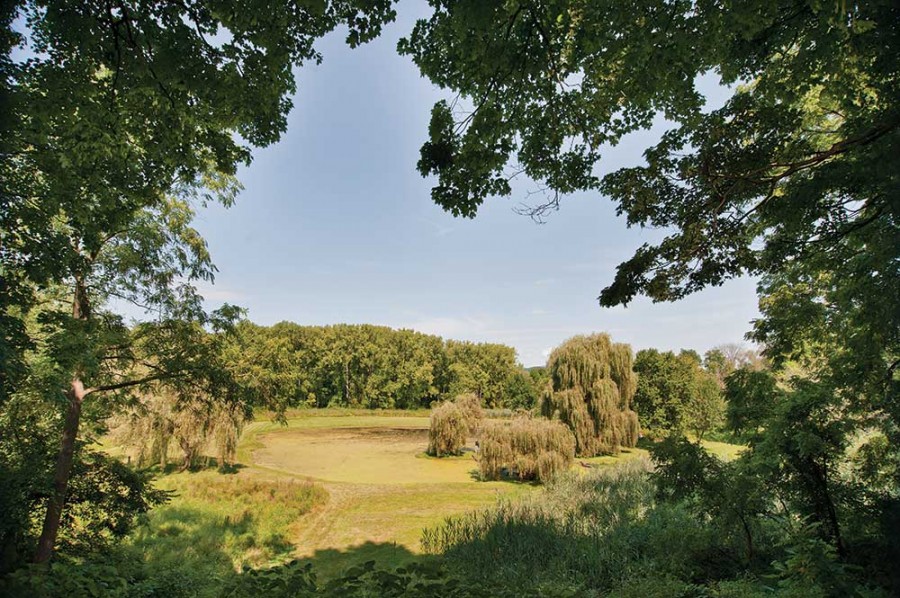