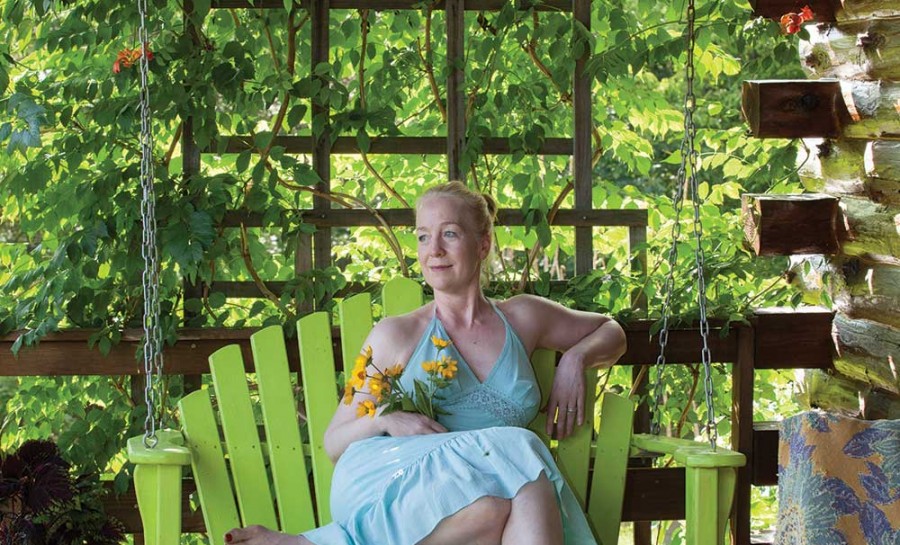 Like in a dream, this interconnectedness of cabin and garden, of hard and soft, of structure and living things is so fused that the boundaries become soft and gauzy, flowing fluidly from one space to the next. Profusions of houseplants indoors give way to assorted porch groupings of potted, jewel-hued coleus and lush canna lilies and a trellised trumpet vine for the hummingbirds. In the garden proper, plumes of miscanthus grow; a giant fieldstone boulder retaining wall materializes through drapings of Virginia creeper and rivulets of green sedums; and pollarded catalpas with enormous heart-shaped leaves frame whiskey barrels of burgundy castor bean, orange Profusion zinnia, and lime-green Margarita sweet potato vines. A rail fence intertwined with grape and akebia vines provides a softly muted barrier to the distant panorama of the eastern Catskill peaks.

When the Bellars first met, Mel was living in a partially subterranean apartment. “We couldn’t even keep a houseplant alive in that apartment,” says Mel. The couple soon relocated to an apartment with a roof space large enough for a garden. This outdoor space offered solace from demanding careers—Mel as an IT specialist and Peg as the director of special events for a non profit organization. In order to successfully navigate the extreme climate demands of urban rooftop gardening, the couple completed several landscape design classes at the New York Botanical Gardens and volunteered at the Brooklyn Botanic Garden. Their experience creating beauty and tranquility in harsh urban environs prepared them for tackling a rural landscape.

When they bought their cabin in the fall of 2001, it was nothing more than a bulldozed landscape with a house and a magnificent view east toward the Catskill Mountains. “The hill went straight down and the driveway went straight up,” remembers Peg. Despite demands for immediate structural and interior renovations, the couple found time to remove lots of white lattice and gravel walkways, dig the first beds by hand, and sow sunflower seeds for a “great near-focus addition to the view.”

They started landscape work in earnest two years later. After building a fieldstone-boulder retaining wall to create level space in front of the cabin, they installed structures and paths—all by hand. They constructed arbors for vines and climbers, and “we had to have a full rail fence,” says Mel. A permeable perimeter, the rail fence provides structural support for plants. The main paths are bluestone pea gravel, while the secondary ones are wood chip. Manageable beds, designed with gardeners in mind, are intimate, lush, and easily weedable. The pondette, a small water feature installed in a raised stone wall, marks the center of the garden. Three native junipers—formal spirals from the old rooftop garden—root the conifer garden credited to Peg. “I didn’t want to be depressed in the winter,” she recalls. “I wanted to see evergreens when driving up to the house, to feel good every time we arrived.” 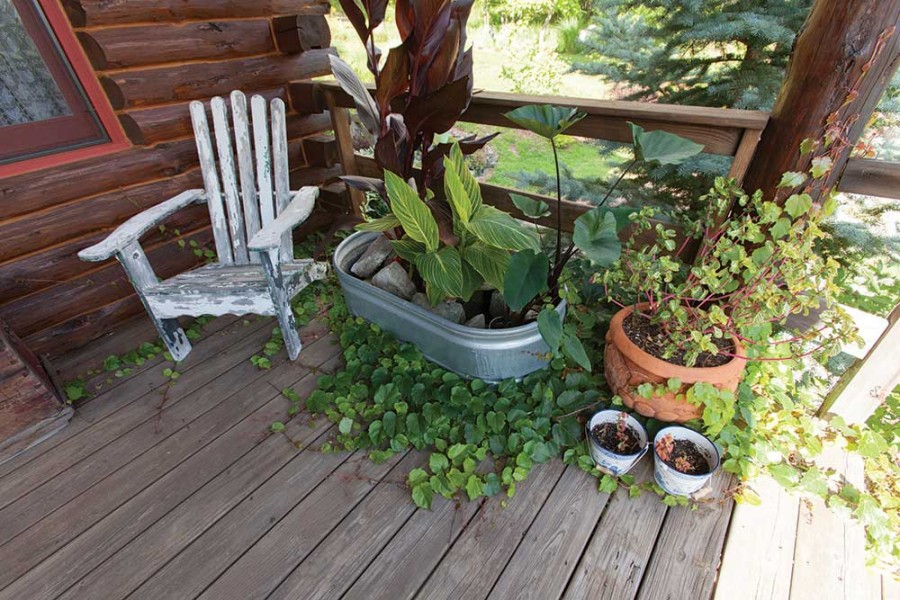 Dotting the perimeter, various mature shrubs contribute solidity amid supple perennials. Enormous cream panicle flowers of Hydrangea paniculata bestow luxurious buoyancy, while purple smokebush contributes breezy vertical accents. Some shrubs, like Harry Lauder’s Walking Stick, have inherently arresting structural form; others require the eye and hand of a skilled gardener to coax their beauty. Over the years, Mel has pruned a French lilac to expose a complex interior structure; what is often a burley bush when unpruned is, in the Bellars’ garden, a contemplative study in architectural branching.

Once the initial form and shape of a garden exists, time and natural processes conspire to create the details—the unique spaces that invite pause and wonder. In their Catskills travels, the Bellars found several round bluestone pavers that they set at the bottom of the stairs. A wide variety of thymes, low sedums, mosses, and mints have softened the edges of the pathways. Donkey’s tail euphorbia, though initially difficult to establish, has self-seeded throughout the garden, creating naturalistic, unfussy flourishes.

Mel admits he is “always rearranging the garden to make it better.” He’s changed the garden six times since 2003. A heating system installed in the pondette creates a warm subzone within the garden, allowing Japanese blood grass to thrive, an unexpected and lovely sight in a high-peaks garden. A trio of bronze cranes at the pool—a wedding gift from Peg’s aunt—creates a moment of deep peace, a charming personal detail within the grander garden scheme. 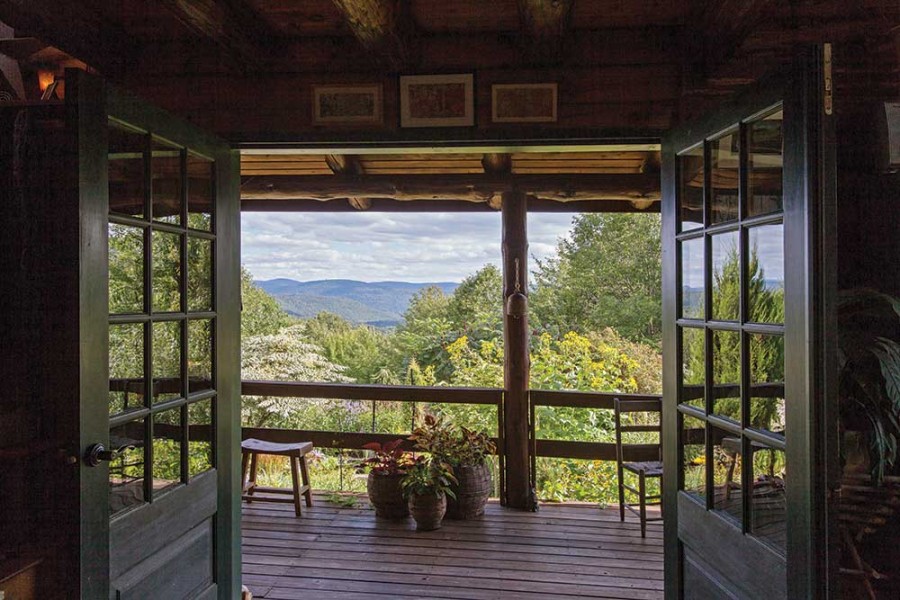 The garden peaks in autumn. Grass plumes turn pink, and Amsonia hubrichtii and Sedum kamtschaticum redden and create painterly burgundy swaths throughout garden beds and alongside pathways. As the leaves on the Hydrangea paniculatas fade, the white flower panicles subdue to a dusty rose while, simultaneously, the voluptuous white blooms of Annabelle hydrangea seem to exhale to papery, delicate orbs. Perennial seed heads appear and sea oats glow gold in the waning autumn sunlight.

The Bellars’ garden envelops, towers over, and often literally touches visitors. Several large zebra and porcupine grasses provide dramatic height and capture the nature of the wind, abundant in the higher Catskill elevations. Other outsize plants—New York ironweed and cup plant—generate a magical garden sense. Peg insisted from the outset that ornamental grasses be included for year-round vertical and spatial interest as grasses often last throughout winter, until wet spring snows finally collapse the browned fronds into defeated heaps. Vines add a rambling, sprawling, twisting element to arbors, trellises, and the full-rail fence. When in leaf, vines soften garden structures; in winter, their brown, serpentine quality provides intrigue and romance, especially when frosted with snow.

Mel traded his corporate keyboard for a trowel and wheelbarrow. He now owns and operates his own business, Zone 4 Landscapes. To be able to offer their customers zone-hardy beautiful plants, the Bellars created an experimental bed outside the garden proper to rehabilitate clients’ castoffs and to test new plants—mostly native. Because natives are “of the place,” once established they are better able to withstand seasonal fluctuations of drought, heat, cold, or wet, thereby reducing garden maintenance and plant losses. Indigenous plants also provide food sources for native insect and animal populations, helping to maintain a healthy ecosystem. 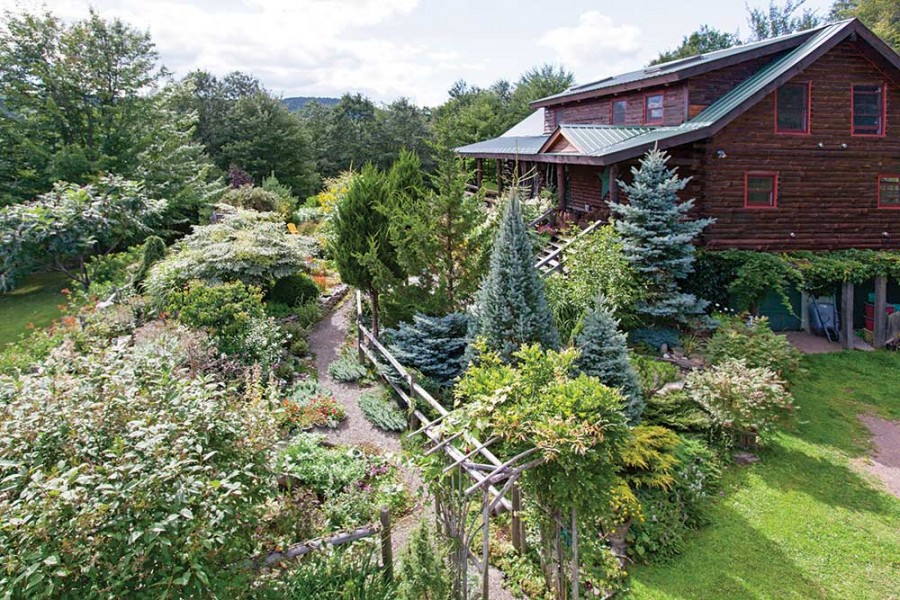 “Since nearly all of the walls are clapboard and natural wood, the color in everything else is important,” says Mel. Numerous houseplants and rustic furniture create a nearly seamless transition from outdoors to indoors. The hand-peeled bark of the indoor walls lends the rustic frontier feel of the porch to interior rooms. Houseplant foliage affords vivid chartreuse, red, and purple hues. Mel crafted much of their furniture using weathered wood and saplings. Both Bellars favor soft, natural fabrics; the couch and one armchair in the great room are upholstered in faded denim, while supple leather covers the other armchair. Colorful handmade quilts drape over beds and hang on walls. A fair collection of tramp art includes numerous popsicle-stick lamps, while colorful throw rugs, many of them vintage, add whimsy and warmth to the cabin.

Avid cooks, the Bellars used Peg’s recent transition to full-time country living as a spur to create a fenced, edible garden. Peg’s childhood experience tending a World War II-era victory garden with her father encouraged their new adventure: attempting to grow as much food as possible. Reviving their tradition of hand-digging beds and paths, they took up their shovels and, says Peg with a laugh, “in the summer we harvested $3,000 tomatoes.” To complement the new garden, the couple plans for a pergola and seating area for dining al fresco. Peg hints at transforming the spiral garden, a spring profusion of daffodils planted as a labyrinth, and Mel hopes to add a tractor with a backhoe and front loader to his cadre of tools. Both wish to make the driveway more horticulturally interesting and to find a sustainable use for the excess plants they pull up when weeding. Weeding happens nearly every day in season. “It is nearly impossible to walk in the garden and not weed,” sighs Mel.