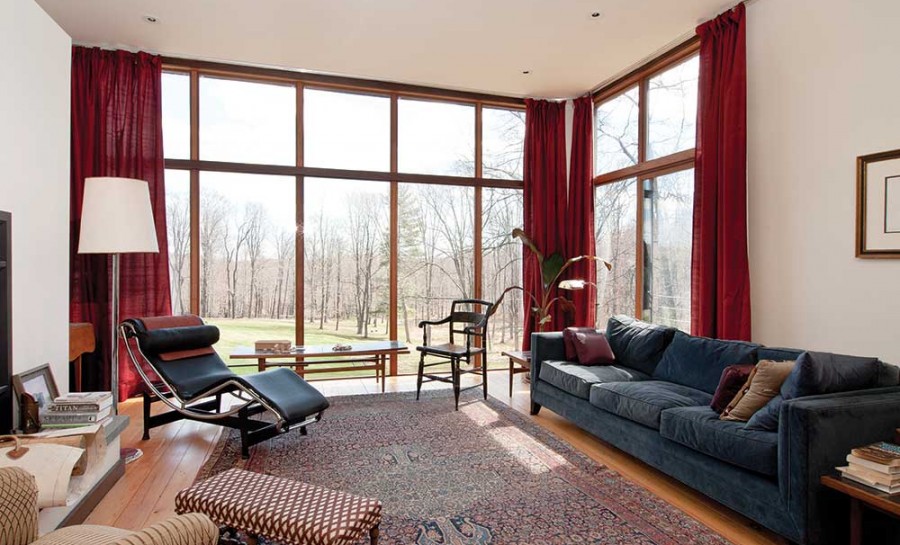 Couple a young doctor with a financial writer, put them in an apartment near noisy Union Square in New York City, and what do you get? Two busy people who need someplace to get away from it all, but perhaps aren’t quite ready to build their dream house from scratch.

So Lou, the doctor, and Howard, the writer, bought a modest, two-bedroom ranch in Millbrook, knowing they would renovate it. But the 1,900-square-foot house, an easy two-hour commute from their apartment, was too small and not situated well—the best view was from the garage—even though it sat on five acres of beautiful countryside, including a private pond. “We knew we could change the house, but not the property,” says Lou. “It was the property that sold us.” 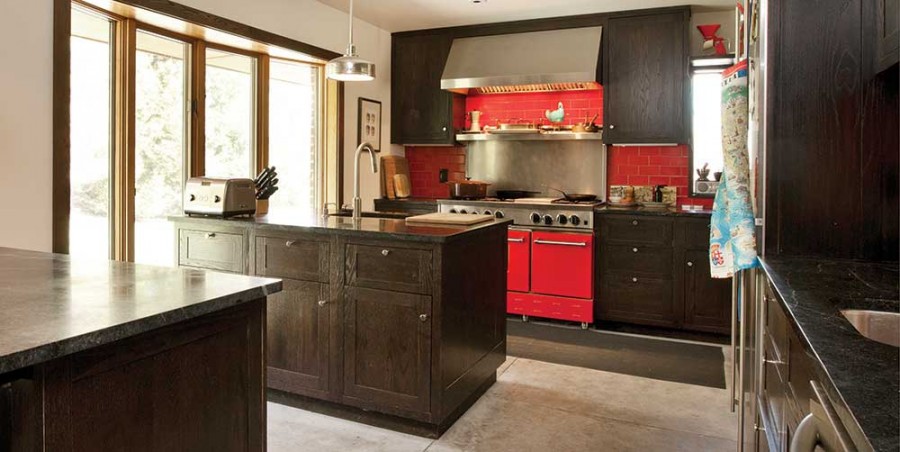 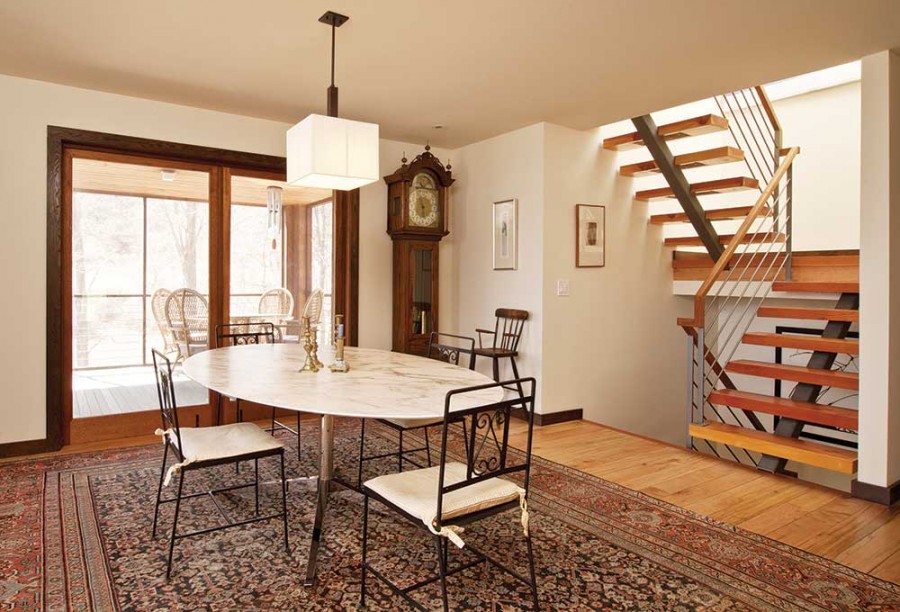 Within a few months of moving in, the homeowners began looking for an architect, a process they compare to finding a therapist. “We had to know our house and ourselves very well, how we interacted, what we wanted, and how we lived,” says Howard.

While attending the Hudson Valley Green Fair, part of the annual Dutchess County Fair in Rhinebeck, the couple met Will Johnson, proprietor of William Johnson Constructions Ltd. (also known as Will III, Inc.), a design and construction firm based in uptown Kingston. The homeowners liked the organic quality of Johnson’s work, especially his expert craftsmanship with wood. They also liked him personally—so much so that a week after meeting him, they sent Johnson an eight-page letter, including photographs, detailing their characters, what inspires them, and their likes and dislikes. Johnson recalls the letter fondly. “It was endearing,” he says, “and gave me a really good idea of who they are.”

The homeowners are both architecture aficionados, and Howard had studied architecture in college. Johnson, meanwhile, has over 20 years of experience in building houses and a broad, deep knowledge of architecture. For a year, the three met to discuss design ideas and draw up a wish list. 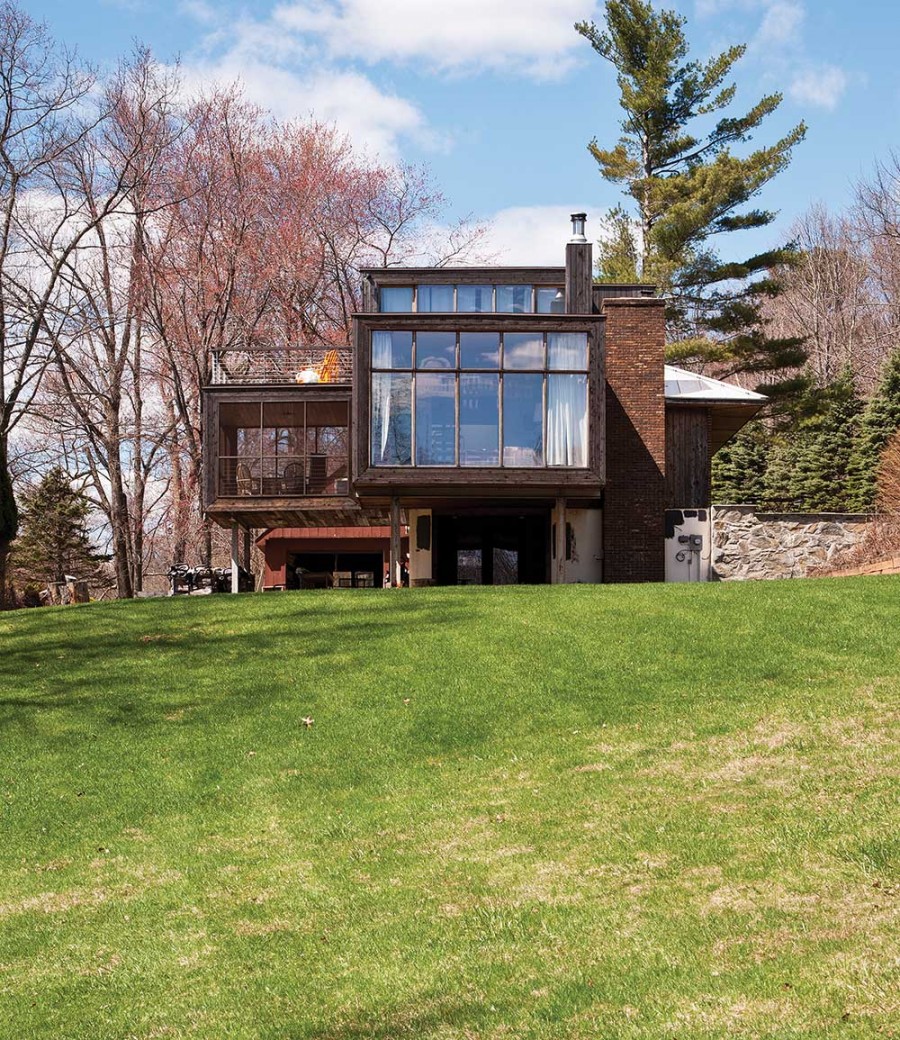 The homeowners’ three biggest requirements for the renovation were to enlarge the kitchen since they both love to cook, create more space in general throughout the house, and reconfigure the house in order to maximize the stunning views surrounding it.

To take advantage of the views, Johnson replaced the old garage with a steel-columned carport, which provided a foundation for the new living room above it; the columns’ candelabra effect on the structure added visual interest to the home’s exterior. He connected the carport’s ground-floor entrance to the upper floors via a steel staircase with a continuous banister, illuminated by a skylight at the top.

In the living room, Johnson installed floor-to-ceiling windows. He also added a screened-in porch off the dining room, further enhancing the view and the general airiness of the central living space. A second-level master bedroom opens onto an attached open-air deck.

To maximize the house’s energy efficiency, Johnson installed radiant floors throughout the house, and a small, on-demand boiler to heat the radiant pipes in the floors, and applied higher R-value spray form insulation within the house’s walls and ceilings.

For the kitchen design, the homeowners made drawings of the paths they traveled most often while cooking, which led to creating two workstations that include three ovens, soapstone countertops, a cement floor, and an additional 200 square feet of space, twice the space of the original kitchen.

The homeowners liked the idea of juxtaposing industrial material with warm, organic wood finishing, including locally-milled, spalted maple flooring that Johnson laid throughout the rest of the house. 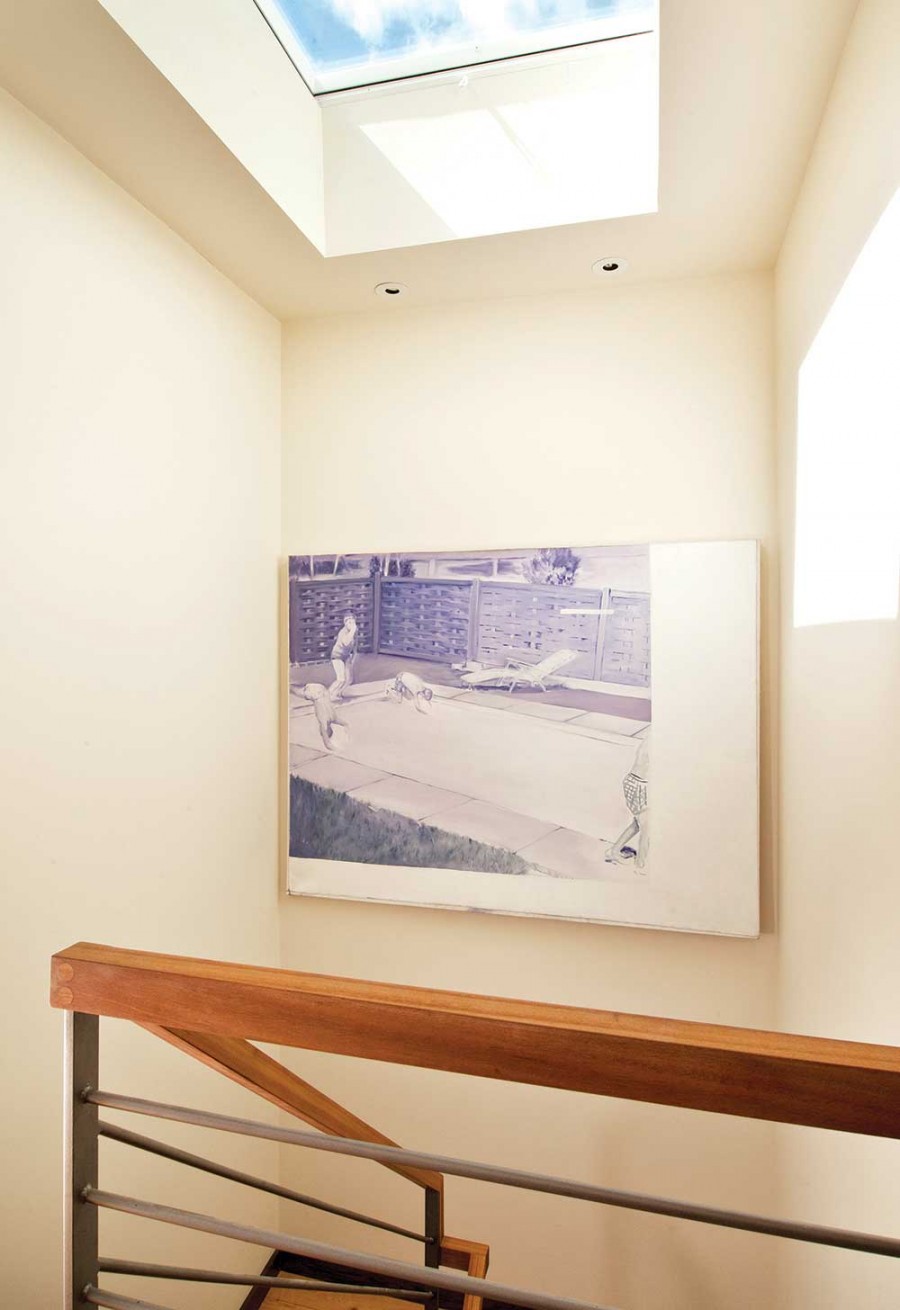 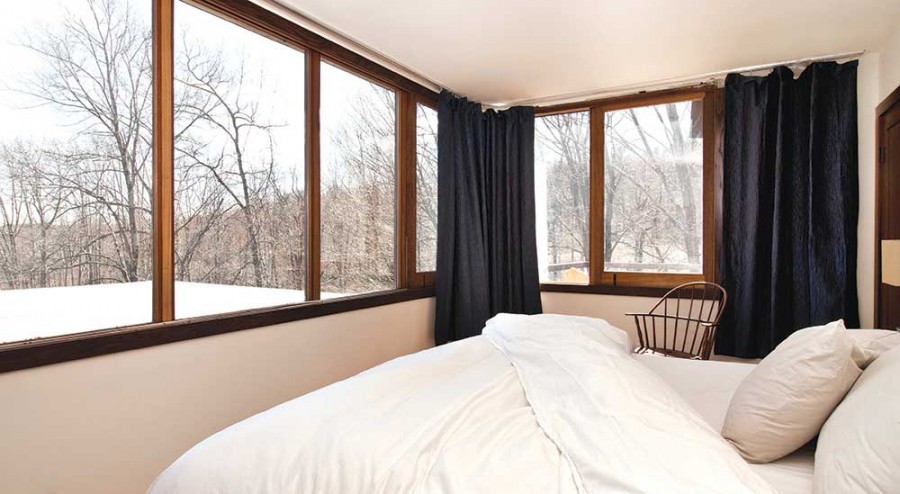 “One of the nicest things about the house is that all the materials feel natural and unfinished, but they work together really well,” Howard says. “[The house] can accommodate a Florence Knoll table as well as my grandfather’s grandfather clock.” That juxtaposition of modern with antique is found throughout the house, which also includes an eclectic collection of fine art.

The homeowners couldn’t be happier. Howard loves the large kitchen and the “floating” living room. Lou loves the skylight in the stairwell and the screened-in porch, which is reminiscent of “being in a tree house.”

So how does the finished home compare with the homeowners’ original wish list? “We got almost everything we wanted, minus the outdoor shower, which we ended up scrapping because it didn’t really fit,” says Lou.

“But that was a really important part of the process,” notes Johnson, “to go through that initial sort of architectural fantasy, and then sit back and take an honest assessment of the pros and cons of how well it would actually function, how much it would actually cost, and how’s the flow of the house going to work? What’s nice is to let the floor plan be the driving factor of what you need.” Johnson says this “inside-out approach” to architecture is “how you get a certain essence of the building.”