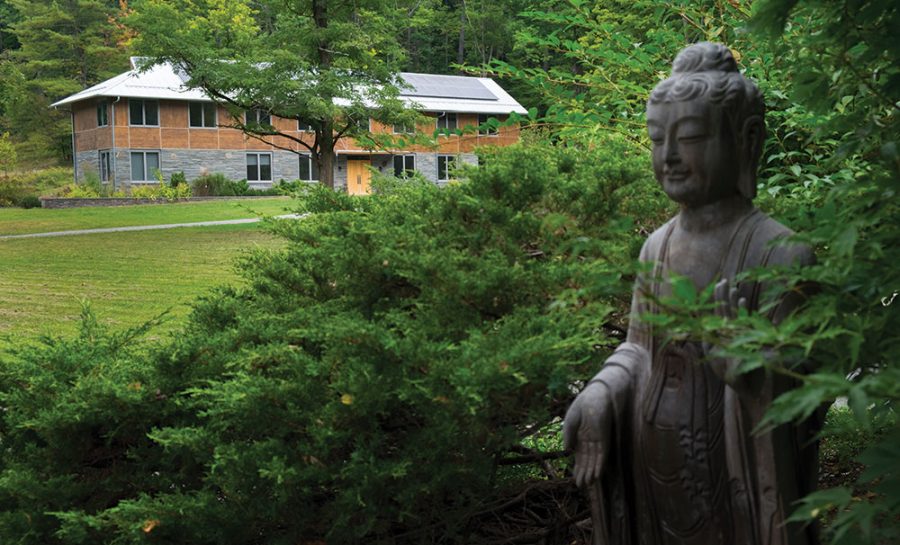 A house of worship, by design, reflects its community’s culture, and provides a space from which its members can view their everyday lives in spiritual terms. So it isn’t surprising that, as the issue of climate change receives more and more attention, Hudson Valley ministers are designing buildings with green-building elements that not only decrease their carbon footprint but also forge a deeper connection to both spirit and earth. 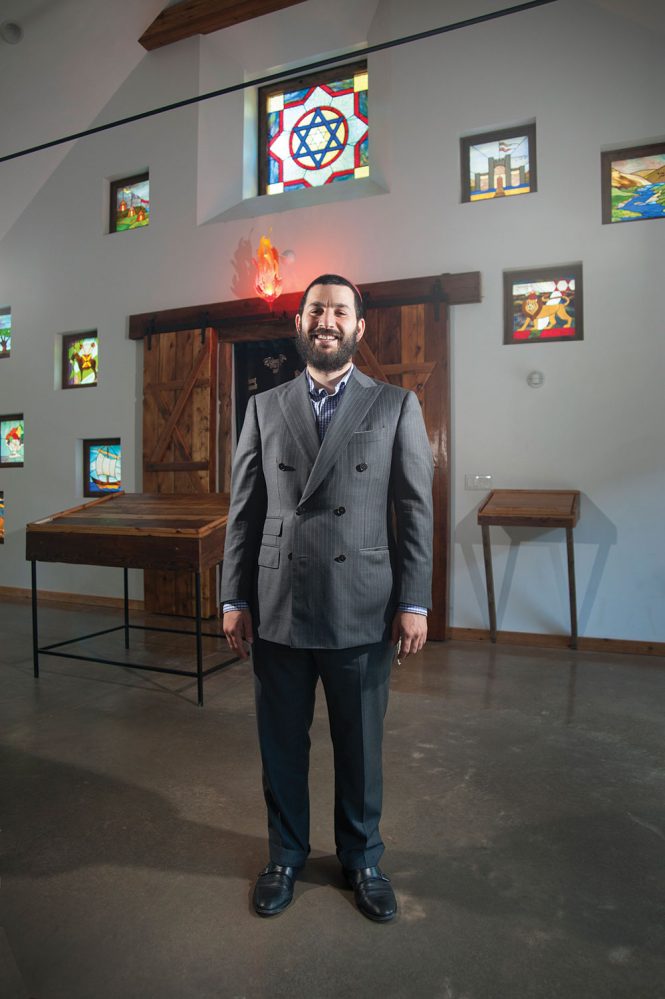 Thou shalt not waste – For Rabbi Hanoch Hecht of the Rhinebeck Jewish Center, spirituality and environmentalism are intrinsically connected. “The whole concept of going green all falls under the commandment of ‘Thou shalt not waste,’” he says.

Reducing waste is central to the building, which opened in 2015. The structure was built with 100-year-old reclaimed barn wood. Several items in the synagogue, including the ark, where the Torah scrolls are kept, the bimah, the platform on which the Torah is read, and the bookshelves, are also made from reclaimed barn wood. Outside, the front patio and walkway are made of tiles from the walkway of the former Nevele Resort in Ellenville.

The center composts; grows grapes, tomatoes, peppers, and other produce in a backyard garden; and, through an underground pipe system, reuses rainwater for its mikvah, a bath for women to perform purification rituals.

The synagogue can’t hold the approximately 1,000 people who sometimes visit for the Jewish high holidays, but Hecht doesn’t worry about those days. He simply puts up a tent if necessary to house the overflow. His motto echoes that of his spiritual brethren: By attempting to limit waste and use, he hopes to connect faith to an obligation to respect and protect the environment.“There’s a limit to how much we can do,” Hecht says, “but don’t underestimate the impact of what we can do.” 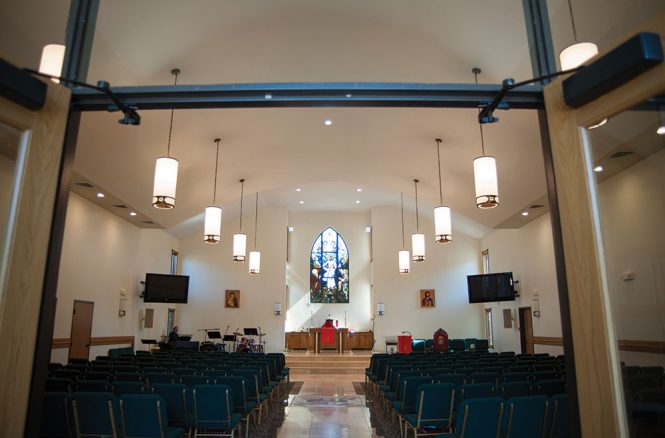 Sacred Energy – Building contractor Keith Libolt and his family moved to New Paltz in 1997 to help with the various ministries of Christ the King Church. As a Charismatic Episcopal church, Christ the King focuses on the belief that the Holy Spirit is present in everyday life. Originally housed in a small structure on Main Street in New Paltz, the church’s growth forced its leaders to find a larger worship space. They secured property in 2007 and opted for energy efficiency in constructing the facility, utilizing Libolt’s Energy Star certification.

“We employed much of the established good-building practices that were out there,” says Libolt, who is a deacon at Christ the King. “The discussion was, ‘Let’s do the best we can, but we don’t want a science project.’”

The new Christ the King space opened on Palm Sunday in 2009. Because of its energy-efficient design, it has a modern look, with glass walls—mostly to reduce heat loss and gain. That fits with the Charismatic Episcopal tradition, in which services can involve modern music and technology.

“It was about using the architecture in a way that creates a sacred aesthetic but also provides some energy value to the building,” says Libolt. 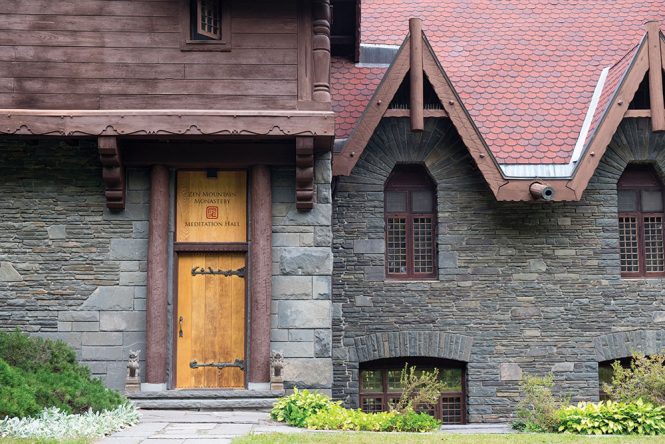 Living by Example – Zen Mountain Monastery in Mt. Tremper, a center for Western Zen Buddhist worship and training through the Mountains and Rivers Order, juggles its conservation desires with an often incompatible existing structure.

The monastery’s main building “was built during the Depression and is not very green and pretty inefficient,” says Bear Bonebakker, the monastery’s office manager and work supervisor, who is known at the monastery by the Buddhist name Gokan.

Zen Mountain Monastery has added insulation to its main building to reduce some energy use but has focused most of its attention on Sangha House, a timber-and-stone building used for retreats. The south-facing building has seven separate heating zones and low-flow water fixtures, and is energized by both ground-mounted and rooftop solar panels. 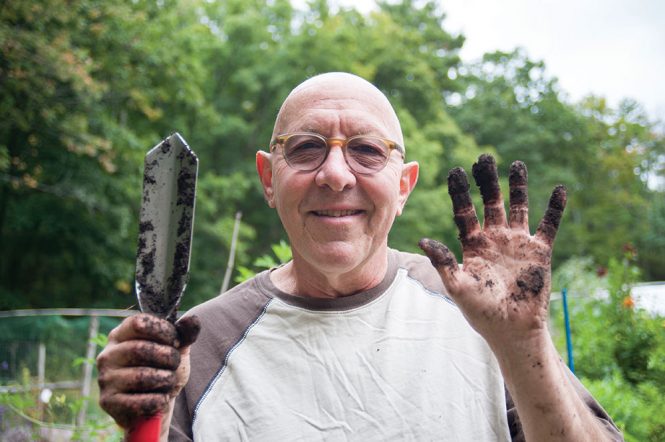 “That’s actually producing more than we use in the Sangha House, so in a few years it will offset our use in the main building,” Bonebakker says.

Steadily moving toward greater energy efficiency is important, but just as important to Zen Mountain Monastery is influencing worshippers and visitors.

“People come and see our solar products. We separate paper products from things that go into the landfill,” notes Bonebakker. “Hundreds of people come through here every month and see something, then do something for themselves.”