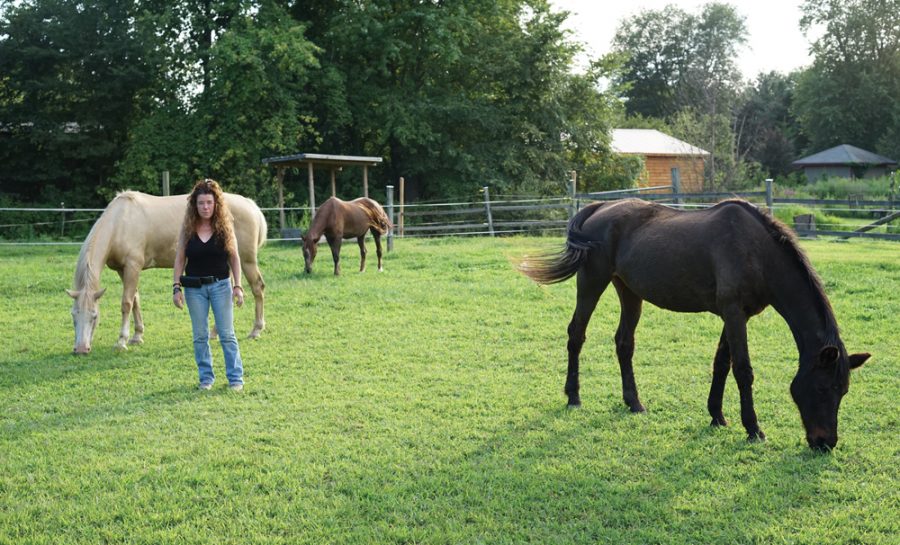 Sunrays, Inc. isn’t like other horse farms. Instead of being tucked away in the country on a quiet pasture off a back road, it’s situated on a rare parcel of open land in urban Kingston, not far from the shopping mall.

The nonprofit horse rescue organization was founded in 2017 with a mission to bring accessible-to-all equine-assisted therapy and programming to this urban community. “It was important for me to be in Kingston because of the diversity. There are many groups of kids and adults here that I believe can benefit from having horses be part of the community,” explains Sunrays founder and executive director Bonnie O’Hara. “You never know how one life might be touched by one of these meetings with a horse. This was one of the main reasons for starting Sunrays.”

O’Hara, a New York City native who’s lived in Ulster County since 2002, is a photographer and fine arts instructor who fell in love with horses early on. Family trips to Belmont Park, a Queens racetrack, ignited her equestrian interest, as well as that of her sister Kelly O’Hara, who had a career as a professional jockey.

While an undergrad at New York University in the early ’90s, O’Hara “thought it’d be kind of cool to ride horses in the city,” so she joined the college equestrian team. Postgrad art studies brought her to Bard College, which gave her a lasting appreciation of the Hudson Valley. She eventually returned—though not before living in Nashville and Wilmington, Vermont, where she acquired her first horse, Joker, a retired track pony from Belmont Park.

Joker gave O’Hara “a little more experience and confidence [with horses],” she recalls. While under the tutelage of her jockey sister, O’Hara began volunteering to ride and train “problem horses,” those that wouldn’t be ridden.

When O’Hara moved back to the Hudson Valley, she initially supplemented her income by teaching downhill skiing and Aqua Kriya yoga, then began working at Silver Rock Farm in Rockland County, a riding school offering Infinity Equine Therapy for people with special needs. By the mid-2000s, she was coaching the US equestrian team for the Special Olympics. 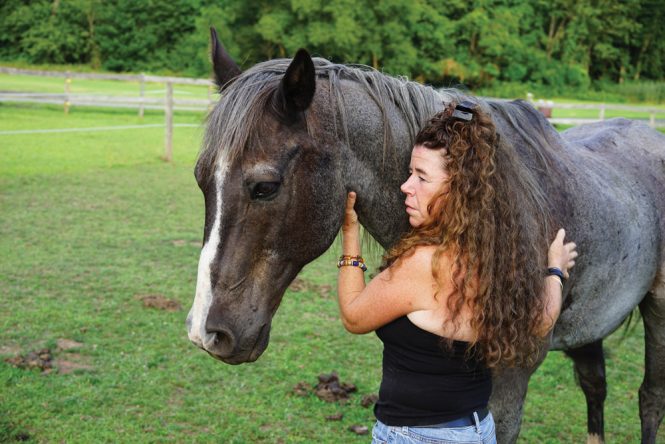 Meanwhile, O’Hara acquired six horses: a mustang considered too wild to ride, and five horses deemed “unadoptable” because of physical or behavioral issues (several of which were facing euthanization) from a Dutchess County farm. With a team in place, O’Hara seized the moment to form a nonprofit and take her vision of community-based horse therapy public, via a fusion of equestrian skills, the arts, and education.

Sunrays is comprised of three paddocks and some barn stalls on a seven-acre property O’Hara rents from the private, family-owned Lazy S Farm. The farm holds some small-scale programs on site, but much of its programming is conducted via a mobile horse unit, a trailer that typically brings two horses at a time out into the community.

Sunrays welcomes calls to venues like senior and group homes and recovery, veteran, and community centers, as well as to special events. The organization also works with school-age kids, including summer camps and after-school programs for local Girl Scouts and the Kingston City School District. These programs, O’Hara notes, build confidence not just in the kids, but also in the horses themselves. “They’re carrying little children around, and loving it,” she says. “These are horses that were termed unridable.” 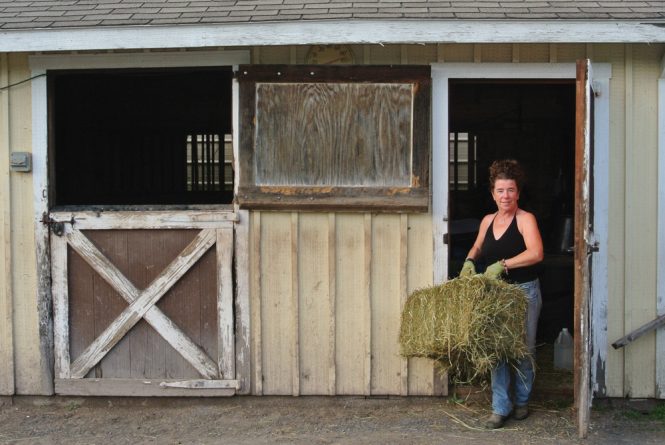 For Sunray’s six rescue horses—four mares and two geldings, including the “therapy pony” Tidbit—the second-chance setting has fostered their rehabilitation. Horses, explains O’Hara, are especially responsive to an interactive-based setting “because they’re prey animals, and they tend to be looking to humans for leadership and guidance.” In turn, she says, the horses are attuned to the needs of their human guests. “They always seem to just get it right. They just seem to know when to be calm, when to interact—just the right amount,” she says.

Sunrays’ mission is to cultivate “the human-to-horse relationship” among children and adults of all abilities and needs, says O’Hara. “Obviously, when you’re riding a horse it’s very physical, but it can also be emotional and even spiritual.” She customizes the programs to the particular group or individual she’s working with, starting each one “with an introduction about how to be safe around the horses and how to communicate with them in a language they understand.” However, she says, “I always leave room, and an open door, for a path that may take us in an unplanned direction. Work with horses is hard to predict and I like that we can allow for interaction and experiences that might not necessarily fit the norm or the original game plan.” 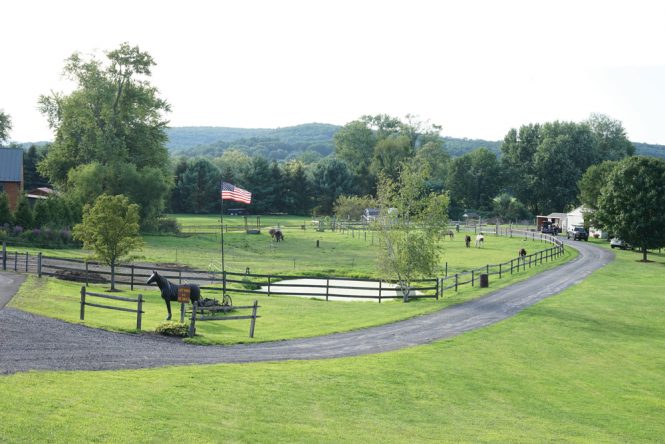 Participants are encouraged to roam the paddocks and walk around the animals. Simply being with the horses—whether through grooming, learning to communicate with them verbally and through body language, or riding—is the main thing. But often there is an arts-based component, too, like journaling while in the paddocks with the animals or horse-themed visual arts projects. O’Hara also encourages spiritual work, and welcomes local yoga, meditation, and Reiki teachers to lead group sessions among the herd.

This year, Sunrays’ summer camp hosted six to eight kids, one day a week, from Silver Rock’s larger stable in Rockland County. “From the start, the kids are given as much freedom as is reasonable from a safety perspective,” O’Hara says. The kids lead their horses from the turnout paddocks to the barn for grooming and tacking, then bring the horses to the arena for mounting and riding. 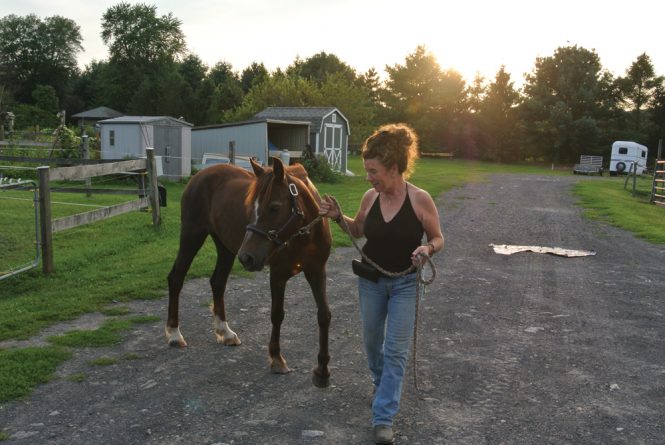 In the arena, the riders participate in a clinic, with each one doing something different in the same space, often switching horses or taking turns, and always peer-coaching each other. “Though we have counselors on hand to help, there is a big emphasis on them helping each other with all of these tasks,” says O’Hara. “This team work has been so effective in terms of building confidence for both the kids and the horses.”

Each week, camp ends with the horses grazing freely while the kids and counselors enjoy a picnic lunch in their midst. “As one of the Silver Rock counselors put it,” says O’Hara, “‘The kids come here just to be kids, and the horses get to be just horses.’ It’s pretty magical to watch.” 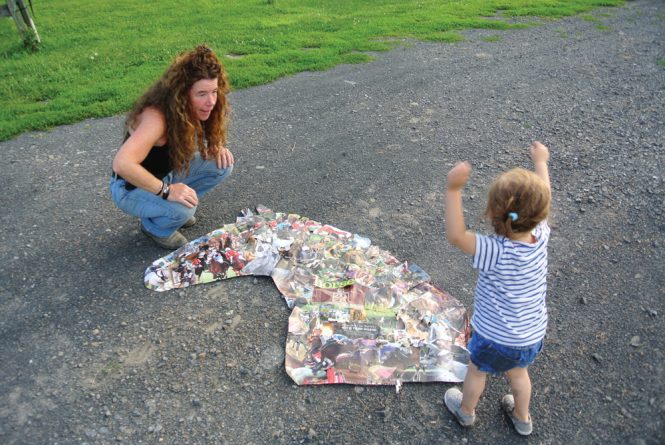 A one-woman show, aside from a small roster of volunteers and interns, Sunrays is largely self-funded by O’Hara, apart from small grants and donations. Although she aspires to someday open programs to participants free of charge, O’Hara currently charges a sliding-scale fee to offset expenses. She also independently offers traditional horsemanship programs, including training and pony or horseback riding, using that revenue to support Sunrays.

Ultimately, O’Hara says she hopes to have her own place someday, so that she “can really take the creativity to the next step.” A barn could double as a creative workshop, for instance, and she’d like to create a sensory garden for autistic visitors to stroll or ride through. But for now, Sunrays is more about experience than place. “It’s the moment of connection, the moment between them and their horse,” she says. “It just has to evolve, and when it does, it’s unbelievably powerful and certainly satisfying.”