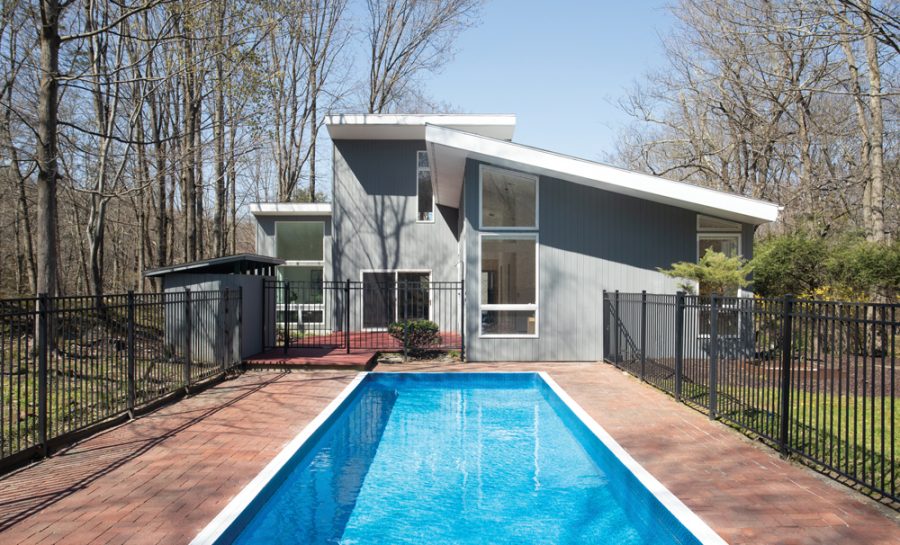 Artist and graphic designer Joseph Caroff commissioned the construction of his Lloyd home in 1985. He built a retreat that would both inspire creativity and serve as a backdrop for showcasing artwork. Caroff is best known for his iconic design of the James Bond 007 gun logo and the West Side Story film poster. His agency, J. Caroff Associates, created art for over 300 films, including classics such as Cabaret and Last Tango in Paris, and his hand-drawn lettering has inspired the creation of several typefaces.

Two decades later, when artist and entrepreneur Kira Karmazin purchased Caroff’s home, she was introduced to his architectural vision by the artist himself. Caroff told her that he wanted light to shine throughout every room. His architect positioned walls and windows accordingly, and the resulting open design, high ceilings, and floor-to-ceiling windows ensure that the 2,137-square-foot Contemporary home glows with an abundance of sunlight. 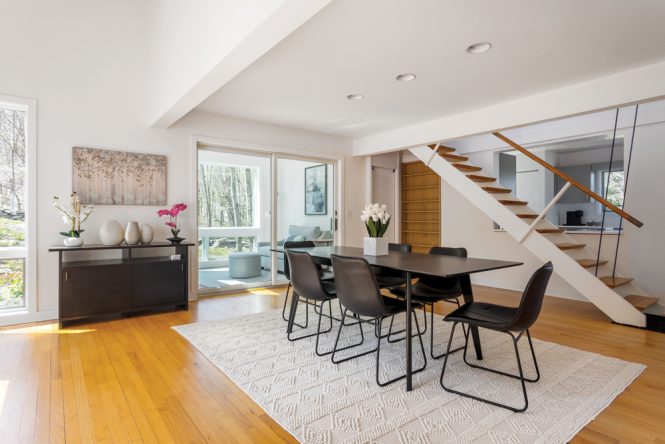 Designed for artist and graphic designer Joseph Caroff in 1985, this two-bedroom 2,137-square-foot Contemporary home in Lloyd is the epitome of a peaceful artist’s retreat, featuring plentiful windows that let in an abundance of natural light and plenty of space to hang artwork throughout.

“Every single room has light, and it streams throughout the house,” says Karmazin. “At the same time, the home was designed to showcase artwork. It’s extremely rare to find a home where you can display such large pieces among so much natural light.”

Situated at the end of a long private driveway, the two-bedroom home offers another much-needed quality for an artist’s retreat: privacy. The property’s four acres are richly wooded in oaks, maples, elms, and firs and the beautifully maintained grounds contain low stone walls, a seasonal creek, and a historic barn. A walk on adjacent Bellevue Road affords expansive Hudson River views. 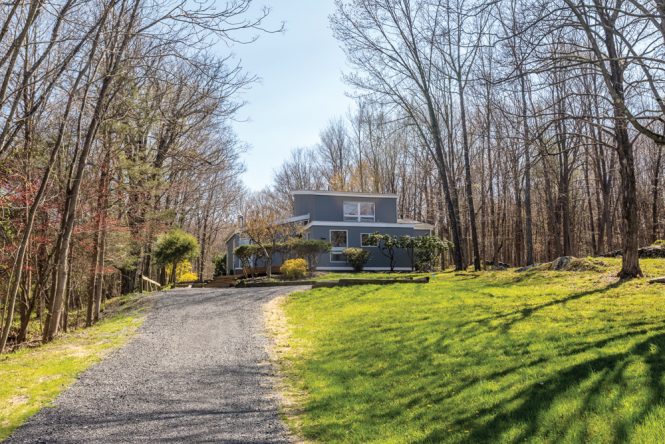 Designed for artist and graphic designer Joseph Caroff in 1985, this two-bedroom 2,137-square-foot Contemporary home in Lloyd is the epitome of a peaceful artist’s retreat, featuring plentiful windows that let in an abundance of natural light and plenty of space to hang artwork throughout.

The home’s surroundings are so forested and serene that it’s easy to forget that it is only a 15-minute drive to the Poughkeepsie train station and a short commute to New York City.

“It’s a magical property,” says Karmazin. “Whether you’re sitting at the kitchen bar looking down the lawn at the antique barn or seeing wildlife play in the front yard—it’s just incredibly beautiful and peaceful outside,” she says. “Even just walking through the house and feeling the sunlight come in is so special. Some of my favorite moments are waking up in the morning to the light streaming in.”

Karmazin has beautifully cared for the home, with any necessary renovations respecting its artistic integrity. As a result, Caroff’s vision has been meticulously maintained. “I wanted to bring things to current sensibilities,” she says, “while maintaining the original aesthetic vision of the house.” 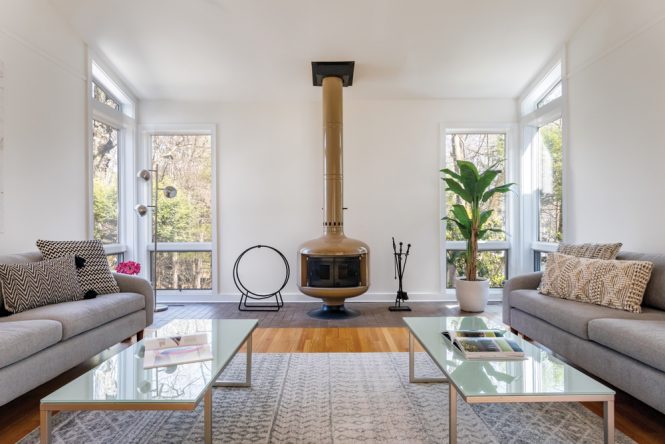 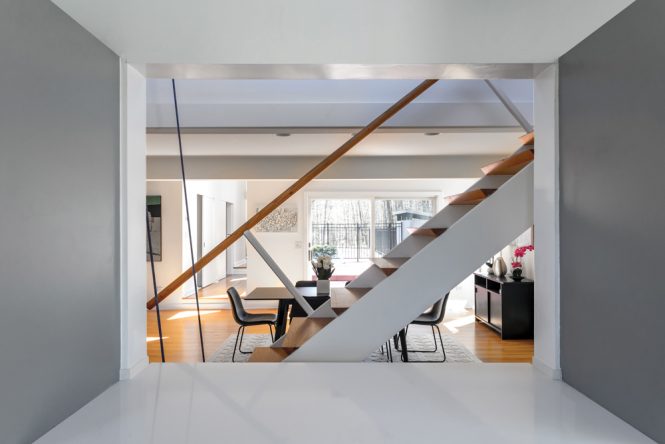 In the kitchen, she replaced the original elongated Formica countertops with a bright white granite that is more durable. Bathroom tiles were replaced with octagonal tiles of the same style in a soothing medium gray, while the bathroom vanities and mirrors were replaced with custom replicas. “The vanities were precisely designed to follow the original concept, because they were so utilitarian and perfect for that space,” Karmazin says. The house was also recently updated with smart home technology, including thermostats, doorbells, locks, and a sprinkler system.

One significant addition Karmazin made to the home was to ask New Paltz architect David Murray to transform a two-season garden room into an all-season sunroom in 2019. “Originally [Joseph’s wife] Phyllis had a garden room, and it was more of a spring-summer room,” says Karmazin. “It was such a spectacular space, but it was showing wear over the years, so I hired David Murray to redesign it using the same design principles of the original architect.” 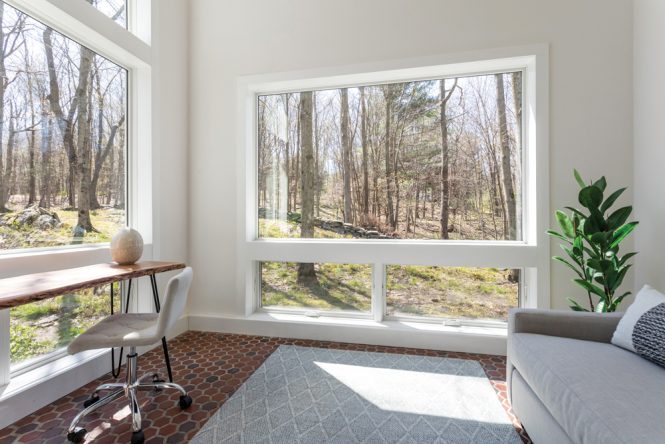 The resulting room is light, airy, and inspirational, featuring full picture windows on two sides of the space that open up the home to the outdoors and an overlook of the home’s spacious rear deck and fenced-in 40-foot lap pool. The sunroom was also upgraded with radiant heat. “The space is glorious,” says Karmazin.” It is one of my favorite places in the entire house. You can work from one area or just cuddle up and read a book. It’s a four-season cozy room.”

After buying the home, Karmazin continued to collect Caroff’s works, which she describes as both architectural and emotional. When she met the 100-year-old artist again recently, they discussed the artistic process. “One of the things he said was that creativity requires energy, and I feel that the house does that for you,” Karmazin says. “It has a restorative and inspirational quality. Whether you live there full-time or just part-time, it’s an energy source.” 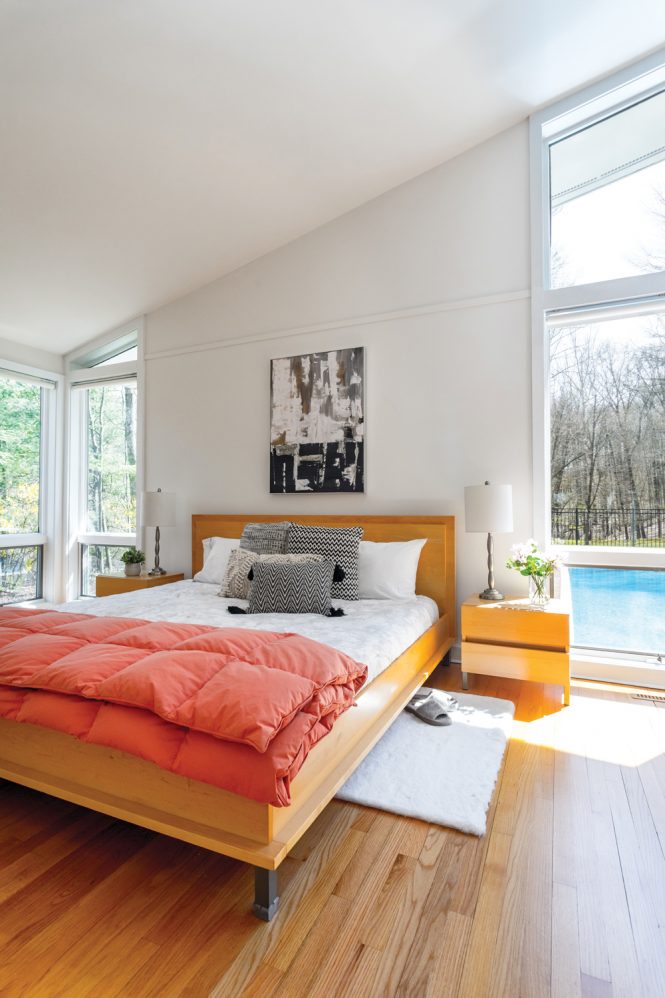 The home is a realization of Caroff’s vision to build a magical artist’s retreat, though you certainly don’t need to be an artist to appreciate its serenity and inspirational atmosphere. “The way the house is designed and the way it flows has the ability to lift your spirits, “says Karmazin. “It literally elevates your mood when you walk into the house. It’s something I felt when I walked into the home 20 years ago. I just felt different—it moved me.”

This spectacular two-bedroom, two-bath, 2,137-square-foot Contemporary is offered fully furnished and features bright, open spaces, high ceilings, and floor-to-ceiling windows sure to inspire. As in any artist’s home, light is paramount: Here, changing sunlight plays across light oak floors, crisp white walls, and the silver-gray theme of the elegant yet casual kitchen. The view from the kitchen bar encompasses a graceful lawn, sweet pond, and antique barn. Close to the Mid-Hudson Bridge and both MetroNorth and Amtrak train services to Manhattan, this lovely property can be enjoyed as a weekend retreat or full-time home (perfect for remote work and perhaps the occasional trip into the city for business or pleasure). While this property is very private, the social and adventurous will find much to explore nearby: farm-to-table restaurants, vineyards, orchards, Walkway Over the Hudson, Minnewaska State Park, the famed Shawangunks, vibrant college town of New Paltz, Kingston Waterfront, and other desirable Hudson Valley attractions.