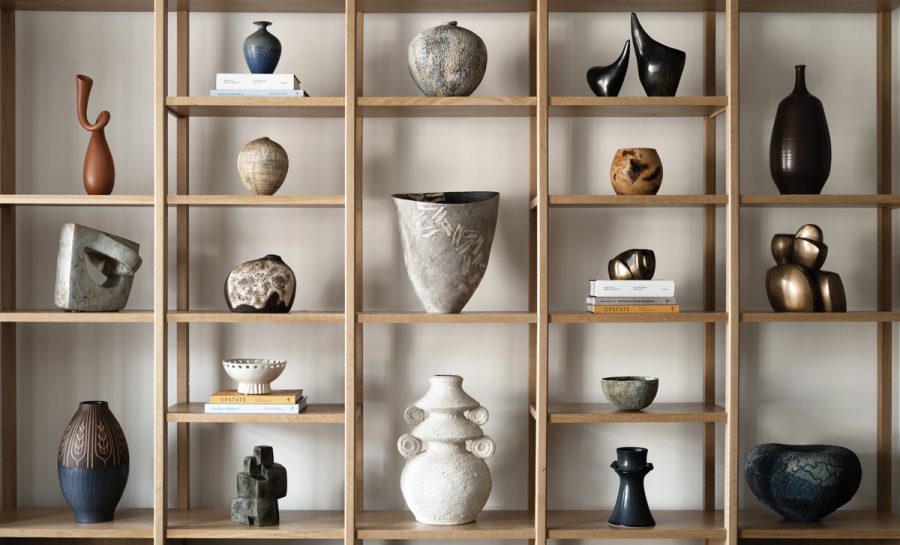 It only took a year working in finance for Julia Caldwell to realize she had art in her heart.

Caldwell spent her free time poring over art and design sites, attracted to functional pieces that exuded beauty, and figured that to succeed in the interior design field, it would be advantageous to get an advanced degree.

That didn’t work out either, because the program at the New York School of Interior Design focuses on institutional layouts rather than home work. So she dropped out. “My father was mortified,” she says. But he needed not worry: Her career as a curator of unusual household items is doing just fine. 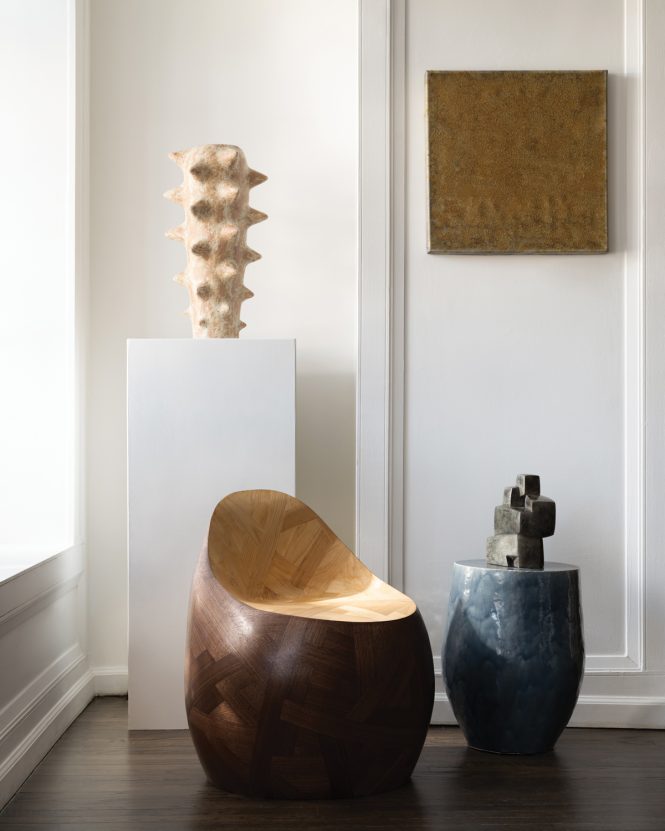 Caldwell learned the sell side of the business and became a private dealer, identifying artists and artisans who make furniture and other decorative pieces that fit her aesthetic.

After moving to Beacon pre-pandemic, she conducted commerce via a website and a storage locker. Then she spotted a cute storefront in Cold Spring with a cast-iron stairway and opened Studio Tashtego in May 2021, named for a character in the novel Moby Dick.

The whale harpooner Tashtego hailed from Martha’s Vineyard, as did Caldwell’s great aunt and uncle, who owned Tashtego home furnishings in Edgartown for almost 30 years. The shop makes a brief cameo in the film Jaws. 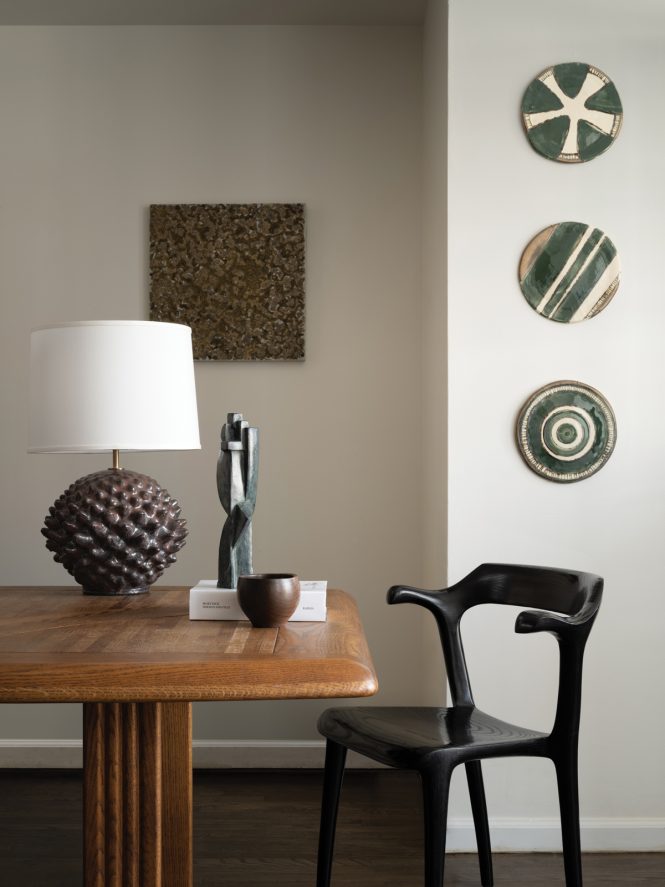 Everything about Studio Tashtego, the work, the website, the minimalist showcase space, the booklet of her first solo show as an artist—even the font Caldwell uses in emails—is classy.

Caldwell likes the word curate and performs the same function as a fine-art gallery owner tasked with finding creators who speak to her vision and presenting them beneath flattering lights. “I love things that convey movement, that are quiet, but strong and memorable,” she says. “I’m not the wackiest gallery out there, but there are sculptural elements to most of the works.” 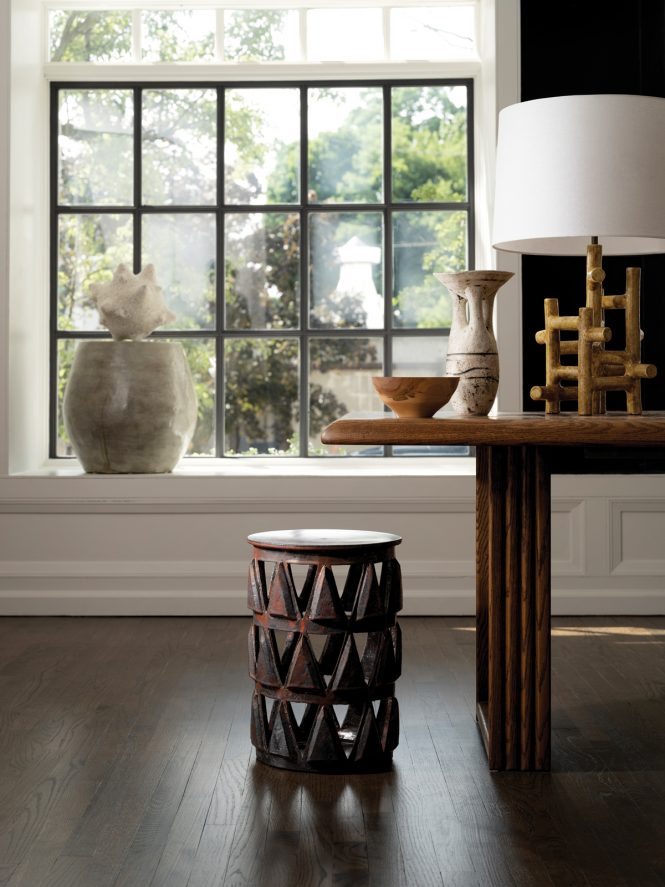 Her vision centers on off-beat ceramics, sculpture, and glass works, some of which can become lamps, corner tables, and lighting fixtures. She also carries tapestries and dense ceramic jewelry boxes. “I look for works that have an element of surprise, but that are compositionally balanced, sculptural and elegant,” Caldwell says. “I enjoy working with artists who are creating vibrant and elegant pieces that feature unique form, material, and texture.”

It’s possible to admire one’s visage in the Branch Mirror Bronze by Christopher Maschinot ($5,500), but the swirling, leafy sculpture that surrounds it may be distracting.

Placing a drink on William Coggin’s Extrude Side Table ($6,000) might lead to pondering its messy, textured coherence. Here, the vertical jumbles with the horizontal and not every stubby appendage underneath the tabletop reaches the floor.

Caldwell did quite well working with architects and interior designers online and in New York City, but decided to open a proper shop, figuring that the post-pandemic pendulum was swinging toward people itching to get out. “Brick and mortar is making a comeback,” she says.

An antiquated adage is that the camera never lies. But it can deceive. “In our industry, the things we sell have to pop on Instagram and grab someone’s attention, but with a lot of the best pottery, the glaze or the color can be subtle,” Caldwell says. “Japanese pottery is about texture and slight imperfections, which don’t pop. You have to see it and feel it.” 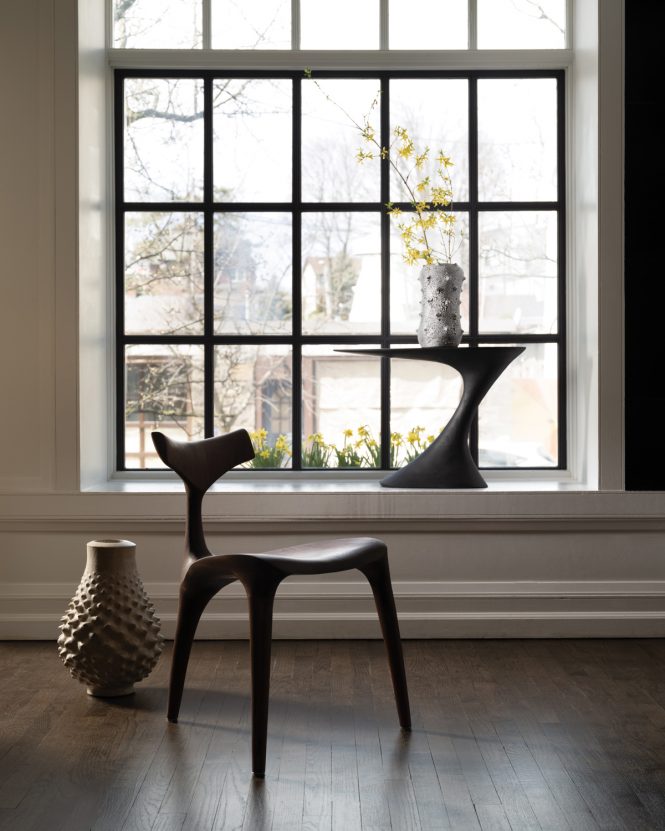 People may be comfortable buying an item just by looking at a photo online, “but you should sit on a chair or a couch to get a sense if it’s comfortable,” she says. “It’s the same with ceramics. Some pieces are far more complex to the human eye than to the camera.” And rarely do pictures depict the scale of a work. “I’ve bought many items based on a beautifully lit shot that turned out to be disappointing after I opened the box,” Caldwell says.

Studio Tashtego represents about three dozen artists and rotates their work. This past summer, Caldwell began presenting single artist shows that run for two months in a space that resembles a living room, sans television. “I try to make it feel homey, with music and a candle going to get the cozy in here,” she says. “Sometimes I go home and think, ‘I wish I lived at the gallery.’”

Despite her immersion in the world of fine design, Caldwell has only undertaken one interior project: Her house, and things are moving slowly. “It’s still a work in progress,” she says. “I started to collect pieces and decorate, which has been fun, but my preferred way is to do things over time. Maybe that’s my self justification for not having it done already.”