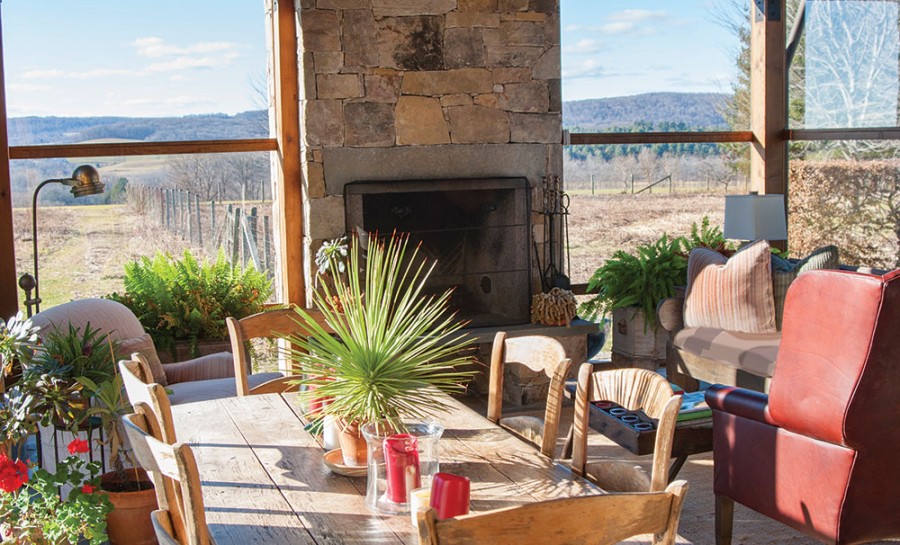 Trains don’t run through the historic district of Coleman Station anymore. The dairy farms tucked within this three-square-mile valley south of Millerton once supplied most of New York City’s milk. But the rail lines have been replaced by the Harlem Valley Rail Trail, and the remaining dairy farms now count among their neighbors a sheep farm, an upscale coffee roaster, and a curious house near Indian Lake that could be mistaken at first glance for another barn and silo. 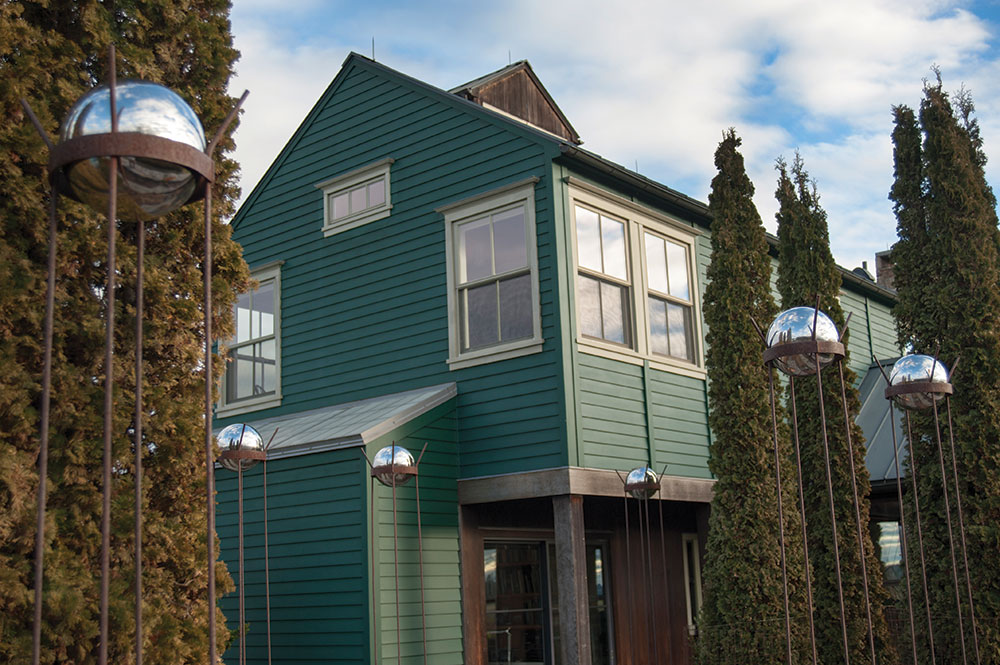 “There are a lot of nods to the historic architecture and barn architecture of the area,” explains architect and homeowner Larry Wente, “even though it’s a very modern house.” In the dining room, he reaches upward toward the dark timber beams, nine feet high. “Houses in this area from the 1700s tend to still have their original, small-scale timber frame,” he says. “I wanted to re-create that forced archaeology. So there’s a timber frame at the heart of the house. The wood was reclaimed from a barn nearby. It was the first thing that was built, just like a barn raising.” 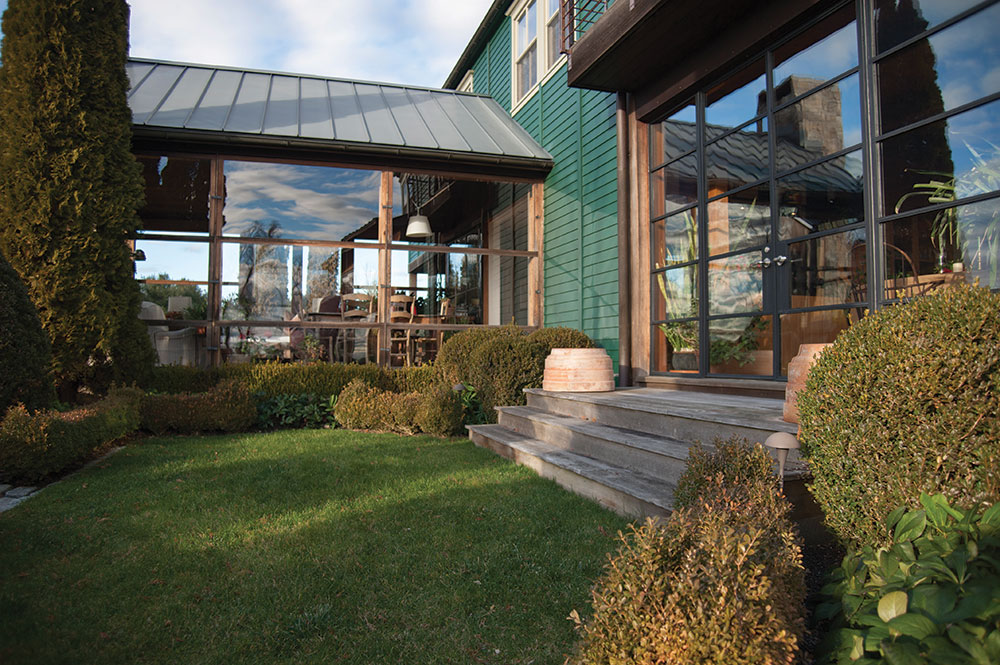 Wente, co-founder of the Manhattan architecture firm Gertler & Wente, and his partner, Jack Hyland, an author, investment banker, and board co-chair for Columbia University’s Teachers College, built the house in 2002 on a 40-acre lot. It’s been their weekend home ever since. (Previously, they spent 13 years living just down the road in a 1920s house.) Wente looked for inspiration from both local architecture and the land itself, noting how the mountains channel the winds and the quality of light changes throughout the seasons, before deciding how to maximize the property’s expansive views.

Just like the area’s original barns, the house was built on a north/south axis to block out the biting northwest winds of winter and draw in the cooling southwest winds of summer. “That’s our air-conditioning,” Wente says, pointing to the awning windows below the massive, southwestern solarium windows that line the living room. “They draw in the air, just like the other traditional barns in the area do, and then exhaust upwards through the tower.” 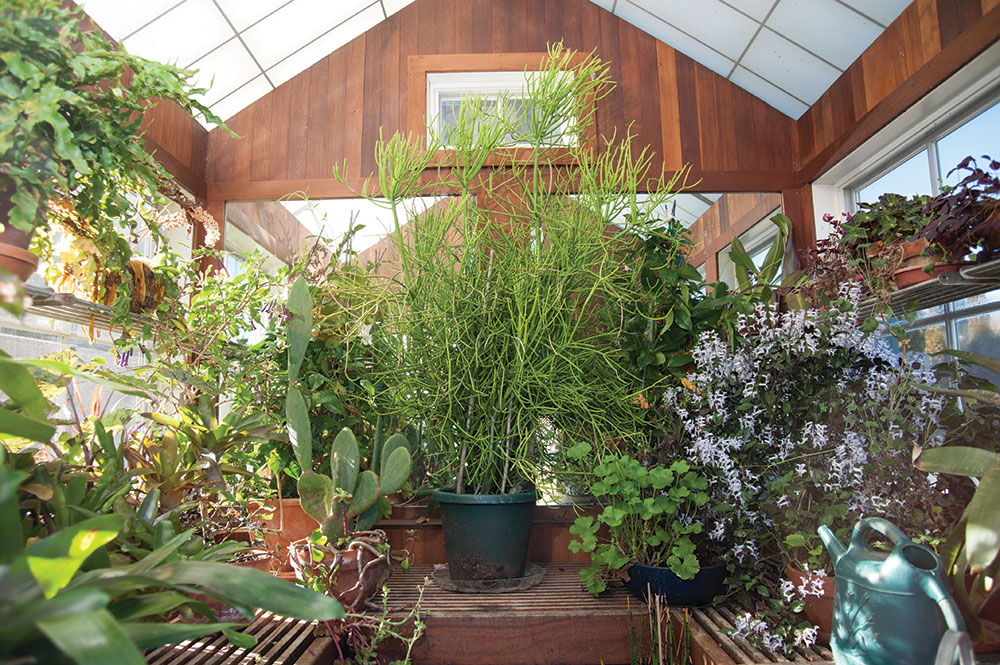 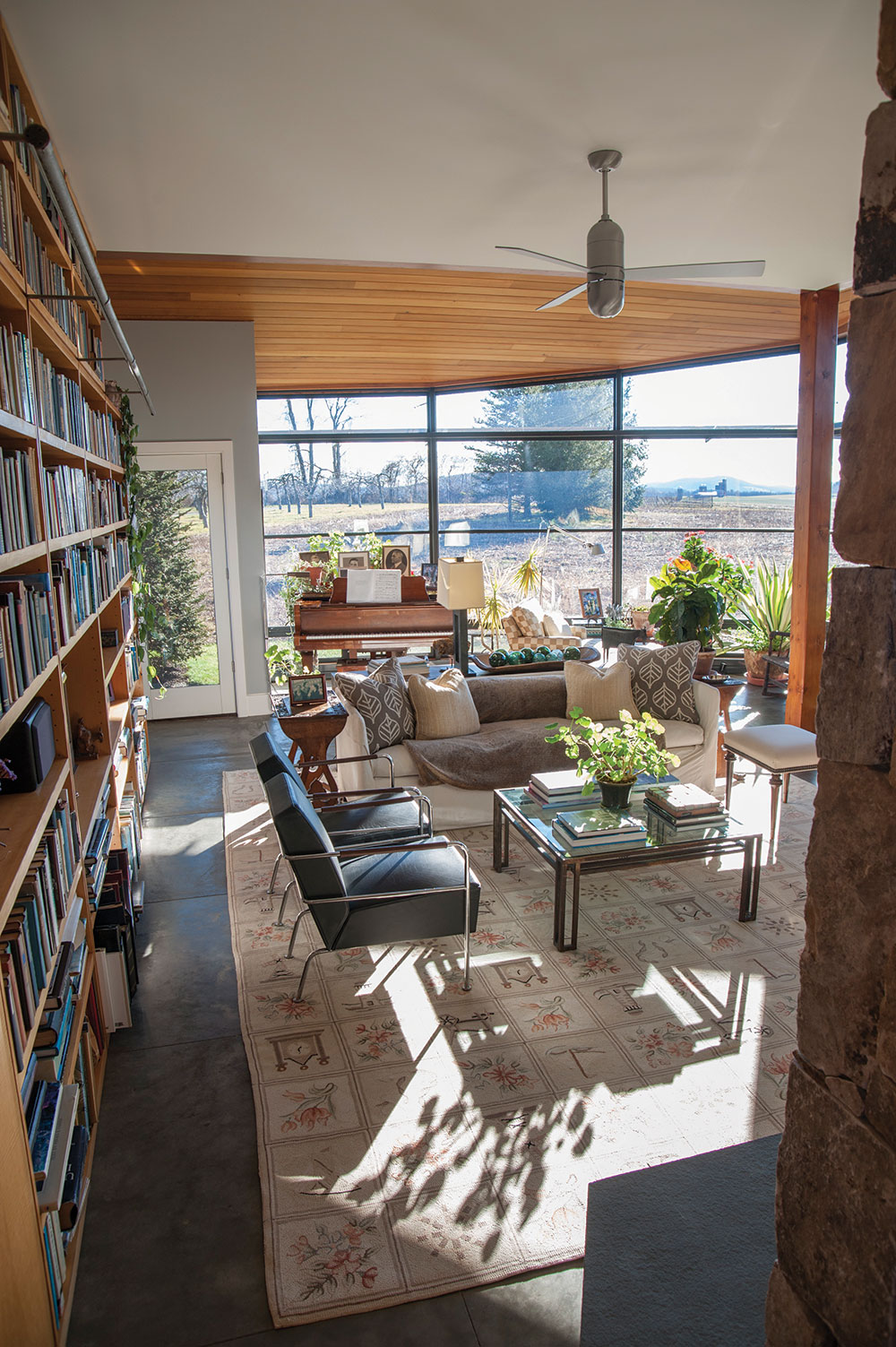 At the top of the 33-foot tower are several windows and a daybed. With three bedrooms; five bathrooms; and a one-bedroom, one-bath, 256-square-foot guest cottage on the property, it’s rare that the tower gets used for sleeping. Instead it’s utilized as a reading nook and indoor treehouse by the couple’s grandchildren. Wente and Hyland have had as many as 18 people staying over at a time, however. “Amazingly, it didn’t feel crowded,” says Wente.

The house is passively cooled entirely by wind, powered exclusively by a field of solar panels on the property’s northern edge, and heated by sunlight, fireplaces, and radiant heat. Its two fireplaces, on the sunporch and in the living room, are made of stone from a 400-year-old Connecticut quarry. The stones are laid in a manner recalling 18th-century Hudson Valley kilns. Salvaged stone and wood blend seamlessly with contemporary materials throughout the house, with the muted and natural colors soaking up the ambient light. 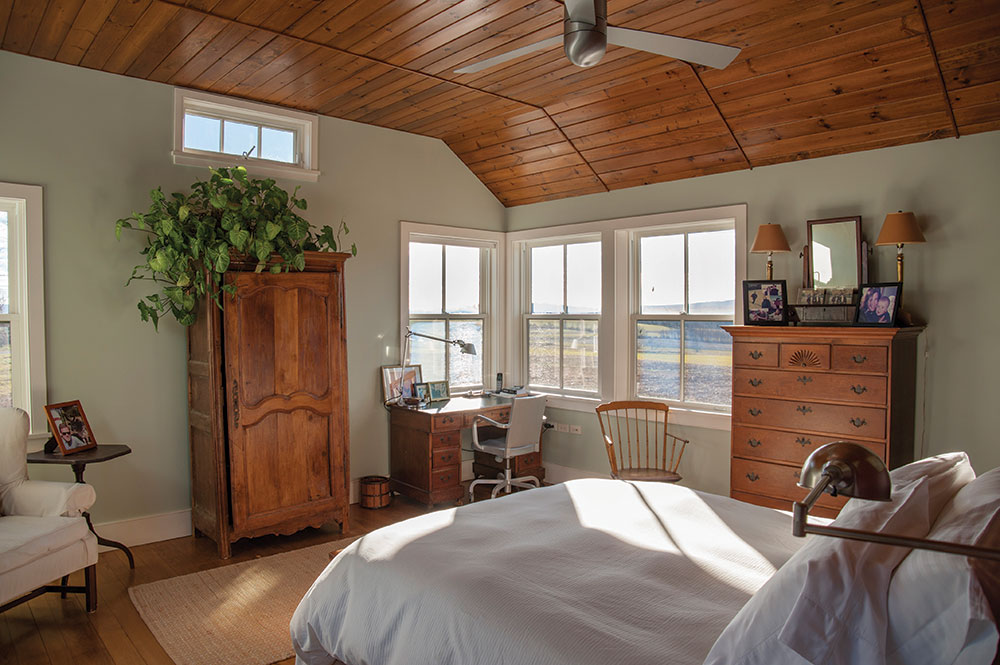 Wente designed the 2,980-square-foot house and surrounding garden using multiples of four as an organizing principle, and for efficient construction waste management. “Most building materials come in four-by-eight-foot sheets, or four-foot increments of structural lumber,” he says. “This way, the builders were using full sheets of plywood [and] sheetrock, and keeping the Dumpster empty.”

Each room has windows in at least three directions, taking full advantage of the light. The light’s daily journey through the house is what Wente and Hyland enjoy most about it, along with the way the house flows into the gardens outside, and the stone walls and pavilion-style windows blur the boundary between indoors and outdoors. 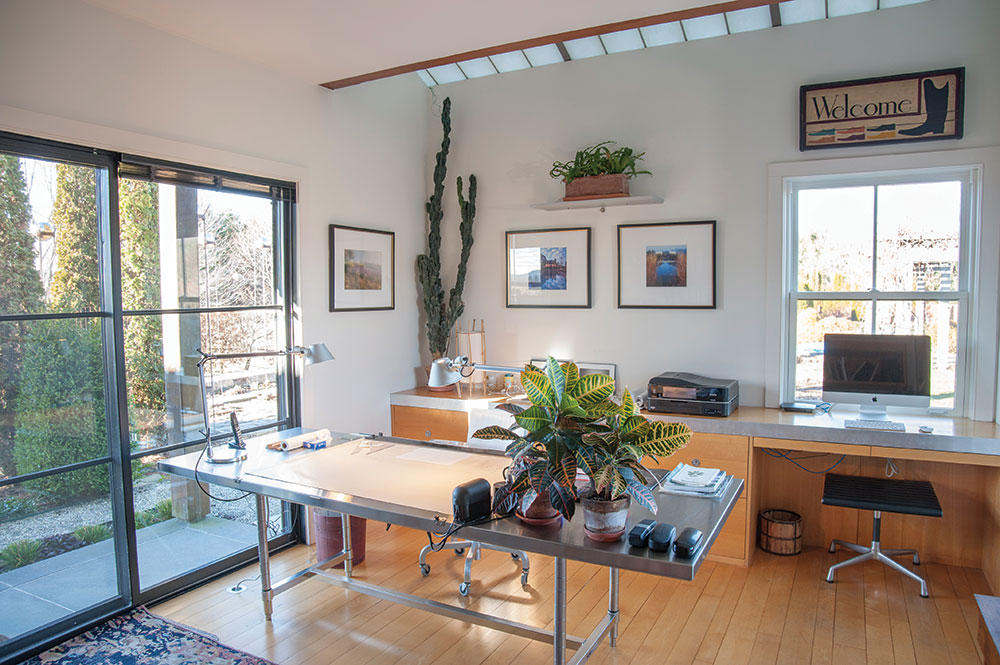 Maples, spruces, pines, and apple trees—all rescued from an abandoned farm nearby—surround the house, and in the summer, the grasses can reach 10 feet. But Wente admits to enjoying winter most of all. He likes looking out through the seemingly unframed pavilion-style windows at the frozen paths throughout the fields, the lonely benches no longer surrounded by walls of wildflowers that create outdoor rooms, the gnarled crabapple trees bereft of fruit, and the empty pool.

In the summer, Wente and Hyland host outdoor parties for over 1,000 guests, and while the house has seduced more than a few visitors, Wente isn’t about to re-create it for anyone else. “Someone hired me and wanted me to build this exact house for them,” he recalls. “In the end, it was completely different. This house wouldn’t work anywhere else.” 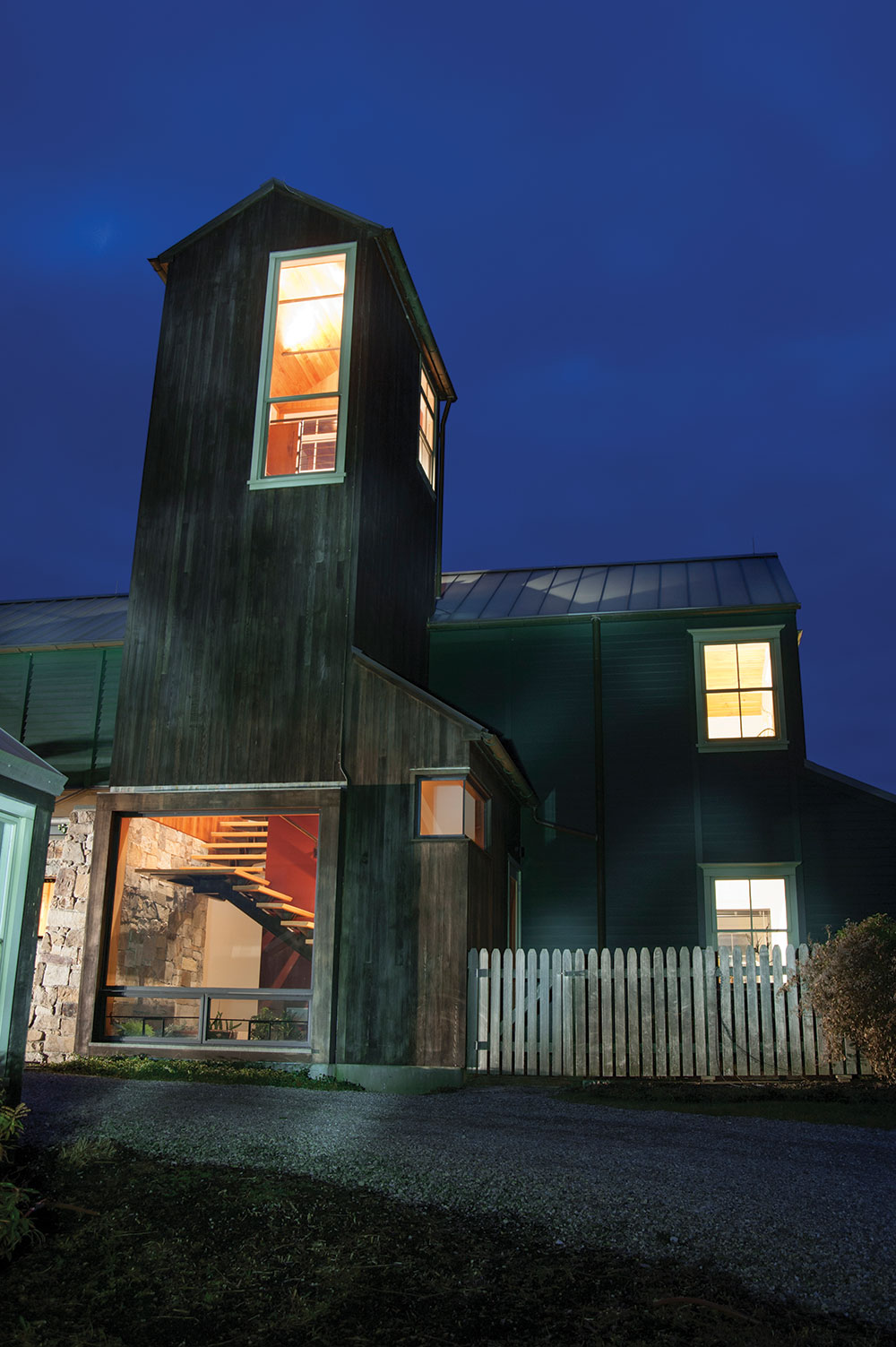