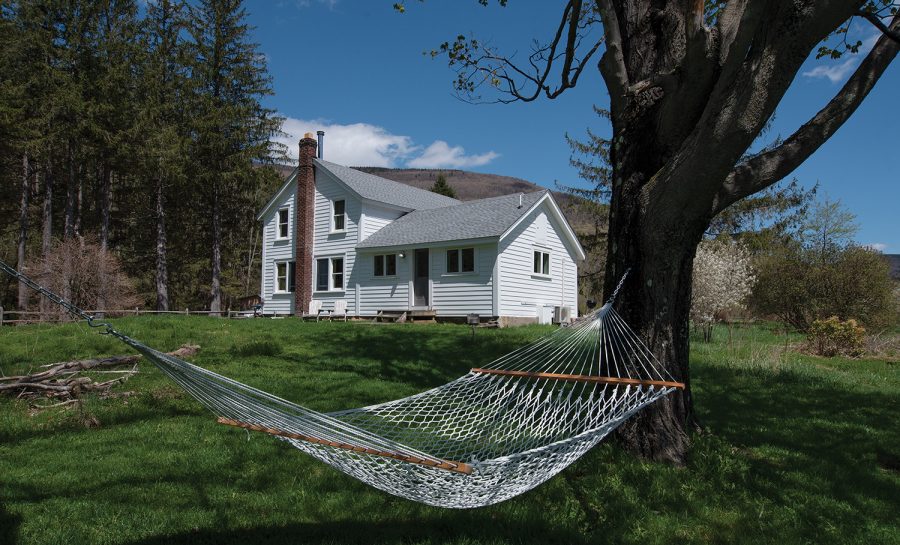 It’s a familiar story: A young Brooklynite couple moves to the Catskills and opens a hip guest house. But with the Spruceton Inn, there’s a twist: Writer and graphic designer Casey Scieszka and her husband, children’s book author and illustrator Steven Weinberg, originally planned to open an inn overseas. After spending a handful of years living abroad—in China and West Africa, they wound up in the Moroccan city of Fez.

“When we were in Morocco, I first had the idea of, ‘Oh, I really want to renovate one of those traditional courtyard houses and turn it into a small hotel,’” Scieszka says. “At that point, we were called back to the States for all the normal reasons.” (Think: family, money, work.)

They moved to Park Slope, Brooklyn, where Scieszka grew up, but the inn idea wouldn’t die. “We were like, ‘Okay, we’re doing the thing we’re supposed to do,’ and yet, something just didn’t feel right,” Scieska recalls. “And, just from the depths of some deep winter freelance despair, that running-an-inn idea bubbled up again. I thought, ‘I really wish I could do the Moroccan hotel in America because I want to be here.’ But then I had the very obvious realization that we do have hotels in America.” 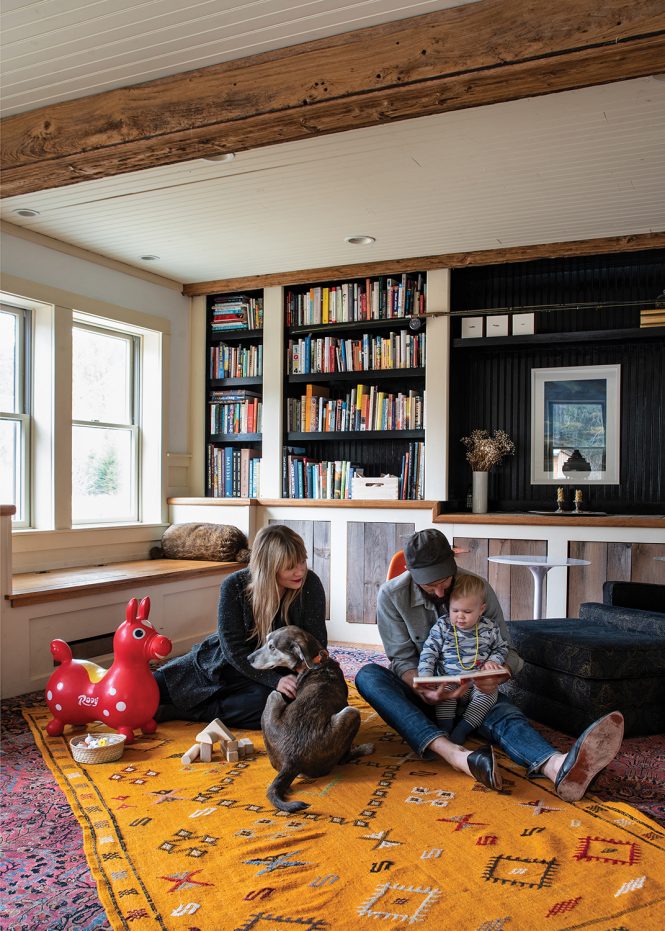 Scieszka and Weinberg with their daughter Amina and Waldo the dog in the living room of their farmhouse.

Weinberg, who’d grown up in Bethesda, Maryland, and missed the woods, suggested the Catskills, where the couple often went hiking. “That was a complete light bulb,” Scieszka says.

She began working at a Brooklyn boutique hotel to learn the hospitality ropes. She and Weinberg found the property in West Kill (near Phoenicia) in early 2014, and opened the business that summer. The inn is in the middle of Catskill Park’s protected land. In the 1960s, it was called Schwarzenegger’s Sunshine Valley House, and until 2003 it was owned by The Terminator star and former California governor Arnold Schwarzenegger’s cousins.

The couple spotted the property after looking at a nearby horse farm for sale. “We decided to keep driving down the road, because it was so beautiful,” Scieszka recalls. “Then we passed what is now our property, and did what everyone does to us, which is slow down, and say, ‘What is a hotel doing in the middle of that meadow? What’s going on here?’” 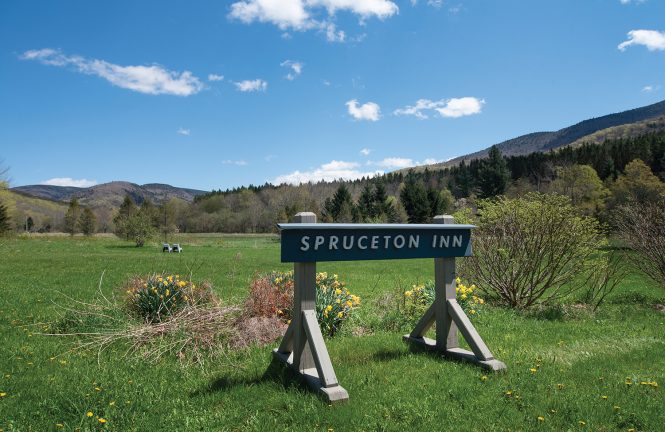 Spruceton Inn is situated at the edge of Catskill Park.

The property, then rentable by the week or season with optional meal plans, consisted of eight acres with a farmhouse, a strip of 10 motel rooms, and an old barn. The owners were running it as a seasonal inn for hunters when they got Scieszka’s call.

Thus began Spruceton Inn: a Catskills Bed and Bar. But what happened to breakfast? Well, there’s a commercial kitchen in the old farmhouse, but the couple planned to live there with their daughter Amina and Waldo the dog.

So they turned one of the 10 guest rooms into a lobby/bar/cafe. “We decided to go a little highbrow/lowbrow,” Scieszka says. “We serve very nice Café Grumpy coffee—single origin, yummy deliciousness—and then we have Pop Tarts.”

The motel required a major overhaul, with new plumbing and electric. The couple did as much DIY as they could and then called in the pros, whom they learned from “by following them around like curious children,” Scieszka says. 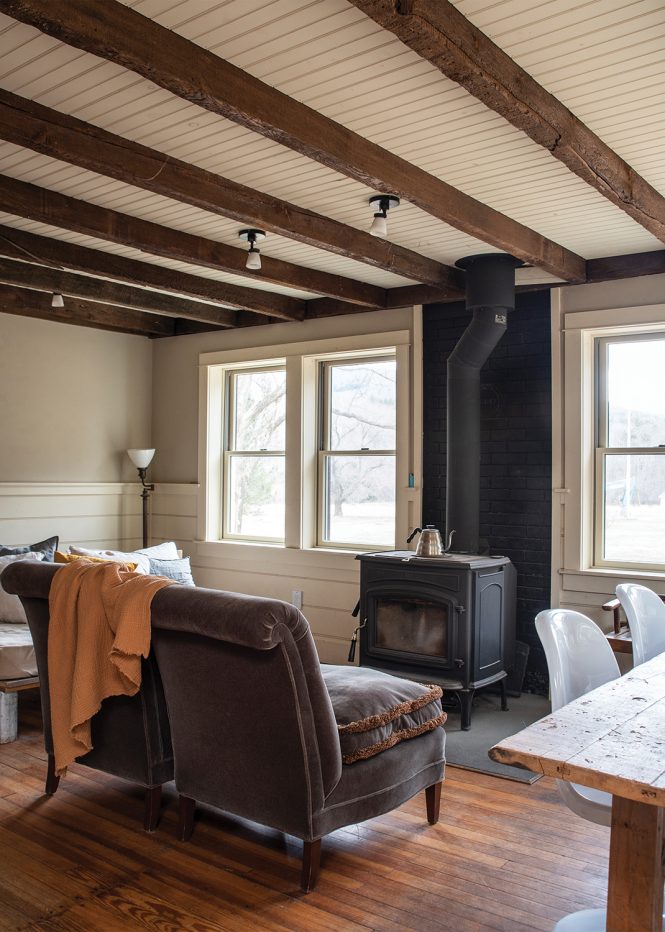 The rustic location allowed for straightforward decor, all about a comfy bed and views of the outdoors, where visitors can hike, lounge in hammocks, and cross-country ski.

“I really tried to keep it simple, knowing that what people were coming out here for was essentially the property,” says Scieszka. “We are five miles down a seven-mile, dead-end road, in a box canyon, surrounded by a state park.” The guest rooms, many of which include kitchenettes, are “minimalist and a little rough,” she says, featuring reclaimed wood and bedspreads made from canvas dropcloths.

“People go pretty hard on things like rugs and bedspreads,” Scieszka says. “I knew I didn’t want delicate things, not to mention that people are going to be traipsing in mud and snow and grass and all that. I want people to be comfortable, so all of our floors—and basically, everything—can be wiped down and washed. Even the carpets, from Mad Mats, are recycled plastic designed to be outdoor rugs, so we can hose them down.” 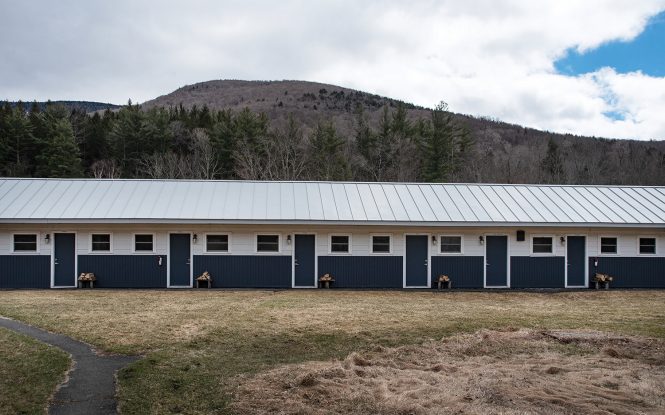 Most of Spruceton Inn’s nine guest rooms include an efficiency kitchen and have a view of a creek and West Kill Mountain.

The couple built the furniture themselves—bedside tables, benches, banquettes—using discarded barn wood and tree stumps. They opted against window treatments because “all the windows look out over a meadow to the creek and West Kill Mountain,” Scieszka says.

“That view of the state park is not going to change.” They painted “everything” white, she says, to make the rooms “as simple as possible for when you walked in. All you see are the back windows, almost like a painting.” Ikea clothes racks, globe lights, and folding chairs look sleek and modern. On the walls are framed vintage maps and Weinberg’s paintings.

The bar, called Conan’s Corner, “serves more as a tiny living room for the other nine rooms,” Scieszka says. It features stools, barnwood benches with cushions made from old linen sheets, outdoor rugs, and reclaimed-wood tables and shelves. There’s a Technivorm Moccamaster coffeemaker, and the beer taps are made from shed antlers found nearby at West Kill Brewing, whose beer Conan’s Corner serves. 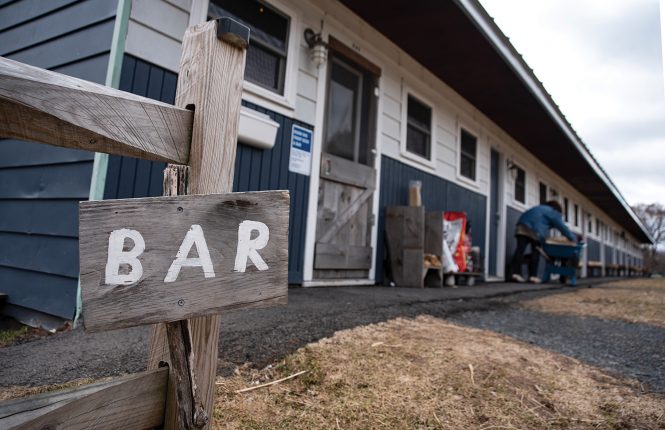 The bar is called “Conan’s Corner” and serves as a “tiny living room” for guests.

Once the motel was up and running, the couple tackled the farmhouse, removing its old linoleum, faux wood paneling, and carpets. “Naturally, it was about taste and budget and style, all Venn diagrammed in whatever possible way,” Scieszka says. “The stakes were a little less high since we were the only ones experiencing it.”

For the kitchen, their contractor built a table from hemlock beams found in the kitchen floor and one of the barn’s old doors; it’s surrounded with Vernor Panton chairs. Accents include vintage Fiesta Ware, wooden stools, and pendant lights (from Ikea in the kitchen and World Market in the dining room). The master bedroom is clean lined, with a handmade cabinet of reclaimed wood. The decor of Amina’s room is simple, too, with a tiger-striped bathmat and a watercolor painting of a fish by Weinberg, a veteran fly-fisherman, as focal points. Scieszka wallpapered the hallway with pages from a 1947 encyclopedia, using the letters S and W.

“Naturally, it was about taste and budget and style, all Venn diagrammed in whatever possible way.”

The 19th-century post-and-beam barn was renovated last. “It was a cool piece of history,” Scieszka says, but it was falling apart. The couple did most of the work themselves, pouring concrete to turn the goat pens into a patio, adding bathrooms and a service bar, installing black pendant lights from Wolberg Lighting Design & Electric Supply in Kingston; they left the hand-hewn hemlock beams and pine walls unstained. In 2018, the barn hosted 19 weddings, plus art shows, retreats, and dinners.

It’s easy to unplug at the inn. Only Conan’s Corner has internet, and there are no TVs. Since opening, the inn has hosted over 32 artists and writers for weeklong residencies; an exhibition of their work will be held this summer. 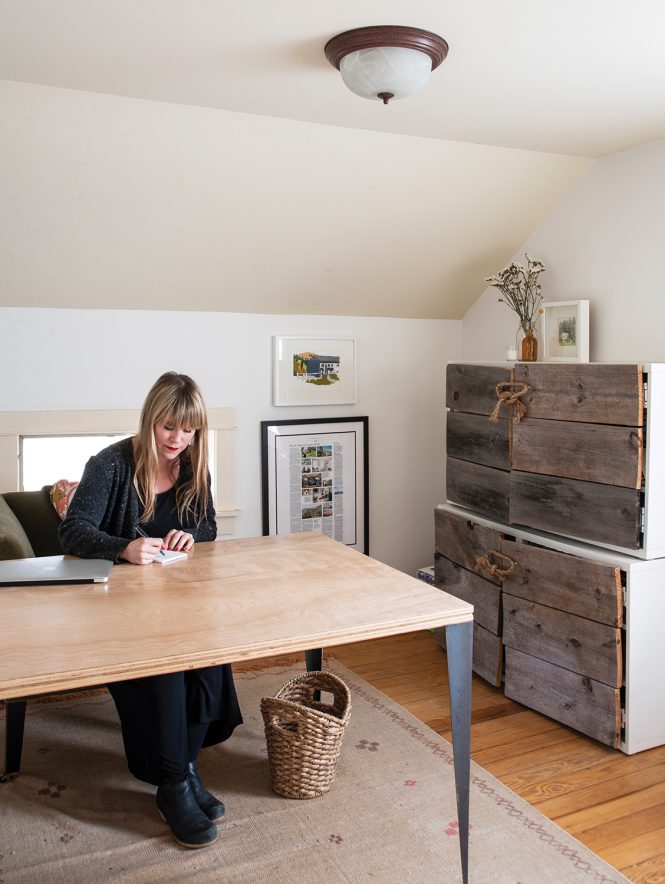 Sieszka at work in her office.

“There were so many parts about opening a hotel that fit with a lot of my interests—like hosting and design and travel and having my fingers in everything,” says Scieszka. “Basically, I really wanted to build a business from the ground up, something that I had a little more control over than I did in a freelance career.”

So far, she says, it’s mostly been fun. “That’s the thing about owning your own small business—you wear all the hats, which is exciting and wonderful and also completely terrifying and overwhelming at times,” she admits. “But I thought, ‘What do I want out of my day-to-day life? If I’m going to do blood, sweat, and tears building my own business, who is it that I want to spend all my time around?’ I want relaxed people having fun, looking for an adventure.”