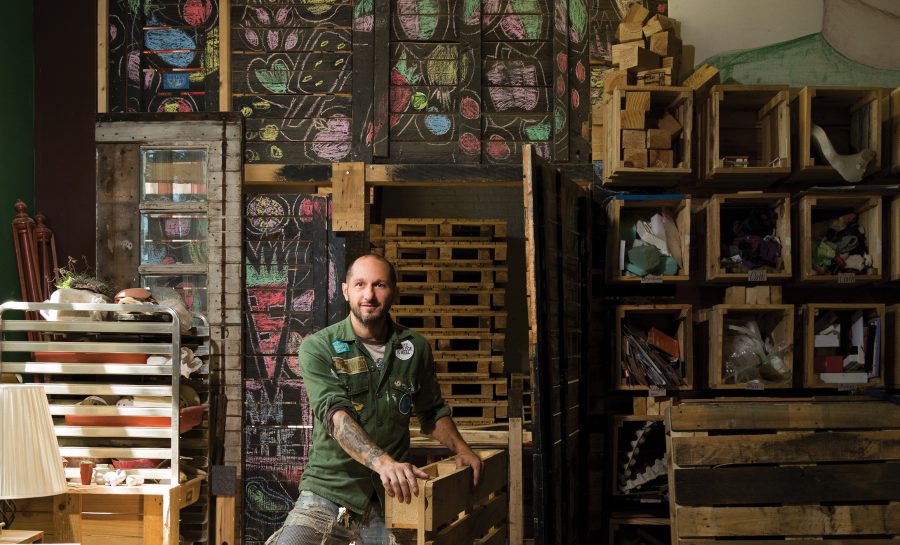 Furniture with a Conscience

Upcycling and DIY are more than trends—they’re expressions of environmental caring and, increasingly, components of an aesthetic movement  that’s being embraced by designers like Marco Anthony at the Green Palette in Kingston. Anthony’s designs are rooted in what may be the ultimate upcycle move: turning roughhewn shipping pallets into eye-catching cabinetry and furniture that’s as green as it gets. The look resembles reclaimed barn wood, but the price does not.

Anthony is a former corporate designer gone rogue. After studying sustainable design at the Fashion Institute of Technology, he worked at Crate & Barrel and Restoration Hardware, but was frustrated by the strategy of planned obsolescence and the use of medium-density fiberboard (MDF)—which he describes as “sawdust bound together with toxic glue made from formaldeyhyde and urea”—in mass-market furniture. MDF is notorious for chipping and breaking down, handling moisture poorly, and off-gassing carcinogenic formaldehyde when improperly sealed.

“I just couldn’t swallow the hypocrisy,” Anthony says. “They wanted an appearance of sustainability, but didn’t really care about where anything came from or how it was made. They’d even tell the manufacturer to take pieces out. I’d say, ‘But it’ll fall apart,’ and the response was, ‘We’re not building it to last, we’re building it to sell.’ Eighty percent of what the big stores sell is MDF.”

Anthony wanted to make better, more creative products. “I come from an architecture family,” he explains. In fact, he happens to be the grandson of the late, internationally acclaimed architect Raul Campos. “I was eight years old, building a house out of cardboard,” he recalls, “and [my grandfather] came over to me and said, ‘You are going to be an amazing artist one day.’ That stuck with me.”

In 1992, while studying at FIT, and working as a decorator for Harrow’s home goods and maintenance stores, a Christmas decorating gig led Anthony to fall in love with the trash-to-treasure concept. One day he ran out of garland for a restaurant and panicked. “I saw these workers throwing out garbage bags of fake Christmas trees,” he recalls. “I asked to keep them and began cutting all the branches from the trees and making a garland out of it. When the job was done, the owner said he’d never seen a garland as beautiful as that. I smiled and kept the secret to myself. From that day on, garbage and I became best friends.”

In 2007, Anthony ditched his corporate career and began designing and importing pieces made from reclaimed teak. But when the economy nosedived, importing his designs—even in reclaimed teak—was no longer a sustainable business model. He found himself drawn to the ubiquitous shipping pallet. “I saw pallets being thrown out and thought, ‘What if I made simple modern designs from this wood?’” he says. “I could sell them at a similar price point to IKEA’s, offer genuine sustainability and better quality. Too often, people are expected to pay a thousand dollars more for something ‘sustainable.’ Who has that?”

Shipping pallets, whose standard size is 48”x 48”, are mostly made from southern yellow pine or oak scraps, making pallet wood MDF’s polar opposite. “A lot of people have heard it’s chemically treated because it used to be sprayed with pesticides—that’s illegal now, and any pallet stamped ‘HT’ is heat-treated and chemical free,” Anthony notes. “Pallet wood has enormous character. It’s a stubborn wood, it wants what it wants. No carpenter who needs everything 100 percent square and level wants to bother with it—it breaks every rule, it’s got nails, the depths and thicknesses vary. But the finished look is so beautiful. I think my favorite stuff is the cabinetry—it’s got more variation in tone than the expensive, reclaimed barn siding everybody wants. A bricklay pattern in pallet wood is just so gorgeous.”

In 2012, Anthony opened the Green Palette in New Paltz to. At first, he only created walls of pallet art. Six months in, he began making pallet furniture for sale, converting the shipping crates into benches and tables, but not many sold. So he began making marquee letters out of pallets, installing lights in them, and posting them on Etsy. “We started getting sales left and right,” he says. The platform beds sold well too. In the past five years, he’s made everything from cabinetry to outdoor sectional sofas. 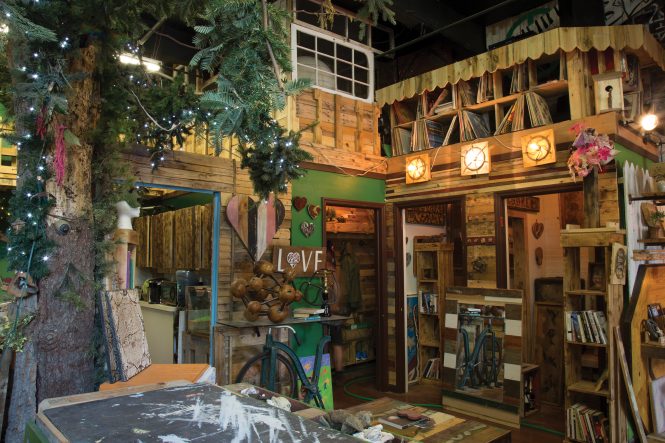 Before upcycling, pallets must be deconstructed and sanded, a time-intensive process. “The thing about pallet furniture is there is a lot of work in recycling the pallet to use again,” Anthony says. “We typically don’t charge for that service, but when we do large volume it works against us. So we’re scaling back our business to create one-of-a-kind furnishings, like art itself. We can’t do mass production because the labor costs exceed the retail cost of our products.”

Now housed in a repurposed brush factory on Kingston’s Greenkill Avenue, the Green Palette offers workshops in creating pallet furniture, birdhouses, signs, or whatever a customer can imagine. “You can bring me a coffee table design you saw on Pinterest or dreamed up or whatever,” Anthony says, “and I’ll give you a price to make it from pallet wood—let’s say $300—or you can come and spend three hours working on it with me. I supply tools, materials, and expertise, and you’ll have your table for $65 and have learned something besides.”

For inspiration, and to keep customer’s kids busy, the shop features an indoor treehouse, puppet theater, and DJ booth—all made from pallets, of course. This fall, Anthony is debuting carpentry-based math workshops for kids. “Math is art and art is math,” he says. “You gain a visceral and visual understanding of fractions and geometry from working with wood.”

You can find Green Palette products on Etsy and Instagram, where Anthony has over 22,000 followers, and he is in discussions with HGTV producers about a reality show, tentatively titled “The Adventures of Pallet Man,” that would allow him to showcase his methods and philosophy. “I have an old Army uniform covered in peace-loving patches, and the nametag says ‘Pallet Man,’” he says. “It’s all about applying that recycling concept to absolutely everything we do, figuring out new ways to learn from it.”