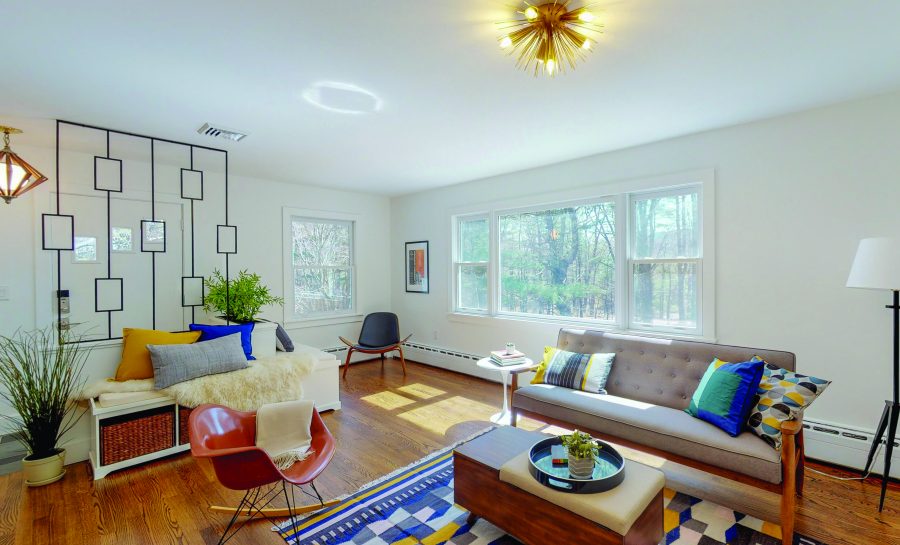 When the current owner first saw her ranch tucked away on five wooded acres off Cooper Lake Road in Woodstock, her heart sang. “It had some distinct Midcentury Modern touches and an amazing sunny energy,” she explains. “And of course, the land was beautiful: You are close enough to neighbors to not feel isolated, but never have to see anyone if you don’t want to.”

She and her family had been Bearsville-based weekenders since 2013 and already owned a farmhouse, but they fell in love with the four-bedroom, three-bathroom home and the surrounding landscape. Owned by the same family for years, it was well cared for but in need of both restoration and modernization. They couldn’t resist the challenge of updating the space and making it a haven for their young family, while staying true to the home’s Midcentury roots. 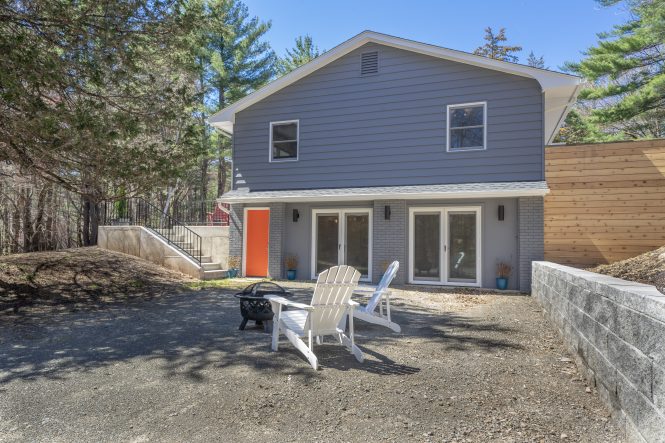 The exterior of the renovated ranch property in Woodstock.

They knew to make the home more comfortable they would need to open the flow of the main living space. Working with New York City-based architect Audra Manzano, they began by removing walls from the main living area, reconfiguring the space into an open-layout kitchen, front entrance, dining area and living room. With the help of local contractor Tom Mayone of Mayone Building and Contracting, they preserved the original walnut cabinetry in the kitchen as well as the original walnut built-in sideboard in the attached dining area. They complemented the original touches with all new appliances, blue tiling, and quartz countertops in the kitchen. They restored the home’s original hardwood flooring throughout the main level except at the entrance, where they added new bluestone floors.

Throughout the home, the windows and doors needed updating. The couple took the necessary renovation and turned it into an opportunity to expand the sense of openness even further. They replaced the windows throughout the entire house, adding two picture windows with views to the Catskills in the living room and one of the bedrooms. They reimagined the front entranceway with double French doors. Outside, at the home’s entrance, the family built a new cedar deck and added a cantilevered awning above the French doors. They also installed custom ironwork throughout the property.

“We wanted the awning and ironwork to reflect the Midcentury Modern design,” the owner explains. They installed iron railings along all the staircases as well as a decorative ironwork panel in the living room.

The owners then expanded the house with an eye toward luxury and family-friendliness by finishing the lower-level walkout, bringing the home’s total area to 2,500 square feet. Downstairs, they created a large family room that opens to the outside through two sets of newly installed French doors. They also added an office to the downstairs space, as well as an additional bedroom and a bathroom, which is finished in marble.

“The family of turkeys that wander around is a bonus.”

With their children in school in New York City, the family isn’t able to spend as much time in the house as they did when the kids were younger. “We decided we would rather sell the house and see it actually lived in,” the owner explains. Even though they thoroughly modernized the home, they were always careful to maintain the integrity of the surrounding landscape.

Like its Midcentury Modern design, the five acres of woods have been well preserved. “The family of turkeys that wander around is a bonus,” the owner says.