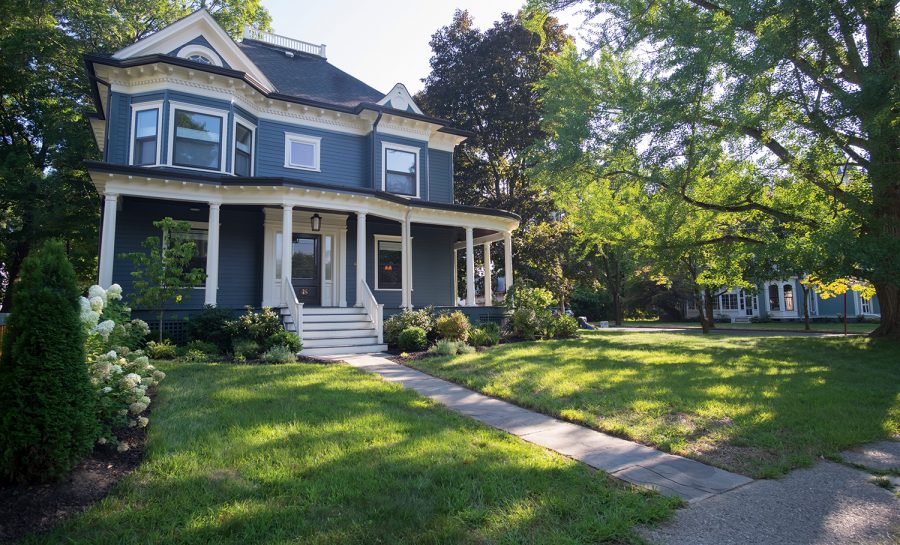 Ginkgo House, in the village of Rhinebeck, is so named for its towering, centuries-old tree. “A lot of people know this house because this [intersection] is very well photographed, with somewhat grand houses on all four corners,” says Maya Kaimal of the residence she and her husband, Guy Lawson, bought in 2016. Built in 1895 by Augustus Quick as a gift for his fiancée, Cecelia Schryver, on land owned by her farmer father, the house’s classic Victorian features include a wraparound porch, widow’s walk, bay windows with reading nooks, elegant parlors with pocket doors, and fretwork trim. But when Kaimal and Lawson bought the house, it also—true to its era—had few bathrooms; a smallish, dark kitchen; and a gloomy basement.

“We looked at the house and thought, ‘There’s so much to love here,’” says Kaimal, a chef, cookbook author, and the founder of Maya Kaimal Fine Indian Foods. She and Lawson, a journalist and author, worked with New York City-based Studio Fōr founder Fauzia Khanani to fill the house with light and make it more user-friendly (the family includes twin teen daughters and a big dog). “We wanted to respect the history, rather than making some big statement,” Kaimal says, “but we didn’t want a fussy, perfect period house. We wanted a functional house that honored the period it was built in.” 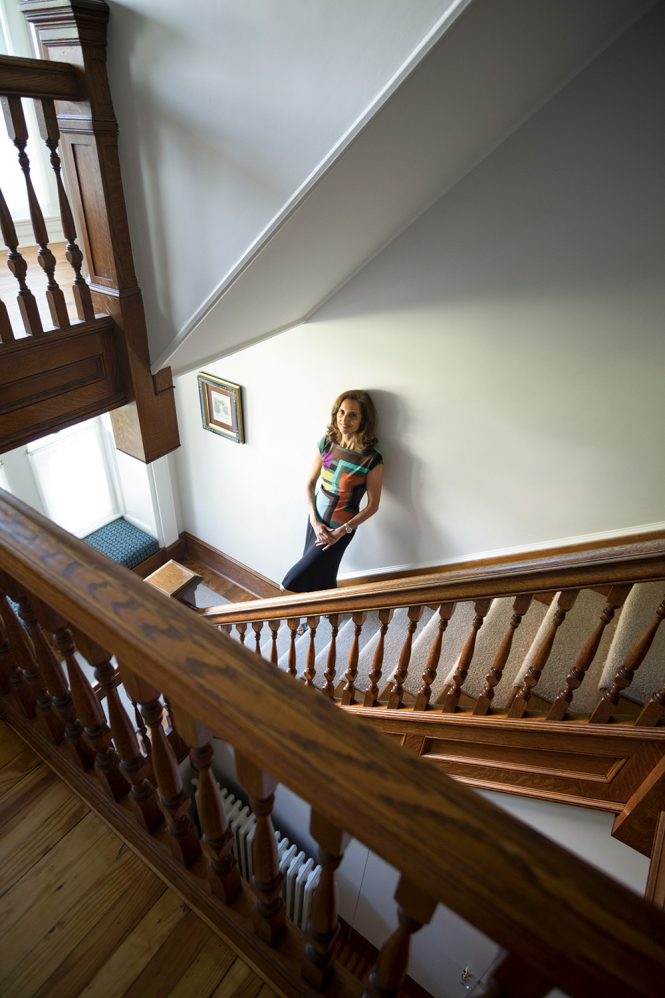 Owner Maya Kaimal poses near the reading nook on the landing.

Khanani agreed: “We had no intention of turning it into an ultra-modern house,” she says. “Maya and Guy wanted to retain as much of the old house as possible, but gave us the freedom to incorporate modern design as well.”

“The thing I wanted to do in the house was bring in color,” says Kaimal. Rich colors, she says, “have a happy feel. I wanted to bring some of that into this house, too.” Khanani helped find a balance to avoid being “too bold” by opting for boldly colored walls and accessories (decorative plates, cushions, art). With the furniture, they chose to “step back and be more about texture,” Khanani says. “The rugs are more muted, too.” 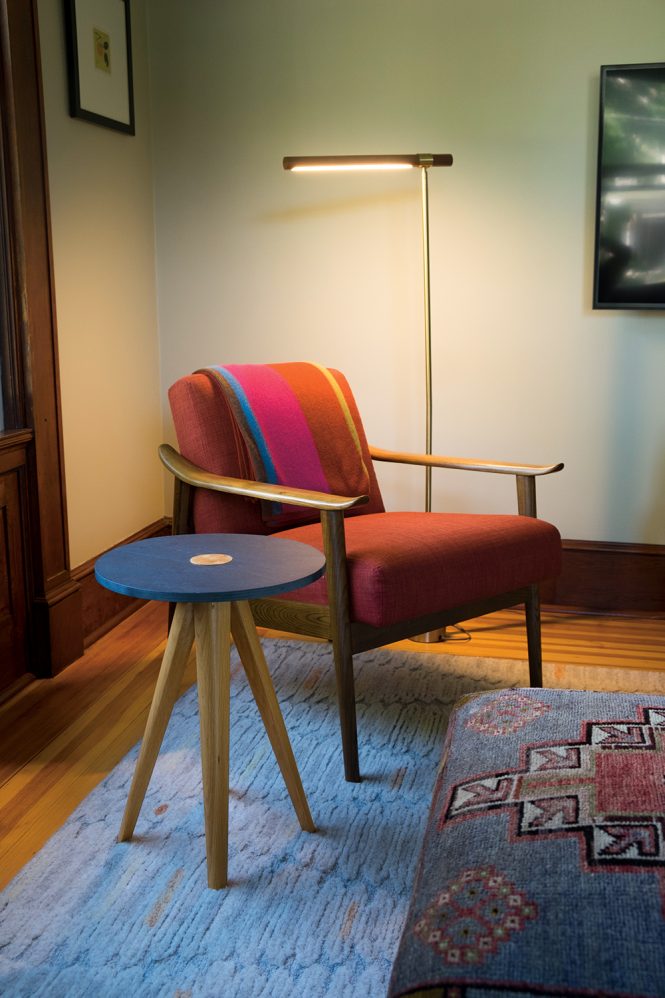 Initially, the sea green paint of the dining room “terrified” Kamal, says Khanani, “but she was willing to take the risk.” They lightened up the dark wood trim with white paint. An array of Indian and Moroccan plates pick up on the color scheme. The table, chairs, and light fixtures have modern lines.

“Textiles are a passion of mine,” says Kaimal, who found some of the house’s brightly patterned fabrics on trips to India. In the staircase, Khanani noticed the bare window seats. “I said, ‘You have young daughters, and they clearly love reading. Guy’s a writer, too. [His book Arms and the Dudes, the true story of two young men who won a $300 million contract from the Pentagon to arm America’s allies in Afghanistan, was the basis for the recent film War Dogs.] These should be really amazing window nooks where you can sit and read.’” Kaimal agreed. The nooks are filled with cushions. A Sputnik-y lamp and pieces from the couple’s eclectic art collection—Australian Aboriginal art, Japanese prints, and friends’ photographs—tie everything together. The original spindly woodwork remains. There was no bathroom on the main floor, so Khanani tucked one under the staircase with a hidden door. 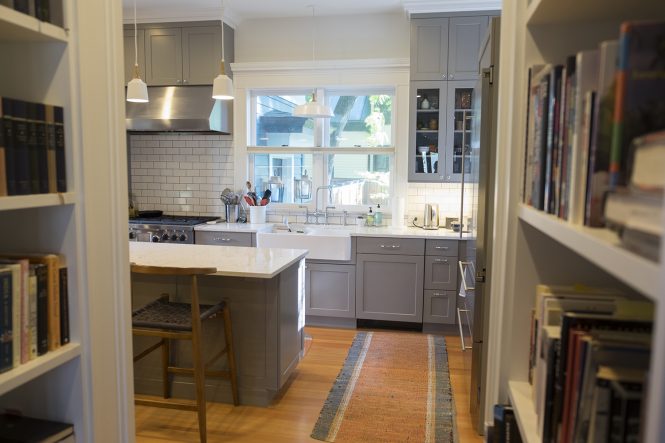 The kitchen is both the heart of the house and Kaimal’s recipe-testing space.

Gingko House’s former owners—three generations of chiropractors—had removed bay windows to add an entrance to a dark-paneled basement office space. “For me, that was clearly not part of the original design,” Khanani says. “My thought was to get rid of that and bring the house back to what it was—we’ll put the bay windows back and have light flooding down into the basement.” The basement became guest quarters, a laundry room, and a den. The basement stairs were shifted to the kitchen, which roughly doubled in size, and a mudroom and deck were added. “Guests can come in through the mudroom and go right downstairs,” says Khanani.

The new design makes the kitchen central. Kaimal has written two cookbooks, Curried Flavors and Savoring the Spice Coast of India, which explore her South Indian heritage (her father is from Kerala; her mother is a New Englander). In 2003, newly married to Lawson, she started a line of Indian simmer sauces. 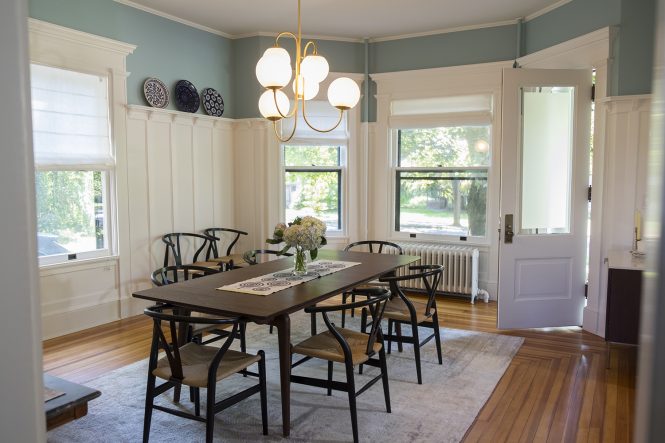 The dining room’s sea-green walls and white wainscotting brighten up the dining room and give it a “happy feel,” says Kaimal.

“Food is a big part of their family life,” says Khanani. “Everyone hangs out in the kitchen and it is really the heart of the house for them. Often, Maya is cooking and testing out new dishes on weekends.” The appliances are professional-grade and the cabinets are traditional, but “in a really soft gray that’s not of the period.”

The new design also contains some elements of the home’s previous owners, including their antique living room chairs, which Kaimal bought. “That felt like a nice piece of continuity,” she says. Everything else is an “eclectic mix from all sorts of sources.” They continued the sea-green walls from the dining room because the wraparound porch shades the room. “Now, you would not notice that it’s not a bright room,” Kaimal says. 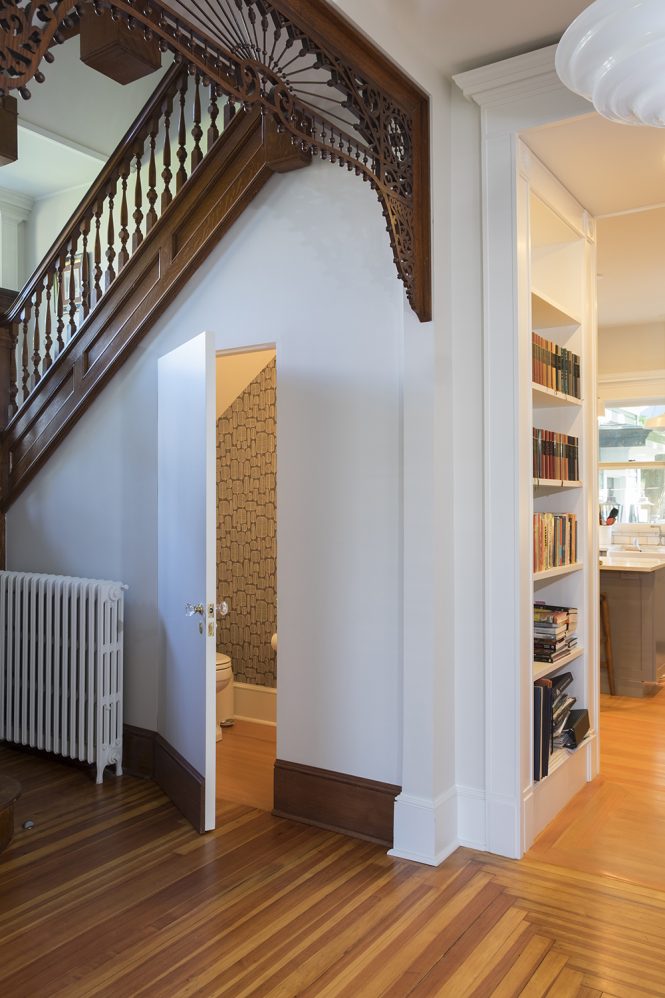 The mostly neutral interior invites bright bursts of colorful accents; the new first-floor bathroom is tucked beneath the staircase.

Upstairs, the challenge was to bring the bathroom facilities into the current century. “These days, even in older houses, people are used to having a master bathroom and a separate one for their kids,” Khanani says. “In the old days, everyone shared.” The original upstairs bathroom became part of the master suite, alongside a new walk-in closet. A shared closet between the girls’ bedrooms became the second bathroom.

The home’s exterior “needed a little bit of love,” Khanani says. “For a house its age, it has held up remarkably, but Maya and Guy were thinking they’re going to be in this house for a really long time. They wanted to make the investment to really bring it back to life.” The wood siding was thick with paint and rotting, so they recladed it with composite siding. “It has recycled material and concrete ash, so it’s almost indestructible and almost zero maintenance,” explains Khanani. “The paint finish is baked on in the factory. We picked a just slightly lighter color to give more light and changed up the trim to a cream color. We then chose a dark bronze color for the doors and windows—which harks back to the time it was built. I think it has a modern feel, but it’s still quite warm.”

The end result is what Khanani calls a “modern Victorian.” It’s a grand old house, but it’s filled “with very clean, modern furnishings and colors,” says Khanani. “Juxtaposed with really intricate and ornate elements from a Queen Anne or a Victorian, it’s very easy for the original details to stand out.” 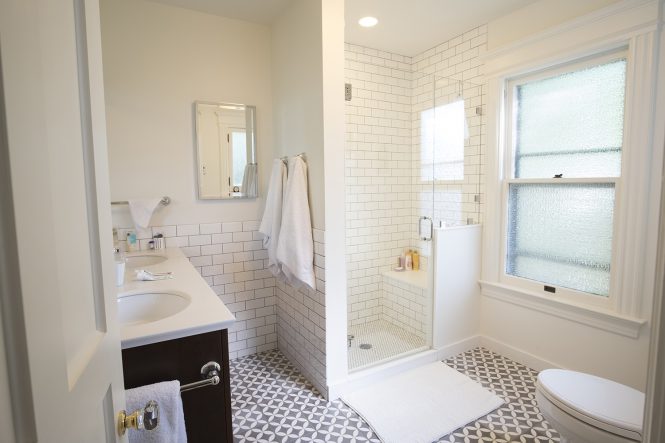 A closet between the girls’ bedrooms became their shared bathroom. 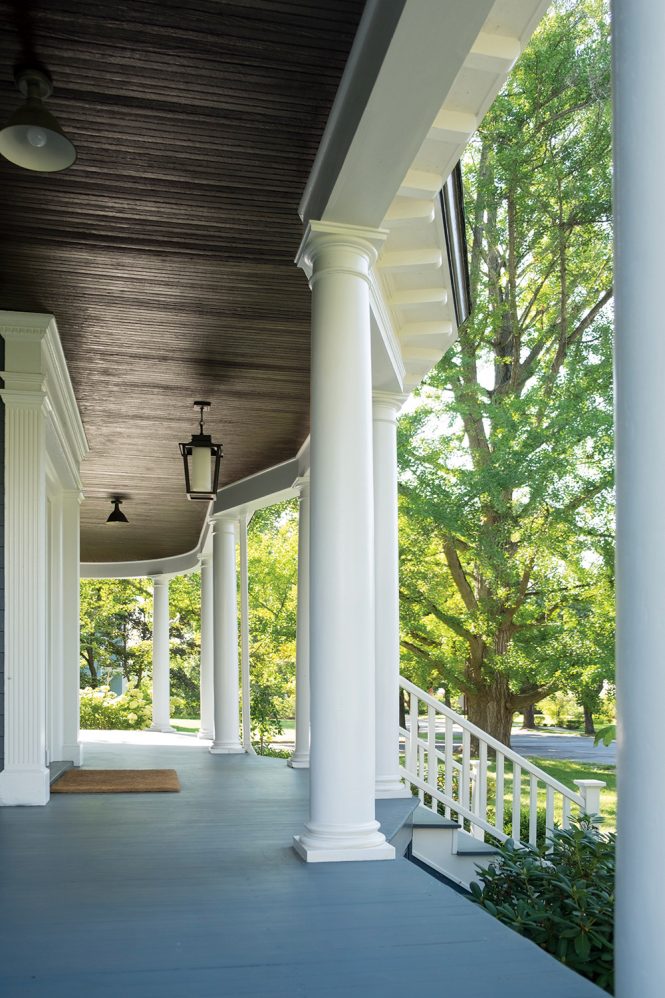 The Victorian porch is both generous and grand.