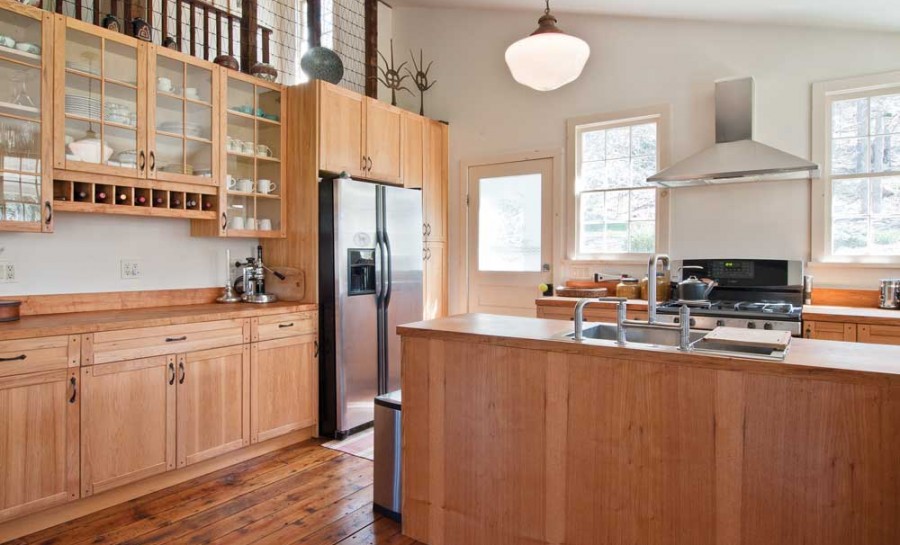 Eight years ago, Julia Ritchie, a consultant to nonprofit organizations who lives in Manhattan, was looking for a country house that would provide refuge from her busy schedule: a place to take her dogs and get outdoors on weekends. She also wanted to host family and friends for relaxing weekends in the Hudson Valley.

“I had been looking in Sullivan County, but most of the houses I saw were in really bad shape and overly priced for the market,” she says. 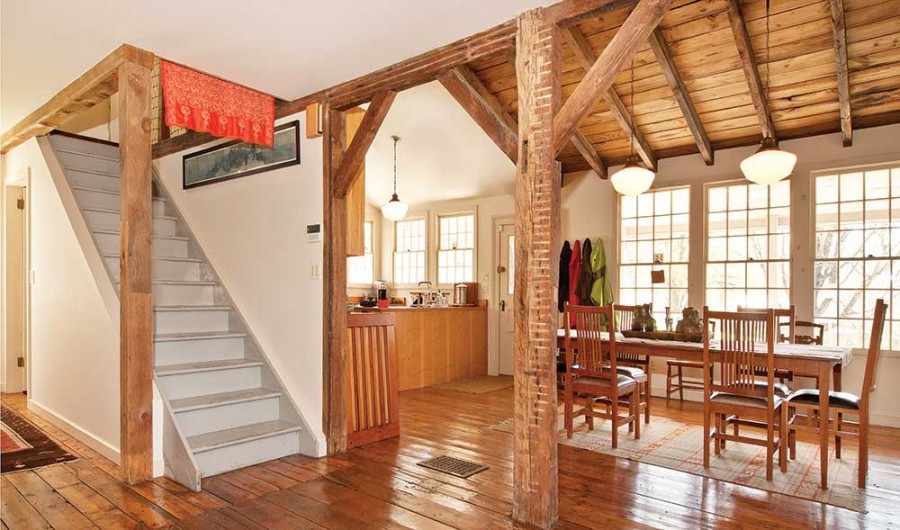 Ritchie broadened her search to include northern Columbia County, after a suggestion from her dog-walking neighbor in Riverside Park, who owns a farm in Ghent. She quickly spotted an 1832 Greek Revival farmhouse in Stockport, a river town of 2,800 about 60 miles south of Albany and 10 miles west of Ghent. The house was beautifully remodeled with authentic details, a distinctive layout, and unique charm.

What really sold her on the house, though, was the Kinderhook Creek that runs along the property. “I was told somewhat erroneously I could kayak down the Kinderhook right from the house to the Hudson River, and that was that,” says Ritchie, a California native with big blue eyes and a tousled mane of gray- blond hair. She had qualified for the 1980 Olympics in swimming, and thus the water was a draw, even if it didn’t lead to the big river.

Ritchie bought the house from graphic designer Jeff Adkisson, who is also a specialist in historic renovation; he now lives in a smaller house next door. Originally an Iowa farm kid, he studied architecture with students of Walter Gropius, founder of the German Modernist movement Bauhaus, and also reno- vated a home in Montauk purchased by singer-songwriter Rufus Wainwright. 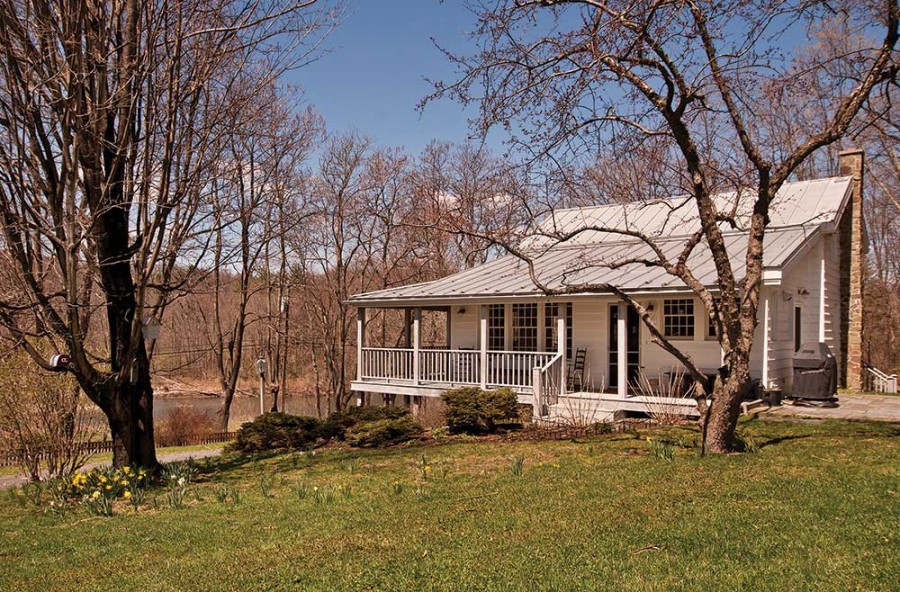 The house required extensive structural work when Adkisson bought it in 2003, so to keep costs down, he salvaged lighting fixtures and architectural ele- ments from a church he had attended as a child.

Selling the house to Ritchie was bittersweet. “I’d overspent my budget and underestimated the amount of work needed,” he said. But all was not lost: Having gleaned so much from the project, Adkisson hopes to transition from package design to doing this type of renovation full time. 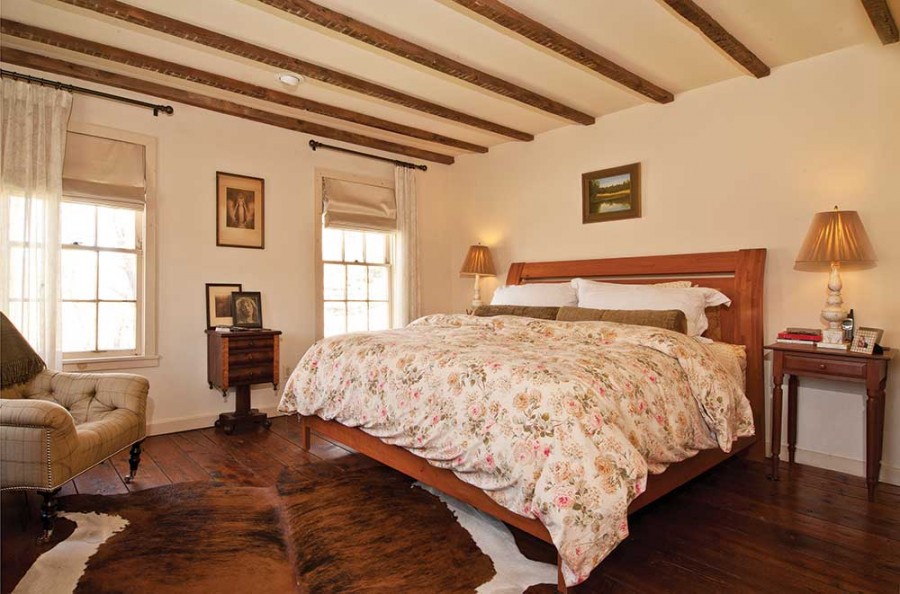 “Jeff has an incredible eye and talent for bringing an old home to life,” says Ritchie, but it was she who kept it breathing. The three-bedroom, two-bath house “was a great canvas to work with and practice my decorating skills.” She’s crafted a look that blends Shaker furnishings, early American antiques, contemporary furnishings, and local artwork. Her George Smith kilim couch is a centerpiece in her first-floor living room. Her decorating style builds on the architectural flourishes of Adkisson’s remodel; for example, antique wallpa- per left on a beam in her study harmonizes closely with Kinderhook-based Michael Devine’s hand-printed fabrics on the upholstery.

Her favorite part of the three-story, 2,500-square-foot house, which has a wrap-around porch, is the office and seating area off the guest bedroom, which Adkisson made by opening the attic into a loft. Inexpensive horse fencing secures the ledge overlooking the dining room and kitchen.

Adkisson and Ritchie continue to nurture each other’s interests. After meeting at the closing, they became good friends. Last year, they built a huge organic vegetable garden by the water with timbers from their joint property. They also keep bees together. Even if the house didn’t provide the connection to water she might have wanted, Ritchie solved the problem. She put in a lap pool. 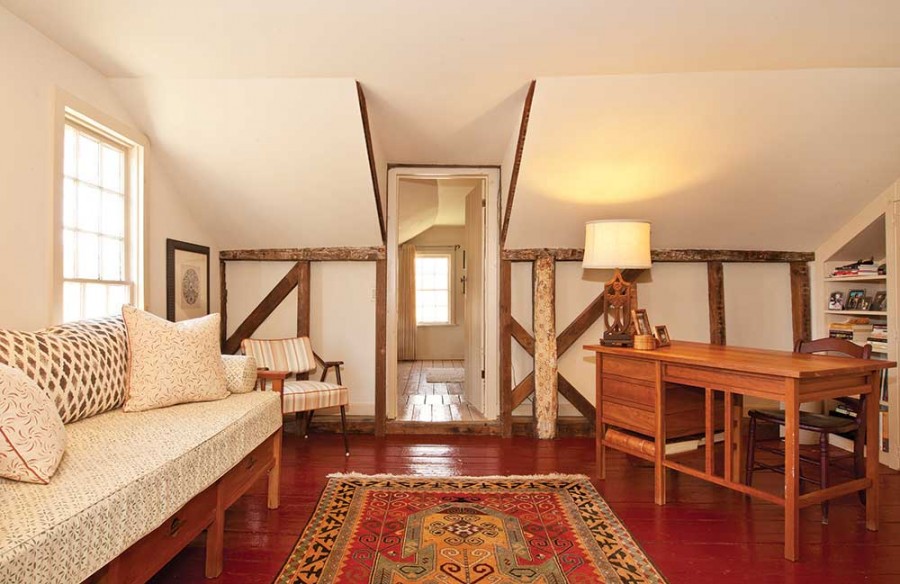