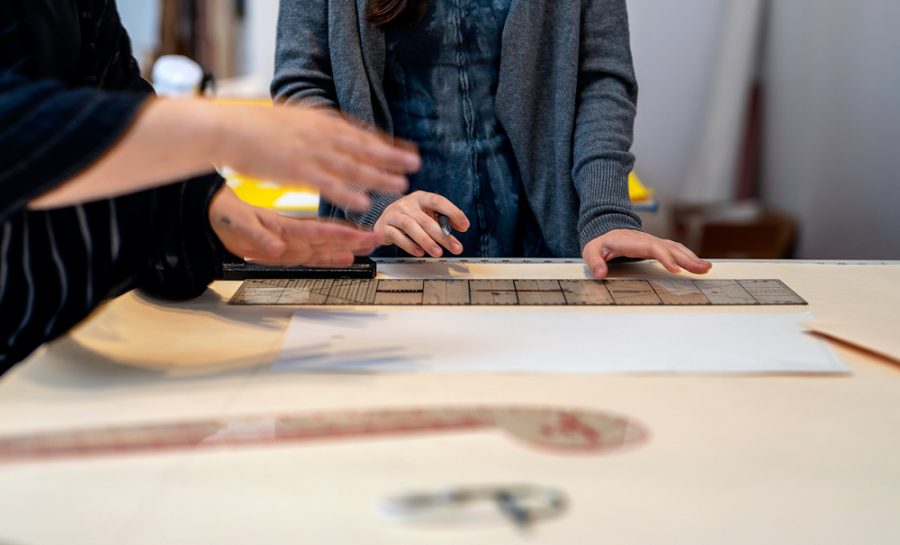 After less than a year in operation, Catskill-based Made X Hudson is already proving both the demand for, and the viability of, a centralized manufacturing facility for the Hudson Valley’s small-scale textile producers.

A lot happened in the freshman year of the pandemic. Businesses closed and opened. People mass-migrated to the Hudson Valley from the city. We learned how to unmute ourselves on Zoom. And a group of people got together to address the growing demand for local production. 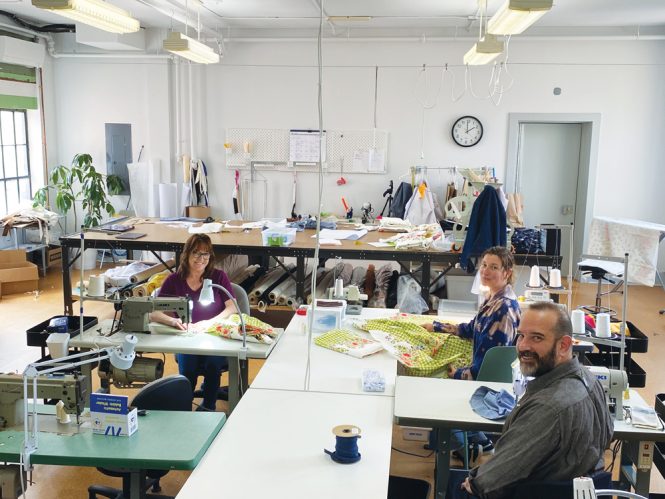 In July 2020, Hudson Community Incubator founder Eric DeFeo started hosting a series of twice-monthly calls with local creatives and entrepreneurs to explore the growing need for manufacturing capacity to support the region’s burgeoning maker class. “In the Hudson Valley, there are predominantly design and food small businesses—those are the easiest to get up and running,” DeFeo says. “We eliminated food pretty early on because of the complexity of getting a commercial kitchen space and the licensing around it for something that would only serve a few companies. Whereas the garment businesses…” Well, in the artisan garment and soft goods industry there was room to expand in spades, helping even the smallest of maker operations.

It was through these calls that DeFeo eventually met Sirpa Cowell, who would go on to collaborate with him on Made X Hudson as a board member and head of design, development, and production. Cowell, who brings over 25 years of experience in international design, product development, and manufacturing, was a perfect partner for this project. After all, she had already tried her hand at a similar vision. Teaming up with Tsia Carson, in 2017 Cowell opened Factory & Main, a sustainable, slow-fashion co-op in Catskill with both retail and production space, including a sampling room, cutting space, and photo studio. 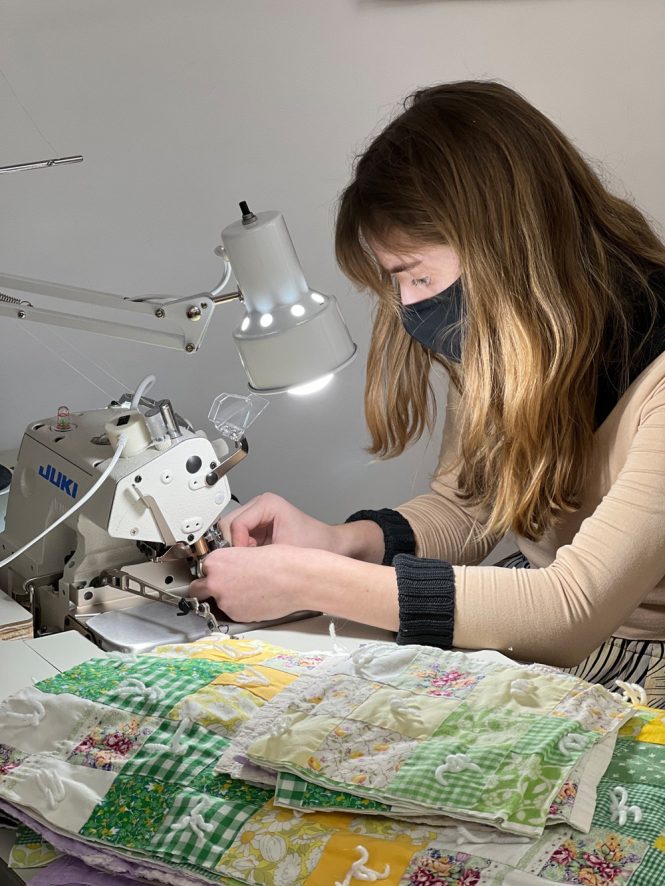 Stitcher Rachel Marino will be studying at the Fashion Institute of Technology in Manhattan this fall.

Factory & Main was a pandemic casualty, but even after letting go of the space, Cowell held onto the dream of a vibrant center of sewers revitalizing Main Street businesses and empowering makers. “I have a big dream that we could one day have a big hub with cut-and-sew, digital printing, pattern making, and a studio where we can photograph items so clients can just put them directly on their e-commerce platforms,” she says of Made X Hudson’s future. “If we could do all that and offer it to smaller clients—that is my dream.” Here, DeFeo jumps in to add, “That is our collective dream. We want to make this an innovation hub for the region. There are not that many facilities like that in the region or in the country.”

Through Factory & Main, Cowell had met many of the region’s makers and was aware of the need for small manufacturing. “There is garment manufacturing in the city, but there are higher minimums,” she says. So they tailored Made X Hudson’s offerings to suit. “We try to be friendly to small designer labels, so that we can help them offer something other than fast fashion,” she says. And when she says small, she means it. Made X Hudson’s production minimum is 24 pieces of a single style—a sample quantity accessible to even the most micro of makers.

By removing the barriers to entry—namely production minimums and accompanying costs—Made X Hudson hopes to fill the market with ethically made soft goods and clothing from independent designers and brands, providing a bevy of local alternatives to mass-produced garments. Per their mission statement, Made X Hudson is dedicated to developing “local, small-batch, high-quality manufacturing prioritizing ethical labor practices and the creative design and production talent of the Hudson Valley.” But with values like that, it didn’t take long for word to get out. “It’s locally focused, but we work with small brands all over the country,” Cowell says. “We just got an order today from Nashville. We’ve worked with companies in Texas, California.”

Made X Hudson got its start in an old firehouse in Leeds—a friend’s unused gallery space. But as the orders came in and the waiting list grew, the team knew they needed to find a bigger space. “It was not properly insulated. Winter was coming and we were getting busy,” Cowell says. They found what they were looking for in a second-floor space on Main Street in Catskill—a big, open space with lots of windows and room to spread out. 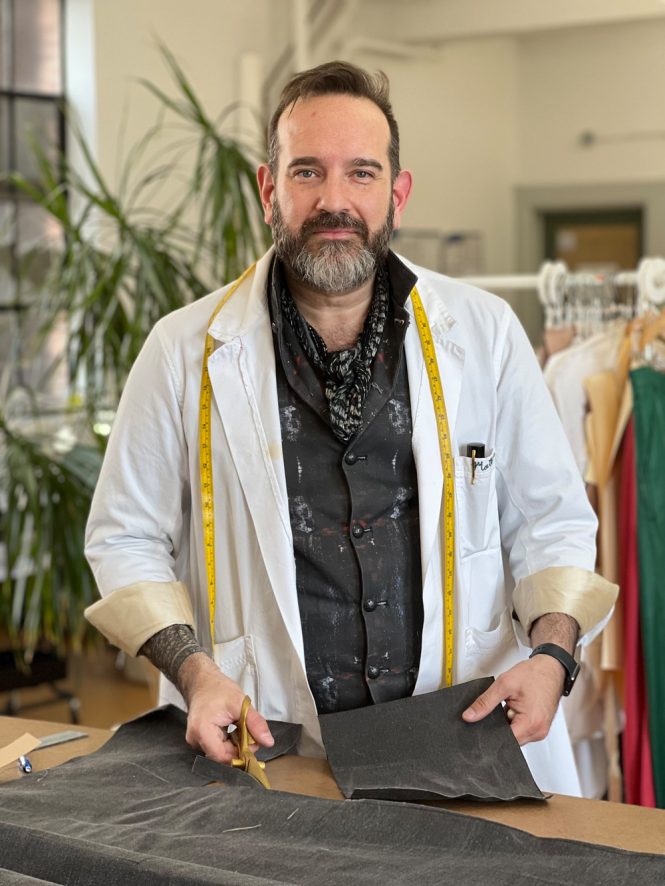 In its first year, Made X Hudson has collaborated with over two dozen brands, hired six people, and overseen interns from two regional colleges, including supervising Marist’s fashion program seniors for their capstone projects. Some local makers they’ve worked with include Marvin Ruby, Quittner Antiques Hanoux, Katrin Reifeiss, and Katrina Rodabaugh. “Having really experienced staff up here is still really hard,” Cowell says. “We’re willing to train—it’s more about being comfortable sitting in front of the industrial sewing machine. The rest can be learned.” Speaking of learning, future plans for Made X include holding sewing classes and other events that are open to the public.

“We’ve basically been in pilot mode,” says DeFeo of the self-funded undertaking. “Now that we’ve worked with at least 25 brands, we feel we’ve validated the concept and demand and we’re looking to grow and scale.” This year Made X Hudson will be looking to fundraise, all the while playing the delicate balancing act between workload and employee count. “We’ve had to believe in ourselves to invest in certain machines,” DeFeo says. “But so far, we can comfortably say it’s been paying off. We’ll be looking for more support to grow and make this a bigger hub for the area.”