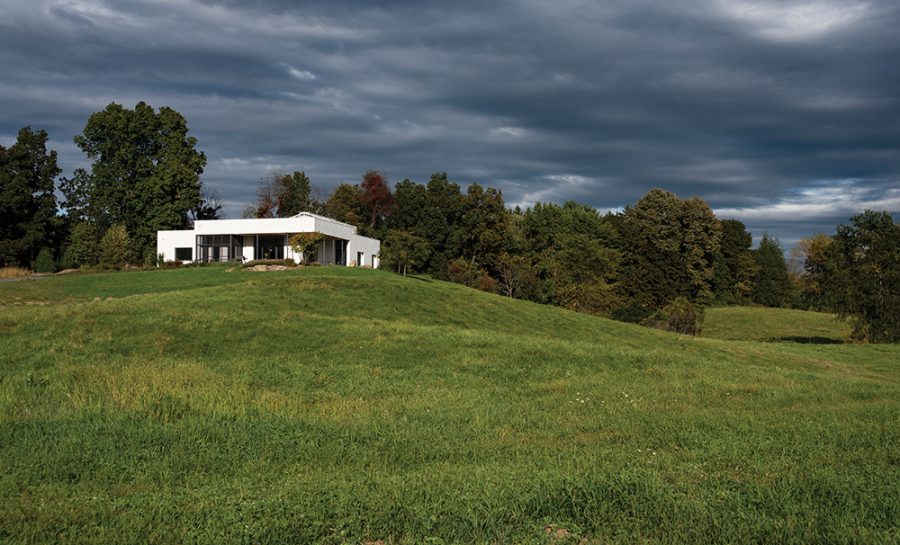 Martin Schweizer had been a Park Slope homeowner and an interior designer for over 35 years when he realized that in order to complete his dream project—designing a “forever home” of his own—he would have to get out of the city. But that was okay with him, because he also knew it was time to change his life. So in 2013, he and his dance-director wife bought 11 acres spread out across a hill just east of Red Hook.

“This was a dream come true for me,” says Schweizer, who still works as an interior designer and drew up the designs, which Germantown-based Peter Sweeny Architects made a reality. Schweizer knew what he wanted: a contemporary country house with great views and a low carbon footprint. But his greatest hope was that the new house would not only give him and his wife a life that was better than the one they’d known in Brooklyn, but also allow them to grow old there. “We didn’t expect a better life or a worse life,” Schweizer says. “A different life, with new challenges.”

Originally from Switzerland, Schweizer wanted to be near mountains, so the couple chose a property offering views of the Catskills, across the Hudson River, which makes for stunning sunsets and the chance to watch storms move down the peaks. But it’s the immediate views that Schweizer finds himself most enjoying, like the meadow rolling down around the house. The hill isn’t especially high, but it’s tall enough, notes Schweizer, so that from the top of it, turkey vultures and hawks routinely zip by at eye level, as the fog pools below. During late afternoon, the waning sunlight coaxes a warm glow from the house’s solid white exteriors; seen from the long, winding, private road, the house shines like a beacon in the darkening sky.

It’s these aspects of his new life that Schweizer wants to celebrate, which is why the 900-square-foot, 12-foot-high open space incorporating kitchen, living, and dining areas is dominated by floor-to-ceiling windows facing south and west, showcasing the sunlight and the seasons. (Just outside the windows, on a small stone patio, is a pair of Adirondack chairs overlooking a rock garden made of excavated stones, that afford even better views.) The space itself, which dominates the three-bedroom, 3.5-bathroom, 3,200-square-foot interior, encapsulates Schweizer’s expansive vision.

The views indoors are equally generous. Each section of the great room provides an unobstructed view of anyone else in the space. “This is a communal place, and when you are in the room, you can observe and contact everyone in the room,” Schweizer says.

The kitchen side consists of an island of warm French walnut, contrasting with the white cabinets and appliances and the pale marble backsplash. The dining table—which was built from a French walnut tree trunk that Schweizer bought in Pennsylvania—was designed to be unobtrusive yet harmonize with previously built pieces, such as a long wooden console covered in quarter-sliced anigre wood veneer. The console, table, and kitchen island were designed by Schweizer and fabricated by SFA Interiors in Brooklyn. Schweizer also had a hand in the steel lighting fixture hanging low over the dining room table—he designed the light’s wishbone-shaped ceiling suspension bracket, and Hammerton Inc., an artisan lighting fixture manufacturing company in Salt Lake City, fabricated both the fixture and the bracket.

Schweizer’s subtle design allows the couple’s two favorite furnishings—the only ones that he didn’t design himself—to command the great room’s attention. In the living area hangs a large, lush Neo-Expressionist painting by Garance Werthmüller, which the artist painted after visiting the house under construction; standing nearby is an enormous 400-year-old Baroque cabinet, in Schweizer’s family for generations, which is the only ornate piece in the house. “My parents’ house in Switzerland had rather low ceilings and it felt compressed in there,” he says.  “Now it feels like it’s starting to live again.”

Often, designers who get to be their own clients tend to show off. But Schweizer opted for a clean, minimalist style, so instead of calling attention to itself, the house yields to the people in it. “Everything is flush, there are no mouldings; everything is as quiet as possible,” he says. The result is soothing, even in the bathrooms, which feature the same pale gray porcelain tiles that make up most of the flooring throughout the house. With their plumbing hidden and their showers and shelving recessed, the bathrooms’ airy feeling echoes that of the great room.

The house’s openness is practical as well as aesthetic, in that the structure is compliant with the Americans with Disabilities Act, and wheelchair accessible. There is only one floor, and there are wide doorways and no thresholds between spaces. This will allow the couple to age in place, no matter what challenges the years ahead bring. “This is part of how we should build today,” Schweizer says. “The criteria I set for our house, they’re generally valid, and should be a standard requirement. The corridors are wider and less claustrophobic, and the doors are easier to use.”

The house’s only stairs lead to the roof, where two features keep the house’s carbon footprint low. First, below the parapets are 54 solar panels, hidden from view, which provide over 90 percent of the house’s electricity. What can be seen is the house’s rooftop greenhouse, where Schweizer is starting plants for next summer’s organic vegetable garden. It’s another new but enjoyable challenge. “I’m having to find out all this stuff by myself, and it’s a slow learning curve,” he says. “But that’s a part of trying to grow organic vegetables—it’s a lot of effort.”

Although Schweizer is installing heating mats to help the plants germinate, he doesn’t want to heat the greenhouse itself, fearing wasted energy. However, the greenhouse gets ample light, and Schweizer is discovering which hardy greens and vegetables can thrive in the space.

The couple’s efforts to get back to the land aren’t confined to the greenhouse or even the small garden outside the front door. Many of the properties’ acres are dense with trees—and poison ivy. In order to eradicate the poison ivy, the couple is considering buying or renting a herd of goats, and weighing the comparative costs. If they do become goat herders, says Schweizer, then they’ll need to build a barn, which will mean another design project. He’s looking forward to that. “These are the things that come up, and [that] I could not foresee, being an urban citizen for 35 years,” he says with a laugh. “But those are the challenges I hoped for, and I got them. Which is fun, I enjoy that.”