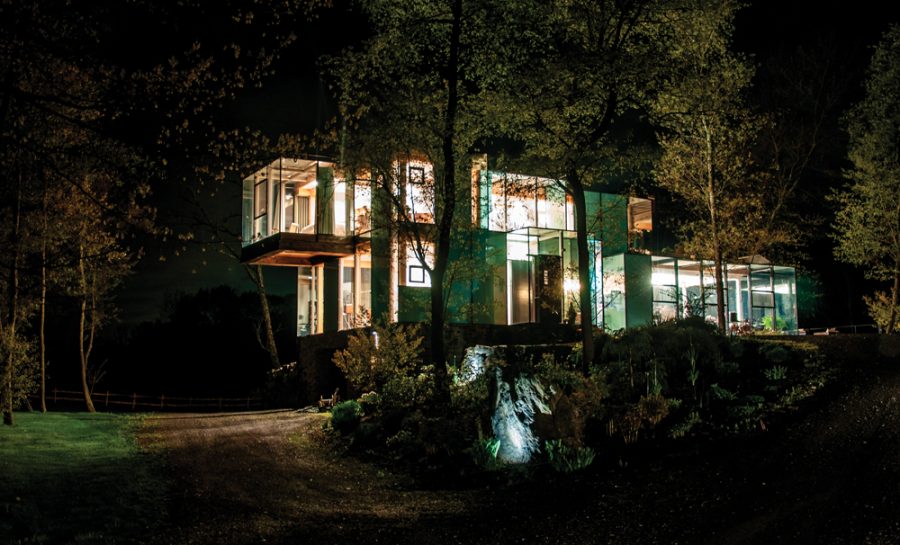 If you ever wanted to film a movie scene where the camera glides over farmland hills, across a tree-lined field, and inside a spacious house all in one shot, you could do that with architectural engineer Franz Safford’s transparent VS1 Glass house.

Safford’s “glass journey,” as he calls it, began during his childhood in Vienna, Austria, and later the Hudson Valley, where he emigrated with his family at age nine. Like millions of children around the world, young Safford loved Lego. But his Lego constructions were more than play—they sparked an interest in architecture that shaped his life. “I realized that with a fixed number of pieces, I could create different versions of a design,” he says. 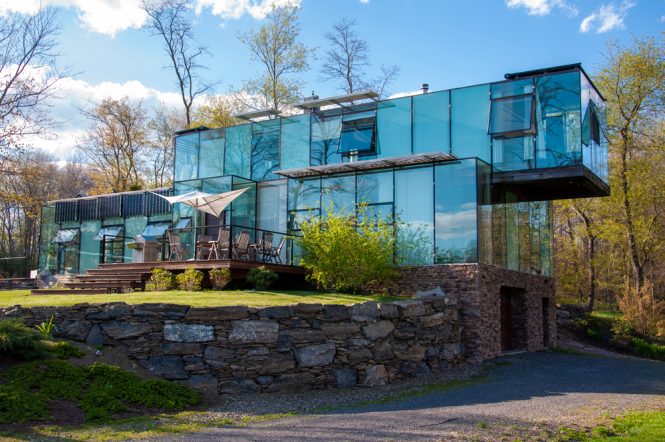 The backyard includes a cabana and pool on the left, a generous deck off the dining and living areas, and a lower-level garage and entryway on the right.

Decades later, Safford’s childhood pastime inspired the concept of a simple “kit of parts,” which became the basis of the design he uses to build innovative structures around the world. After graduating from the University of Colorado at Boulder, he became a project manager in New York City, gaining experience using aluminum, steel, and glass attached to steel as structural components. Projects whose construction he managed, like the Time Warner Center and Times Square’s TKTS booth, further propelled him toward using glass as a primary structural component.

In 2004, Safford merged his passion for Lego and his respect for glass to invent the VS1 Glass system, his patented method for constructing structures almost entirely with glass. He founded the architectural services company Innovation Glass in New York City in 2006, with the Philip Johnson Glass House, built in Connecticut in 1949, and the glass pyramid-shaped Louvre Museum, designed by Chinese-American architect I.M. Pei and completed in 1989, as his inspirations.

Like Lego, the VS1 concept is elegantly simple. It uses a blade-shaped mullion and cast aluminum fittings to support insulating or monolithic glass panes, along with structured silicone between the panes to keep them rigid. “Most designers don’t use glass for all it can do. I use it as a structural entity, which is unique in the architectural world,” Safford says.

Since founding his company, now based in Tivoli, Safford has utilized the VS1 design in dozens of buildings, including the McDonald’s flagship in Chicago, the United Airlines terminal at Los Angeles International Airport, the Central Bank of Ireland in Dublin, and the Statue of Liberty Museum in New York City.

But while building glass structures around the world, Safford pined for a home that would bring him closer to nature and allow him greater separation from his work life in New York City. After his wife passed away, he moved his family from suburban New Jersey to Red Hook, NY and rented a farmhouse. In 2013, after buying a 2.5-acre plot near Tivoli, to which he later added an adjacent 3.5-acre plot, he began designing a house with a separate studio wing, “using everything I had available to me at the time, to express all that a glass house can do.”

It took Safford and contractor Paul Cassito two years to complete construction of the VS1 Glass house, a 4,200-square-foot building made completely of glass that serves as Safford’s home and the headquarters for Innovation Glass. The two-story, three-bedroom, 2.5-bathroom house includes a cantilevered master bedroom, separate office and studio, finished rumpus room basement, two decks, and rooftop patio; outside, looking out over grassy rolling hills, are a custom pool, hot tub, pool house, and sumptuous landscaping by Amelia LeGare of Avant Gardens. 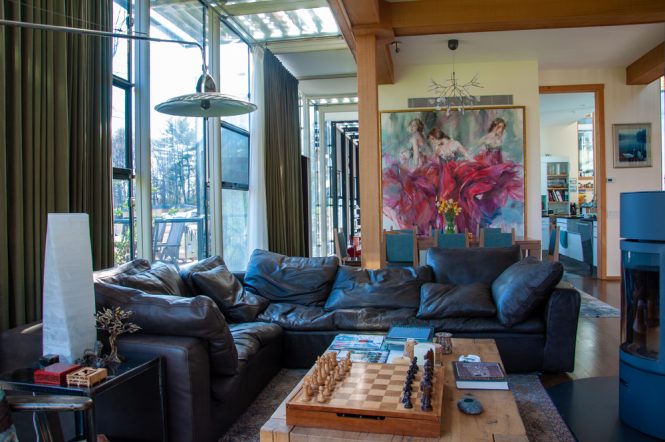 The dining table and living area are overlooked by a dramatic painting of dancers by the Russian artist Anna Razumovskaya.

Using the traditional Hudson Valley farmhouse as inspiration, Safford designed the house with 12-foot glass panes on the first floor and 10-foot glass panes upstairs. The vertical glass panels consist of two pieces of insulating glass units (IGUs) comprised of two 3/8-inch-thick tempered glass panes, like those used in car windshields, with a 1/2-inch spacer in between; the roof’s horizontal pane is comprised of two specially insulated pieces of 3/16-inch laminated safety glass, like that used in shower doors. The entire outside skin of the VS1 house is only 1.25-inch-thick glass. All the glass—5,900 square feet in total—was produced by Pilkington Glass.

Structured silicone seals the glass panes, not only creating weather integrity (keeping water out), but also providing two important structural aspects. First, the house has extremely rigid walls. “During a storm, a regular house will creak with the wind, but here, it feels like you’re inside a rock,” says Safford. In fact, he recalls, once during a violent storm, a tree fell onto the studio and snapped in half, but the house suffered no damage. “It’s exhilarating to be encased in glass when there is a rainstorm,” he adds. “In deluge moments, one literally imagines what it must be like to look through a waterfall,” especially in the cantilevered master bedroom. Snowstorms, he says, are like being inside a snow globe.

The structured silicone seal also allows for stability in the all-glass corners, a rarity in architecture (New York City’s iconic Fifth Avenue Apple cube is an example). “Normal houses include metal tubes to create the corners,” Safford says, “but here all the metal has been removed in lieu of using glass as the structural element.” 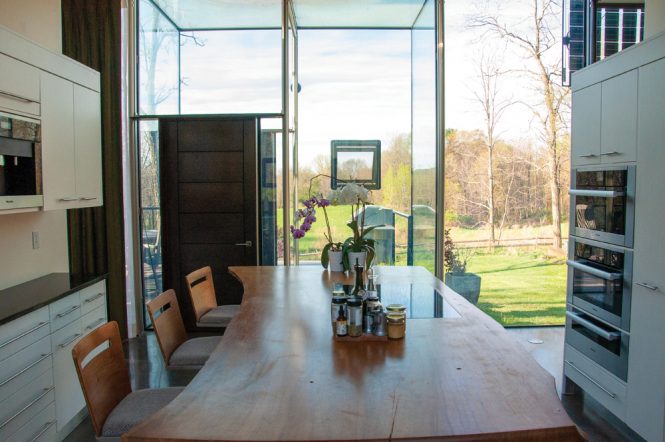 The kitchen island, with its natural Mahogany top, was designed by Terry Nelson Woodworking.

Minimizing metal in the construction and maximizing the sight lines were two of Safford’s goals when approaching the house’s design. Framed with a steel structure with wooden cladding on interior walls, the house includes several insulated solid walls—but the ratio of glass vs solid walls is 85 percent to 15 percent.

Safford’s other priorities included maximizing energy efficiency and minimizing maintenance. The house’s primary source of heat is the passive energy of the sun coupled with radiant heat in all floors, while solar panels generate 20 percent of its electrical needs. (Safford’s goal is to reach 100-percent off-grid capability.) “In the winter, on a sunny day, the windows can be open, the heat off, and the house is warm,” he says.

A rooftop weather station connects to the Savant smart home app, accessed via an iPad embedded in the kitchen wall. Savant controls the studio’s mechanical shades and the house’s window coverings, all deployed from the ceiling, and regulates the heating and cooling system (along with lighting and security) in the house’s 12 zones by responding to the weather station’s cues with automatic adjustments. The program can also be controlled remotely if Safford leaves the house and forgets to turn the lights off, or wants to turn lights on at night to make the house appear occupied. He likens the house’s self-regulating aspect to the body’s response to vigorous exercise: “You don’t have to tell your body to sweat; your body does it automatically.”

Because the house has no gutters—rain rolls off the glass roof—and the draining system is buried in the gravel and stone perimeter along its base, the only required maintenance is cleaning the glass, which is done twice a year. 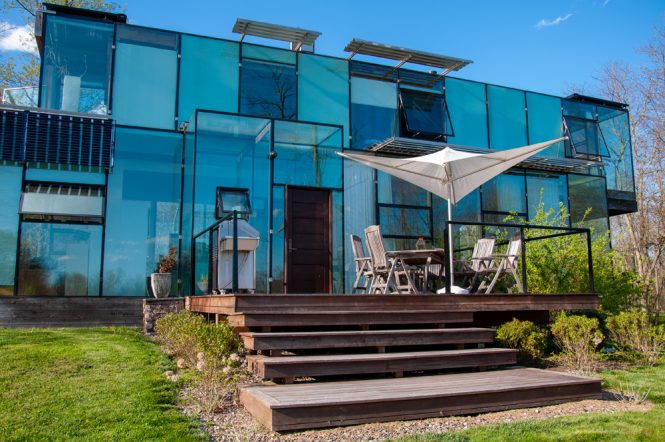 The house is so energy efficient that its windows can be opened on a cold day and the interior will still keep warm.

Safford’s holistic approach is also evident in the house’s decor, which complements the magnificent views. On the first floor, adjacent to the studio wing, the kitchen features a honey-colored Mahogany island top, designed by Terry Nelson Woodworking, and sleek white Miele appliances. A colorful painting by Russian artist Anna Razumovskaya overlooks the dining space and adjoining living area, whose furnishings—including a black leather sectional and Tadao Ando Dream Chair—face a 40,000-BTU Stûv fireplace. Other features include wood cladding and reclaimed barn wood fascia from Carlos Padilla, a stained maple floor, and stained-glass windows by Peter Nein in the powder room.

Upstairs, along the hallway between Safford’s sons’ bedrooms and the master bedroom, is a black-and-white mural by Rowan Willigan. The bedrooms and living and dining areas are lined with sheer white privacy drapes to allow light in, and opaque green cotton-wool drapes to block light and heat. But natural light shines in the studio all day long, and Safford’s employees say it improves their mood and productivity, especially during the winter, when the days are short.

“Everything was thought of; all questions were asked—not only what a house could be, but, for example, what a door could be,” says Safford. He is using VS1 as a model for future clients and has already begun construction on a second VS1 house in the region. 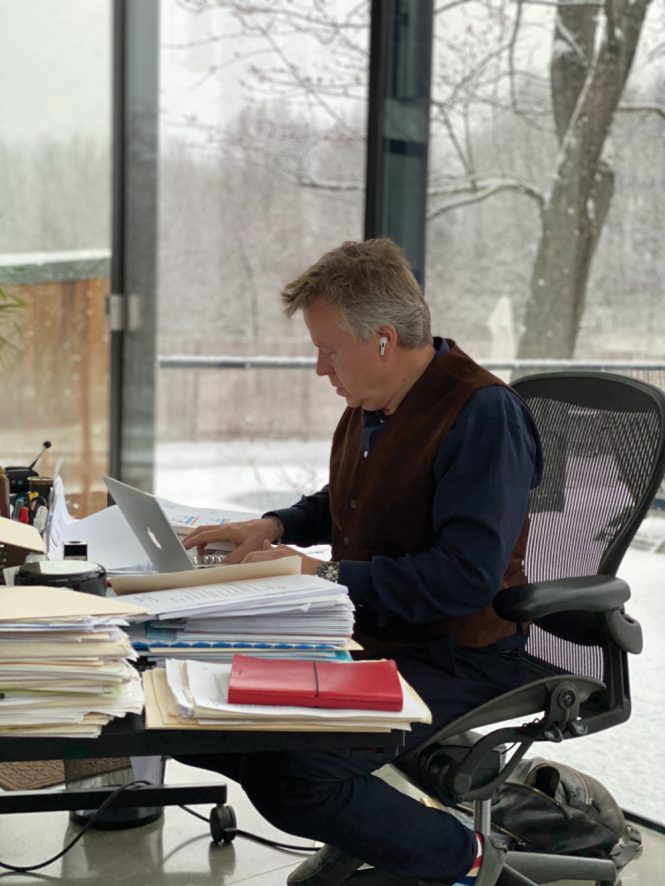 Franz Safford at work in his studio/office last winter.

Like a Lego set, future VS1 houses will be adjustable, allowing clients to alter the design without increasing the price or to upgrade features later on. The smallest model is an 875-square-foot, single-story, one-bedroom house that is “cheaper than a regular house built from scratch,” says Safford. “You’re able to reconfigure the shape of the house and make it your own without affecting the cost. This is one of the coolest aspects of this new kind of modular house. We actually encourage modification.”

As an added bonus, the materials Safford uses are extremely hygienic. “Glass and polished concrete are very easy to clean,” he says. But the VS1 house’s main driver is its eco-friendliness. While glass is energy-intensive to create, once it’s made, not only is it energy efficient, allowing homeowners to save on energy costs, but it’s also long-lasting: rust- and weather-resistant, strong and durable, and chip-proof. Safford still studies glass—currently, he is learning how to use long panels of up to 65 feet, a recent trend in architecture. “It’s a fascinating material—not a pure solid, but made of liquid,” Safford says. “When you’re working with glass, you’re always a student.”