Since the beginning of the pandemic, Douglas Larson, the founder and principal architect of Larson Architecture Works, had been working at a tiny table in the Pine Plains home that he and his wife had renovated over 15 years ago and enjoyed as a peaceful respite from New York City. With new projects in the Hudson Valley, their house had become an increasingly important, if cramped, outpost for the firm.

With barely room to work, let alone store his library of books on regional architecture or the rolls upon rolls of drawings for in-progress projects, Larson knew it was time to set down roots and establish a brand-new home office away from home.

In the summer of 2021, Larson and his wife were on their way out of town when they discovered that two aging houses smack-dab in the center of the Dutchess County hamlet of Ancramdale were for sale. The timing could not have been more perfect. “The buildings are at a great crossroads,” says Larson. “It’s a high-visibility spot, and there are already a lot of creative people living and working in the area.”

Larson’s involvement with the local community also made the move into the hamlet a natural choice. Since 2018, he has been overseeing the design and restoration of the Stissing Center, a circa-1915 building formerly known as Pine Plains Memorial Hall, pro bono, and now serves on the organization’s board. “There is so much underutilized infrastructure in the Hudson Valley,” he says. “I’m so glad I can be a resource to institutions and people who need help with their structures or facilities.”

In nearby Ancramdale, Larson saw potential in the house at 2 County Road 8, which he recognized as being in the Greek Revival style dating to around 1830. Larson noted that it had later been modified with Italianate details along the roof—a style known as “Hudson Valley Bracketed” that was popularized by architect Andrew Jackson Downing.

As the architect soon realized, plenty of the home’s other original details were just waiting to be discovered. The asbestos siding gave way to sturdy wooden clapboard, which has been painted dark gray. Underneath the synthetic flooring inside, the original wide-plank flooring is now painted a crisp white that accentuates the natural light that the corner parcel receives. 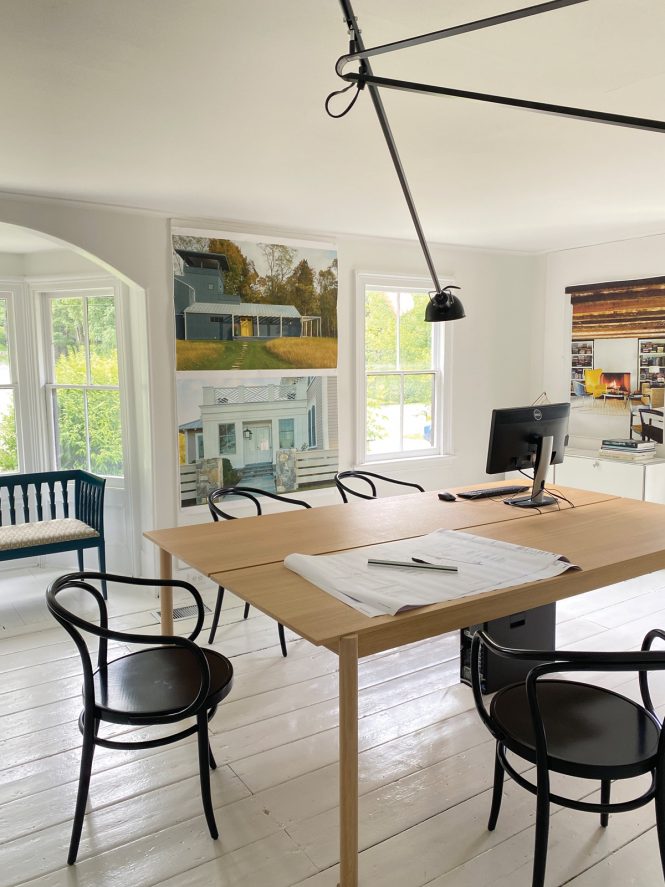 A large table has been added in the former living room, where Larson and visiting members of his firm can work, and bedrooms on the second floor of the house are now used for overnight stays. The house next door, which the couple also purchased, remains in use as a long-term rental. “There’s a shortage of local affordable housing, so we’re committed to keeping that space available,” he says.

Though Larson’s New York City office has since reopened, the Ancramdale office now offers him a place to meet clients, a way to work more easily with his team, and acts in service of one of the architect’s greater goals. “It’s important to restore and reactivate the streetscapes in our hamlets,” he says. “I am so glad to be a part of that here. The hamlets are so much of the character of the area. If these buildings are neglected, they will eventually be torn down, and when that happens, history goes with it.”