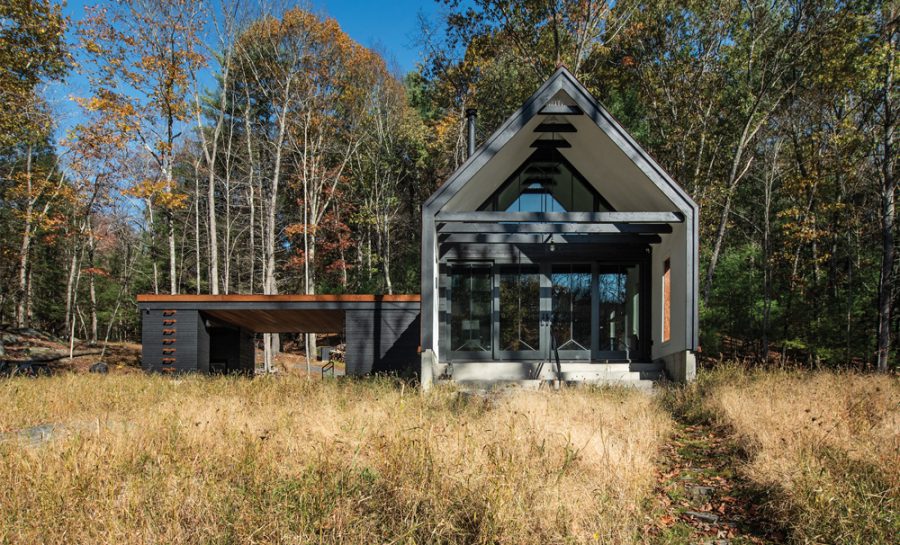 Three years ago, when architect Kyle Page found his version of heaven—19 acres of pond, woods, and federally protected wetlands in Sullivan County—the property was so wild it didn’t even have an address. The Brooklyn-based architect, whose firm Sundial Studios specializes in residential work and historical preservation, had been searching for a weekend property to share with his wife, landscape architect Hardy Stecker, and their two sons, ages three and five. He had already gut-renovated his family’s skinny, 12-foot-10-inch-wide, 1880 brownstone in Brooklyn’s Clinton Hill neighborhood, converting it from a one-family to a two-family house with crisp modern detailing, but preserving its mahogany stair railing. But that wasn’t enough.

“We love living in the city,” says Page, “but one of the best parts of living in the city is getting out of the city.” He wanted his family to experience nature, and he missed designing houses for a wild landscape, which he had previously done in Denver and Telluride, Colorado. “My favorite way of being an architect is designing and responding to a beautiful site,” he says.

So Page browsed online for land. “My focus was on finding some uniqueness, whether it was a view, a creek, or even a stand of trees,” he says. “The more I got involved, the more I wanted to build something new,” he says.

Then he found the pond and wetlands outside Phillipsport. “There was no address, but I was able to preview the road online and then drop a pin in it,” Page says. He drove up the next weekend and immediately saw the site’s potential. Surrounded on three sides by thickly wooded hills, the property is entered via a stagecoach road from the early 1800s. Once an apple orchard and cattle paddock, the land is laced with a stone ledge and crowded with 100-year-old ash and maple trees, all centered around a one-acre pond that empties into protected wetlands. “I just fell in love with it,” he says. 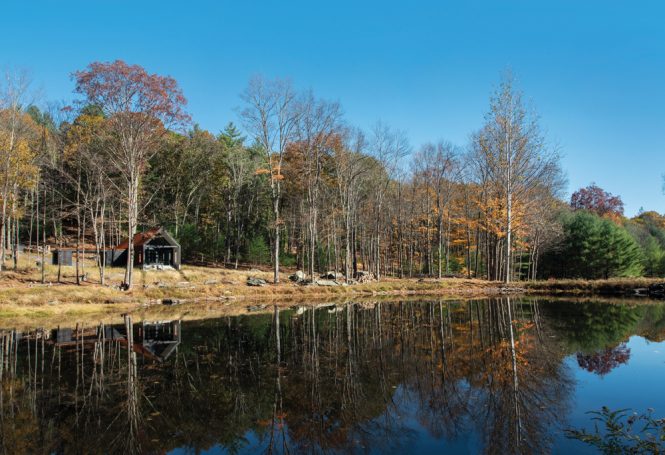 Architect Kyle Page designed his family’s weekend home to be as close to the pond as possible: 75 feet from the edge.

The Setting’s the Thing

A year later, Page began construction on the 1,640-square-foot Modernist cabin he calls his  second home. “My main design goal was to create a beautiful piece of architecture that was subordinate to the setting,” he says. “I wanted to create something that belonged here, that was in concert with and in constant dialogue with the surroundings.” He began by hiring a surveyor to map every tree with a diameter greater than eight inches, along with the north- and west-traversing ledge. “I wanted to be able to work with the site as much as possible and understand the existing conditions,” he says. 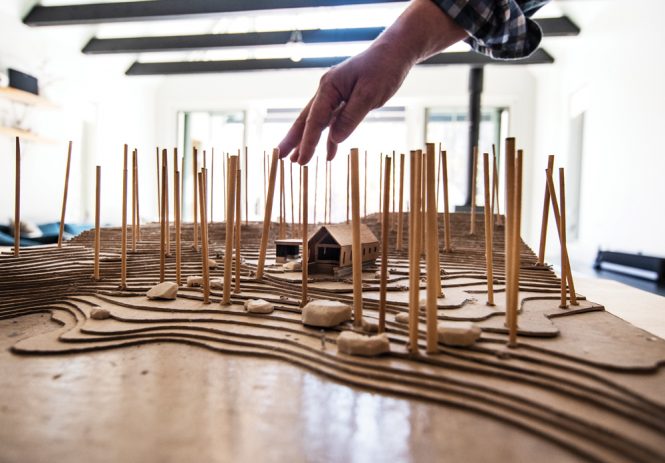 To design and situate the house, Page built a scale model of the pond, wetlands, trees, and stones from a surveyor’s notes; today, that model is kept on his desk in his home office, which is housed in a loft overlooking the kitchen.

From the surveyor’s notes, Page built a scale model of the trees, stones, pond, and wetlands. “We were able to slip the house in just perfectly,” he says. “We’re at a 75-foot setback from the water and our septic tank is set back 100 feet from the federal wetlands. It was a tricky needle to thread, but it came out beautifully.”

With the design, Page wanted “to get down to the essence of form, and the purest response to the surrounding landscape,” so he situated the house’s rectangular concrete base two feet above the ground, facing south, adding concrete steps that tumble from the porch toward the pond. The ridge beam is aligned with true north, and a 12-foot-by-12-foot pitched roof tops the rectangular structure. A passive solar design allows the shadow of the ridge beam to function as a sundial. “At noon, I love to watch the shadow of the handrail go to a straight line,” he says. 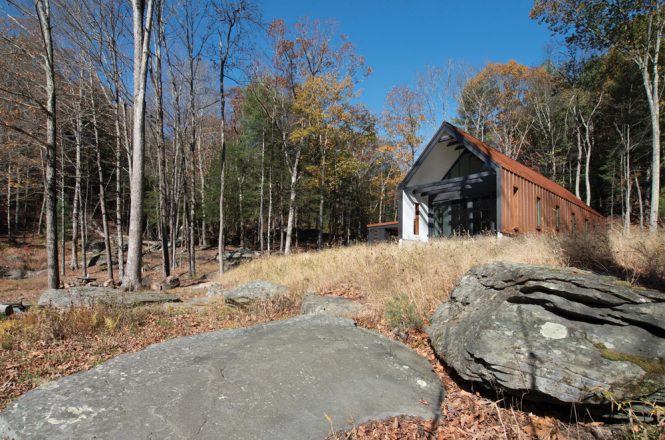 Page chose exterior materials that weather, allowing the house to meld with the landscape. To minimize maintenance, the house is clad in untreated CorTen steel. Blackened cedar wood forms its framing and covers the exterior northern wall, contrasting with the steel, which has rusted reddish brown.

Stecker seeded an adjacent field left bare by the construction with native grasses and wildflowers. The few stones moved in the construction were reintegrated into the landscape, and only a few ailing trees were chopped down. Page keeps a path mown from the house around the pond’s perimeter, but the rest of the landscape is wild. “My kids go nuts here for the wildlife,” he says. “They pick up millipedes and newts. We also have deer and turkey and there’s small mouth bass and bluegill in the pond. There’s a blue heron that comes to fish. On sunny days, turtles line up on a log along the edge of the water.”

Page left the blackened cedar framing exposed throughout the interior and incorporated walls of blackened cedar in the mudroom, which is entered from a carport and leads to the great room. Exposed beams run through the rectangular space, which includes living, dining, and kitchen areas and features a vaulted ceiling and poured concrete floors. A south-facing glass wall of double-paned Pella windows and sliders opens onto a covered concrete porch. “The whole atmosphere of the room will change with the passing of the weather,” Page notes. “Even when you get clouds across the sky, or shards of light hitting the surface of the water, or just the wind blowing patterns in the pond or swaying the branches. It’s just a wonderful, protected space that allows you to participate in all that.”

In the great room’s northern corner, the kitchen features appliances hidden behind walls of Reform cabinetry finished in a smoked oak veneer. Gray tiles form a backsplash, and textured granite countertops contrast with pendant lamps from a Russian flour mill, refurbished by FIXT Electric. A ladder leads to a loft space over the kitchen that serves as a playroom and guest room. At the back of the loft is a workspace where Page displays the house’s scale model. 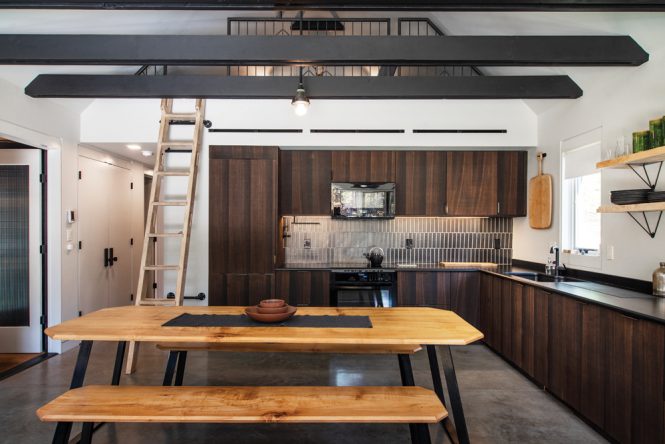 A ladder leads to a loft space above the kitchen that contains Page’s office and a space that serves as a playroom and guest room; the kitchen features appliances hidden behind Reform cabinets, textured granite countertops, and a FIXT refurbished pendant lamp from a Russian flour mill.

Page turned felled ash trees, lined with the grooves of beetles’ pathways, into stools and side tables for the living area and used downed sugar maple to build a dining table and benches, shelving throughout the house, and built-in book shelves along an interior hallway. 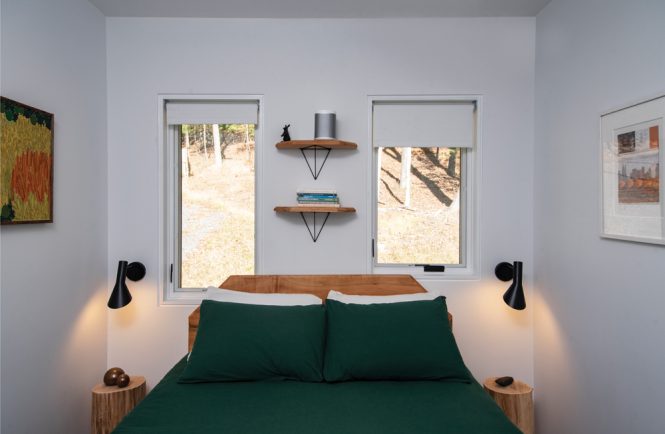 One of the home’s bedrooms.

The “juxtaposition” of living in both the city and country has turned out to be “an incredible experience,” says Page, so much so that the family’s schedule revolves around the cabin. Every Friday night, at 8pm, when city traffic ebbs, he and Stecker put their pajama-clad sons in their car seats and begin the two-hour drive north. They arrive in the dark, carrying the sleeping kids to bed. The weekend of “playing, cooking, and entertaining” begins on Saturday morning with an “expansive feeling,” he says. “The fully glazed south facade of the house overlooks the pond and surrounding forest,” keeping the cabin’s “atmosphere in constant change over the course of the day, weather, and season.“ 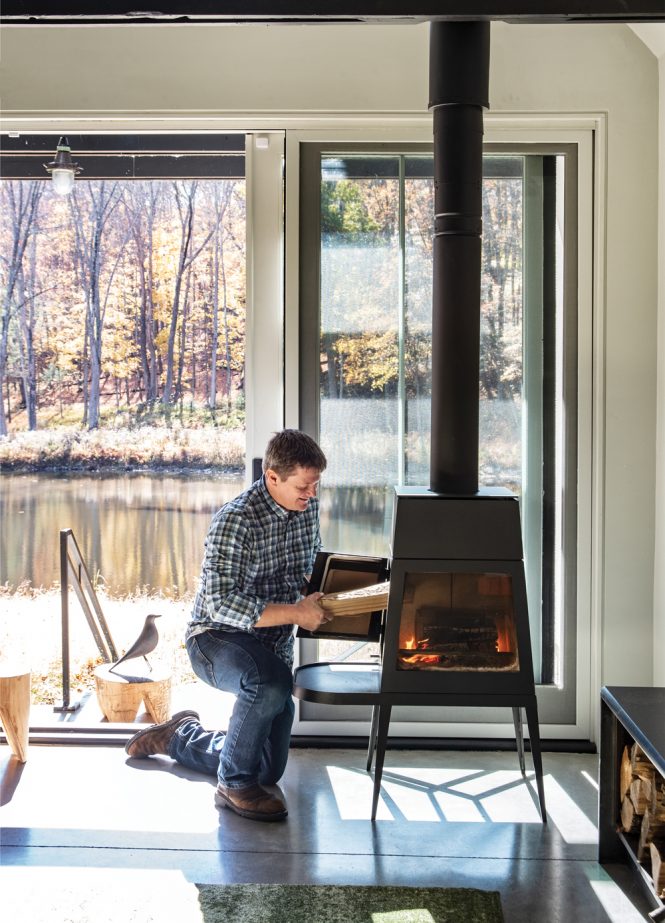 Page uses wood from his own property to make furniture, such as the stools shown here, and to feed the wood-burning stove, situated in the far corner of the living area, which warms the house.

Initially, Page and his family would return to Brooklyn late Sunday afternoon, but these days they depart at 5am on Monday and arrive in time for work, school, and preschool. “It gives us a full weekend upstate,” he says. “We feel like we’re in an endless wilderness here. We feel we’re a world away.”