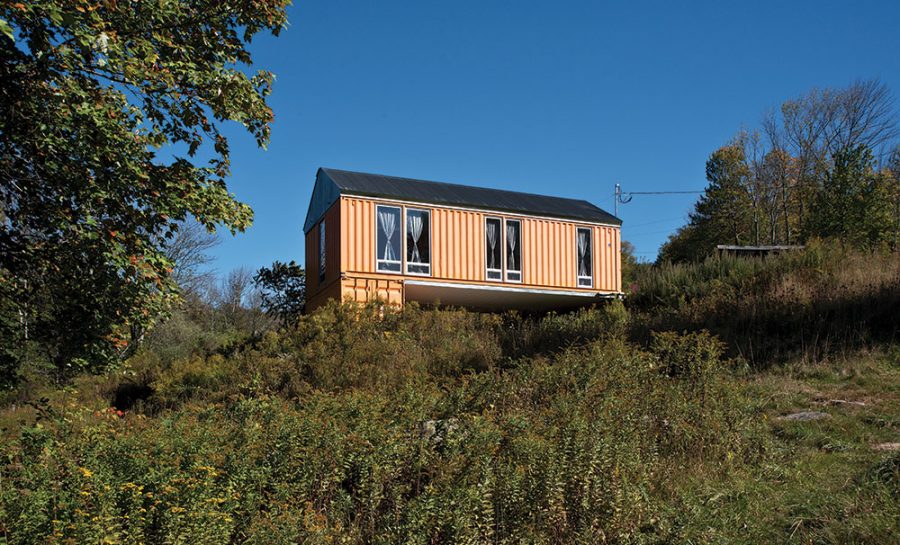 [THE EDITORS OF UPSTATE HOUSE CHOSE TO PROFILE THIS HOUSE AND HOMEOWNER. THE FEATURED HOUSE IS NOT FOR SALE.]

In 2006, Robyn Volker and her wife Anke Irmscher were living in a co-op building in the East Village when they decided to buy a property in Livingston Manor, a Sullivan County hamlet. For the next few summers, the couple lived in a 250-square-foot teepee on their six acres of paradise while deciding what kind of permanent structure to build. “We thought about earth berm houses and prefab models,” Volker says. “We knew we wanted something different and hopefully something affordable.” Volker was working on a project basis with her city neighbor, designer Tim Steele, when he began toying with the idea of building shipping-container homes. “I had been designing offices with the architecture firm Bigprototype, and we were both excited about the prospect of building one,” Steele recalls. When Volker and Irmscher expressed interest, he jumped at the chance to design his first one. 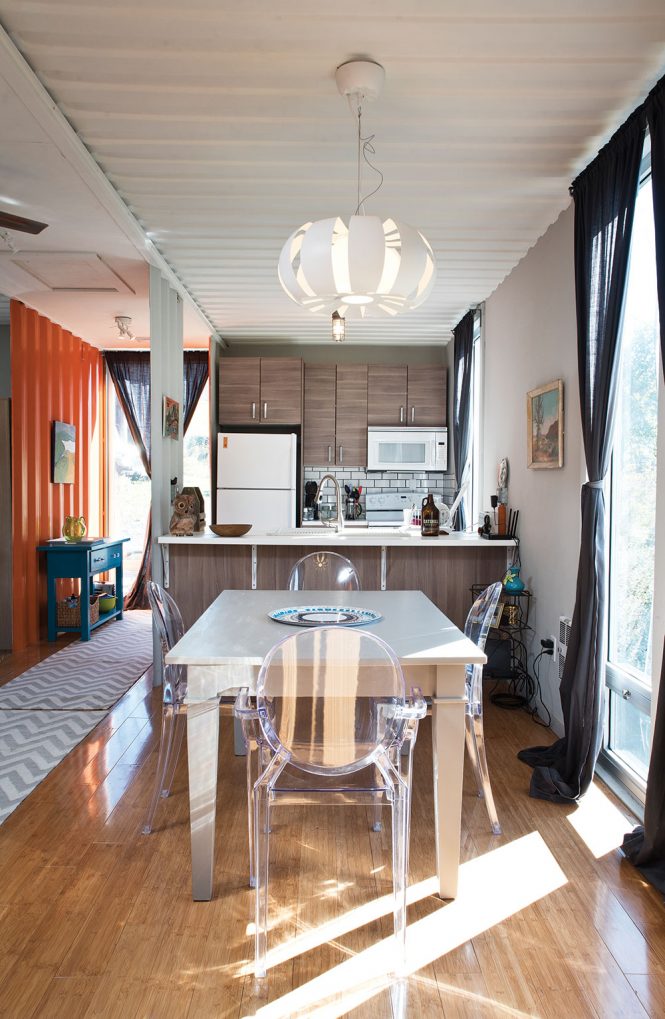 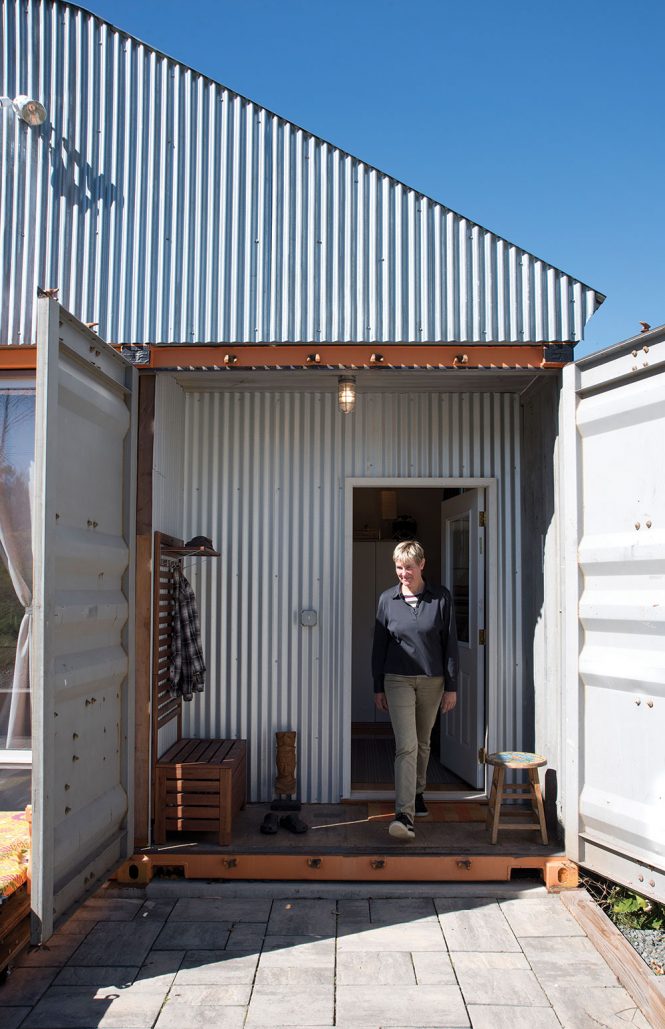 Sturdy and stackable, shipping containers were hailed as the perfect solution to the challenge of transcontinental cargo when they were invented in the 1950s. It took a few decades before anyone could see past the freight potential and conceive of the containers as building blocks. But in 1987, Philip C. Clark filed for a US patent to create a “habitable building” using shipping containers, paving the way for a generation of architects. Since then, shipping containers have been used around the world as housing for low-income residents and students, emergency shelters, and school buildings.

Well, not quite. The building process, which began in 2009, was a drawn-out affair, taking the better part of five years. Volker and Irmscher opted to finance the whole endeavor in cash, so construction necessarily happened in spurts. 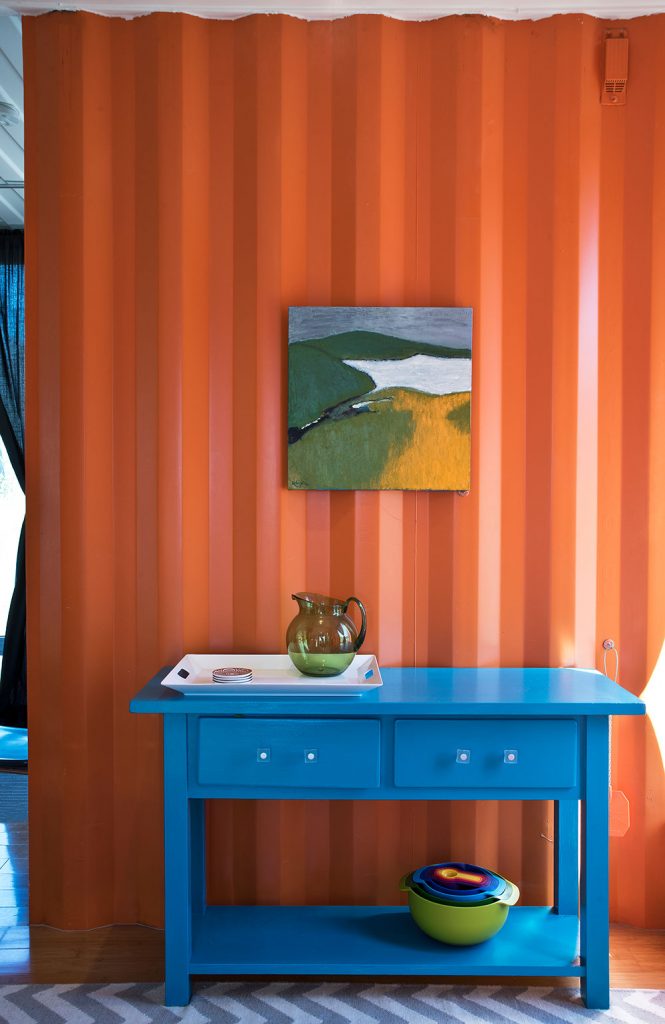 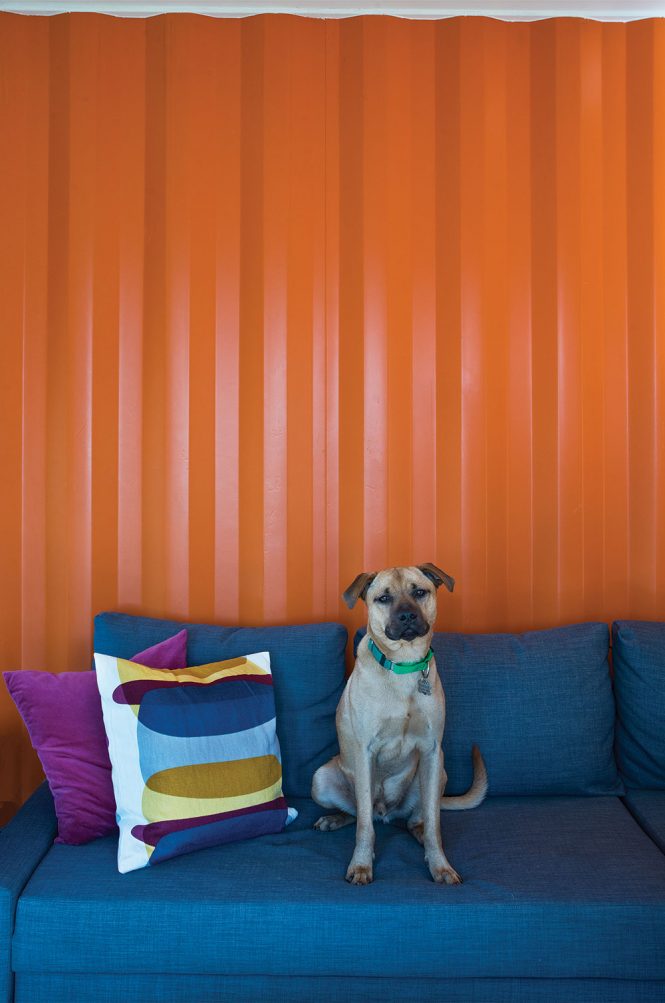 As with any house, the first phase of the process was its design. “We had a unique feature on our property—the hill—which was really the prettiest point, with nice vistas of the Catskills,” Volker says. “We decided to build into the hill, which was an idea that the architects drew from the initial discussions when we were still looking at earth berm houses.” The couple settled on an open-plan, 800-square-foot, one-bedroom design to be built out of two 40-foot shipping containers, propped up by the hill on one end and an additional 20-foot container on the other.

With the design finalized, the team headed to the Port of Newark to pick out the containers. “I was interested in the whole process, so I went along for the ride,” Volker says. With guidance, she picked out three containers, each of which then required a fresh coat of marine-grade paint. Parsing through the limited color selection, Volker settled on bright orange. “Everything else seemed too industrial and dull. We wanted something that said, “I’m a shipping container, here I am!’”

The painted containers were then trucked upstate to Liberty Ironworkers, where all the cuts were made, before being transported to the property in Livingston Manor. With a crane onsite and the foundation ready, assembly was a straightforward affair, completed in one day. “They craned the containers into place, did some welding, and that was that. Suddenly, we had the beginnings of a house,” Volker says.

With the ironworkers gone, it was up to traditional contractors to build out the rest of the house. “That phase can take as little as four weeks for a small container house,” Volker says, “But ours took a lot longer because we paid cash for everything.” 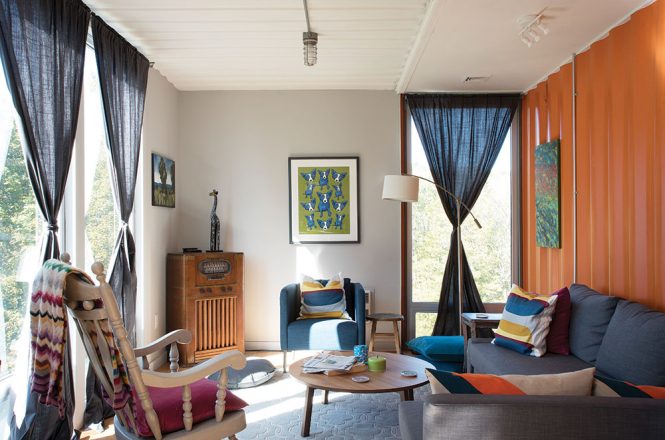 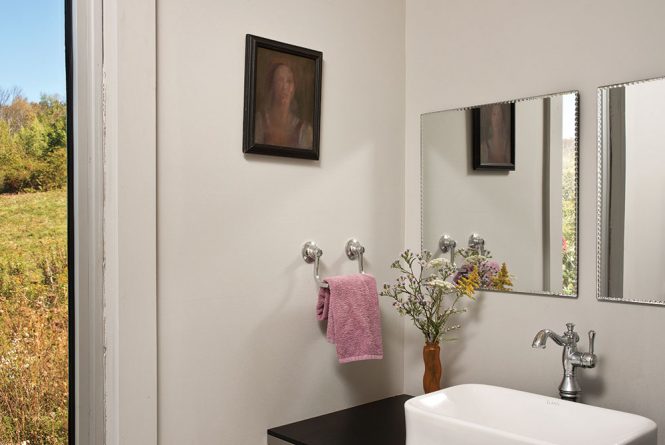 Volker and Irmscher’s house is made out of three containers. On the upper level, two 40-foot containers make up the living space. By leaving a four-foot gap between the two, the designers were able to capture space for a “hallway,” which has orange metal walls and windows on each end. One container houses the entrance, which is made of the original shipping container doors, and a small foyer, bathroom, and bedroom. The second container houses an open-plan kitchen, dining area, and living room. On the lower level, a 20-foot container, which is accessed from outside, acts as a basement, and is used for storage and to house utilities like the water pump. Closed-cell foam insulation used between the sheetrock and the container’s walls throughout the structure means the house can withstand even the coldest upstate winters.

“I have an old farmhouse, and it’s a pain in the ass,” says Steele. “Shipping container homes are very strong and relatively maintenance-free on the exterior. Plus, there is this vibe about them—they are very solid and permanent, but they’ve been all over the world, which creates a dynamic tension.”

Volker and Irmscher’s home has a modern, Scandinavian feeling, thanks to its bright orange color, straight edges, and corrugated surfaces. The building pops against the rolling green hills of the Catskills. “The juxtaposition of the industrial and the pastoral is nice,” Steele says. “But it also reflects the vernacular of industrial farm buildings, so it is not totally out of place, just set off nicely.”

Volker has embraced the industrial/pastoral juxtaposition and brought it indoors by decorating in a style she calls “farm industrial.”

“Obviously, the house has a very industrial and modern feel to it,” she says, “but we also are in dairy country with farms all around us, so the idea was to pay attention to both of those things.” She points to the kitchen with its modern appliances, farmhouse sink, and barn-wood cabinetry. The dining room sports a similar contrast with Lucite chairs set around a vintage farm table.

Volker is now the vice president of operations for Tim Steele Design. After designing Volker and Irmscher’s home, Steele established a spin-off design/build firm called Steele House, which specializes in container homes. The firm has built three other shipping container homes in Sullivan County, and is in the process of developing modular designs that can be built quickly and cheaply.

Volker and Irmscher now live in Jersey City. In the warmer months, they head upstate two to three weekends a month. Irmscher, a native of Berlin, works as a German translator, a job which she can bring upstate whenever she needs some time away from the city. In Livingston Manor, Volker and Irmscher spend much of their time outside—sitting on the stone terrace out front, cooking over a fire pit, or lazing in the hammock slung beneath the house.

“We’re coming from an apartment in the city, so just the idea of having a whole house to ourselves is a novelty,” Volker says. “In the evening, we just look out over our meadow and watch the fireflies or the bird show at dusk. We’re just really enjoying the house that took us so long to build.” 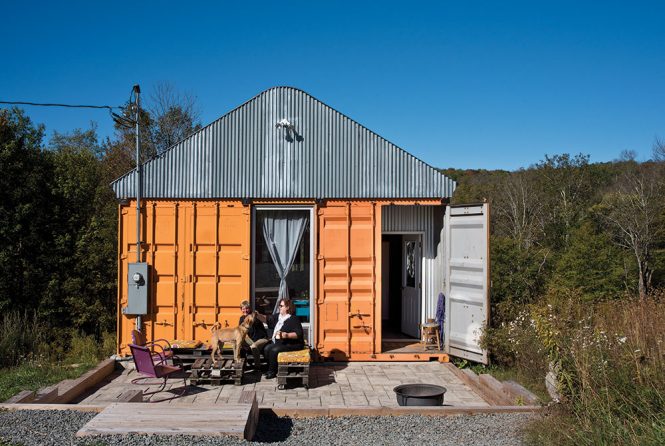 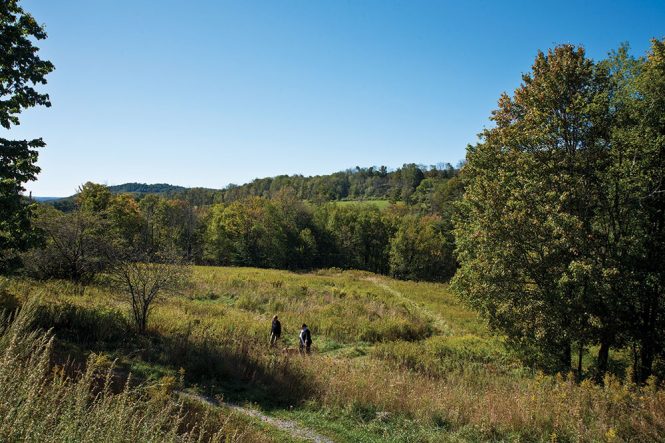