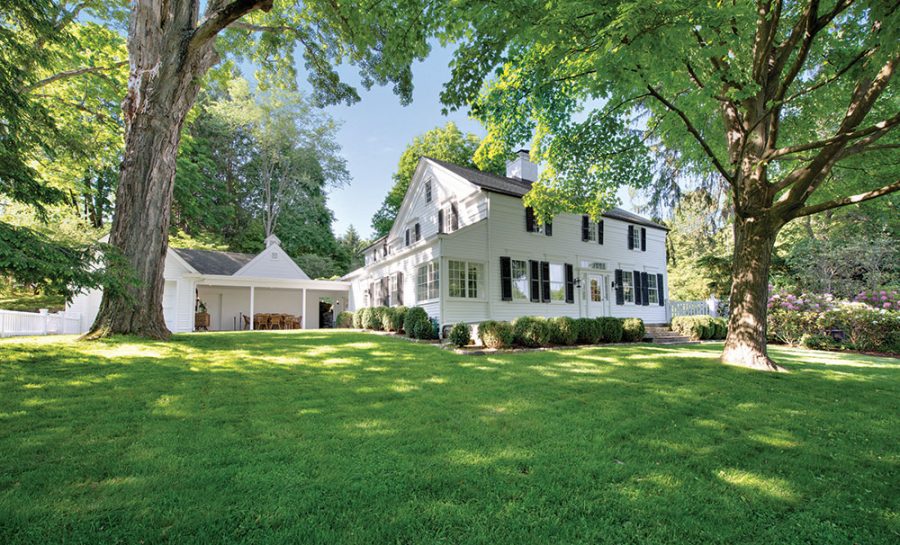 The home of one of America’s first spies holds as many intriguing details as it does luxurious amenities. Spy Hill, a Colonial estate, is situated on four acres overlooking the Middle Branch Reservoir in the southern Putnam County village of Brewster. Amid its picturesque landscape of rolling hills sits a faithfully restored 1789 house that its developer says George Washington awarded to patriot Enoch Crosby for his heroism.

Having grown up poor in Putnam County, Crosby left his job as a cobbler to enlist as a soldier in the Continental Army. In 1776, after his unit helped invade Canada, Crosby was recruited as a spy. He was so adept at impersonating a humble British cobbler to infiltrate loyalist circles that his own family disowned him as a traitor to the Colonial cause. Captured multiple times by both Colonial and British forces, Crosby repeatedly managed to escape, and performed several key intelligence missions on behalf of General George Washington himself—and many of his activities are honored with historical markers throughout the Hudson Valley.

After the war ended, says Josh Gurwitz, whose development company, Good Property, refurbished Spy Hill, Crosby was rewarded richly for his heroism. Renowned as a kind of “patron saint of America,” according to Gurwitz, he was the subject of H. L. Barnum’s 1832 book, The Spy Unmasked; Or, Memoirs of Enoch Crosby, and he is believed to have been the inspiration for James Fenimore Cooper’s novel The Spy. Crosby’s portrait remains on display in the National Portrait Gallery in Washington, D.C. In fact, Gurwitz credits George Washington himself for having given Spy Hill to Crosby “as a gift for his efforts.” Crosby remained at the estate, raising a family there, until his death in 1835 at the age of 85. 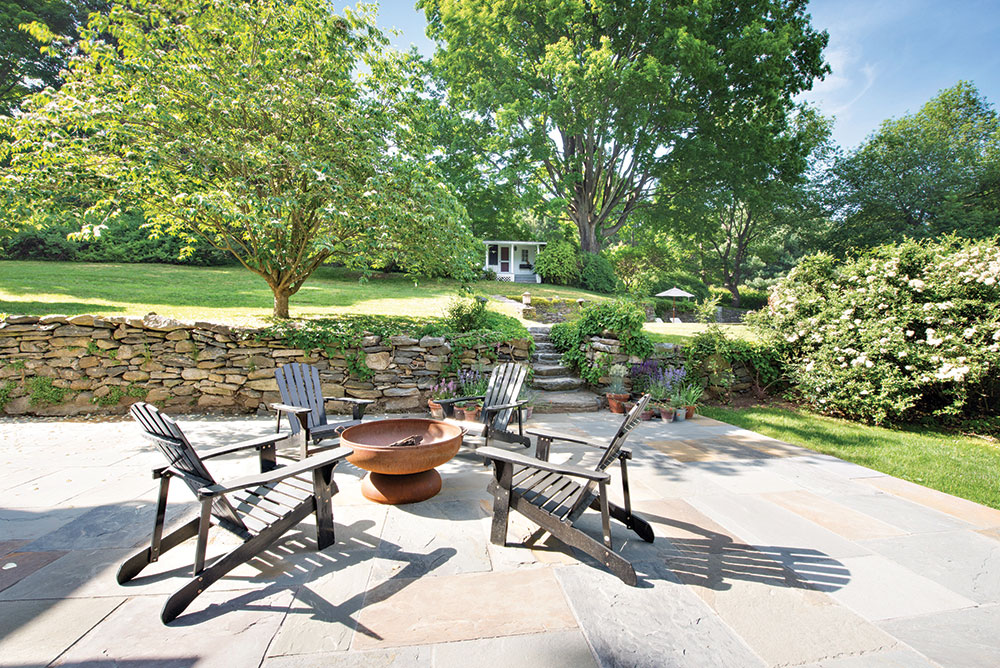 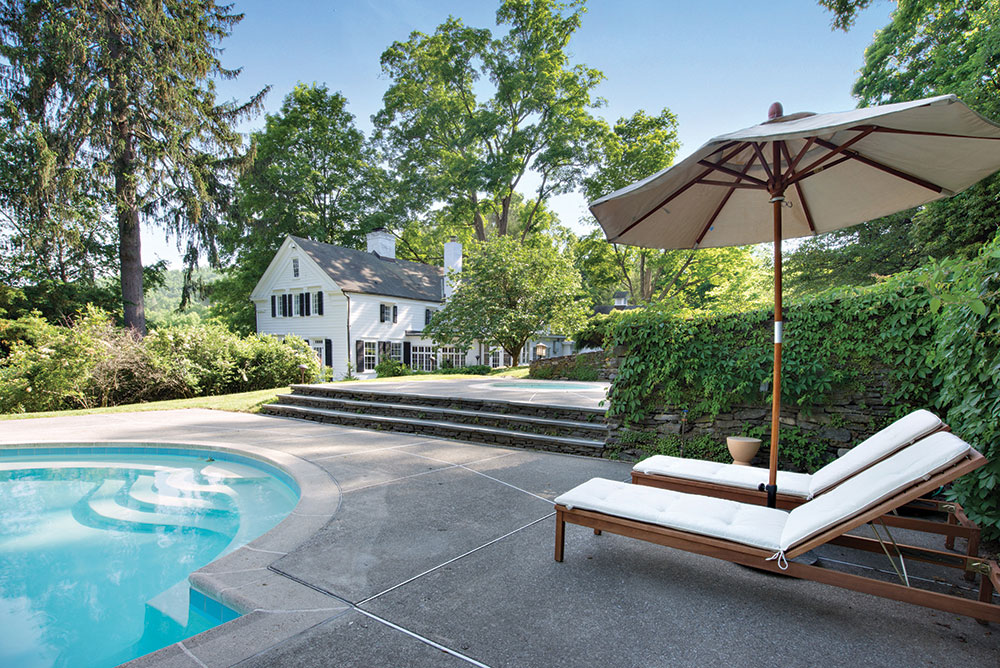 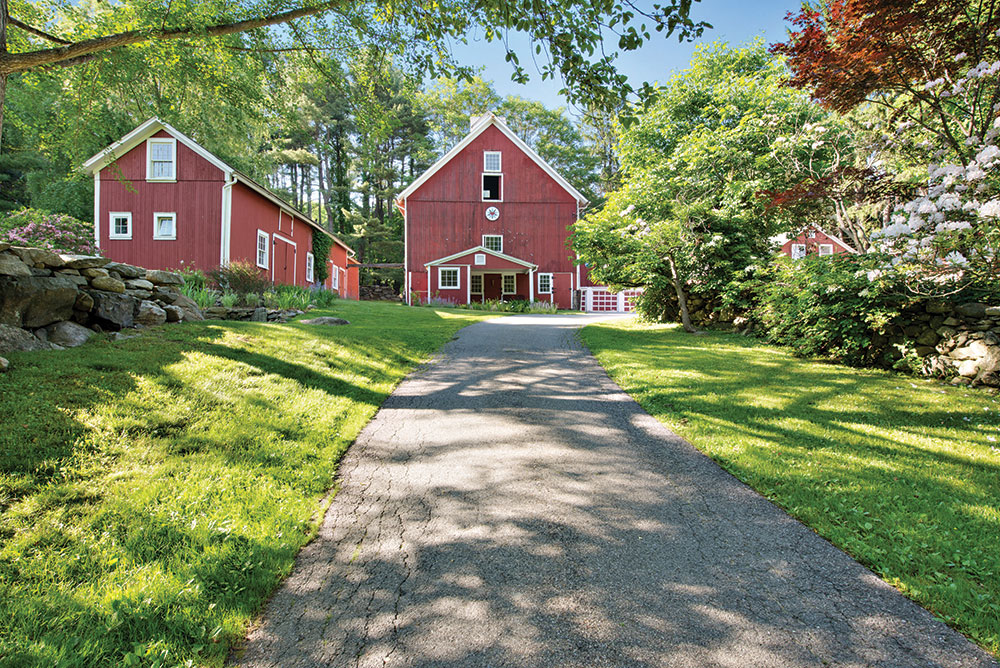 “It’s a very tranquil environment, which I think is why [Washington] gave it to [Crosby],” says Gurwitz, who has also enjoyed a respite from a busy life at Spy Hill. A native New Yorker, Gurwitz was living in an East Village loft in 2014 but frequently escaping to his family’s longtime upstate weekend home when he decided it was time to make a change. He discovered Spy Hill during an online search for a house on a large tract of land within 50 miles of New York City. “The property just did it for me,” he says.

Although Spy Hill has been renovated completely, indoors and out, with an eye toward luxury, Gurwitz has been careful to keep its history intact. The 3,000-square-foot main house has retained its original beamed ceilings and moldings throughout, as well as its four original fireplaces (the chimneys of which have been rebuilt and refitted with new dampers, their surrounds covered with Ann Sacks Clodagh tiles in charcoal and cream). Three fireplaces are situated on the first floor in the great room, dining room (which also features a reading nook), and library. The fourth fireplace is in the upstairs master bedroom, whose en-suite bathroom features a vintage clawfoot tub, Kalista fixtures, and Ann Sacks Japanese handmade tiles. The second floor also includes two additional bedrooms and two more full bathrooms. Downstairs, the powder room features a vintage vanity with a stone top s well as vintage lighting fixtures.

The light-filled kitchen, renovated in authentic Colonial style, has been updated with top-of-the-line appliances, including a Viking range with a double convection oven, a Sub-Zero refrigerator/freezer, and a Miele dishwasher.

The main house’s generous veranda is rife with possibility for outdoor entertaining, and the house sits within the perimeter of a charming white picket fence that encloses a fully landscaped and lit backyard featuring a 40-foot-long, heated, in-ground pool.

A two-story, 1,500-square-foot guest cottage, featuring one bedroom and 1.5-baths, could be used as an office or studio. In renovating the cottage, Gurwitz left the original foundation exposed and retained the original wood floors. The cottage’s kitchen features custom-designed cabinetry and countertops as well as a Bertazzoni range with convection oven, a Miele dishwasher, and an under-the-counter refrigerator.

Also on the lush, tree-filled property are a number of outbuildings, including an early-19th-century, 3,000-square-foot barn remaining from the property’s years as a dairy farm; a fully operational greenhouse; a yoga studio; a workshop; and a root cellar. 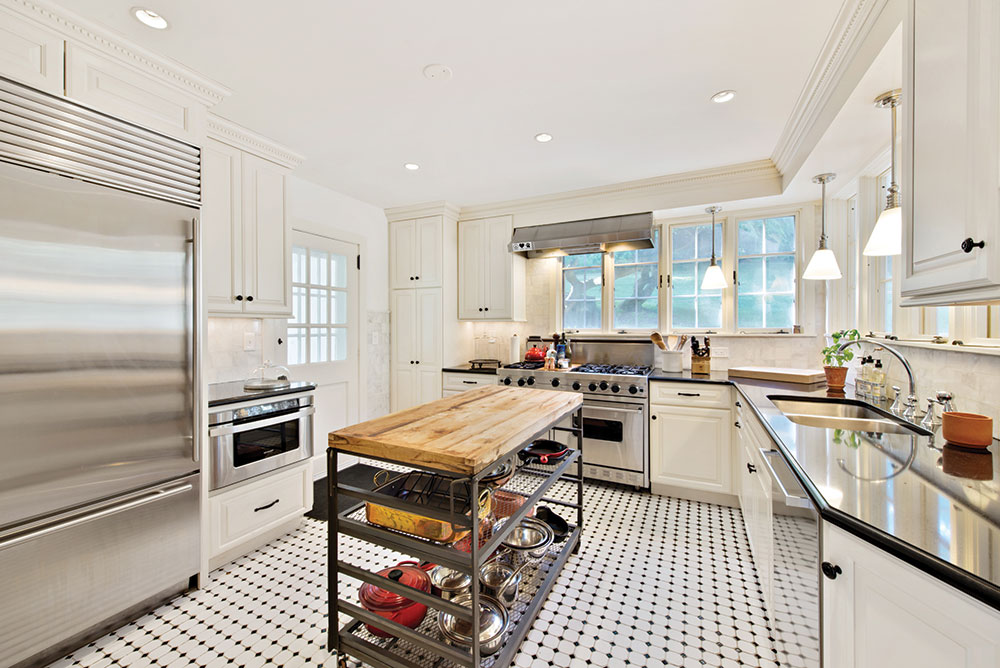 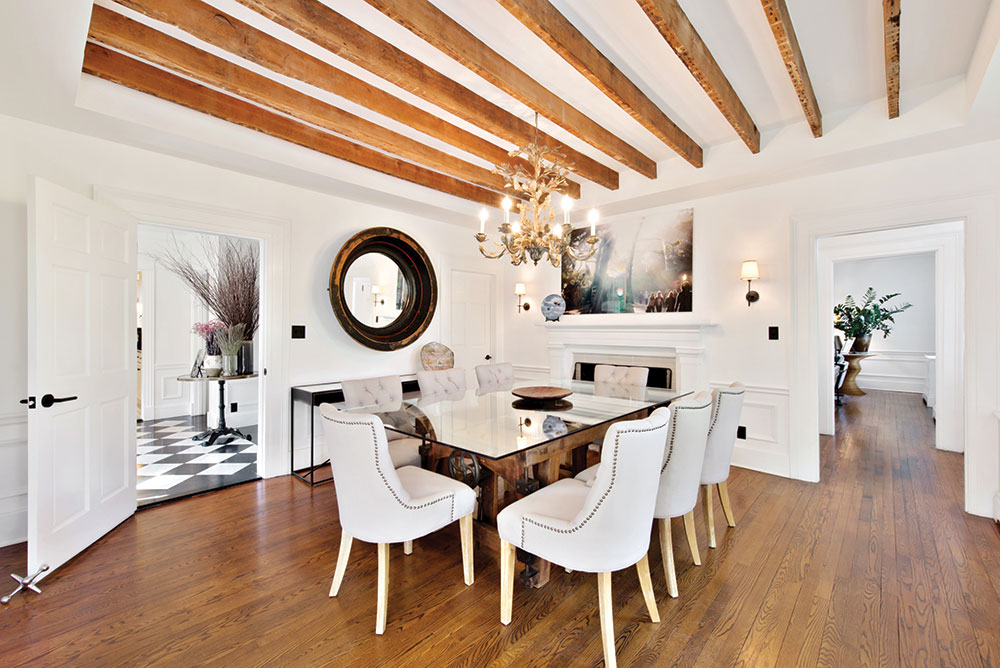 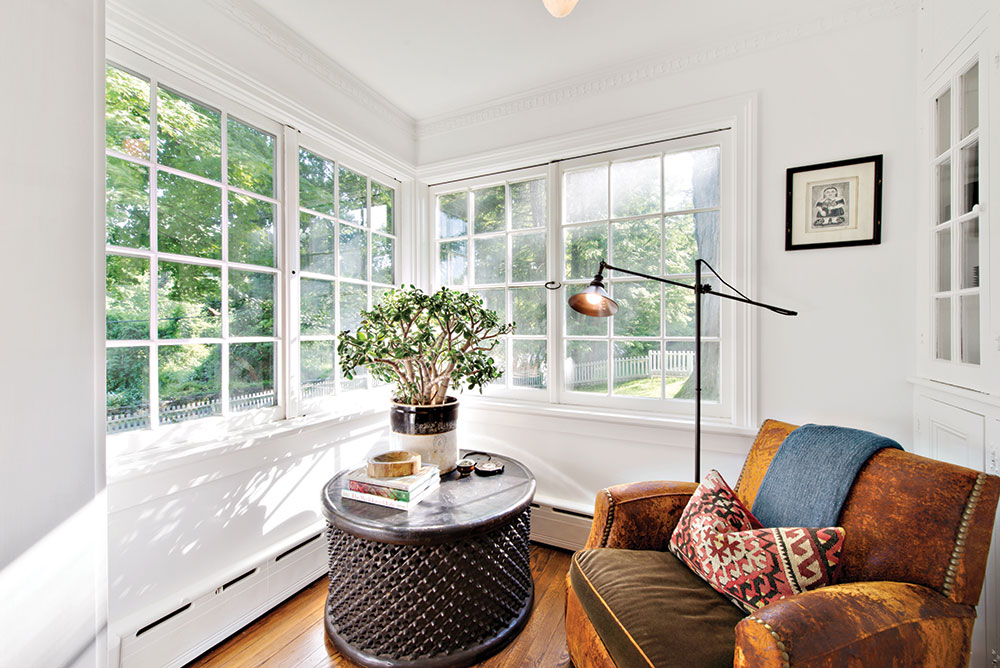 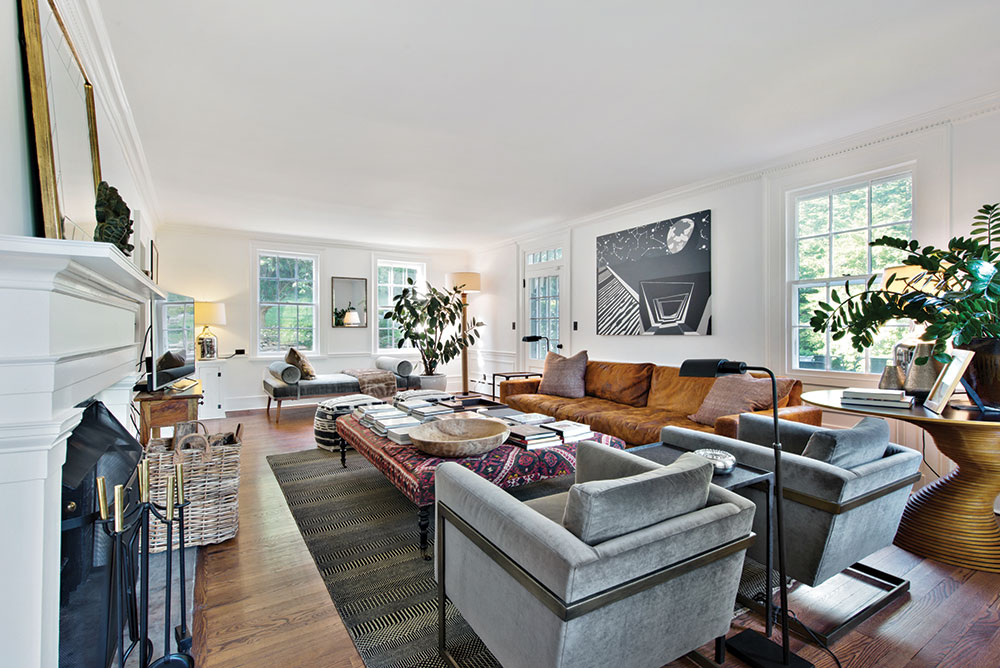 “The property has been brought back to life,” says Gurwitz, who studied at the New York School of Interior Design and worked for several acclaimed firms before founding Good Property in 2009. Gurwitz also has extensive experience with historic restoration and landmark preservation, and says that renovating Spy Hill was “a real honor—it was so positive to be bringing back something that had started to be forgotten.”

Located just a short drive from the Brewster Metro-North train station, Spy Hill offers easy access to New York City, says Gurwitz. “It would afford someone a lifestyle of real privacy and relaxation, but the train to the city only takes a half hour,” he says. “The area has a really wonderful historic fabric, and it feels very special. Everyone who comes here says it’s incredibly peaceful.”