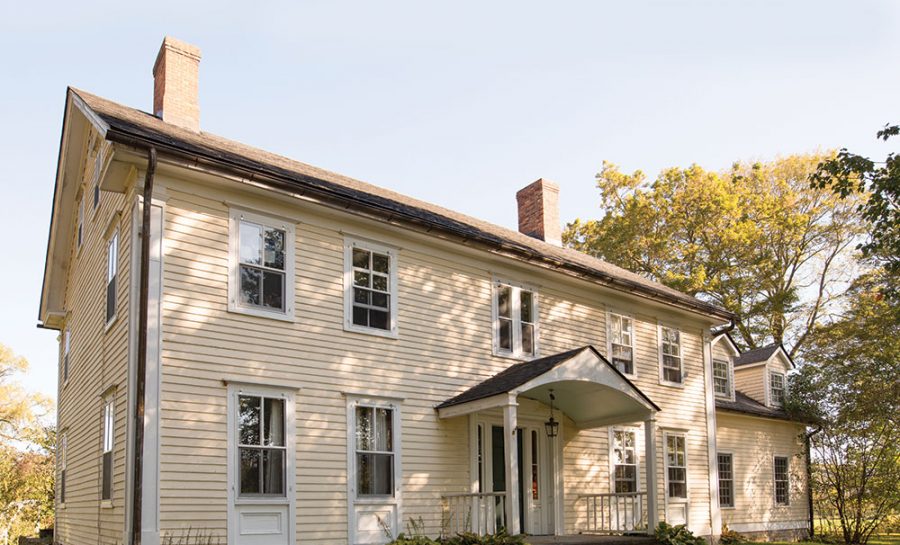 [The editors of Upstate House chose to profile this house and homeowner. The featured house is not for sale.]

In 1989, Leslie Farhangi took a house-hunting trip on a lark with her then-boyfriend, John Tuke—nothing serious, just an excuse to get out of New York City. And on their last day upstate, everything changed. Immediately upon entering the Dakin-Coleman House, a Colonial farmhouse in the Dutchess County town of North East, they looked at each other and said: “This is the one.”

“I don’t recommend buying a house like that,” Farhangi laughs. “But we just had a connection right away.” And that connection has endured all these years: Farhangi, a retired lawyer, and Tuke, who is CFO at the nearby Hotchkiss School, married and raised three sons, now ranging in age from 14 to 23, in the house. Having multiple sons comes in handy when there’s mowing to be done, jokes Farhangi—and since the 4,000-square-foot house, built in 1790, sits on 200 acres of land, there’s always plenty of mowing to be done. 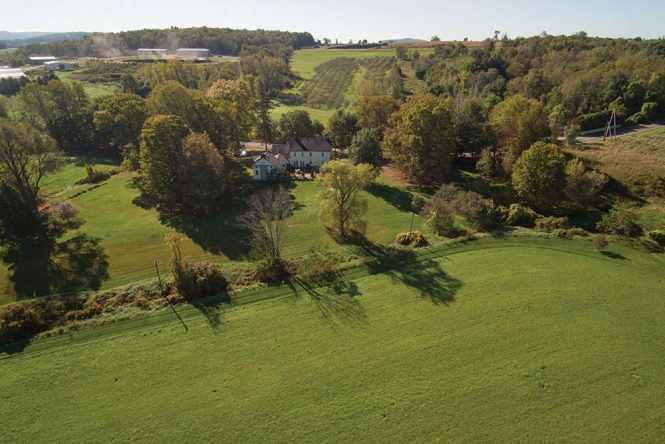 The property lines in historic Coleman Station have remained the same since the 1700s.

With the help of architect Leonard Baum, who specializes in Colonial restorations, and archival information courtesy of the house’s status on the National Register of Historic Places, the couple restored the house to its original state, as nearly as possible, by removing 20th-century bay windows; reopening built-over doorways; and using salvaged wooden flooring, support beams, cold-storage doors, and antique kitchen equipment to create a working 18th-century home with minimal updates.

Although the 125-year-old antique stove had to be installed upon a custom-built platform to compensate for the fact that people were a lot shorter back in the 1890s, its timeless quality has made the kitchen the home’s lodestar. “What I like about the stove,” says Farhangi, “is that it’s neither in style or out of style”—an apt description of the entire house. “I watch HGTV, and I love the new kitchens they always show, but in 10 or 20 years, all those kitchens are going to look dated.” The 19th-century stove peacefully coexists with an 18th-century farmhouse sink and a contemporary tiled backsplash, along with custom-built Colonial-style dark wooden cabinetry. 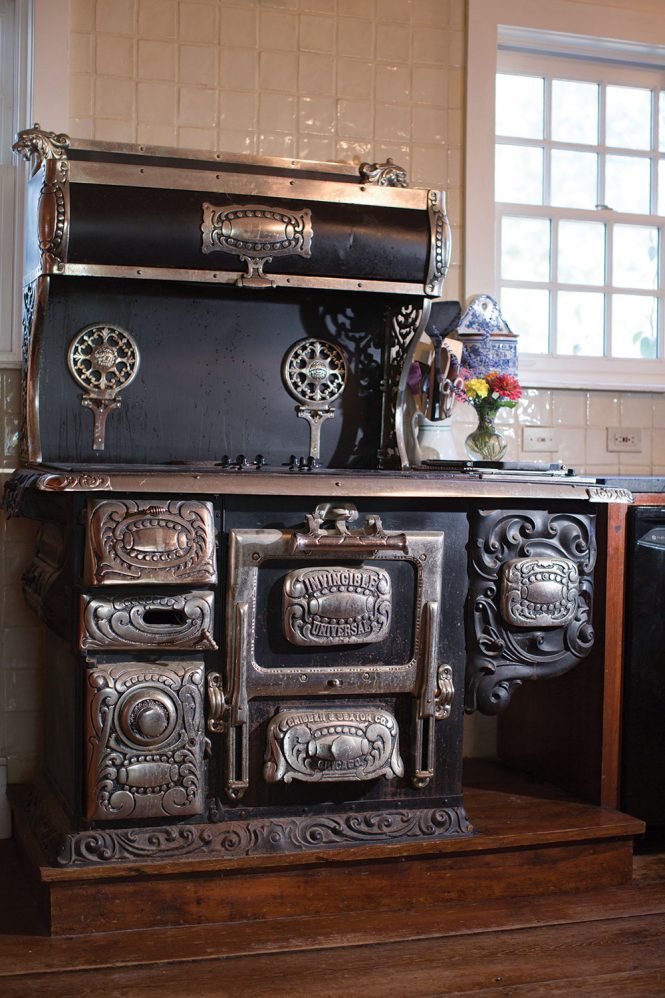 The elaborate antique kitchen stove, says Farhangi, is “neither in style nor out of style.”

The living room, adjacent to the kitchen, continues the Colonial theme with a regal fireplace framed in brick and luxurious leather chairs, but features a contemporary cathedral ceiling. The room’s warm-toned wood finishes connect the Colonial and modern eras; it’s only after spending time there, soaking up the ample light from its high windows, that the tall ceiling seems unusual for the Colonial era. Built in 2002, the living room’s height provides a welcome relief from the low 18th-century ceilings throughout the rest of the house. When viewed from the outside, the addition fits right in, as if it has been there for 200 years, despite the backyard courtyard with its modern grills, contemporary patio furniture, and soccer equipment. “My goal is that a hundred years from now, people will still think that the addition harmonizes with the rest of the house,” Farhangi says. 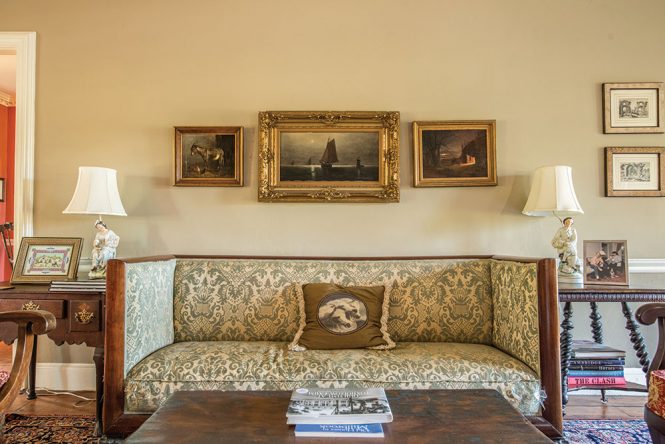 The original front hallway, which is far wider than most Colonial hallways, was a mystery to Farhangi until she discovered the remnants of a beehive oven in an upstairs bedroom. This told her that the house was originally a two-family residence, and the extra-large wooden front door served as an entrance for both families. “The thinking is that they drew an imaginary line down the hall,” she explains. “One family lived on one side of the hall and the other family lived on the other side of the hall.”

Today, the stately green hallway makes for a dramatic entrance. But Farhangi says her family prefers to enter the house from the side through the mud room, which features a bevy of windows, white wainscoting, and sunny yellow walls.

Upstairs, the four bedrooms and three bathrooms have been returned to their classic state without being made to look precious. That’s especially true in Farhangi’s sons’ bedrooms, where book stacks, athletic equipment, and posters share space with 18th-century furniture. One bedroom features a mural depicting the local landscape in the 1920s, a brick fireplace, and an antique rug. The master bedroom has a cathedral ceiling built with salvaged wooden beams, pale blue walls, and white cabinetry. The white, wooden-walled bathrooms each include modern cabinet sinks and showers along with Colonial artwork hung from picture rail moldings. 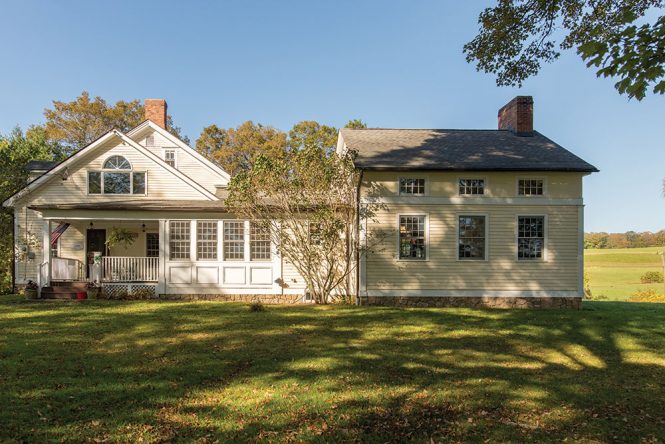 “My goal is that 100 years from now, people will still think that the addition harmonizes with the rest of the house.” – Leslie Farhangi 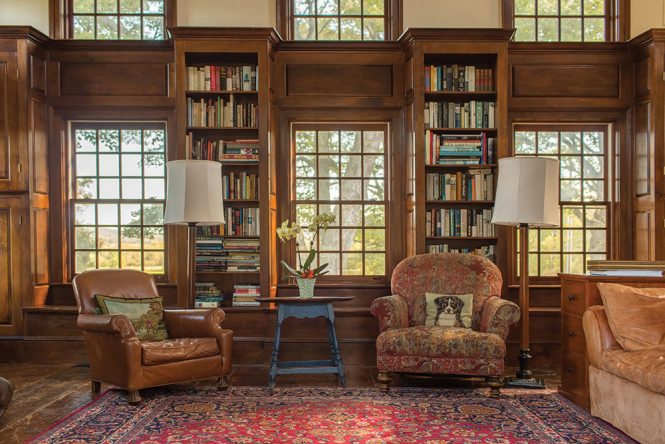 An early 21st-century addition was inspired by late 18th-century style.

These days, Farhangi keeps busy on the property with a 300-foot-long row of peonies that were planted on the property long before she moved there. Every June, she says, a breeze blows down the rolling meadows surrounding the house, cooling it without any need for air conditioning—in the 18th century, she notes, “They really knew how to site houses”—and spreading the peonies’ scent throughout the property and the house.

Farhangi’s Peony Vodka is flavored with tinctures she created from the peonies that grow in her front yard.

Farhangi finds the scent so intoxicating that she bottles it. In 2014, she and a local herbalist made peony tinctures to create Peony Vodka, which is distilled in Kentucky and available throughout the region. Its subtle peony flavor is designed to convey the feeling of a crisp, early summer evening in a Hudson Valley garden. 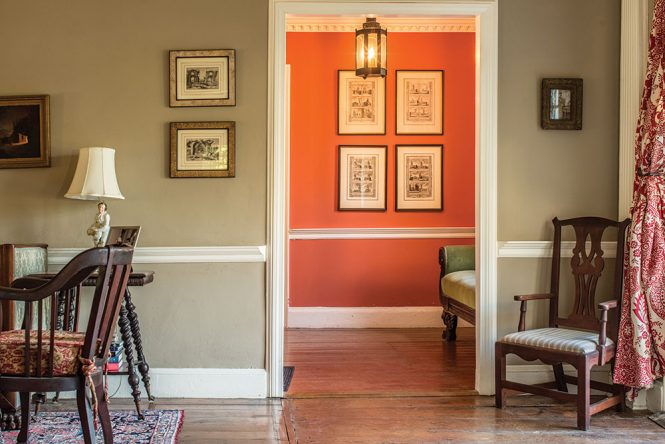 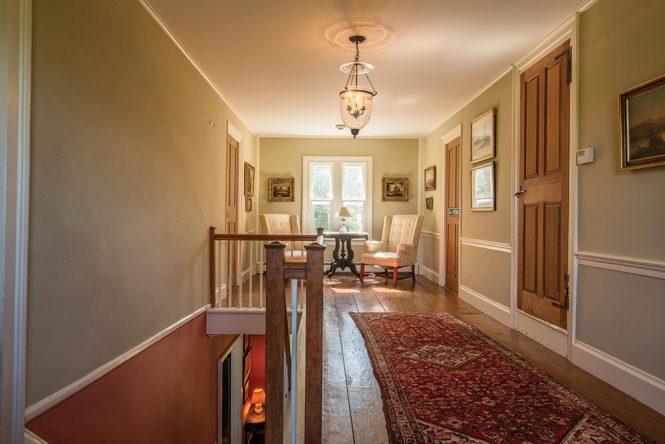 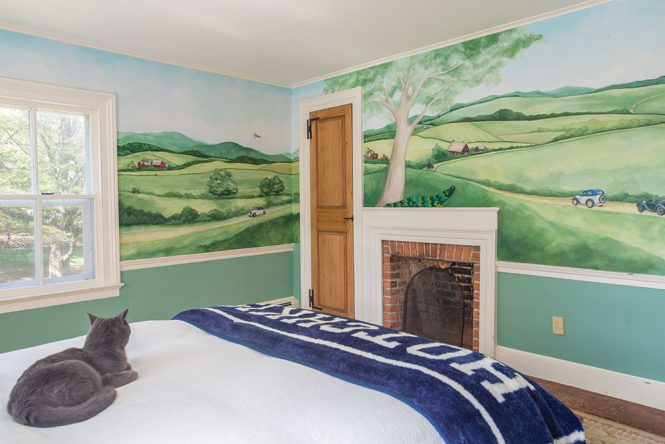 One of the sons’ bedrooms features a mural of the local landscape int he 1920s.

The property features two wooden barns—one built in 1790, the other in 1845—that serve distinctive purposes. The older barn, with sunlight streaming through its wooden slats, came stored with discarded antique materials and furnishings that were used in renovating the house, while the 19th-century barn houses Farhangi’s other business: boarding retired horses. “The horses can hang out here and enjoy their golden years,” she says.

The horses also help restore the property to its original purpose as a farm—which Farhangi and Tuke are passionate about protecting. In 1993, they worked with their neighbors to create one of the few rural historic districts in the state, the Coleman Station Historic District, which consists of their property and seven other farms whose boundaries haven’t changed since the 1700s. And the couple also had a conservation easement put on their property to prevent any future development. “We just love all of this so much we want to protect it,” Farhangi says. “I want it to survive into the future as it is now. Of all the things I’ve done in my life, including volunteering and raising my sons, this is what will probably have the greatest impact in 100 years, and that’s very meaningful to me.” 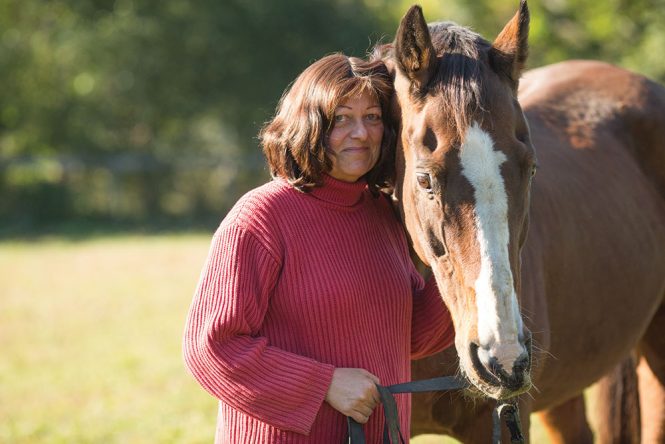 Farhangi and one of her equine residents. 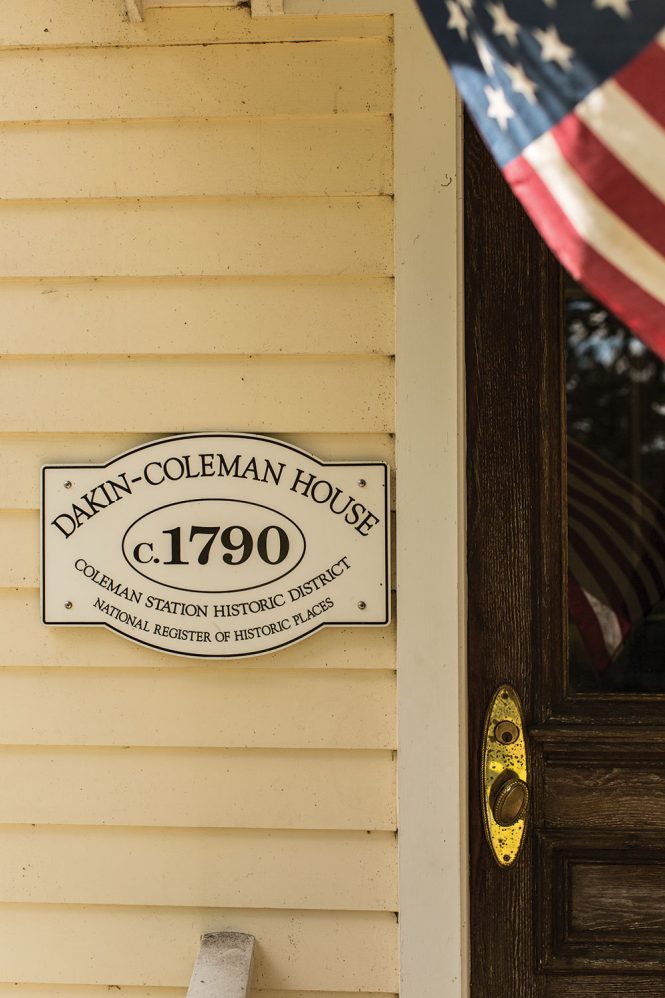 The house proudly displays proof of its historical status.