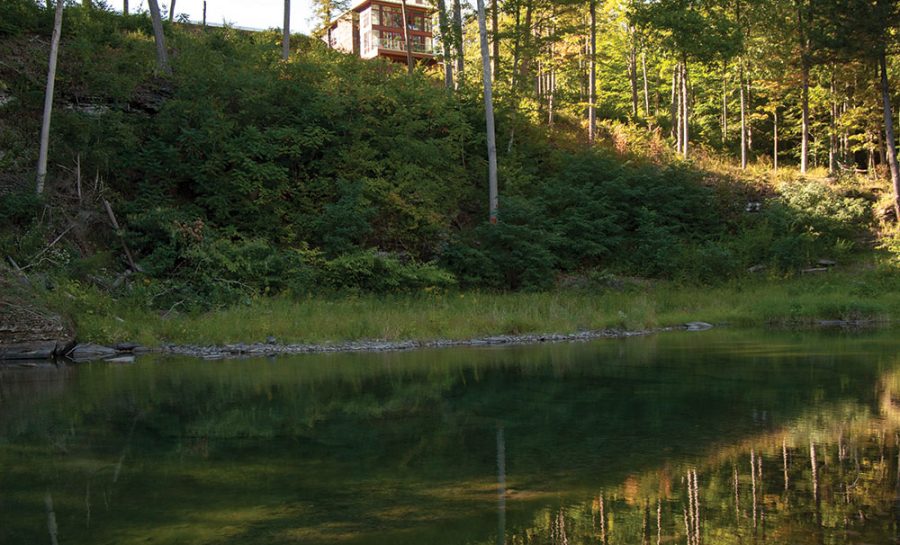 Many people wait until after retirement to figure out the next phase of their life, but for Michael Moy and Joseph Sniado, building a rural retreat for their golden years was a long-term goal. Soon after the couple met 21 years ago, recalls Moy, Saniado shared his plan to retire as chief information officer at Standard and Poor’s in New York City when he turned 55. “And he actually did,” says Moy. “He turned 56 two months after he retired.”

By then, Sniado and Moy had built High Rock Lodge in the Greene County town of Durham. Construction on the house began in 2010 and took two years to complete, after which the couple lived there part-time, commuting from their penthouse apartment in Jersey City. In 2014, Sniado and Moy, who was a creative director for a cosmetics packaging company, moved upstate full-time.

The 117-acre property sits above a dramatic bend in the Catskill Creek. Moy and Sniado were drawn to the property’s creek frontage, 1840s stone trestle bridge, and unusual history. In 1840, the bridge collapsed under the weight of a Canajoharie & Catskill Railroad train, killing one man and injuring several others—a disaster that’s marked by a New York State historic plaque on Route 145. Subsequently, the railroad line collapsed financially and was sold and scrapped in 1842.

When the house’s designer, architect Tim Witzig of the New York City-based firm PKSB, first visited the property, he was stunned. “And then I thought, immediately, how close can we get to the creek without making an impact and structurally remain viable? How can we make a house that’s not going to be crazy expensive?” he says.

Knowing they would grow old in the house, the couple required a living quarters on the first floor, with guest rooms above. They also wanted ample space for entertaining, an indoor pool, and for the house to pay homage to the creek and historic bridge.

Altogether, the three-bedroom, 4.5-bathroom house has 4,500 square feet of indoor living space, along with 2,000 feet of exterior decking and covered porches made of cumaru (a dense tropical hardwood), allowing the couple to host parties for up to 50 guests. 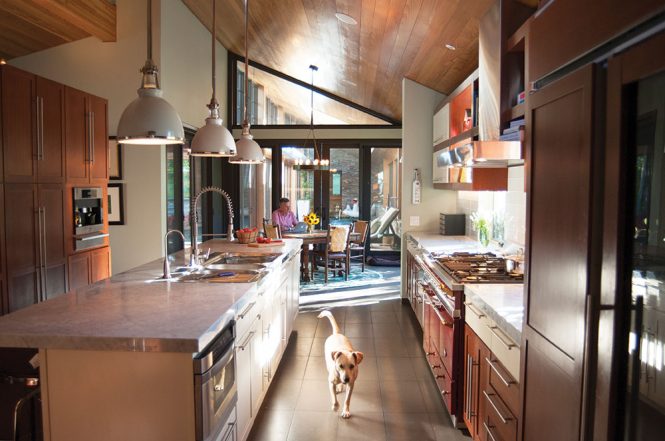 Witzig designed the house to cantilever over the creek, using a combination of piers and trusses, similar to a bridge. The house’s cruciform shape allows most of its rooms to face the creek; the other side of the house faces the forest. The cruciform’s long line begins at the nine-foot-high cedar entryway (an ode to Moy and Sniado’s former Windham log cabin and the lowest ceiling point in the house) and continues into the living room, which features a dramatic 18-foot insert ceiling made of cedar and, on either side of the room, the interior sides of the two main stone piers that hold up  the house and run from floor to ceiling. One pier frames the fireplace, while the other frames a large television, which rises up on a lift when in use and can be put out of sight so the fireplace remains the room’s focal point.

The cedar ceiling makes the room feel warmer, “similar to what an area rug does to the floor,” says Witzig, provides acoustical support, and hides the lighting returns and the apparatus that controls the draperies. The living room opens onto a deck, which, because the house is cantilevered, sits 12 feet aboveground, creating a treehouse feeling.

The first floor of the short line of the house’s cruciform shape houses a library/bar with fireplace; the master bedroom, including an en suite bathroom and walk-in closet; the dining room; the kitchen; and an 8-by-40-foot heated indoor lap pool with a dry infrared sauna and a steam shower. Upstairs are two guest rooms with full bathrooms and private decks. The basement holds a wine cellar and home office/art studio space.

The house is decorated with a mixture of modern and rustic furniture, a style Moy jokingly calls “Modirondack.” Its interior wall colors were inspired by the creek, and its brown-and-red exterior allows the house to blend in with the surrounding landscape. “We were very concerned about people feeling like there was a house looming over the creek,” Moy says. “But you really have to look for the house when you’re on the creek.” 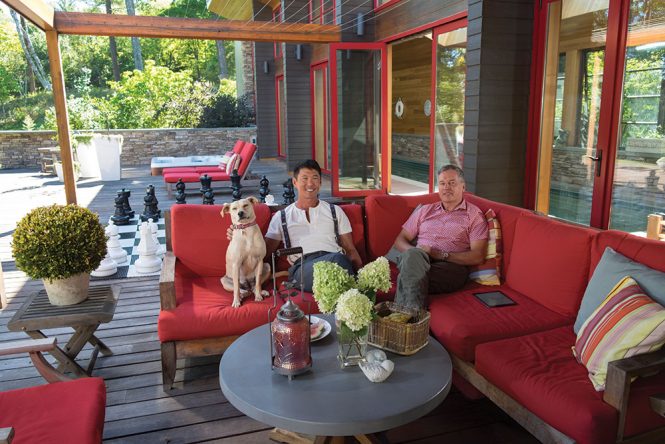 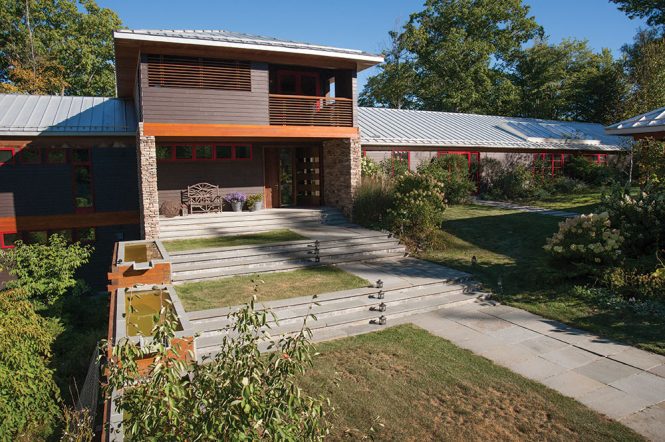 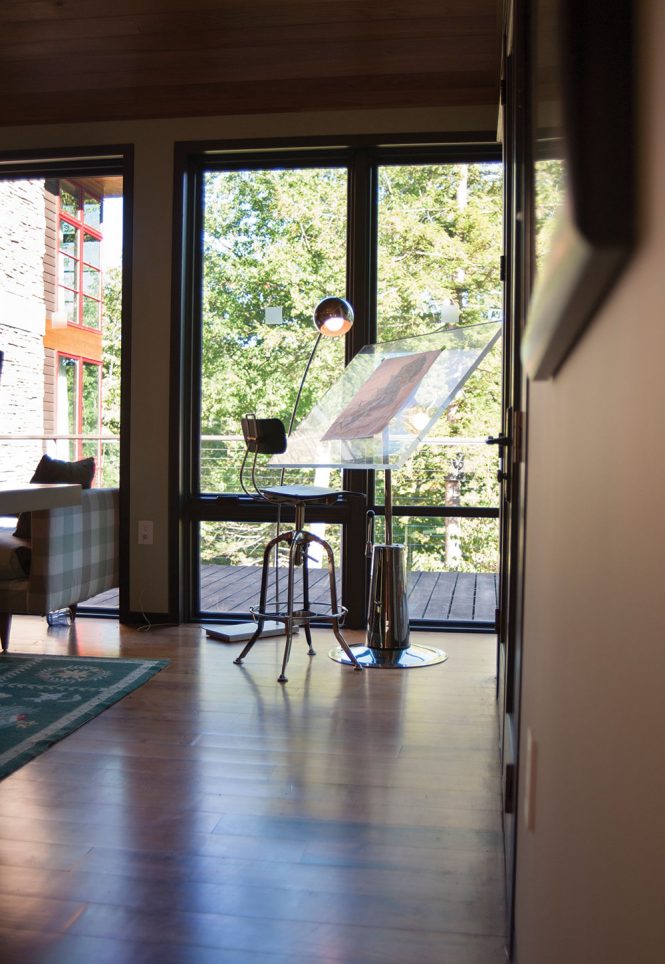 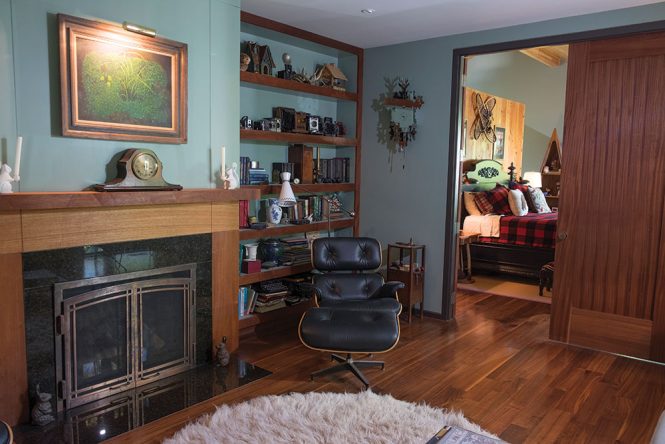 Respecting the land’s flora and fauna is important to Moy and Sniado, who take care of the entire property—including a ¾-mile gravel road, vegetable garden, orchard, barn, pond, woods, and trails—as well as a menagerie of two dogs, five Easter Egger chickens, two ducks, and two horses.  “We don’t have a gym membership, we just have this property,” Moy says with a laugh.

In their rare periods of downtime from doing chores and managing their other property, an events space in Catskill called Joe’s Garage, Sniado swims and reads, and Moy enjoys playing the piano while looking out over the creek.

The couple is making the property more parklike, connecting the logging trails to make them more accessible to hikers and equestrians, and improving the forest’s health by thinning it out and adding indigenous trees. They also hope to rebuild High Rock Bridge.

But what they love best about High Rock Lodge is its private retreat atmosphere. “I do think this place weighed in on the decision to just retire,” says Sniado. “You realize how much balance you can have up here versus in the city. Right now, I get to think about what my life should be. Before, [work] was my life.”