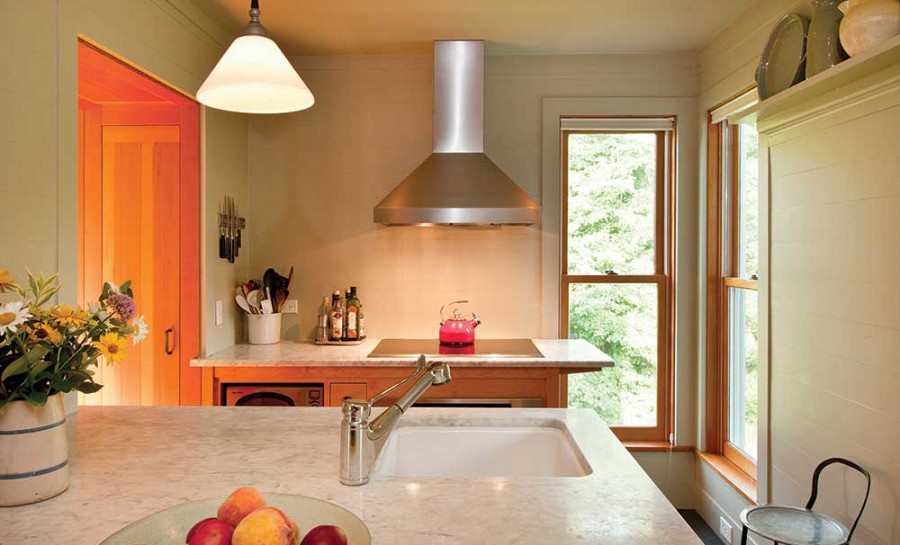 For architect Dennis Wedlick, selling the Kinderhook house he designed and has called home for over 20 years is bittersweet. A single viewing of the charming-yet-modern passive solar house makes it easy to understand why. “We’ve decided to pass it on because I’ve simply run out of ways to improve upon it,” Wedlick says.

Wedlick specializes in green architecture that employs both passive and active solar design, adhering strictly to the highest standards of efficiency in both design and construction to minimize the need for fossil fuels. His house stays comfortable all year round, with minimal upkeep and cost. “During the months of April and May we actually have no energy bills,” Wedlick explains. 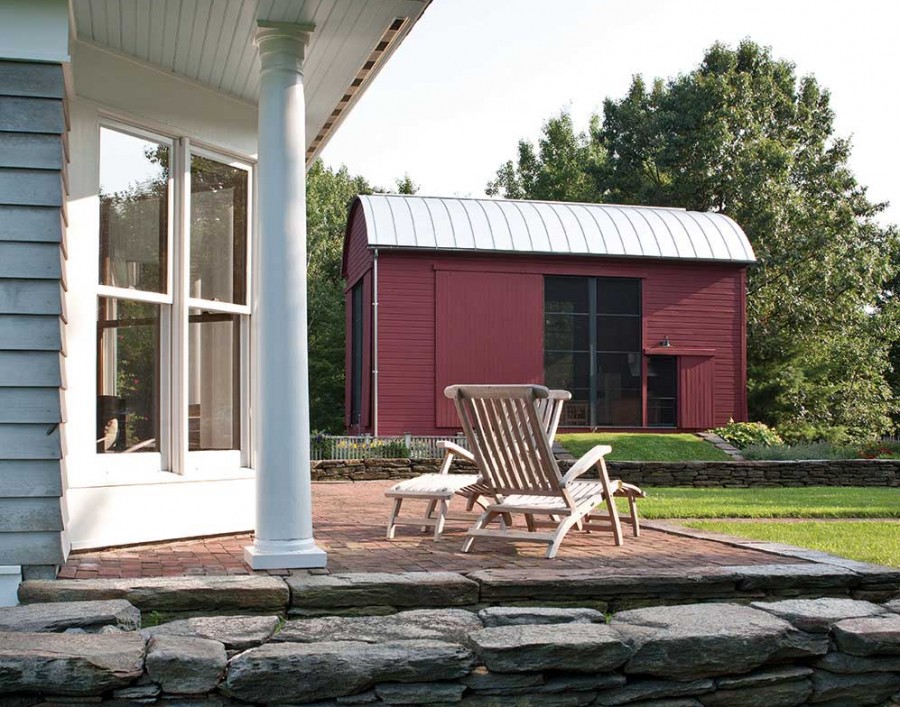 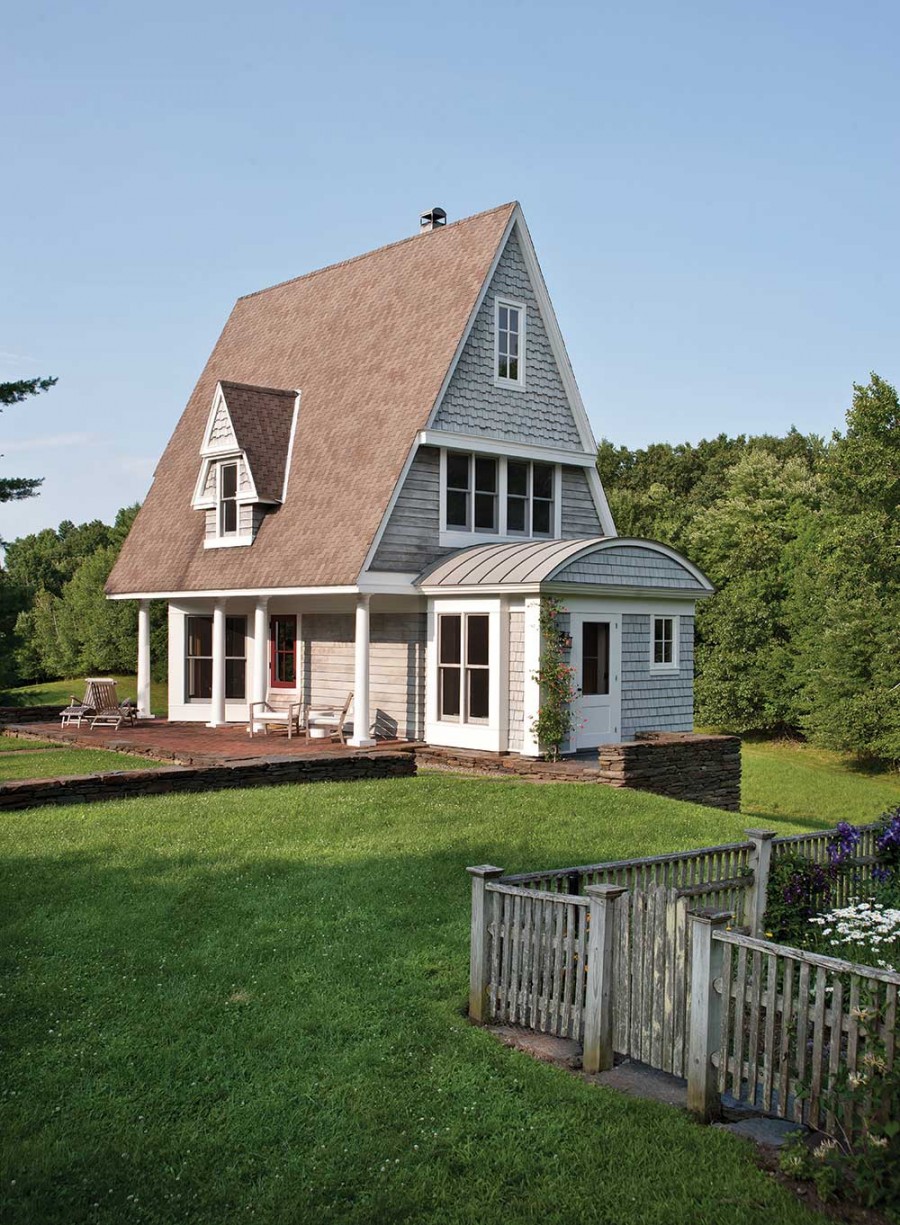 In addition to providing it with its unique character, the house’s high, steeply gabled roof keeps it cool in the summer by drawing chilled air from the ground level and funneling out hot air through a window in the cathedral ceiling. An energy-efficient, high-velocity central air-conditioning system keeps the house cool when humidity is high. In winter, a centralized fireplace and radiant heat keep everything toasty. For added economy, Wedlick designed the house so that the heat could be entirely shut off without risking frozen pipes whenever he was traveling. It’s all about economical use of energy.

It’s also about economical use of space. The house looks petite from the outside, but inside there are four sleeping areas: two master bedrooms, a guest bedroom, and a sleeping loft, comfortably sleeping eight. A turreted staircase leads to the two upper bedrooms and a guest loft (“Teen heaven!” Wedlick says). At the ground level is a master suite with a sitting area, bathroom, dressing room, and private terrace. “Our extended family can stay here without feeling like we’re on top of each other,” says Wedlick. “There’s a nook for reading and another nook for writing a letter and another nook for playing videos. That is what makes this small house act like a big one.” Custom cabinetry and built-ins are found in nearly every room of the 1450-square-foot house, maximizing storage space. With Douglas fir ceilings and wainscoting, Carrera marble counters, Waterworks-brand fixtures, European appliances, and bronze hardware located throughout, one could call it “luxury green.” 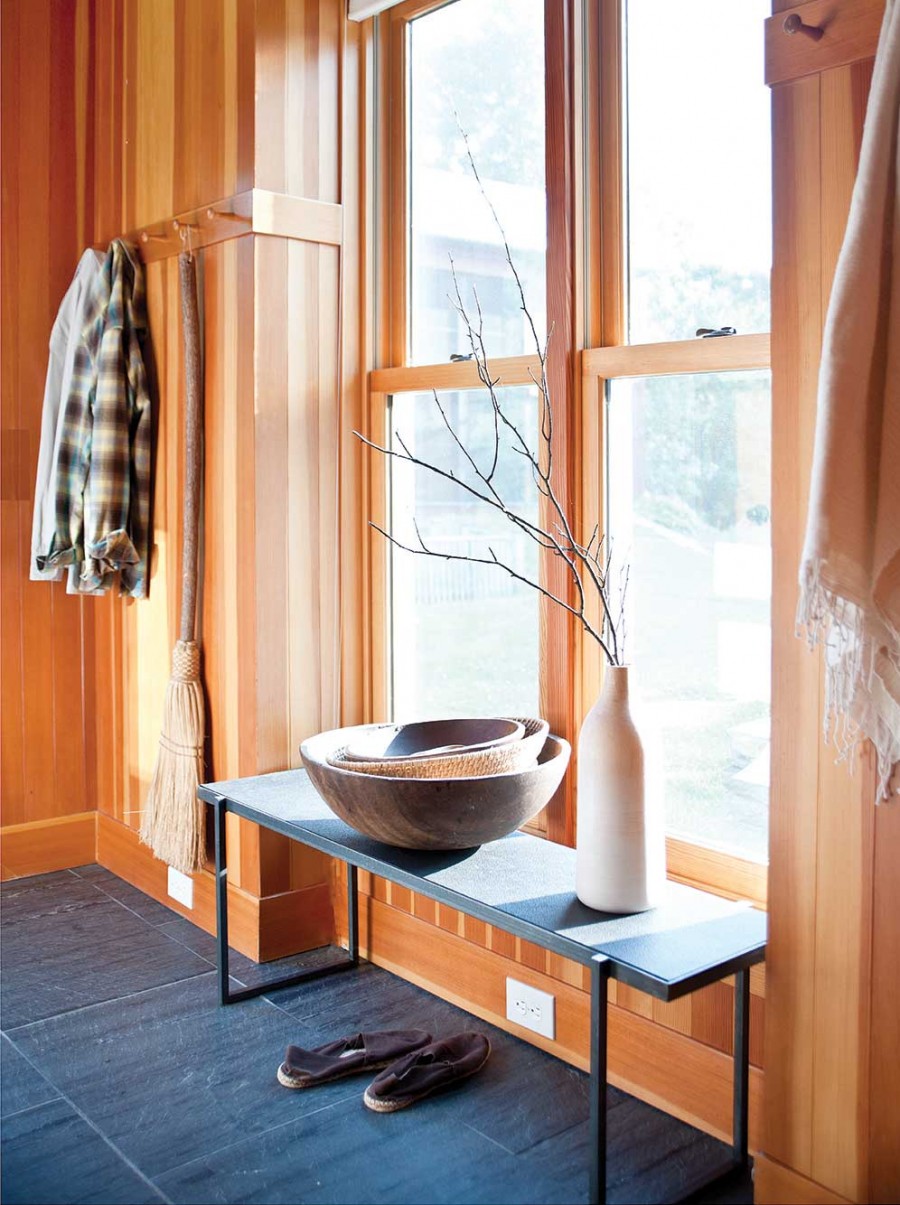 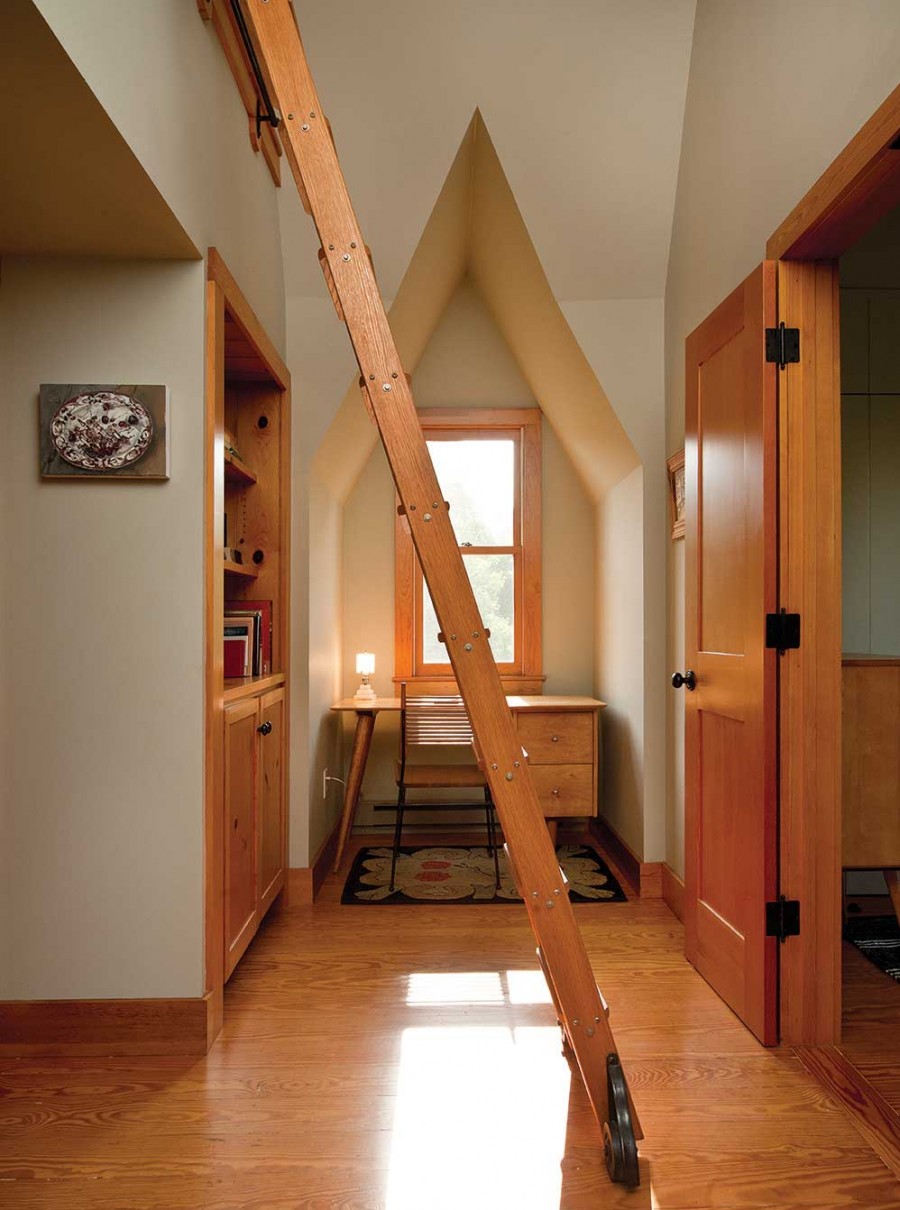 Wedlick added the adjacent 1600-square-foot barn as a studio and party space. With 22-foot ceilings, this solar-powered, three-season structure has its own fully equipped kitchen and a full bath with outdoor shower. “The solar panels allow it to be a zero-energy structure,” says Wedlick. The barn produces more energy than it needs, and the excess is either used by the main house or sold back to the power company. “The electric meter will literally spin backward at times,” he explains. With massive barn doors on all four sides, the “studio barn” serves as a giant screened-in porch and event space in summer. “We had a concert in the barn with seating for 100 people,” says Wedlick. “The acoustics were wonderful.”

Just over two hours from New York City and Boston, and outside the cultural and culinary capital of Hudson, the house is nestled in a secluded clearing surrounded by 11.5 wooded acres. The house and barn are set on a minimalist landscape co-designed by landscape designer Margie Ruddick that features stone walls, wildflower meadows, cutting flowers, herbs, and vegetables. Last year, the grounds were depicted on the cover of the New York Times Home section. 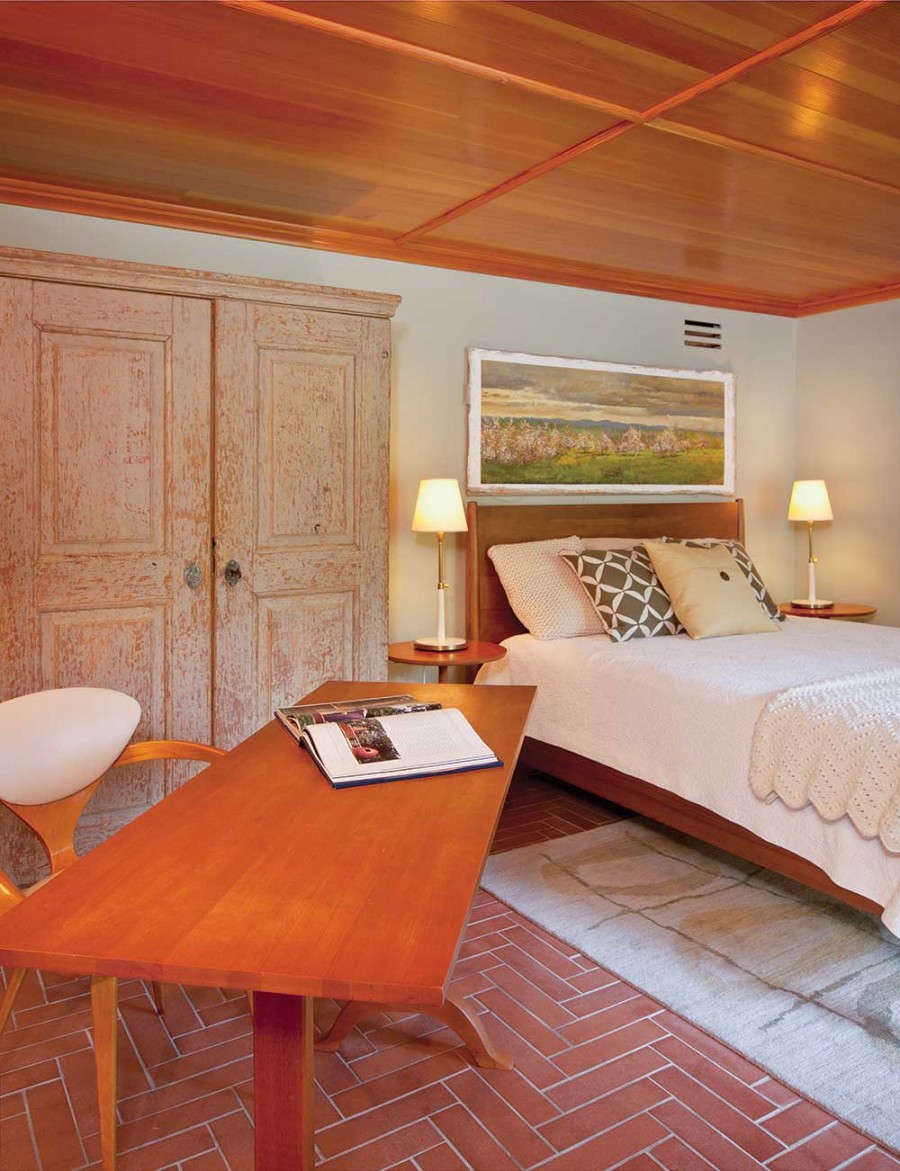 Wedlick built the house for himself and his partner Curt DeVito in 1992, added to it every year, and finished completely renovating the entire property a year ago. The house and barn have been featured in numerous books and magazines and won his firm of BarlisWedlick Architects (offices in Manhattan and Hudson) entry into the prestigious Smithsonian Cooper Hewitt Triennial National Design Award exhibition. It’s also the first design to encapsulate all the values of his four books on residential architecture, which promote regional character paired with a modern aesthetic, the smart use of limited space, and green architecture. “I believe I tested every green architecture idea I could on our property in Kinderhook,” says Wedlick.

Wedlick and DeVito may be moving on but they’re not going far. The pair are relocating to another of Wedlick’s passive solar homes, in nearby Stanfordville. That home’s previous owners are moving out of state, and Wedlick will design a new green home for them there.

“The Kinderhook house works really well for people who love to be close together and spend time with family and friends, with the knowledge that they’re having as little impact on the environment as possible,” says Wedlick. “Curt and I are really looking forward to making new friends with the next curators of this home and welcoming them into our extended family.”