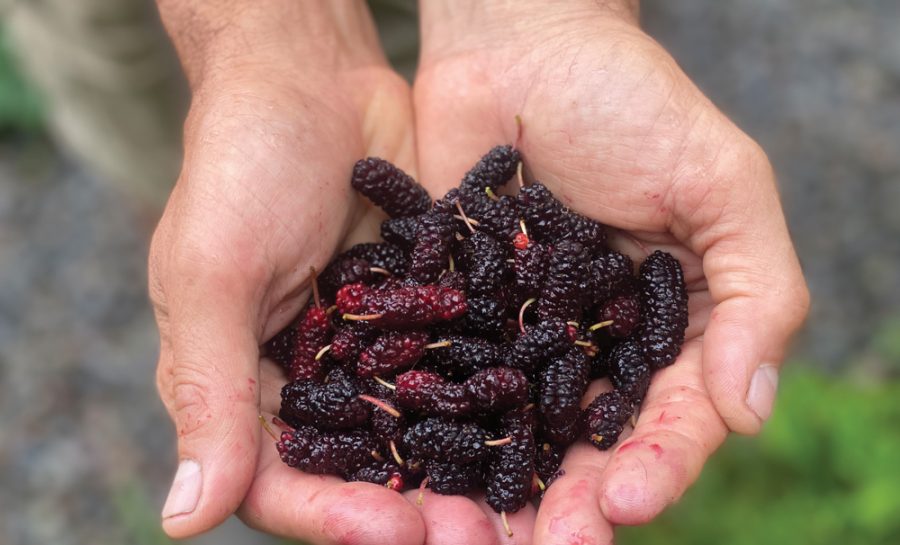 Allyson Levy started gardening so she would have a supply of seeds, leaves, and petals to incorporate into her encaustic artwork. Her husband, Scott Serrano, relied on wild black cherry and hickory trees to attract the silk moths he wanted to draw.

Now, more than 20 years later, their Stone Ridge garden is a nonprofit organization and has become their main form of art. Hortus Arboretum & Botanical Gardens contains many unusual, rare, and endangered plants, many of which are edible. It consists of 11 cultivated acres and an additional 10 acres behind the couple’s house that they bought last year and plan to start planting this fall.

“We became obsessed with the plant world and with diversity and species that might disappear,” says Serrano, noting that the couple will nurse as many as 200 plants indoors until they are strong enough or it is warm enough for them to go outside. “We are beyond full-time. That’s when there are plants all over your windowsill and your floor, and piles of seeds and packages on your dinner table.” 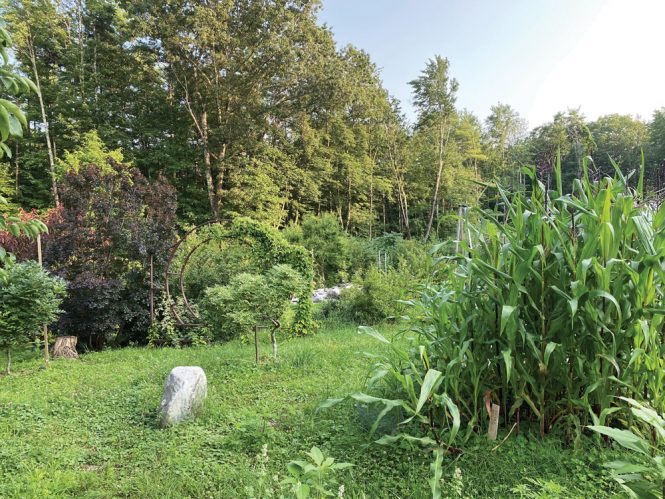 To help make their style of cultivation accessible to others, Levy and Serrano wrote Cold-Hardy Fruits and Nuts (Chelsea Green Publishing), which features 50 types of fruit and nut plants that can be grown in the Hudson Valley.

“The book was our give-back,” Levy says. “We wanted to show people some quick tips to grow things on their own.”

Most beginning gardeners select fruit trees that are available at local nurseries, like apple, peach, and cherry trees. “That’s a mistake, because nurseries have to be conservative or they’ll go out of business, and there’s a huge range of what’s edible in the world,” Serrano says. 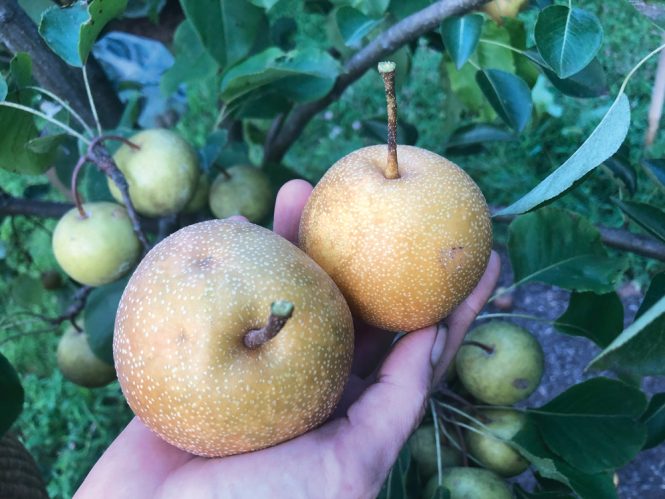 Common types of fruit trees also tend to get diseases and attract pests like Japanese beetles and aphids, while Serrano and Levy specifically cultivate plants that are “about 90 to 95 percent disease- and pest-free,” according to Levy. In addition, they focus on creating a diverse food supply that will help growers adapt to the effects of climate change.

“We loved that the book presented such a deep dive into perennial crops in the Northeast,” says Brianne Goodspeed, editorial director for Chelsea Green Publishing. “The amount and depth of information that Allyson and Scott offer about growing and propagation goes beyond the coverage you’d typically find in a home-gardening book.” 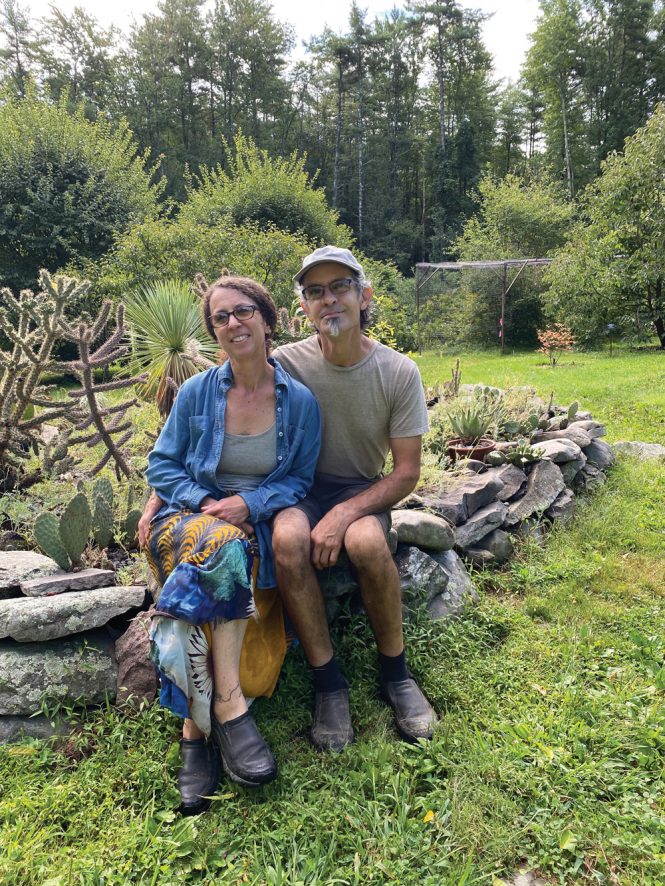 Each plant is accompanied by a short history, a “taste profile,” and a “growth difficulty rating” to prepare gardeners. “Some things in our area, like maypop, are going to take coddling and protection,” Serrano explains. “Black raspberry is easy. Maypop is frost-sensitive. We’d put that at three. Black raspberry is a one.”

Gardeners who invest the extra effort will find maypop has “a deliciously mild, tangy flavor,” according to the book, and the vines “are spectacularly beautiful. Any garden would be improved with a trellis of maypop flowers, even if you never got a single fruit!”

From San Francisco to Stone Ridge

The couple moved from San Francisco to Stone Ridge in 1999 and started gardening on the three acres that came with their circa 1840 house, originally a cooperage where barrels were made. They planted peach, apricot, and cherry trees on the property, which sported only a few daffodils and some boxwood and forsythia when they arrived. Those fruit trees have since been replaced with pawpaw, persimmon, medlar, and Cornelian cherry trees, which tend to remain disease- and pest-free. They preserved a large patch of low-bush blueberry and added a mulberry tree, a concord grapevine, seaberry bushes, and ornamental plants like purple and red salvia. Serrano later created the couple’s first hardy-cactus collection, including flowering specimens like prickly pear and claret cup, which are typically found in the Southwest. 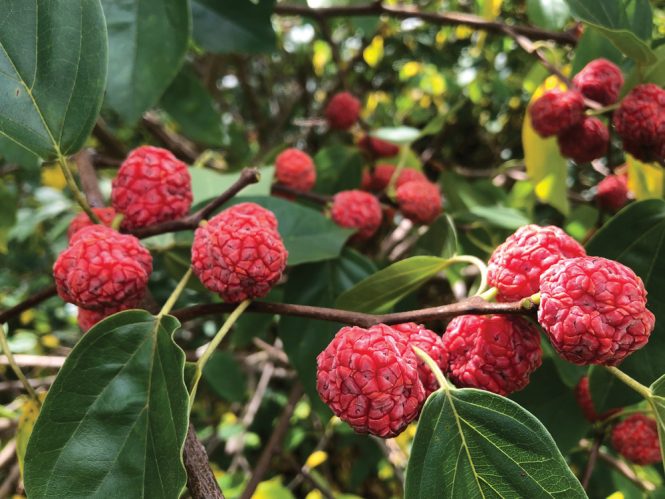 Che, also known as Mandarin melon berry, has a flavor that mixes qualities of mulberry and fig with watermelon and lychee.

“But it was a heavy lean toward food,” says Serrano, noting that the edible-versus-ornamental distinction is often meaningless because fruit trees produce beautiful blooms. “When we’ve grown something for many years, we can say with some confidence, ‘You should try growing this at your place.’ We’re testing things out and seeing if it’s worth all the effort; can it grow on its own without being coddled too much? All of these things are factors.”

He adds, “You have to screw up a lot to learn things.”

Diversity became the couple’s watchword. In 2004, they started sourcing plants from all over the world from mail-order companies “after we’d exhausted everything around us,” Levy says. Five years later, when they had filled their original three-acre plot, they bought eight acres across the road. A nut grove, an area dedicated to native plants, a collection of Chinese decorative and edible plants, and a Southwest desert wildflower and cactus bed now reside there, along with a greenhouse to shelter vulnerable plants during the winter. Meanwhile, they launched a landscaping business called Hortus Conclusus to support their gardening habit and had a cottage built on the plot that they use as an Airbnb. They also use the cottage to exhibit work by local artists who focus on nature and for artist and writer residencies. 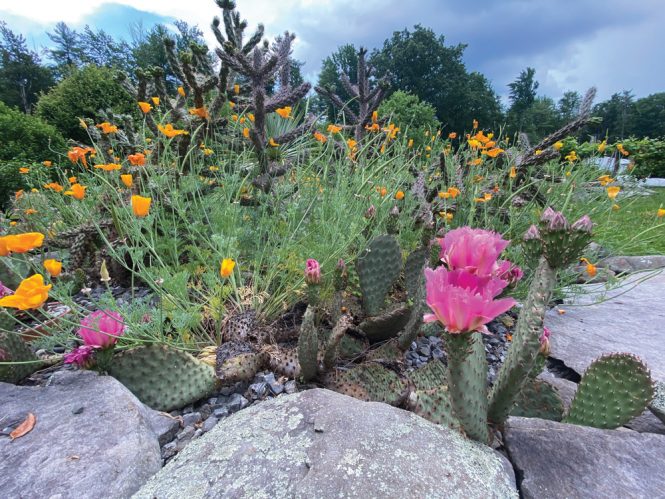 Eric Stewart learned about Hortus Arboretum through a garden design company he owned about a decade ago. Then an organizer for the Rondout Valley Business Association’s tours of area gardens, Stewart invited the couple to participate. Later, in 2017, the Garden Conservancy, a national nonprofit, also included Hortus Arboretum in its garden tours.

“Hortus Arboretum is a wonderful place to see and learn about gardening, native plants, trees, edibles, and exotic species from all around the world,” says Stewart, now an Ulster County legislator for District 18, which includes Stone Ridge. “It’s an amazing resource and a true hidden gem.” 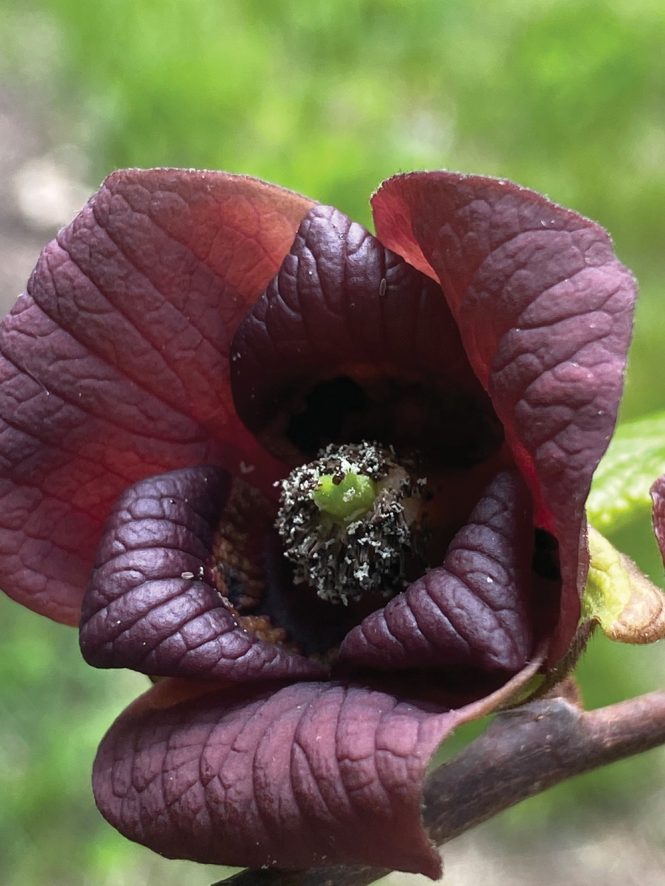 Unlike its tropical South American relatives, pawpaw trees will not bear fruit without a minimum of 400 hours of temperatures below freezing each year.

Levy and Serrano began to open Hortus Arboretum to the public outside the tours and also created gardens at the local elementary and middle school that their daughter, Zoe, now 27, and son, Emmett, 19, had attended. They taught a monthly class called Edible Landscaping through Wild Earth, a nature immersion program based in High Falls, and started selling plants to members of the community, which they now do through an e-newsletter (the sign-up link is posted on Hortusgardens.org).

In 2012, the garden was accredited by ArbNet, a nonprofit group that establishes standards of professional practice for tree-focused public gardens; in 2017, Hortus achieved a Level II accreditation, which requires a minimum of 100 species or varieties of trees or woody plants. As the garden grew, the couple hired part-time workers to help them with maintenance. 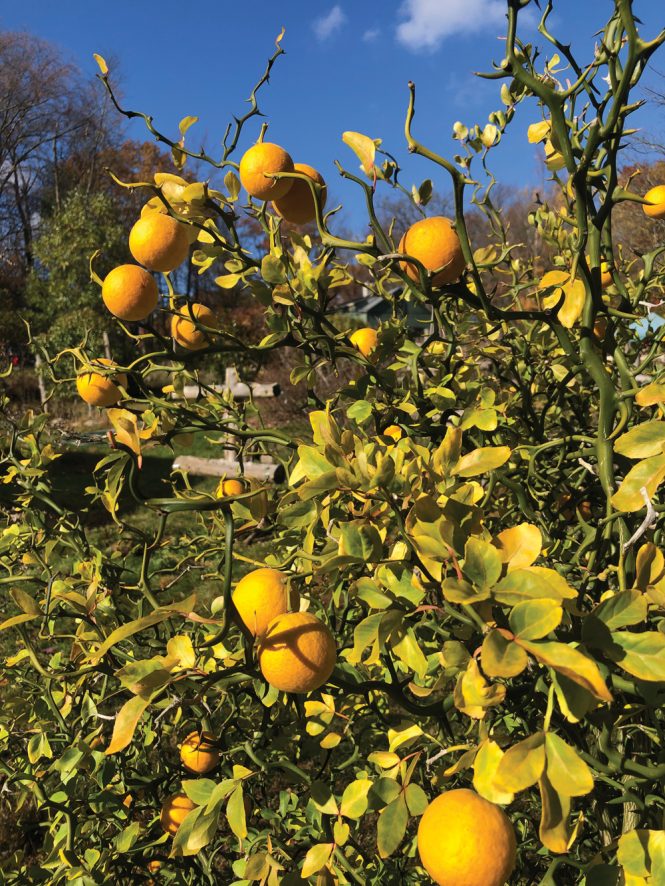 While Hardy orange is mostly skin and seeds, this native of Northern China ia an interesting landscaping addition.

Three years ago, Hortus Arboretum gained nonprofit status, making it eligible to apply for grants and receive donations. “Prior to us being a nonprofit, when Scott and I wanted any plants or any improvements or wanted to pay the people who worked for us, we just worked extra jobs putting in trees or other horticultural work for clients,” Levy says. Last year, the couple was awarded a $20,000 grant from the Stanley Smith Horticultural Trust for educational signage and is working on a second grant application to make their pathways more accessible.

Today, Hortus has about 10,000 plants, representing 4,000 species, and about a third are edible. It is open to the public on weekends from Mother’s Day through Halloween (hours vary and are posted on their website). Many of its visitors are locals, but there are also “random plant addicts who look us up and say, ‘Oh, there’s a little arboretum here’ and are quite surprised by what we have,” Serrano says. 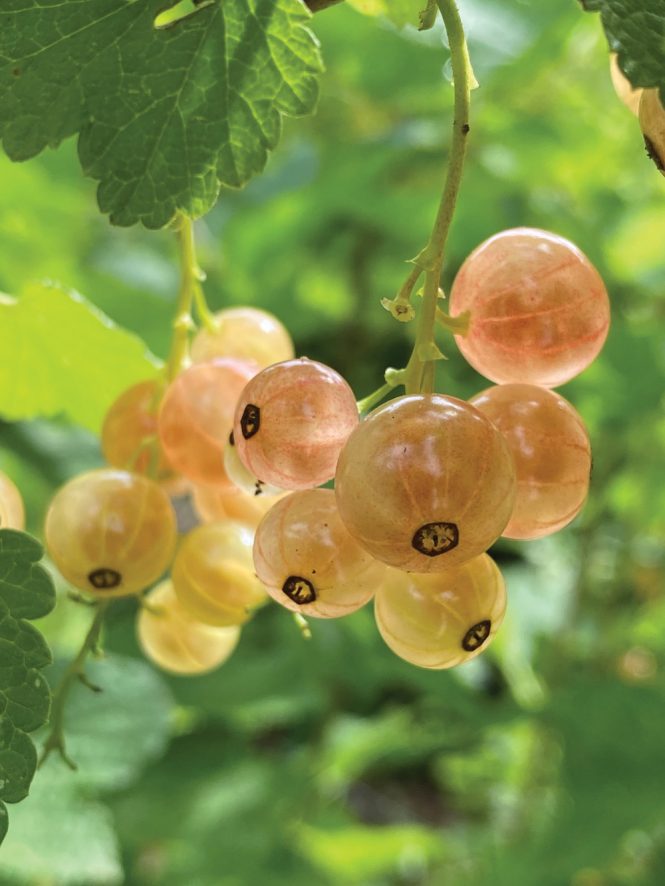 A Berry with a Mango Custard Taste

Some of the couple’s favorite edible fruits include American persimmon, whose taste they liken to butterscotch, and pawpaw, a berry with a mango custard flavor. “Another one in the book that’s really esoteric is mayapple,” Levy says. “It doesn’t have a big following because you can only eat the pulp, but it tastes like tropical passionfruit.”

Adds Serrano, “We also eat medlar, which is called horse’s anus. It looks like a horse’s butt from behind, but it tastes like cinnamon applesauce.” 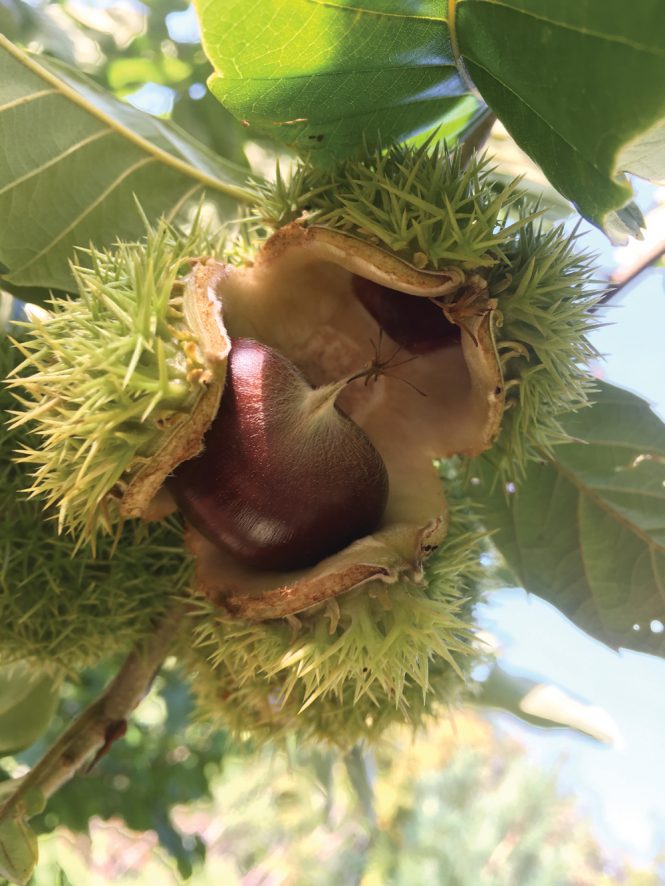 Chestnut in its husk

The couple is already at work on a second book that will focus on edible tropical houseplants that can be transitioned outside during the growing season. The book will include a section on spices. One of Levy’s favorites, spicebush, “produces a red berry that tastes like a combination of coriander, allspice, and black pepper,” she says.

In the past three years, they have doubled down on planting endangered species to help ensure their survival, sometimes by snatching seeds from other gardens. “When we think of leaving this place behind as a legacy, that’s what I think of,” Serrano says. “I want this place to be on the map knowing we have a large collection of endangered species from all over the world.”