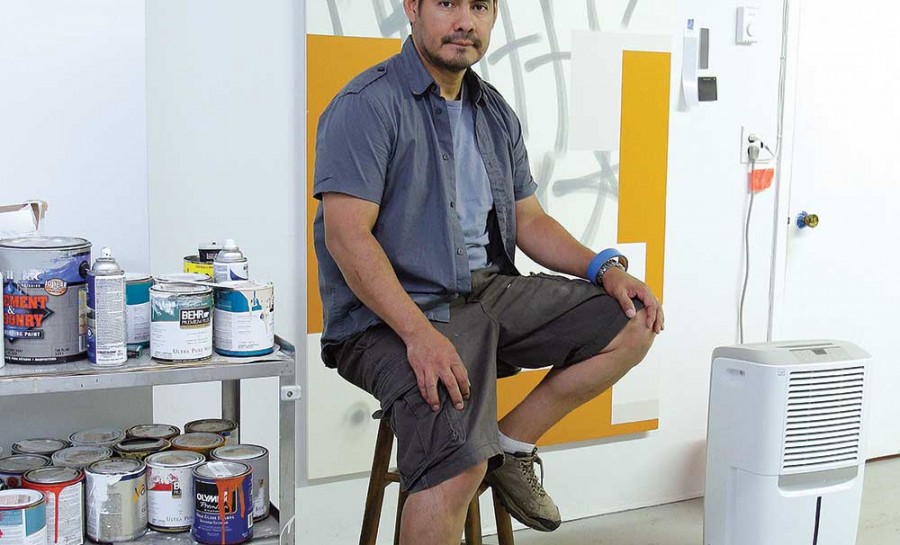 When Eleanor White and Karlos Carcamo decided to trade apartment life in Beacon for a single-family home with enough land for dogs and a vegetable garden, they expected to buy something fairly conventional and jazz it up. Both White and Carcamo are artists, and White, who grew up around the antiques business in Arizona, had started collecting mid-century modern furniture at an early age. As first-time homebuyers, they were really open-minded but needed their budget to stay under $300,000. Other requirements: near the Metro-North train, as both commute weekdays to Manhattan; and ideally, they wanted enough space for two studios without sacrificing a guest bedroom.

“Our real estate agent found this place, it was totally her idea,” says White. “We weren’t looking for something unusual, and when we first saw it we weren’t so sure. It was the question of ‘Is this really ugly or is it really cool?’” They did like the location, however: a quiet street in a conventional, middleclass Wappingers Falls subdivision, the part nearest Fishkill and Beacon. 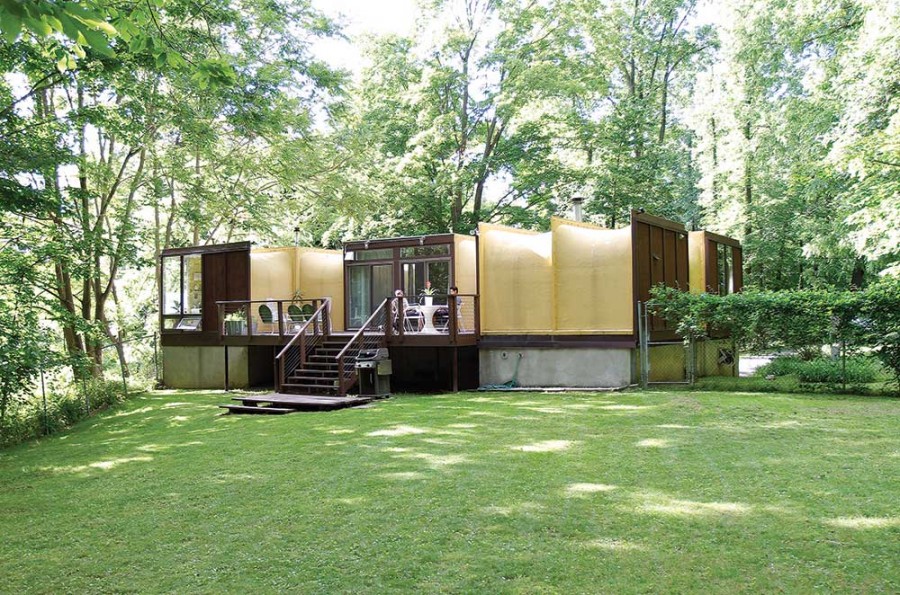 The exotic design grew on them quickly. Soon, they were renting the house and figuring out how to buy it, which they finally did in 2009 with financial help from White’s parents. The couple declines to say what they ultimately paid for the two-and-a-half-bedroom, two-and-a-half-bath house on one and one-third acres. Located less than 10 minutes from I-84’s exit 11, the house features about 1,200 square feet of fully finished interior, plus an enclosed garage, laundry area, and almost 800 square feet of ground-floor studio space divided into “his” and “her” rooms.

The White-Carcamo home is a 1974 fiberglass, modular prototype designed by architect Eugene Comilloni, for himself, at the beginning of his career. He tried to market the “new concept in residential construction” commercially, apparently without success. Little is known about Comilloni; in fact, Carcamo would appreciate any information anyone reading this article may have about him and the home’s construction. What’s most unique about the house is that it’s comprised of a series of color-impregnated, pebble-grain, gracefully arched, L-shaped fiberglass segments built off premises. The inner and outer walls of fiberglass sandwich two inches of polyurethane insulation. The interior wood walls clamp together and can be reconfigured at will. The fiberglass must be maintained annually with sealant and the occasional patch; the man who takes care of it for White and Carcamo is a boat-repair specialist. In sum, it’s a radical departure from conventional stick-built construction, and it looks simultaneously futuristic and retro. 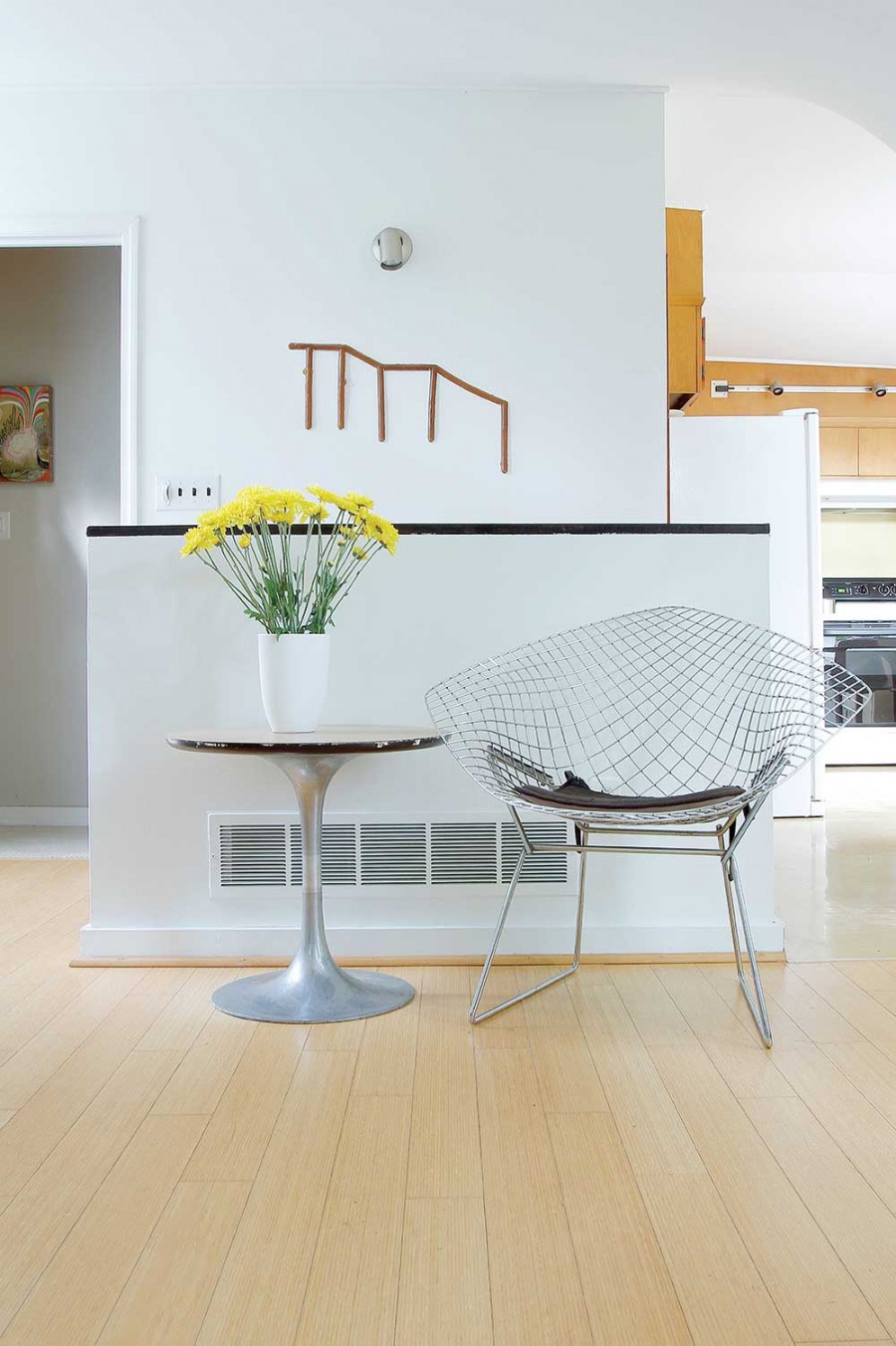 “The economy in the mid to late ’70s wasn’t so good around here,” says Carcamo. “Comilloni was probably young and interested in experimental modular home design, so he tried. But, obviously, this style concept did not become dominant. In fact, our home is the only unusual structure in our neighborhood.” Carcamo says Comilloni sold the home for about $65,000 in 1978 to an IBM programmer who worked out of the company’s Fishkill facility and lived in it until 2005, leaving it essentially unchanged.

White and Carcamo met through work in 2004 and married a few years ago. They share their home with three dogs and do not have children. “I grew up a hippie child in Tucson, and now I work as an art handler at the Metropolitan Museum of Art,” says White. “But never did I imagine I would marry a former professional break dancer and live in a house that looks like an upside-down fiberglass boat.” “I moved to Jamaica Queens from El Salvador at age five,” says Carcamo, who really was a professional break dancer (he performed with the legendary “Queen of Funk-Soul,” Chaka Khan, when he was 14) and now works full time as a master picture framer for the Museum of Modern Art. “My Dad worked two jobs, and it’s a really big deal in my family that I decided to be an artist—my parents were worried I’d starve. But Eleanor and I are making it all happen, although we both put fixing up the house ahead of our personal art careers for a few years. We really found our dream home, and basically never intend to sell it.” 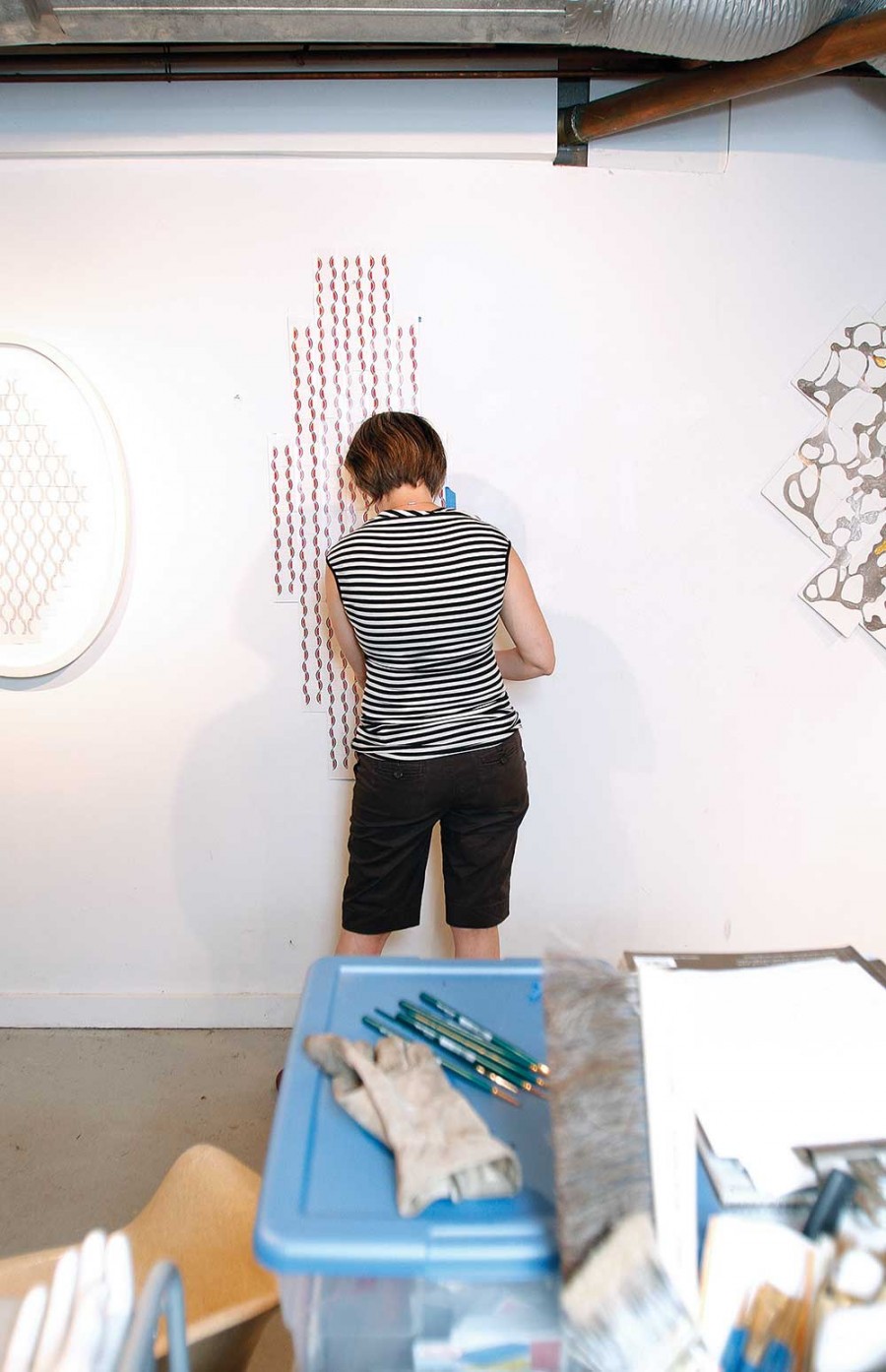 Living Inside a Work of Art

“It’s a little like living in a big covered wagon,” says White, who makes intricate collages out of cut-up playing cards. “You can’t just drive nails into the exterior walls to hang art; the fiberglass shell can’t handle that.” Carcamo paints and makes sculptures out of microphones. Their art, plus pieces from friends, are displayed throughout the house.

The appeal of the house deepens with familiarity. There are literally hundreds of endearing details—swanky curves are everywhere—testimony to the fact that an architect designed it for himself. But it’s also really livable, not an uncomfortable intellectual conceit. The front deck is made of redwood. All of the glass is thermopane. The bedrooms all have full closets with bifold doors. The kitchen cabinets are custom made of natural birch. To save space and presumably also money, the staircase is a prefabricated, standard metal spiral. Inside it’s cozy, like a boat.

The house is on a circular street and has a feeling of generous acreage plus privacy, with the convenience and sociability of a neighborhood. There’s a large back deck off the living room that overlooks a spacious fenced yard abutting the Stony Kill Farm Environmental Education Center, a SUNY- and DEC-affiliated teaching farm that will never be commercially developed. “We adore Beacon, but the lots are really small,” says White. “I’m going to double the size of my vegetable garden this year.” 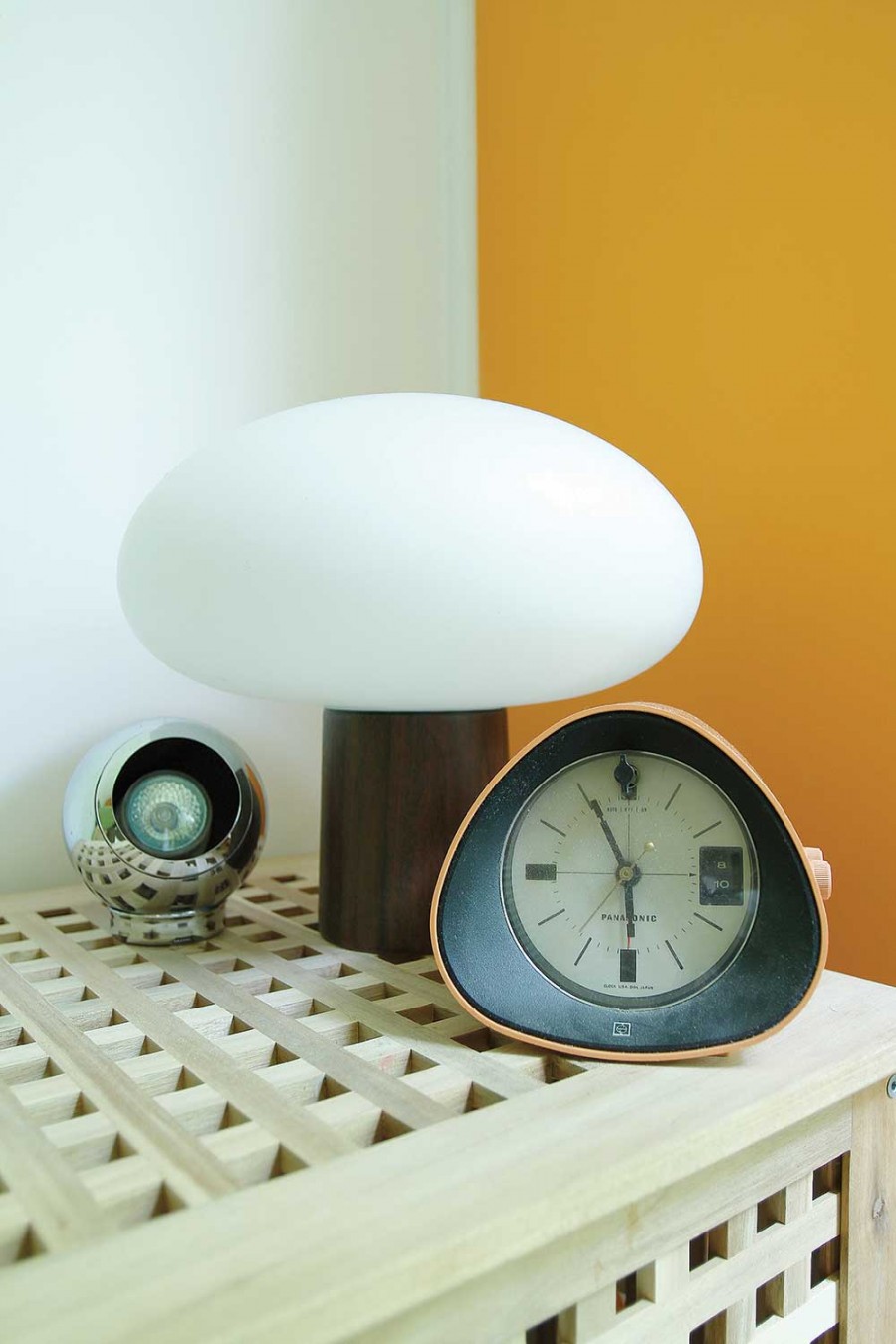 After they bought the house, White and Carcamo first methodically updated the systems. In the living room, they installed bamboo flooring. This winter, they added a $4,000 pellet stove to supplement the conventional forced-air heating system. White expects it will cut their heating oil bill by one-third. Installing the pellet stove required some “MacGyver”-like venting, but a woodstove would have entailed cutting a huge hole in the fiberglass. The dark corner of the living room the pellet stove now occupies also “just never worked” for some reason as a spot for their prized “egg chair,” which is presently located in the guest bedroom.

White says she’s deeply satisfied with the way her midcentury modern furniture works throughout the house. But this seamless sense of unity and perfect maintenance frankly took a lot of work. While the house has a casual vibe, in reality every inch of space has been highly considered. The couple just hasn’t been able to completely transform all of it yet. “Parts of the house had not been updated at all since 1974,” she says. “There was a lot of orange shag carpet. To save money, we did almost everything ourselves, sheetrocking walls, fixing leaks, ripping out rot. This house has a number of design quirks; it’s never going to need a new roof, but it doesn’t have gutters, for example.” To date, the couple hasn’t done much to the galley-like kitchen, or the standard ’70s-issue color-coordinated tile bathrooms. “It was an extreme learning curve,” says Carcamo, a picture-framer who is  known in Beacon for the gallery (now closed) Go North, and as cofounder of Windows on Main Street, an annual public art event that pairs artists with local businesses. “We put all our energies into working at our jobs and on the house—we didn’t produce any art.” 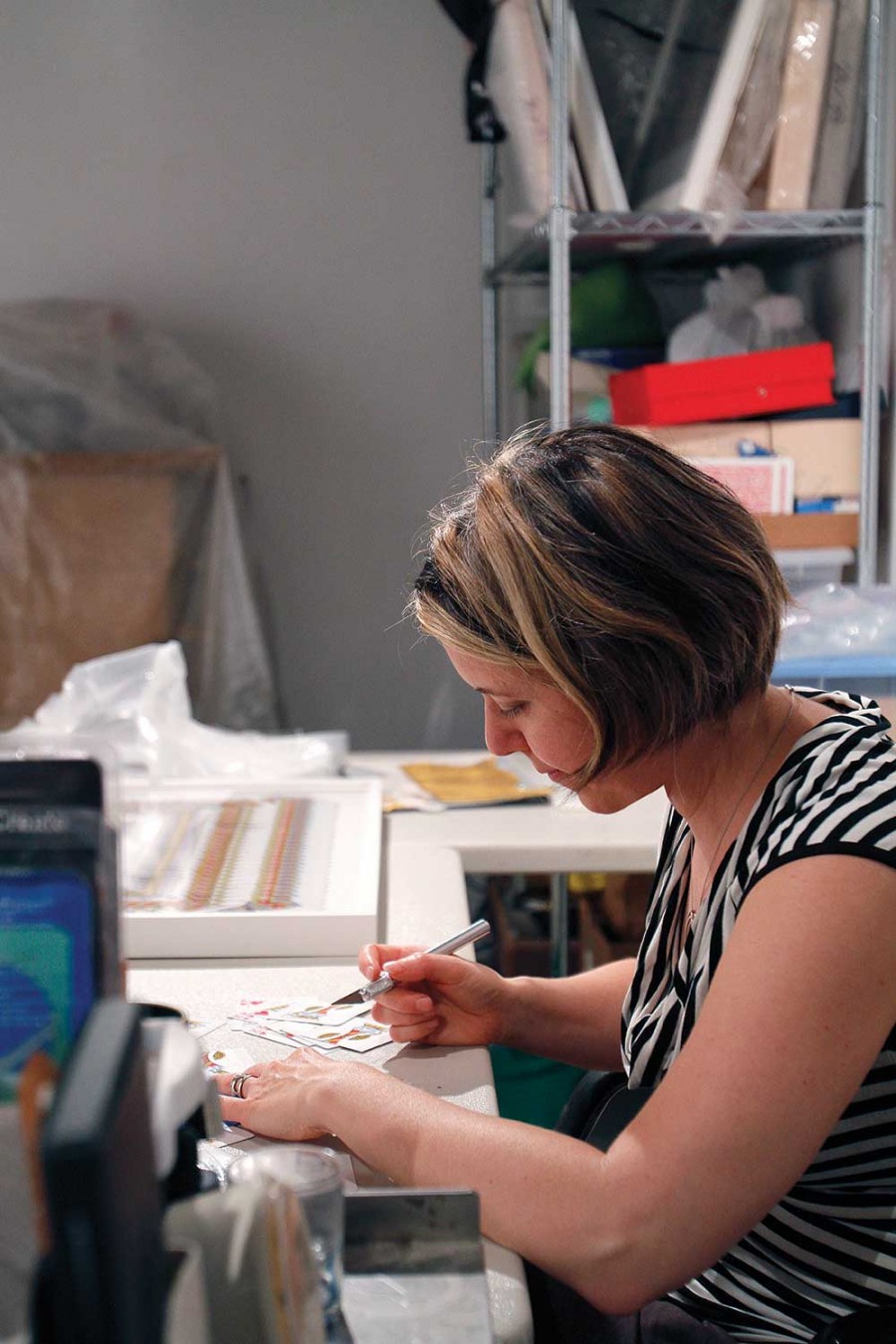 Lately, though, they both have been busy making art. Springtime also means it’s time to spruce up the landscape, get the organic vegetables started, and power wash the house exterior. For reasons of safety and light, Carcamo took down quite a few trees that were growing close to the house. There was also a broken landscaping drain in the front yard that required a big excavation to repair. It was fixed just before Superstorm Sandy.

“I did not enjoy the storm—we had some flooding,” says White. “But as a rule we really love the sound of rain on the fiberglass; it’s kind of loud. I grew up in big, old houses, so I appreciate the modernity of this place. I never want to leave.” 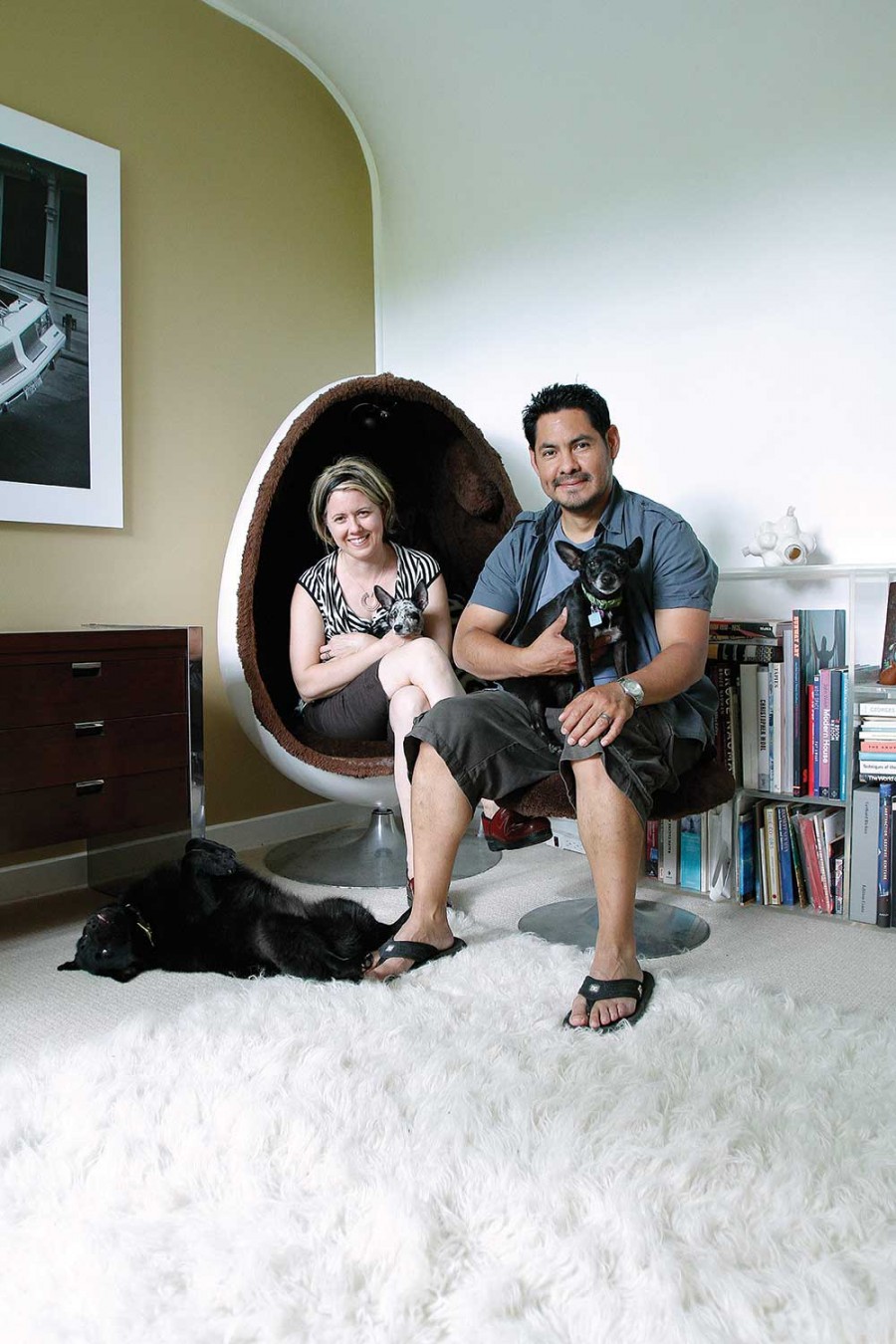