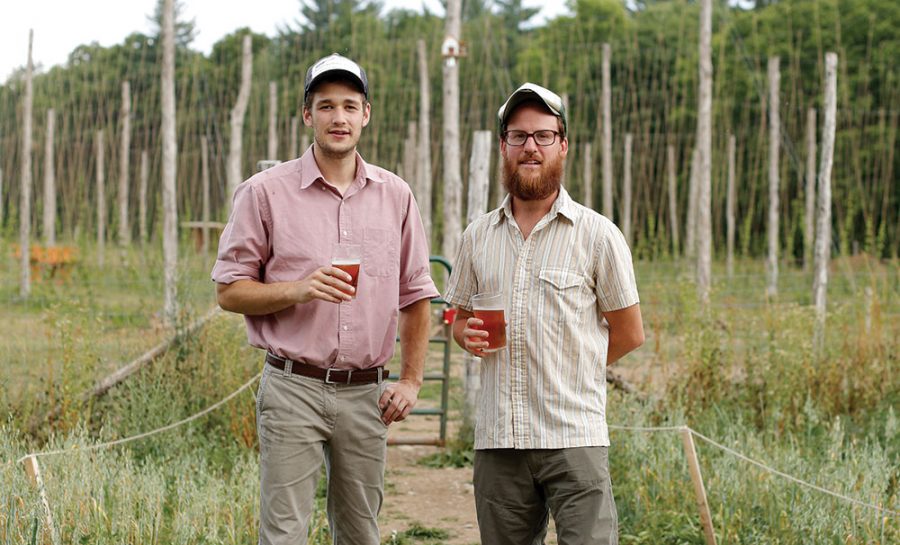 Jacob Meglio knows it sounds a little out there, but he swears the beer he makes as head brewer at Arrowood Farms Brewery in Accord tastes better in the hopyard.

And once you’ve had a pint of beer from Arrowood Farms on the farm itself, in the shadow of the hop vines (which grow on eye-catching 20-foot-tall trellises), amidst the sights and surprising sounds of the Norman-Rockwell-as-a-beer-enthusiast setting, you tend to agree.

The farmhouse brewery, which opened in July, is an organic farm where local ingredients and sustainability are not just marketing buzzwords but a way of life.

“We wanted to brew beers that captured the flavor of this region,” says Blake Arrowood, who conceived of the farm brewery and handles the agricultural side of the operation. To accomplish that goal, Meglio is focused on brewing approachable beers that highlight local ingredients.

Behind a homestead-style taproom, a one-acre hop yard stretches out. There are 10 acres of rye currently under production on the 48-acre farm. Inside the hopyard are tables where guests can sit and enjoy their beer and play popular brewery games like cornhole. The farm is also home to a Noah’s ark assortment of animals, each playing a role in the sustainable circle of brewing life on the farm. More than 100 heritage breed ducks regularly wander through the hopyard, sometimes interacting with guests and quacking frequently, not in the grating Aflac Duck way, but in a peaceful bird-chirping manner. The ducks produce waste that is rich in nitrogen, which helps fertilize the hop fields. Then there are sheep that provide natural weed and pest control, and pigs that consume the spent grain from the brewing process, ultimately providing farm fresh meat and ensuring nothing goes to waste. There are also bees, which pollinate the farm’s flowers and produce honey that will eventually be used in some beers.

Some of these animal products can be found in the taproom’s limited but flavorful food options, including a wonderful deviled duck egg. 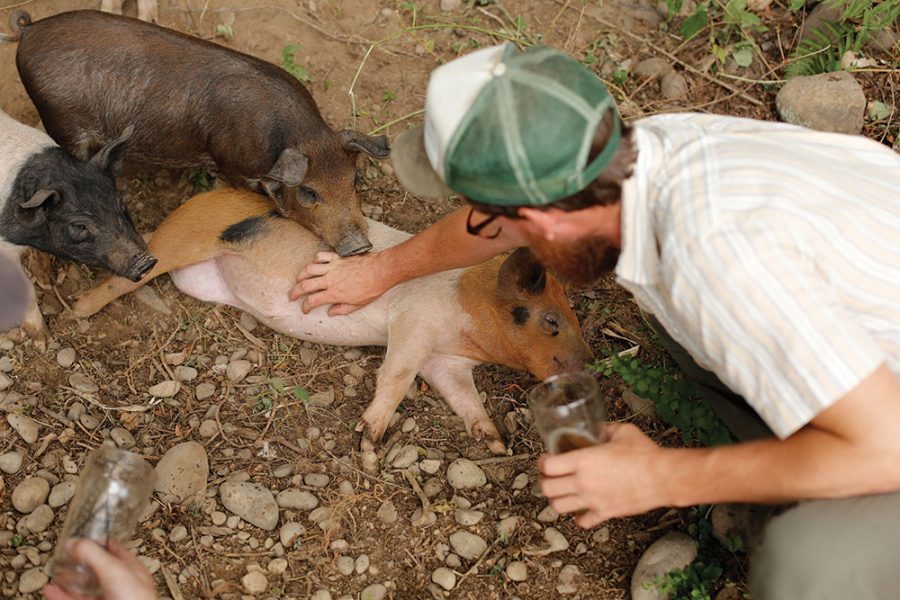 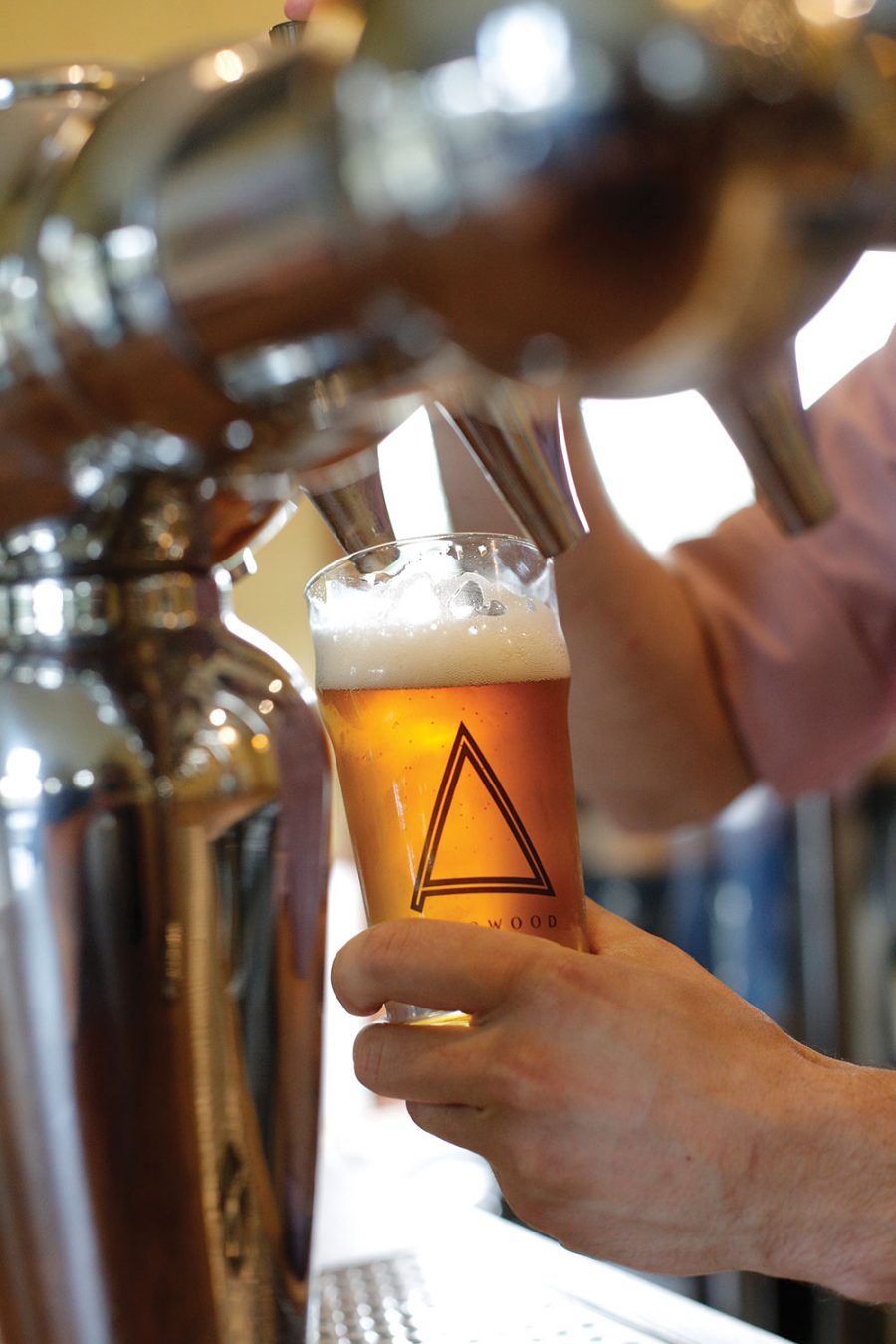 Prior to Prohibition, a majority of the country’s hops were grown in the New York region. But Prohibition, with the help of a mildew disease that was attacking many East Coast hop crops, put an end to commercial hop farming in the region. After Prohibition, hop farming moved to the Pacific Northwest, where the vast majority of US hops are still grown.

Of late, however, more hopyards have returned to New York, thanks to the increasingly popular craft beer movement and 2013 legislation that allows farm breweries in New York to obtain a farm brewery license and operate in a similar fashion to the state’s farm wineries.

“When New York State passed the farm brewing legislation we just took it pretty literally,” Arrowood jokes. However, the seeds of the farm brewer’s inspiration were planted much earlier.

A native of North Carolina, Arrowood moved after college to Southeast Asia, where he taught English and found inspiration in small agricultural communities “brought together by their land, their food, and their drink.”

After his travels overseas, he was drawn to New York City. “Having grown up in Small Town USA, I always knew I had to try New York, and Brooklyn was the obvious choice,” he recalls. Though he enjoyed living in the city’s hippest borough, he found himself drawn more and more to the land. “I think Brooklyn actually brought out my inner plant nerd and farmer,” says Arrowood. “I wanted what I couldn’t find in the city—the woods and a garden. That’s when my eyes turned upstate. Having close friends from the area, and visiting a few times, it was intriguing enough to make me pack my bags and move, again.” 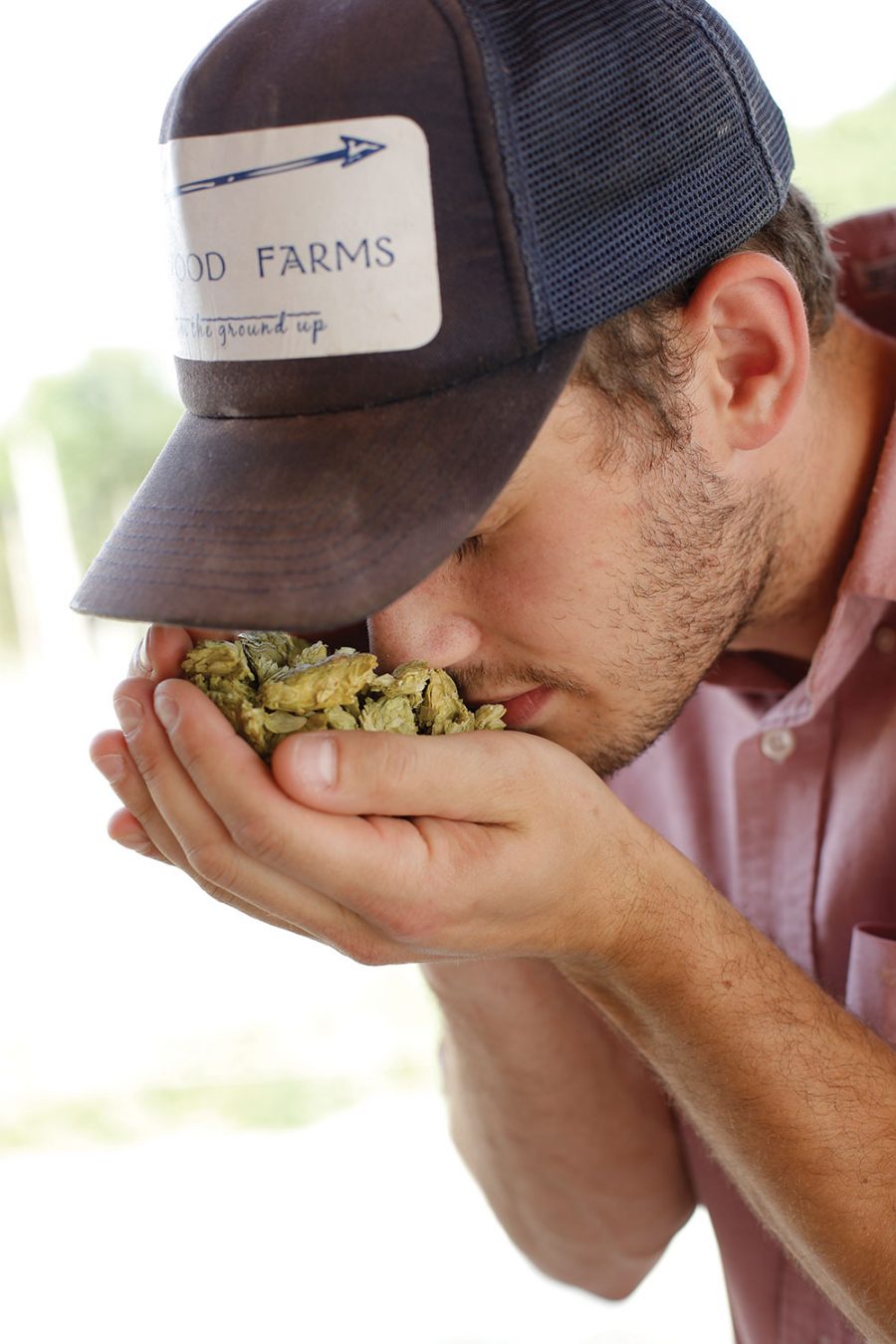 An internship at the Hudson Valley Seed Library was a “gateway to a community of like-minded people, lots of young people and older people alike,” Arrowood recalls. “It’s this intergenerational place where there’s a lot of sharing and creating. I found here what I had found in those villages overseas—it truly felt special. I was sold from the first day.”

Arrowood settled in Ulster County, and after partnering with like-minded people, secured farmland, beginning the three-year process of getting the farm brewery up and running. About a year and a half into the project, Meglio came on board as head brewer and a full business partner. Meglio, a Hudson Valley native, had begun experimenting with home brewing while studying premed at City College of New York, and quickly became obsessed with the craft. At Arrowood, he experiments with many local ingredients, and both he and Arrowood live near the farm and brewery.

Cascade hops are one of six hop varieties planted on the farm. They are a popular style of hops found in many beers, but the New York terroir creates a cascade hop that is distinct from its West Coast cousins. “Our cascade here is a little more piney and a little less citrusy,” Meglio says.

Those differences can be tasted in the brewery’s easy-drinking IPA, which has a rustic quality that is hop forward but lacks the bitter aftertaste of many IPAs. Another standout beer is the Stout Pig, a flavorful stout that will appeal to Guinness lovers. Of course, as good as these beers taste in the taproom, when you carry them outside to the farm they become a part of the menagerie of nature, and, like Meglio says, as crazy as it sounds, they taste just a little bit better.

The taproom at Arrowood Farms is open Fridays from 5-9, Saturday, noon to 8pm, and Sunday, noon to 6pm. ArrowoodFarms.com