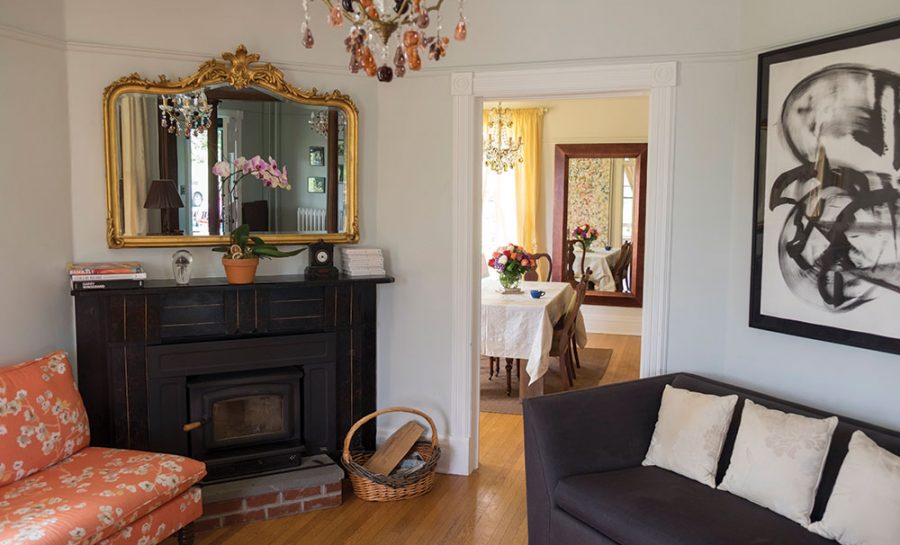 If you’ve ever stayed at an apartment in Paris, chances are you’ve been tempted to continue to live la belle vie—the beautiful life—long after you’ve returned home. But outfitting your own home with well-appointed rooms, a personalized entrance, and a kitchen and dining room befitting a gourmand can feel like a dream—an impossible dream, at that.

Thanks to author Danielle Postel-Vinay’s latest book, Home Sweet Maison, you can Frenchify your own home, wherever you live, without having to shell out big bucks. A self-professed Francophile, Postel-Vinay initially became interested in French culture as a teenager in Wisconsin after becoming acquainted with a sophisticated French expatriate named Jacqueline who became her mentor. She was so smitten with French culture that she eventually moved to the South of France, where she met her husband, filmmaker Hadrien Royo, whose family hails from Paris.

When Postel-Vinay—a novelist, memoirist, and podcaster who typically publishes under her maiden name, Trussoni—and Royo moved to the US, they initially lived with their daughter in Brooklyn for three years before settling in Newburgh in 2017, drawn by the stately homes on Grand Street as well as the area’s burgeoning Francophone community. 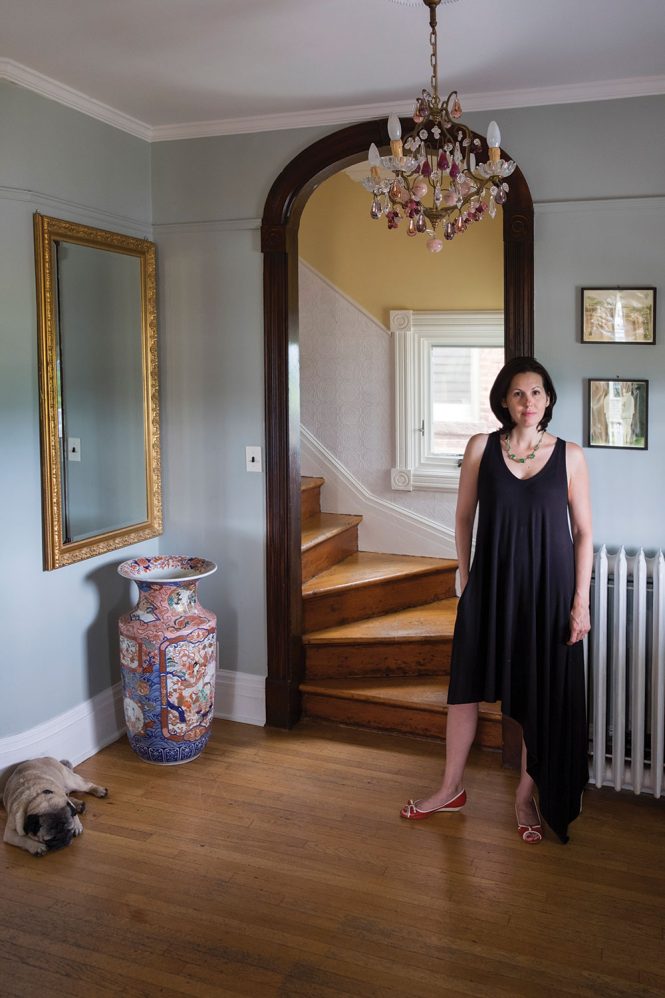 Danielle Postel-Vinay (and the family dog) in her carefully curated, French-style entryway, which features a colorful and idiosyncratic handmade chandelier.

The Hudson Valley Francophone Connection meets on the first Sunday of every month at the Newburgh Free Library. Discussion topics have included ways to make local homes feel uniquely French. The group was founded five years ago by Angela Paul-Gaito and Delphine Gueren, two French natives living in Newburgh who wanted to ensure that their children experienced the French lifestyle and got to interact with other French families.

“There are many elements you can bring to the US to reflect French life,” says Postel-Vinay. “For example, going to the market for fresh goods is a big part of French life, and you can visit plenty of farmers’ markets in Newburgh [and throughout the Hudson Valley] to get fresh, local, and organic food.”

Americans have long been fascinated with French culture, notes Postel-Vinay, and because of this, it’s not surprising that many want to add a French twist to their homes. “For centuries, France has been an inspiration to Americans,” she says. “Ever since the French Revolution, we have been joined by similar ideas about how to live. Often, Americans consider the French to be elegant and leaders in style and fashion. And so it is only natural that many Americans want to emulate French homes.”

Every Room Has Its Place

According to Postel-Vinay, the French are more traditional and ritual-loving than Americans, with each room being used for a particular function, as opposed to the popular modern open-floor-plan style of living.

Take, for instance, the functions of the rooms themselves. The French use the kitchen and dining room exclusively for cooking and eating, respectively, while the living room is strictly for gathering and socializing.

“The French are more about rituals than walls,” says Postel-Vinay, “and we have stuck with rituals [since moving to Newburgh]. The dining room is for dinner; we don’t watch TV and eat there. We try to have family dinners every night. In France, dinner is the time when families sit down and reconnect at the end of the day, and we keep that ritual here in the Hudson River Valley.” 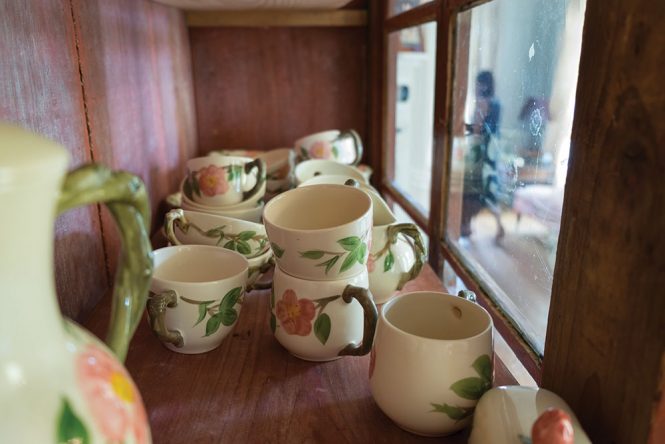 Charming displays of everyday items like handpainted teacups and coffee cups are common in French houses.

Postel-Vinay’s TV is kept in a cabinet in the master bedroom, although this is not a longstanding French custom. In France, the bedroom, or la chambre, is used solely for sleeping, and as such, typically does not include a TV or any extra furniture such as couches or bookcases.

Traditionally, those items were located in the boudoir, a lounge area located outside or near the bedroom, though boudoirs are no longer as common in French homes.

Although modern French homes tend to have wider, open spaces, allowing inhabitants to feel free to combine spaces, it remains imperative to keep some rooms distinct and separate, especially the dining room and the kitchen.

But if a home is small, certain rooms may be combined into one. For example, a home office may be incorporated into another room. Postel-Vinay says her mentor, Jacqueline, kept her desk in her dining room.

The French love being systematic and organized, yet they still maintain a sense of creativity and fun in the process—which is essential in Frenchifying your home.

This commitment to organization is best demonstrated in the French kitchen, or la cuisine, through the practice of mise en place—meaning “to put in place”—during the preparation of each meal. Basically, each cooking utensil—for example, a knife to chop onions—must be washed and put back where it belongs immediately after use. Leaving a mess of dirty utensils and bowls scattered over the countertop for cleaning up after dinner is simply not for the French.

Making an inventory of what is needed in the kitchen is also important. A French homeowner will survey the kitchen’s contents, determine which utensils and gadgets are used most often, create an order for how these tools are used, and then make labels to categorize each item. Although that might sound complicated, it’s second nature to Postel-Vinay. 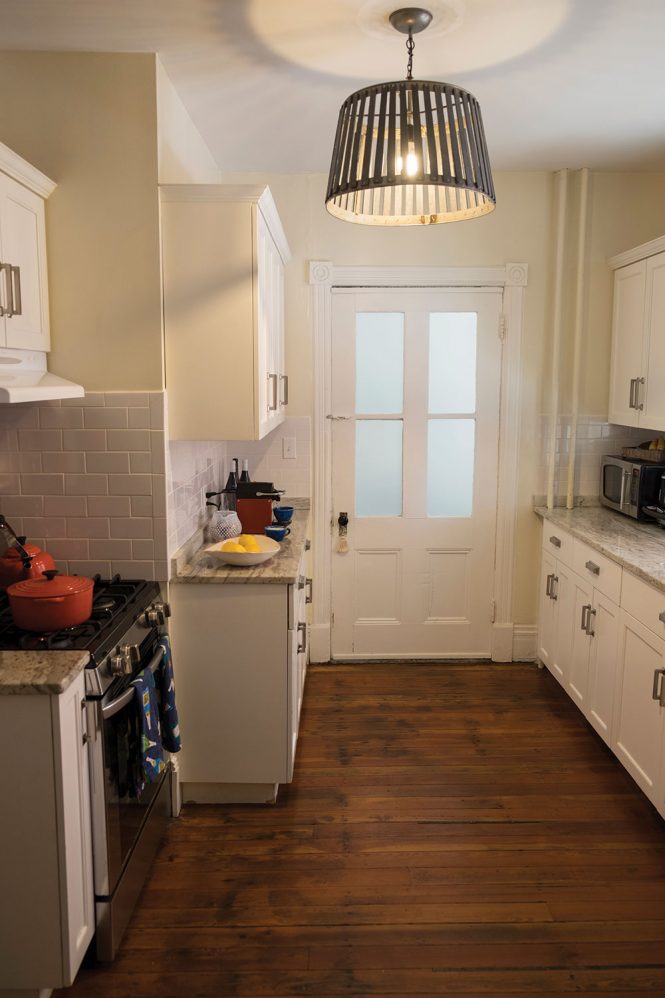 Postel-Vinay’s kitchen may be small, but it is well organized and highly functional.

“It’s something I try to do all the time—I try to have all the tools I need and keep things very streamlined in the kitchen,” she says. “I found, when I lived in France, that the French kitchen is the most functional and high-tech room in the house, where technology is more important than decoration. I love this, because cooking becomes the primary activity and purpose of the room—as it should be.”

Storing leftover food is imperative in French culture, as the French do not like to waste anything, and they like to eat smaller portions, yet French refrigerators, or frigos, tend to be diminutive in comparison to large American fridges. She is now a complete convert to the frigo.

“The French tend to buy small amounts of fresh food daily at outdoor markets and consume it the same day, so there is little need for a huge refrigerator,” she says.

But good organization extends well beyond the kitchen.

It is also advisable to organize all of your personal documents in a home archive, or les archives. Postel-Vinay recalls in her book that she first noticed this space—which can be a separate room, or a designated portion of one—while visiting a friend’s house in the South of France. For her Newburgh home, she’s created an archive of her own, using 10 oversized binders, a few boxes of clear dividers, and a Sharpie to divvy up the family’s tax documents and such personal documents as birth certificates, passports, and marriage license, along with her daughter’s immunization records.

But while the entryway is required, or de rigueur, in French homes, many American homes lack one altogether, especially apartments like Postel-Vinay’s former home in Brooklyn. To remedy that, she and her husband created an entrée by dividing the entrance area from the living room with a coatrack, placing a shelf of shoes next to it and putting up framed personal photographs near the door.

Carefully curated bibelots (tchotchkes) and books that hold special meaning or express a homeowner’s interests can also give an entrée personality. “The entrance is a reflection of who you are,” Postel-Vinay writes. “Choose objects that tell the story of your inner life.”

For instance, she advises, don’t hang a painting of flowers if you don’t like to garden. But do hang that painting if it reminds you of a loved one, whether it’s your grandmother or a past paramour. 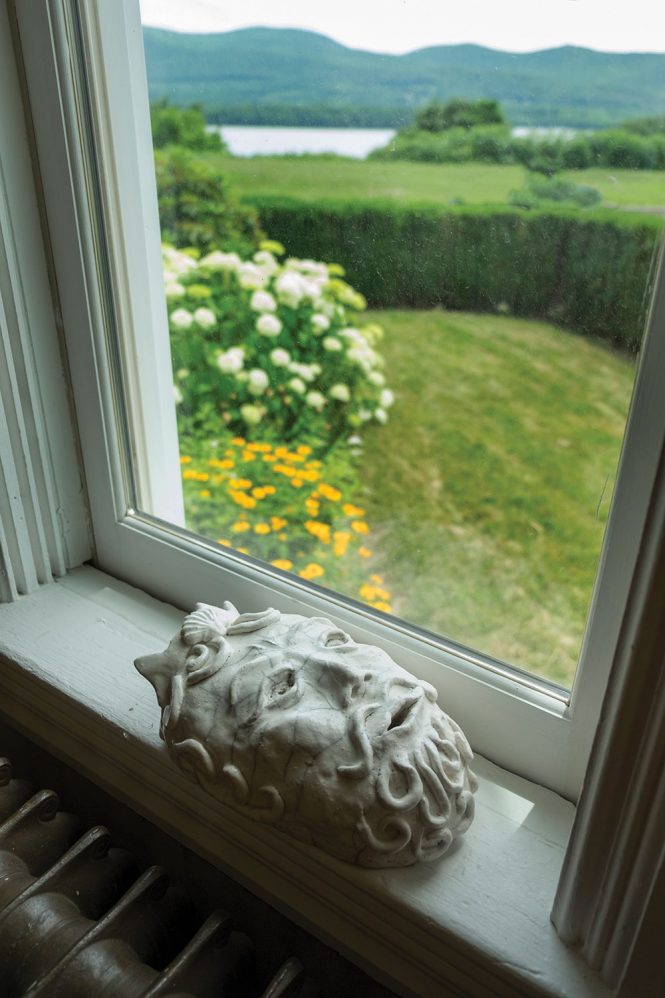 While Americans like to display expensive decorative items and gadgets in their living spaces, in French culture, what you read is more important than what consumer goods you own and what you earn. “Money doesn’t buy you respect, but a love of culture (and especially books) does,” Postel-Vinay writes.

Book collections are often displayed in a personal library, or la bibliotheque, which can comprise an entire room, usually placed somewhere near the entrance or in a designated corner of the living room.

The idea is that through the entrée, you, as the host, are introducing yourself and your family to those you welcome into your home. Your guests will form an impression of you based on your entrée décor—those objects that you choose to represent yourself—and then enlarge their knowledge of you through the titles on the shelves of your library and the other objects you choose to display. The French thrive on creating a sense of mystery and fantasy in their homes, so surprise your guests with the unexpected, and create your entrée to look like the opening scene of your architectural biopic.

Get design tips for creating your own French-style home.