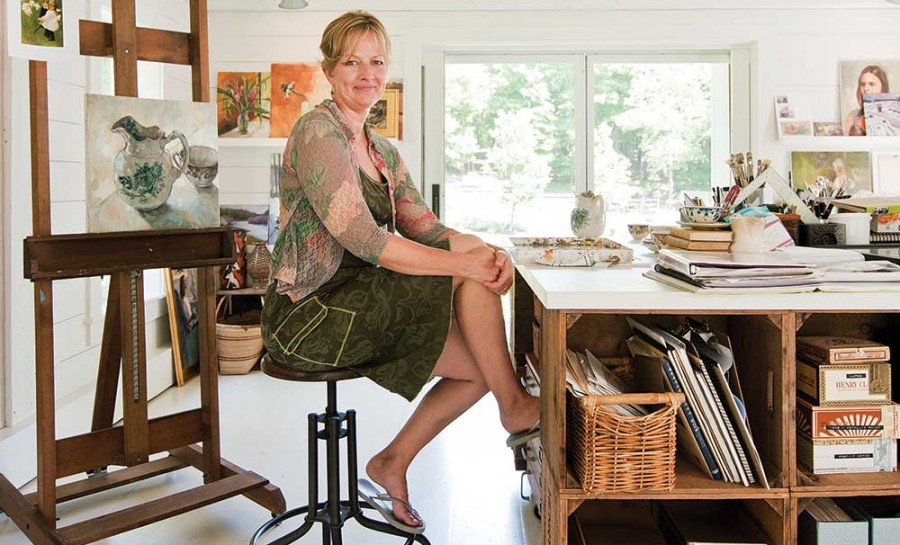 The Dutchess County farmhouse that artist Kathryn Windley lives in with her husband, real estate broker Gary DiMauro, first entered her life as an opportunity to discover herself but has since evolved into a home that magically reflects both their lives.

“I’d always been in a relationship,” she says. “This house was my first chance to ask myself what I like.” When Windley bought the colonial farmhouse on 20 acres in Milan, in 1998, she was working in advertising in New York and was recently divorced. What she first discovered was a place that hadn’t been a full-time home in 60 years. An older farmhouse nestled in a field outside of Red Hook had obvious charm, but much of it was hiding. As Windley puts it, “There was a lot of character to uncover.” The gleaming wide-board floors were buried under layers of paint, linoleum, and newer layers of hardwood. The low ceilings covered hand-hewn beams. The kitchen was dark and claustrophobic. 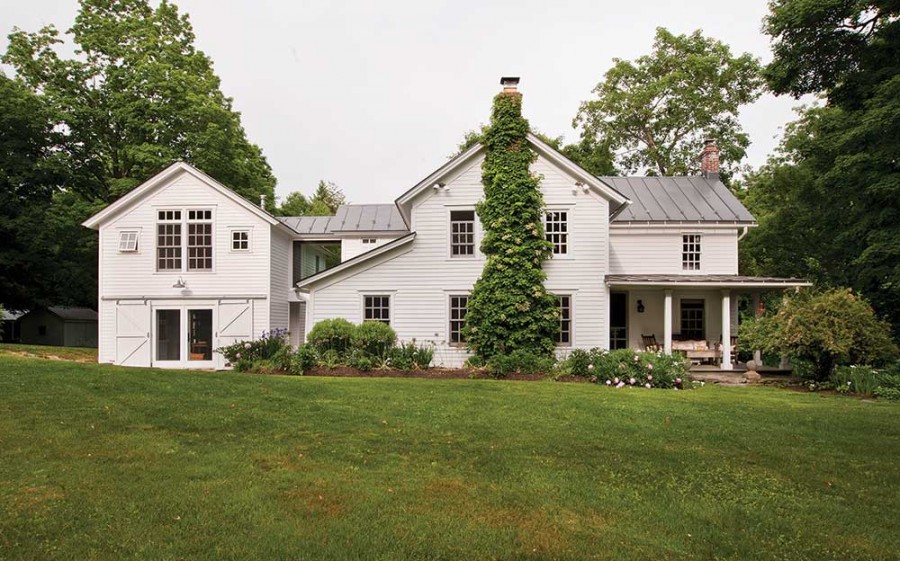 Fifteen years later, not only has every ounce of character been revealed, but Windley and DiMauro have also added contemporary elements, including a two-story, barn-style addition connected to the main building by a high, glass-sided walkway. Contemporary style, carefully done, blends seamlessly with the house’s vintage charm. Windley says she’d done most of the work on the first floor when she began dating DiMauro, and had always dated with trepidation. “I loved this house so much by then that I worried I’d find someone who would want me to move,” she says. “But Gary told me he’d always loved my house. And when he finally moved in, we discovered he had a lot of the stuff I was missing. So then the next challenge was to make room for him, to make sure he felt at home in this space.” Together, they tackled the upstairs, and Windley says DiMauro “really reclaimed the grounds outside.”

DiMauro’s aesthetic is evident in the home the couple now shares. A confessed lighting critic, he insisted that every light in the house be on a dimmer. “I used to be a musician and I love the stage,” he says. “For me, lighting is all about creating a mood.” DiMauro loves modern as well as historic architecture, and the couple has blended modern and vintage elements throughout the home. In the dining room, an antique baker’s table is surrounded by industrial-style metal chairs and illuminated by an original Poul Henningsen metal pendant light (on a dimmer, of course). Antique cabinets brought back from China by DiMauro work comfortably as a buffet and an upstairs storage chest. The now-sunny kitchen appears original, but DiMauro says the only truly original fixture is the massive porcelain farmhouse sink. The couple blew out an exterior wall to create a sunroom / dining nook that overlooks gardens bounded by the stone foundation of the farm’s original barn. 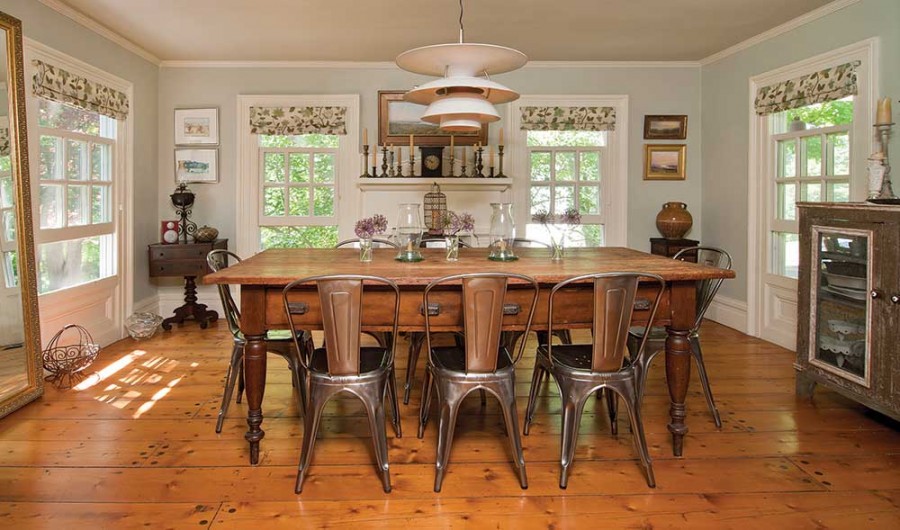 On the far side of the kitchen is a small sitting area, which is the perfect place for guests to gather while a meal is being prepared. On the opposite side of that wall is the living room, which was a later addition to the original house. The floors are a dark hardwood, in contrast to the wide pine boards in the kitchen and dining rooms. The living room has a cozy colonial feel, while the rest of the house is all light walls, bright windows, and views of the lovely grounds.

A step out of Windley’s downstairs office leads to a bright artist studio with large glass doors on either end, allowing her to savor her surroundings from every angle. The monochromatic paint scheme, similar to the rest of the house, includes the overhead beams. “Where the beams were old, we left them unpainted,” DiMauro explains. “But we decided the new ones would be better matching the walls. We did the same thing in the new master bedroom upstairs. It gives it a really airy feeling.”

Back inside, wooden stairs lead to a landing large enough to serve as a sitting room for guests, where DiMauro’s collection of old family photos is on display. Guest rooms, one of them the former master, all feature unadorned windows. “I’m not a fan of curtains,” DiMauro says. “We like to wake to the sun coming in in the morning.” Guests who don’t share the couple’s enthusiasm for morning light are offered sleeping masks. 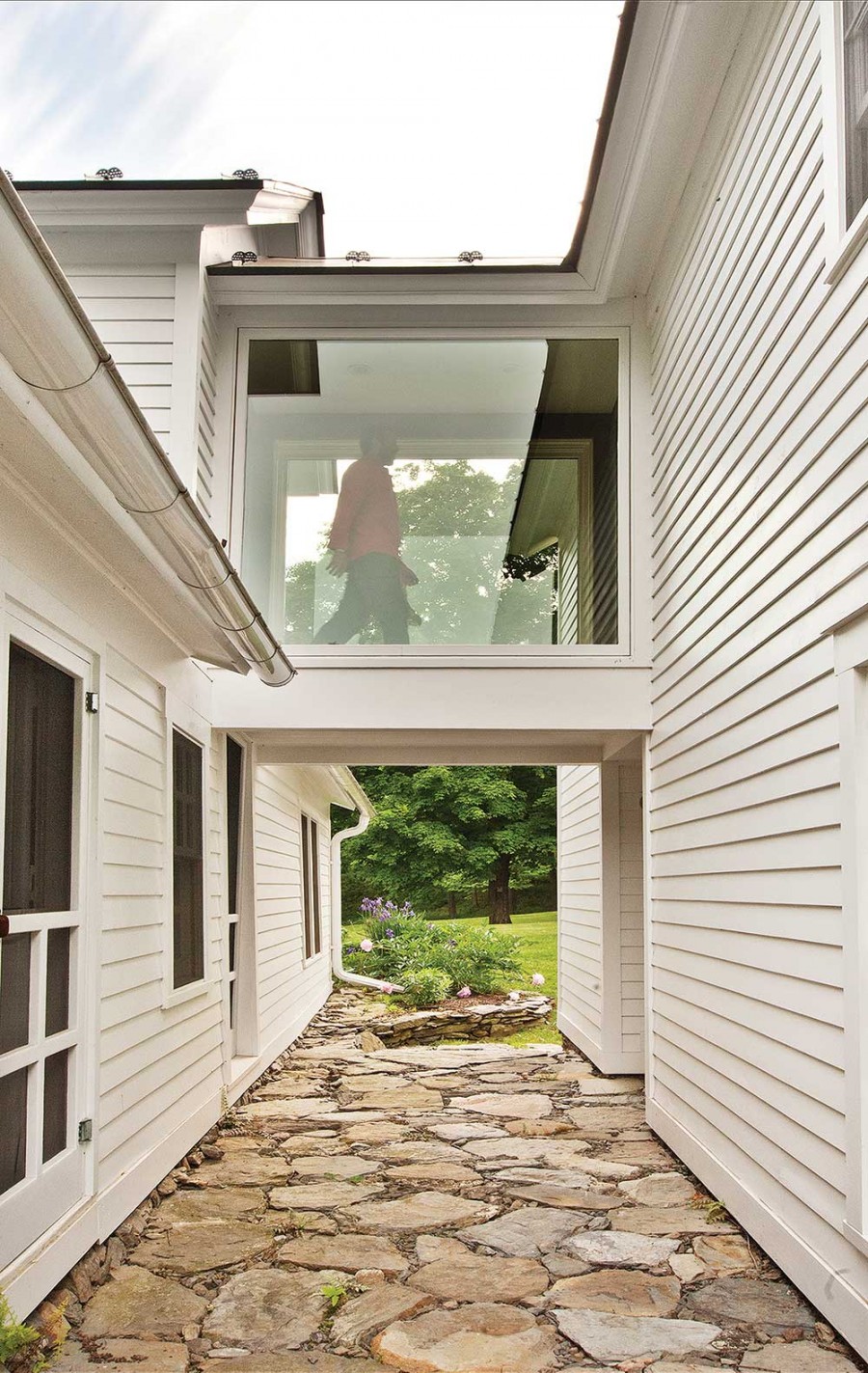 The upstairs bath features the original clawfoot tub and black-and-white basketweave tile floor. One of the smaller bedrooms serves as DiMauro’s home office. A tiny room that previous owners used to rent out as a bedroom in the summer now features a built-in cupboard that was custom-made by local carpenter Emily Majer. “She’s done most of the work upstairs,” DiMauro says. “And she built [cabinets] to match the kind that would have been in this house when it was built.” More of those cabinets are on the right in a second-story hall that becomes a glass bridge to the master suite. The huge plate-glass windows overlook the gardens, above which are paths leading to a pond and the gazebo where the couple was married. “Part of what’s great about this connector between the old and the new is that it allows an unobstructed view, from front to back, outside,” DiMauro says. “We didn’t want to cut off the property.”

The couple’s answer to the space constraints of building an addition that wouldn’t overpower the original house was to create an open-concept bedroom and bathroom separated in the center by a closet that also serves as the bed’s headboard. The bathroom features a large clawfoot tub, two sinks, a walk-in shower, and a private toilet. The large windows have long, sheer curtains for privacy, the one instance in which DiMauro concedes privacy trumps aesthetics. The opposite side of the closet is a spare, contemporary bedroom with a barnsided gas fireplace and two floating bedside tables beside a simple queen bed. “There’s no other furniture in here by design,” DiMauro says. “It’s all about the simplicity of it and the view outside our windows.”

It was during the construction of the addition containing the master bedroom and Windley’s studio that the connection between the house and its occupants became evident. “We were about six months into the construction when the contractor said he was in over his head and walked off the job,” DiMauro remembers. “And on that same day, Kathryn was diagnosed with breast cancer.” It’s a day Windley refers to as the Very Bad Day. But DiMauro took over as general contractor on the project while Windley went through surgery and chemotherapy. “Gary really stepped up, and the follow-up crew was amazing,” she says. “They made it easy and smooth after that, and it was exciting to build something I could look forward to.” 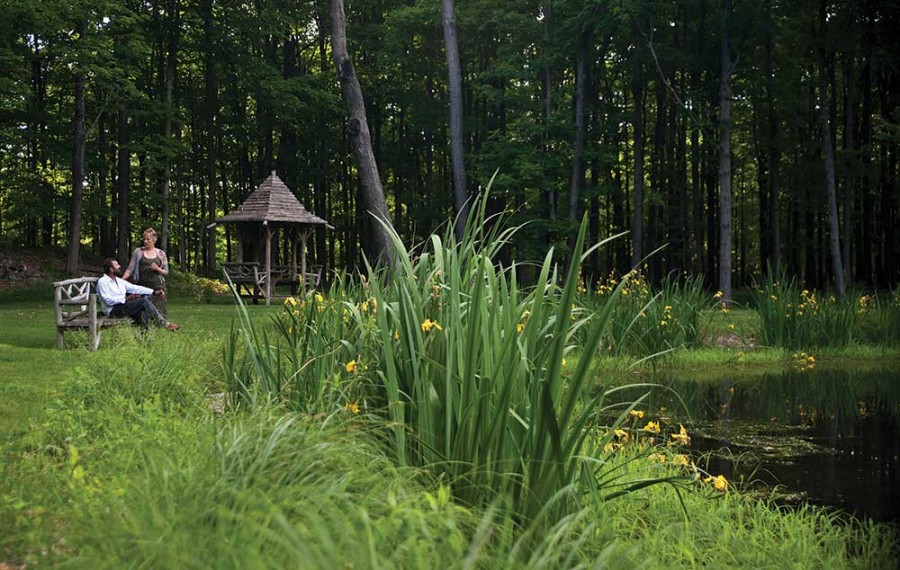 Windley says her illness and recovery was a transformational event, but not the way she expected. “Some people in treatment talk about how they want to overhaul their lives, now that they realize how short time can be,” she says. “I just wanted to the do the small things I already loved, like painting and gardening. Things like that became so much more important to me.”

Four years later, the addition is finished and Windley is healthy and says it all still feels new.

“I’m looking forward to having more time to discover who I am in my artwork,” she says. “And I feel so fortunate that we are living the life that Gary promises his real estate clients. It sounds corny, but this house is central to who we are.” 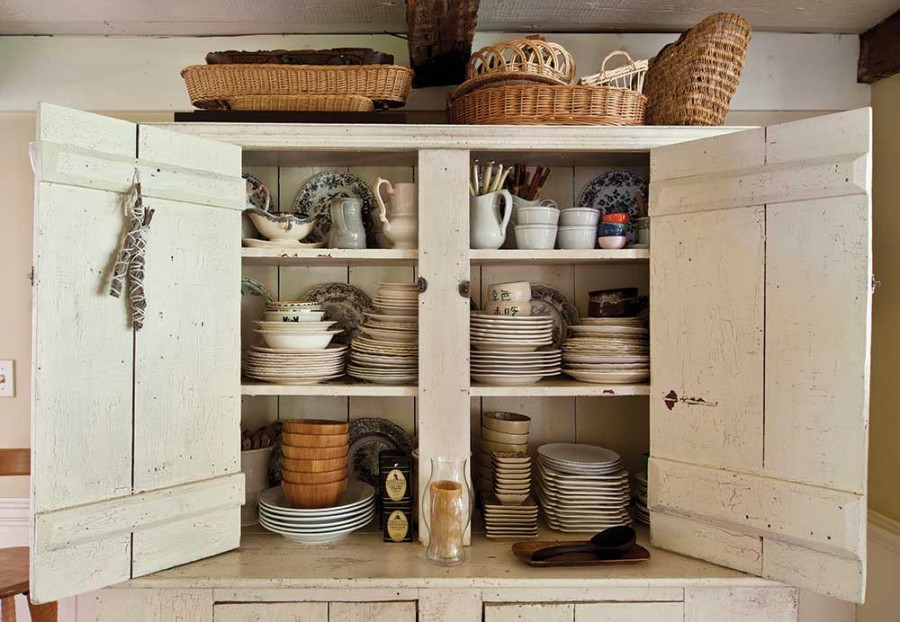