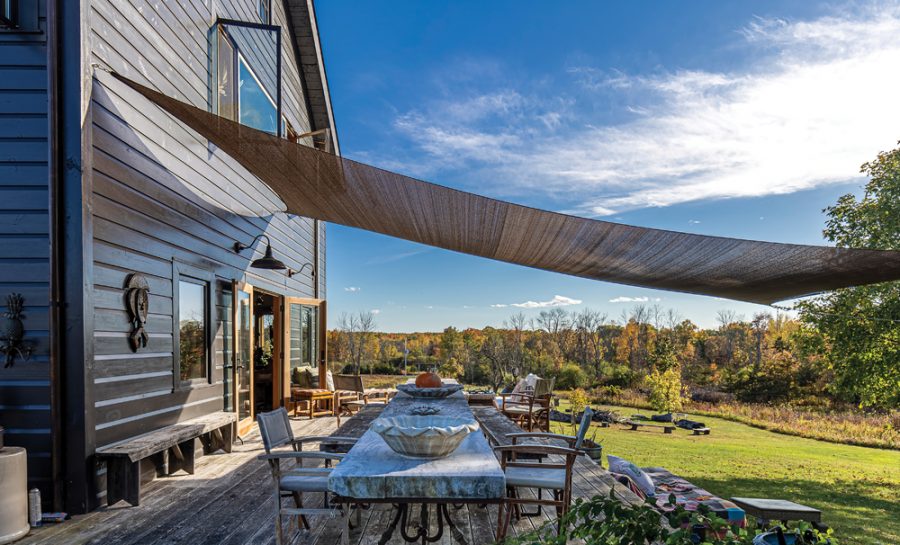 Jason Karadus and Marie-Claire Gladstone had been trying to convince a New York City-based real estate firm to invest in the Hudson Valley market when Corcoran, the renowned agency founded by “Shark Tank” star Barbara Corcoran, announced in January of 2019 that it was ready to start its first franchises. The timing could not have been better.

Karadus and Gladstone were top-performing real estate agents who had worked together for years in New York City and both lived part-time in Dutchess County. They had seen firsthand how popular the Mid-Hudson Valley had become for second home buyers and those looking to relocate upstate from the city full-time. 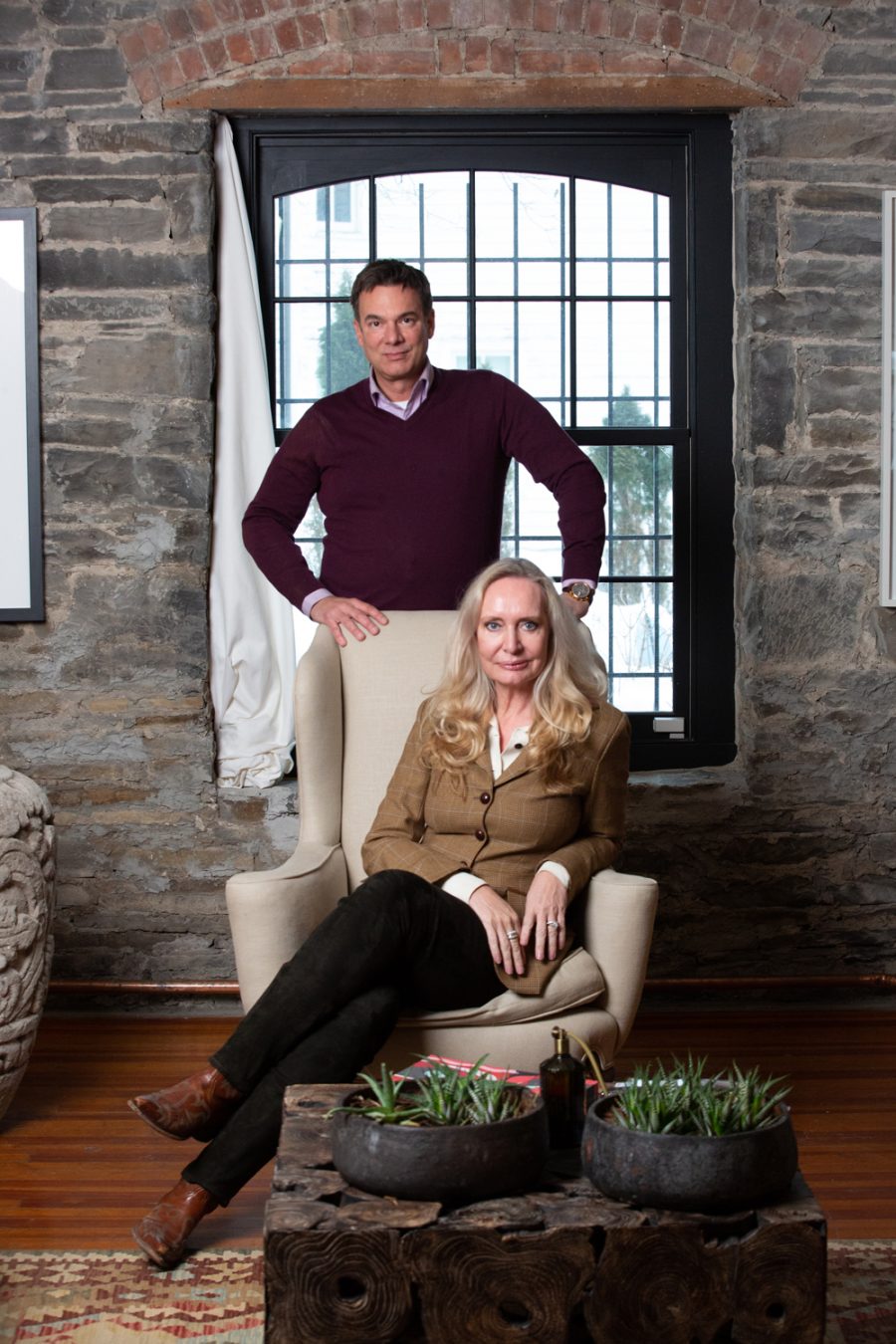 Gladstone, a Corcoran agent of 13 years, reached out to Karadus, a 20-year veteran of the industry who was then working for another city-based agency, Brown Harris Stevens. They quickly got to work on creating a plan for a Rhinebeck-based Corcoran franchise. Instead of starting a new agency from scratch, however, Corcoran wanted Karadus and Gladstone to acquire an established brokerage that already had a team of experienced local agents. “They were very selective about where they were expanding the Corcoran brand,” says Karadus.

In June of 2020, Corcoran Country Living announced its launch with the acquisition of Rhinebeck and Millbrook-based Paula Redmond Real Estate. “Paula said that she needed to get to know us both before she was ready to pass the baton though, so I actually worked as one of her agents for about five months before the acquisition,” says Karadus. “It gave me the opportunity to get to know the agents, because our priority was to maintain the same, close-knit family culture while giving the agents entirely new tools to market to buyers and sellers.”

“We’re very proud of the fact that we didn’t lose any agents or listings during the first transition,” says Gladstone. “The Corcoran name actually helped the agency keep listings that were expiring and convince sellers who were previously on the fence to relist with us.”

In their first six months, fueled in part by the pandemic’s supercharged market and Corcoran’s strong New York City presence, Corcoran Country Living closed so many deals that they rose to number six of 253 offices in the Mid-Hudson Multiple Listing Service’s total sales volume. “People from the city already knew the Corcoran brand and local residents were reacting so positively to our marketing services and our unparalleled reach to New York City buyers,” says Karadus. 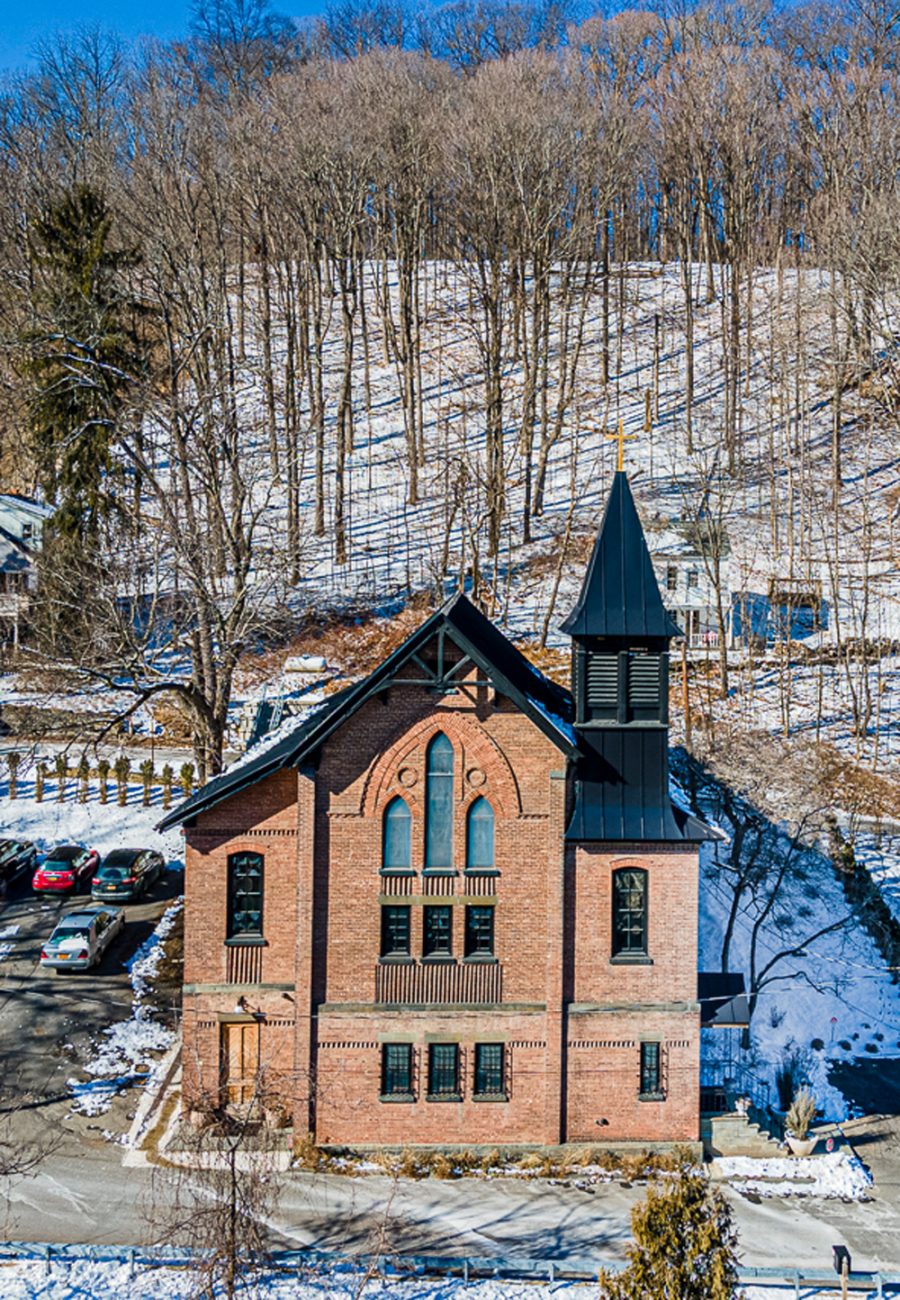 Located just outside of Kingston’s Rondout neighborhood, the 7,400 square-foot former church is a creative’s live-work dream

The two-story, c.1885 brick building was bought in 2018 by an artist who painstakingly restored every inch of the place. The first floor is now home to a loft-like open-concept living space filled with striking details, including colorful lighting fixtures acquired from the renovation of the Russian Tea Room in Manhattan; a new kitchen outfitted with marble countertops, an eight-burner Viking stove, Sub-Zero refrigerator, and French chandelier; plus exposed historic stone and brick walls and all new exposed copper piping throughout.

Upstairs, on the church’s main floor, is an otherworldly studio and gallery space featuring 20-foot vaulted ceilings with dramatic stained glass windows at either end of the room. For the right buyer, the opportunities for the space abound, and it could be easily converted into a private studio or public performance or events space, thanks to a variance in its residential zoning. 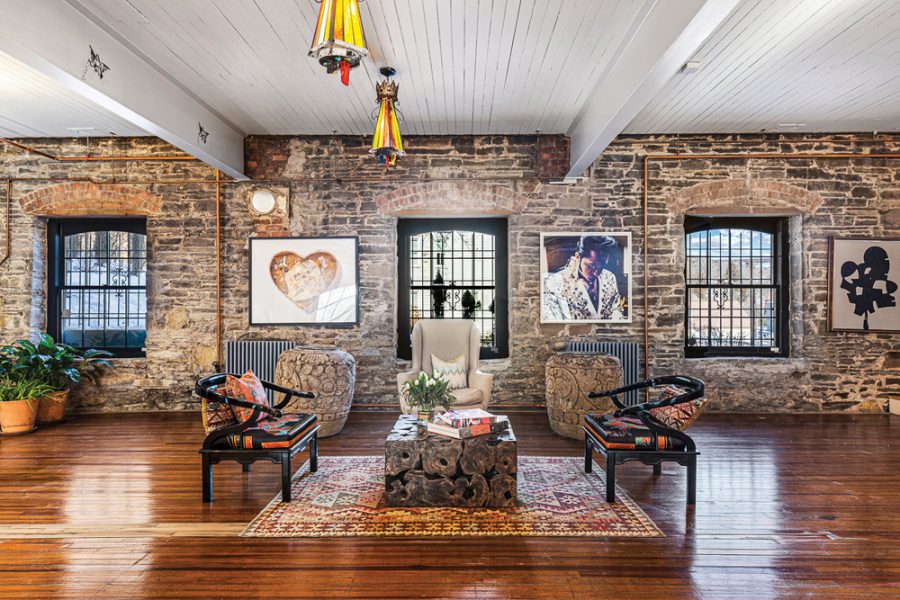 The first floor of 23 Fitch Street, a Catholic church-turned-residence, is filled with artful details, including original exposed stone walls and light fixtures from the Russian Tea Room in Manhattan.

The property had been on the market with another firm for close to six months before Corcoran Country Living acquired the listing this February. In just five days, the agency was able to quadruple the number of showings, a testament to its marketing reach. “It’s the perfect space for creative types. A classic loft space overlooking the water, it feels like quintessential Brooklyn in a way,” says Karadus. “We feel that we’re best positioned to really get this out in front of as many local and city buyers as possible. We’ve got several Corcoran city offices also pushing the listing and we’re reaching out to photography studios and galleries who might know interested buyers.”

With housing prices that have been historically lower than much of the region, Kingston, and Ulster County in general, have become attractive to more people who are looking to get in on their own upstate sanctuary. “I would say two-thirds of the referrals we receive from other Corcoran offices are people who want to buy in Ulster County,” says Karadus. “There’s so much creativity here, incredible access to the outdoors, and value. It’s certainly attracting a different, and younger, demographic than Rhinebeck or Millbrook.”

Ulster County and Beyond

The surge in interest on the west side of the Hudson, coupled with Corcoran Country Living’s success since acquiring Paula Redmond Real Estate, is what led Karadus and Gladstone to jump on their second acquisition in less than a year. “We had always planned to expand across the Hudson, but Corcoran and Realogy both encouraged us to go ahead now,” says Karadus.

In March, Corcoran Country Living will expand its offices into Ulster County with the acquisition of Lawrence O’Toole Realty, another well-respected independent agency with over a decade of history in the area and locations in Woodstock and Uptown Kingston. “Larry thought that Corcoran was the best fit for him and his agents, and they will be best positioned by becoming part of the Corcoran family,” says Gladstone. 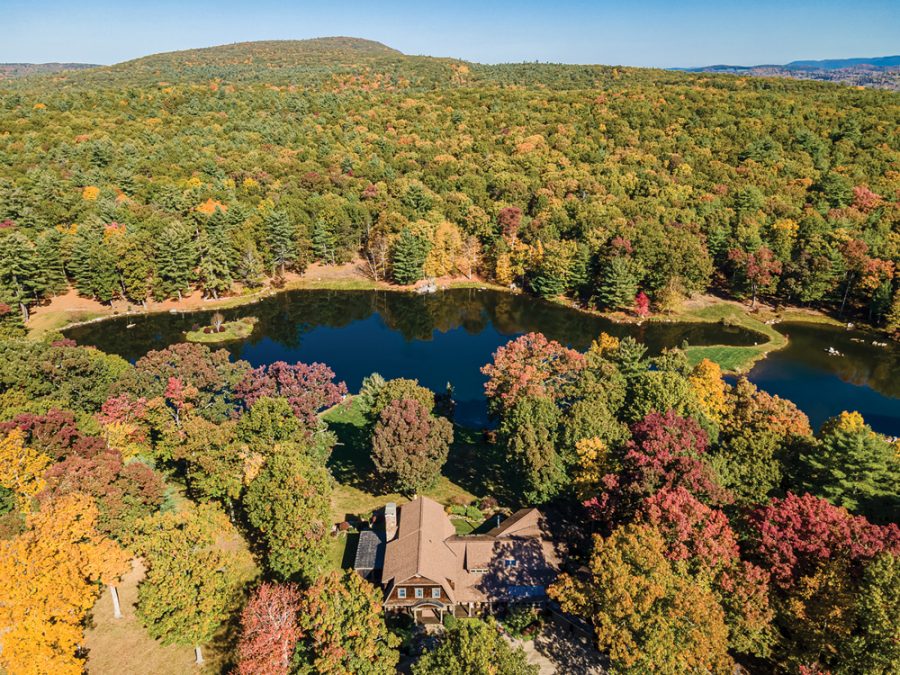 On the market with Corcoran Country Living, this 125-acre Dutchess County estate is surrounded by nearly 6,000 acres of protected land.

Both Karadus and Gladstone acknowledge that there could have been some resistance to a city-based agency coming into the Mid-Hudson Valley, but the response so far has been positive. “Thanks to Paula and Larry’s combined experience, people are already familiar with them and their agents,” says Karadus. “We’re ultimately the same team, just with a broader reach and a lot more marketing tools at our disposal.” 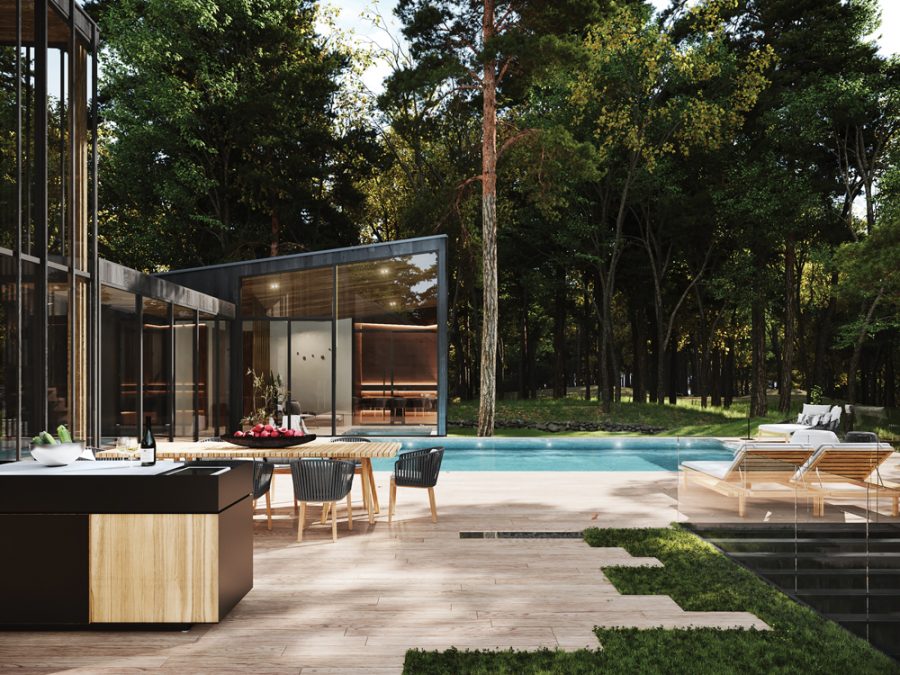 Whether the agency is listing luxury compounds like Sylvan Rock, Aston Martin’s first foray into home design that will break ground in the Hudson Valley this spring, or more affordable homes for families looking to settle down in the area, Karadus and Gladstone feel confident that Corcoran Country Living’s future as one of the region’s leading real estate agencies is bright. “Our goal is to bring our long history of professionalism to the area and provide an experience that is a step above the rest,” Gladstone says.