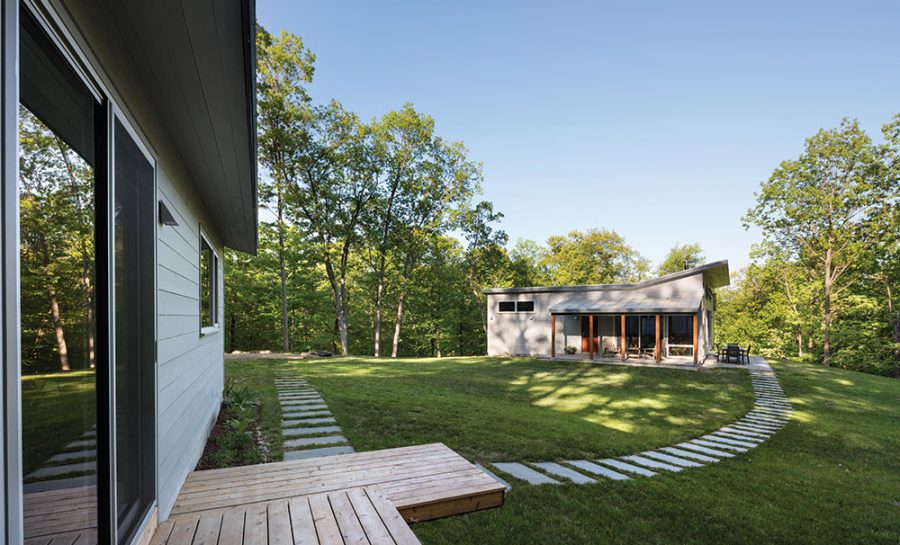 Like most architects designing homes for themselves, Karin Payson wasn’t blessed with the robust project budgets that many of her clients enjoy. But there was one luxury she could afford that her clients couldn’t: time.

Currently living and working in San Francisco, Payson and her husband Michael, a videographer, both have East Coast roots and had long been thinking about how to slowly transition their lives and careers from the Bay Area to the Hudson Valley at some point in the future. But the future arrived sooner than expected when 16 sloping acres went up for sale on Lake Drive, near Rhinebeck, right next door to Payson’s cousin’s house. The couple wasn’t ready to build, neither financially nor conceptually, but the opportunity was too good to pass up. They bought the lot in 2003 and decided to take their time getting to know the land before building.

They took 10 years. Their soon-to-be-neighbors made a clearing and built them a tent platform. The couple spent a few weeks every year camping out on the site, walking the land, watching the light change, picking up rocks, and dreaming.

Payson toyed with the idea of carving viewing areas out of the thick groves of trees, but over time she came to love the privacy that they provide. “Hugging the hillside, making the house very discreet and small, felt like the right thing to do,” she says. “I wanted to feel like we were really inhabiting this site instead of ignoring it.” 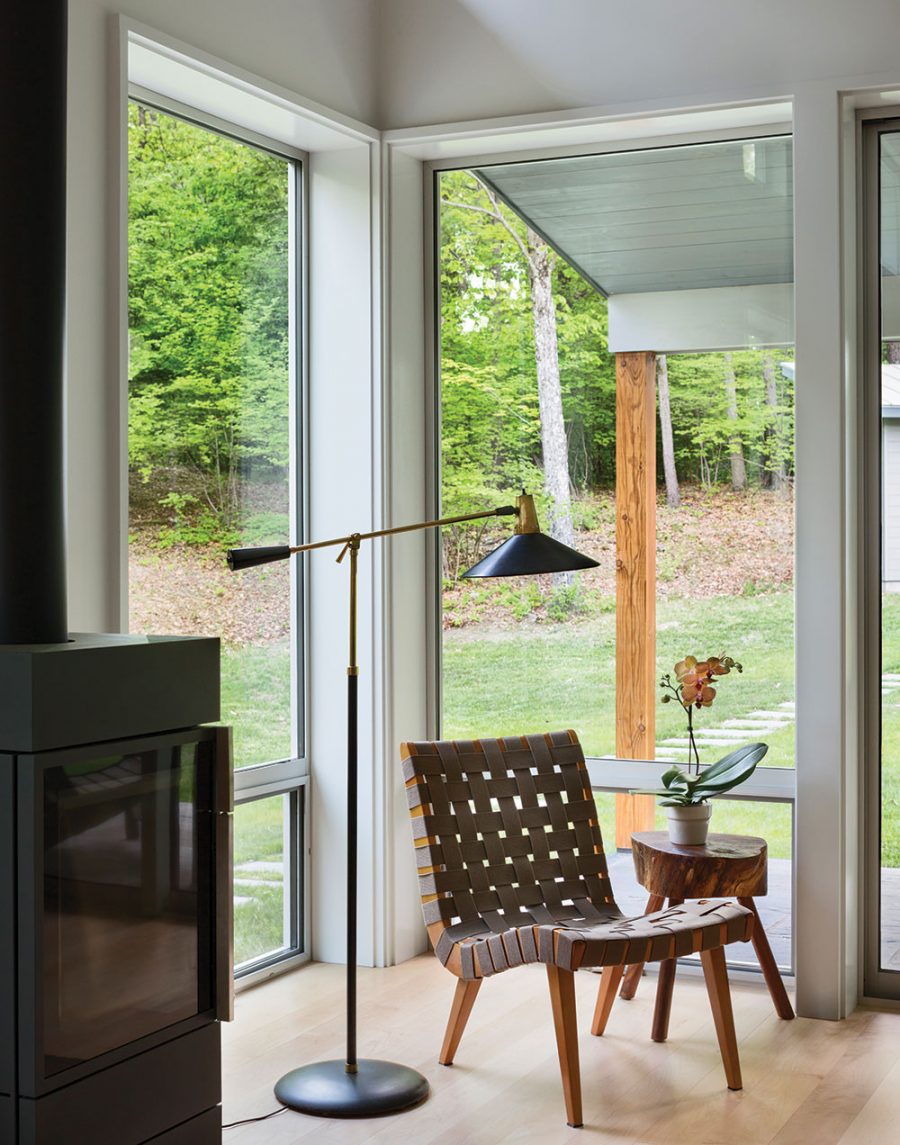 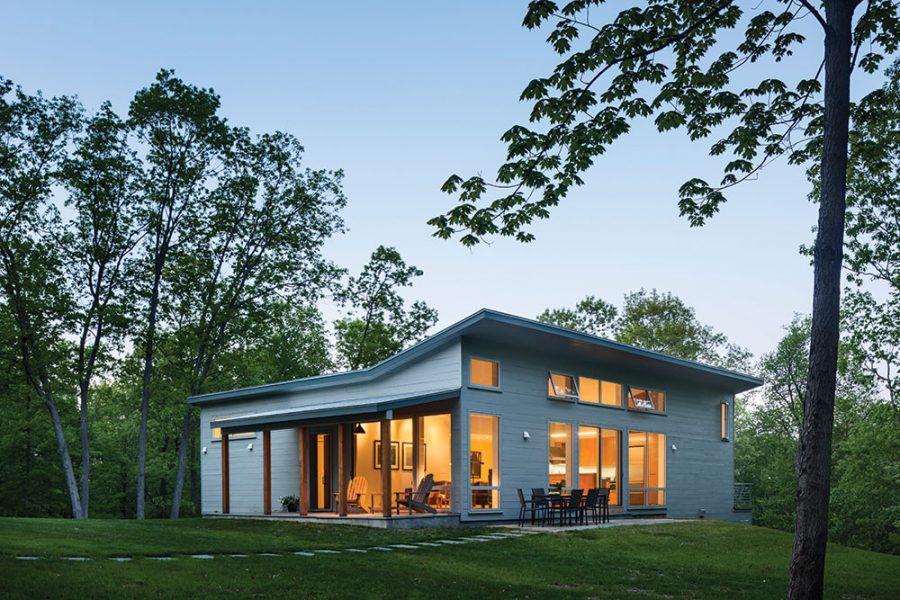 Ironically, Payson’s inspiration to build a house that felt in harmony with the site and respected the history of Hudson Valley architectural styles came from her experience on the West Coast. She had seen what happens when transplanted East Coasters ignore the punishing slopes of San Francisco and Marin County, building suburban New Jersey-style ranch houses as if they were on a flat site. “You see these houses with decks 30 feet up in the air and all this land underneath that’s wasted,” she says. “It looks bizarre.”

So, in Rhinebeck, as she’s done with clients in the Bay Area, Payson kept the house’s profile and envelope low, burrowing into the hill. The result is a house that, from the initial approach, seems small, unobtrusive, and reserved. But packed inside are 1,970 soaring square feet that hold a large open living space and three sleeping areas that are both spatially and acoustically isolated. 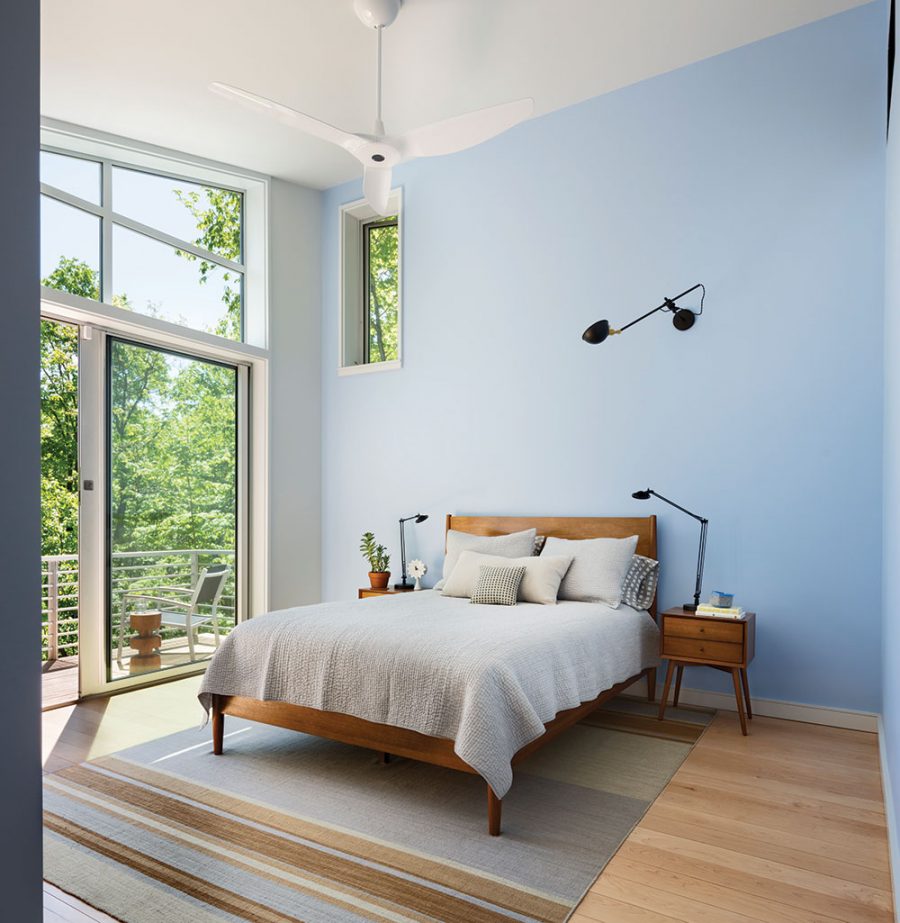 Building sustainably on a budget meant that Payson had to think about how the house’s orientation could passively control the interior climate instead of tricking it out with expensive equipment. Burying the majority of the house and keeping the north side relatively free of exposures allowed Payson to take advantage of the ground’s warmth and shield the house from winter winds. The south side is largely given over to glass, and during the day, expansive windows flood its interior with light, illuminating the walls’ muted color palette of pale greens and blues, and mirroring the colors of the trees and sky. A walnut tree felled from the property became the kitchen counter as well as the staircase’s railings and bannisters, adding warmth and harmonizing with the wooden floors. The house’s furnishings and fixtures have been kept subtle and spare so that nothing detracts from the views that dominate every bedroom and the main living space thanks to large windows and glass doors.

A few bluestone steps up the hill from the house is a 450-square-foot structure that serves as Payson’s work studio, yoga room, and, in a pinch, another bedroom. In one of the project’s few overt nods to luxury, the outcropping also holds a richly wooded sauna, connected to the studio via a breezeway. Like the main house, the outcropping is bedecked with wide windows, but the slightly higher elevation and carefully chosen window placement makes it difficult to see inside one building from the other. Despite their close proximity, each building remains its own secluded retreat. 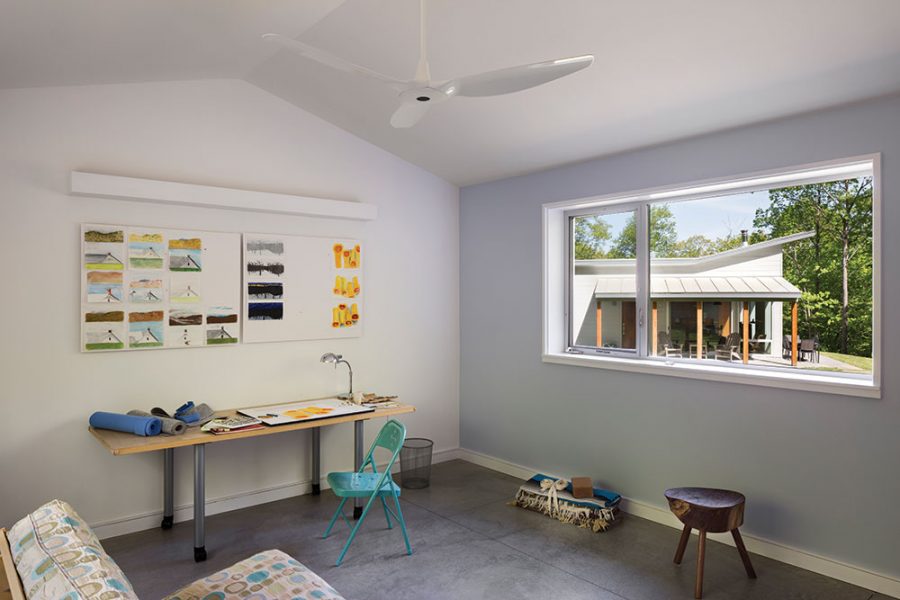 The Paysons rent the house out for most of the year, returning to Rhinebeck every fall for vacation and again in winter to celebrate the holidays there. But the more time they spend in the house, the harder they find it to stay away, Payson says. So the couple recently got clearance to sublet their house in San Francisco as well, so that they can begin transitioning back to the East Coast. “I miss waking up to the sunrise [in Rhinebeck],” Payson says. “I miss the connection to nature, the smells, the peacefulness.”