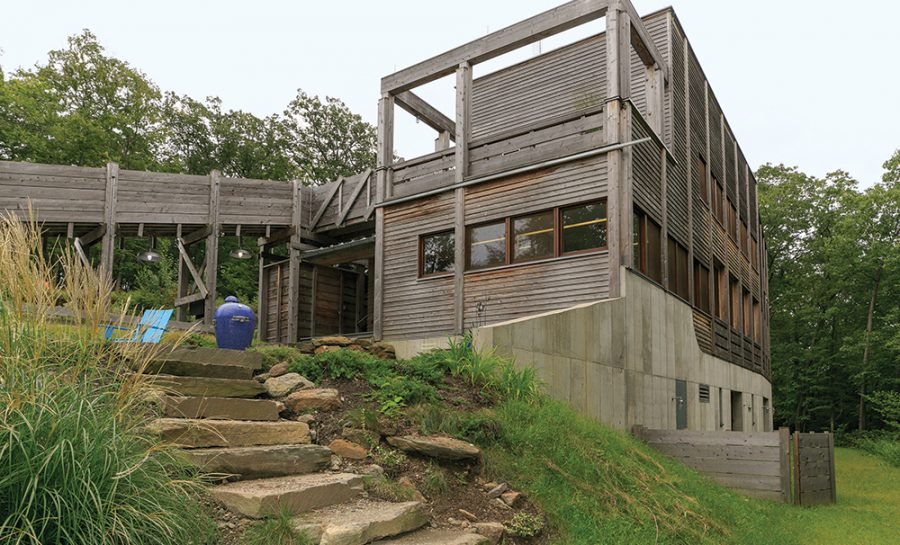 It started with a husband needing to get a 40th-birthday present for his wife—a situation that is often fraught with peril. In this case, the husband, a lawyer, decided to give his wife, a modern dance choreographer, some land on which to build a weekend house. He wanted it to be about an hour and a half from Manhattan via train and then about 15 minutes from the train station, according to New York City-based architect Anik Pearson.

“Those were the only parameters, so I made a huge circle around Manhattan on the map and went out to find the perfect place,” Pearson says. It was all about the land, since the couple planned to build a house, and they didn’t care about having a fabulous view. “We’ll just make our own views,” the husband told Pearson. The priority for the house would be having easy access from many different levels to the outdoors for hiking, walking, and even sleeping. “We’ll make our own haven,” the husband said.

Because the husband is an art collector, Pearson looked around artsy locales such as Beacon first—but no luck. After a month of looking, she hit pay dirt. “I didn’t have to even go look in Long Island or New Jersey because I found the right place in Pawling that wasn’t a farm. There were a lot of farms for sale, but they tended to be clear-cut and flat, so you could see your neighbors.” 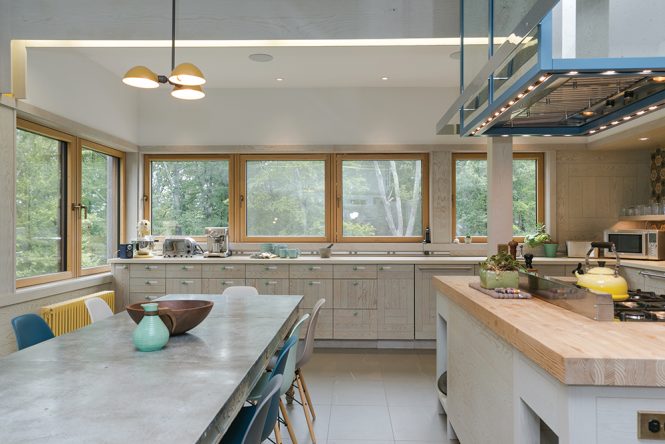 Since the view was the priority in the kitchen the client chose windows rather than upper cabinets. Easy-care, durable materials, such as the quartz countertop and large-format porcelain tile, were also a must. The Eames Molded Plastic Dowel-Leg Side Chairs are from Design Within Reach; the zinc-topped table is from Restoration Hardware.

The property Pearson chose is 68 acres across the road from a small mountain—the 1,053-foot-tall Hammersly Ridge—and featuring several different zones of vegetation. A young oak forest sits on one side, an old hemlock forest is on another, wetlands are on the third, and then, on the fourth side, is the Pawling Nature Reserve. Nearby, the Appalachian Trail winds around via a boardwalk spanning the Great Swamp. “It feels like four properties put into one,” Pearson says. “And it just happens to be near the Appalachian Trail, so you could very easily walk for hundreds of miles if you choose to, or just walk the trails on your own property.”

Once the property was found, a decade passed before the house had been built and was move-in ready. In the intervening years, Pearson and the family walked the site over and over, in all seasons, and with landscape architects from Reed Hilderbrand. “They were seeing this property with the long lens of it being somewhere they could build their legacy for their children and the next generation,” says Pearson. “They made a master plan of all the walking trails and cross-country ski trails before settling on where the house should be. It was a long process of really getting to know the land and the best aspect, the best views, the best place for cool summer breezes, and where the owner should know that he would never see a house across the way, because he overlooks a nature conservancy.” 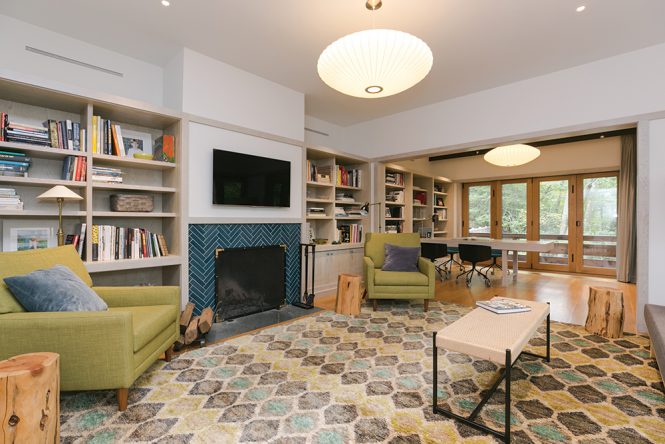 Floor-to-ceiling slide-and-fold doors on the living area’s southern side let in breezes and forest scents.

The design of the house was inspired by a firewood storage structure remaining on the land, built by a previous owner, as well as the husband’s upbringing in Washington State, which is replete with ferny, mossy forests dotted with old mining structures. “It feels a lot like a Pacific Northwest property,” Pearson says. “It really puts you in a different place. It’s so close to Manhattan, yet so removed in the way it feels and operates.” For inspiration, the clients gave Pearson an encyclopedia of modern architecture. “He said he really loves anything Scandinavian,” Pearson says. “And, funny enough, I think of traditional Korean architecture as being very compatible with that. So we took our cues from those preferences; we took the spirit of those buildings and made something new.”

Pearson, who has also designed an Upper West Side apartment for the couple, created the Hammersly Ridge house to be a year-round weekend escape, and, eventually, a retreat for the wife’s modern dance troupe—with a dance studio, rehearsal space, performance space, and guesthouse. For now, the three-story house (with a basement niched into the hillside) has three guest suites downstairs and five upstairs bedrooms. Despite this, it doesn’t overwhelm the landscape. “It’s designed efficiently and compactly,” Pearson says, with few hallways inside and easy access from outside. The top floor has a roof deck and direct access to the outdoors (on the family’s wish list) via a long ramp linking terraces on different floors. The terraces function as sleeping porches, and there’s even an outdoor shower underneath the ramp. The materials used were meant to weather naturally—the exterior’s natural cedar siding and unlacquered brass hardware—and not need to be stained or painted (and repainted). “We were going back to older materials that were traditionally used on old buildings, that would weather and age well. They went for low-maintenance materials that improve beautifully with age,” Pearson says. The landscaping doesn’t require a lot of irrigation or mowing; it’s mostly wild grasses, ferns, and ground cover.

The easy-to maintain vibe is true indoors, too—the kitchen has tough-as-nails Caesarstone countertops and large-format porcelain floor tiles. “Porcelain is a really great, durable material,” says Pearson. “It is hard and impervious, doesn’t scratch, and is easy to clean.” The kitchen centers around a custom-built range hood made of metal and antique mirror; it’s meant to “disappear” by reflecting the verdant view. The family wanted nothing interfering with the view while they were cooking and eating, hence the lack of upper cabinets. “They wanted the kitchen to be easy for everyone,” Pearson explains, “so that the kids could see where all the cups and plates were and could easily grab them.” 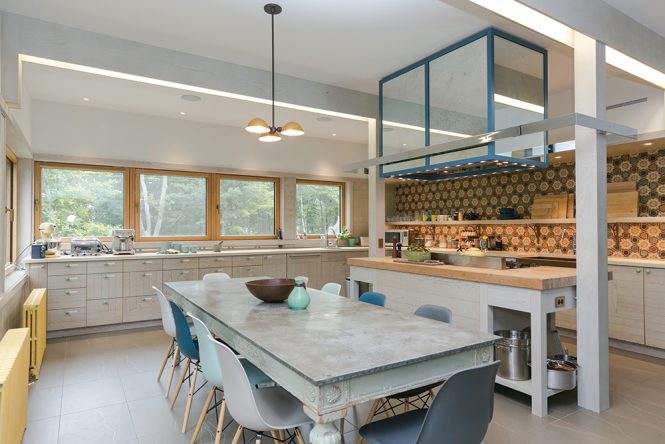 The kitchen cabinets are whitewashed oak

The children’s bathroom walls are resilient, large-format porcelain in a shade of gray. “We wanted to give the children the ability to draw on the shower walls, like on a blackboard,” Pearson says. The room is top-lit with skylights. Recessed lights surround the skylight perimeter. Natural light is also abundant in the master bathroom, which has a band of windows and a corner window in the shower, says Pearson, and “the best views in the entire house, with a 270-degree panorama of the nature reserve.”

Although the husband collects art, he couldn’t see himself filling the walls with it. Instead, “They wanted it to be casual, yet beautiful, where all the views were celebrated,” says Pearson. “He thought of his windows as his art. It was a very conscious choice to let nature be the art.”

Pops of color throughout the house—primary-bright doors, radiators, furniture, and even the bright blue Kamado grill outside—refer to an inherited set of Fiesta dinnerware. For the furnishings, Pearson used neutral tones and natural wood to provide an easy-to-maintain foundation. “You know how some projects are instantly furnished?” she says. “From one day to the next, you move in and have a whole library of books that no one has ever read. [These clients] wanted to collect a lot of things over time and have it be theirs and have a story.”

In the end, she says, her firm spent a decade helping the clients purchase “almost everything in the house,” including its beds and beside tables; a teak dining table and chairs; an antique Scandinavian hutch on the screened porch; a zinc-clad table and multicolored chairs in the kitchen; the living room’s sofa, armchairs, side tables, and rolling desk chairs; and the linens, shades, curtains, decorative lights and lamps, and rugs throughout the house. 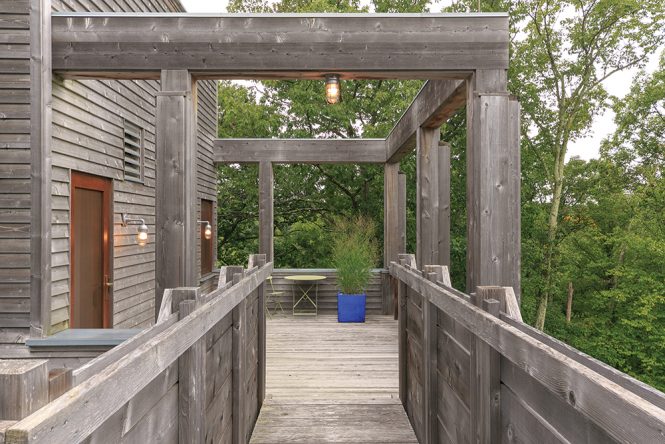 Pearson hails the contractors who worked on the house—from Robert Bump Construction on down. “In the big picture, redoing or building somebody’s house is one of the biggest expenses in anyone’s life,” she says. “It doesn’t just take the designer. It’s always a team of people, a very complex process. Everyone who comes onto the stage really contributes to the process and problem-solving, which makes the project successful.” For example, she cites the outdoor sconces installed on the siding. “The carpenter was offended that any light fixture not to be absolutely true and straight, so he made special pedestals for every one of those exterior fixtures, so they could hang straight and true. It was those kinds of little things that really made the project come together.”