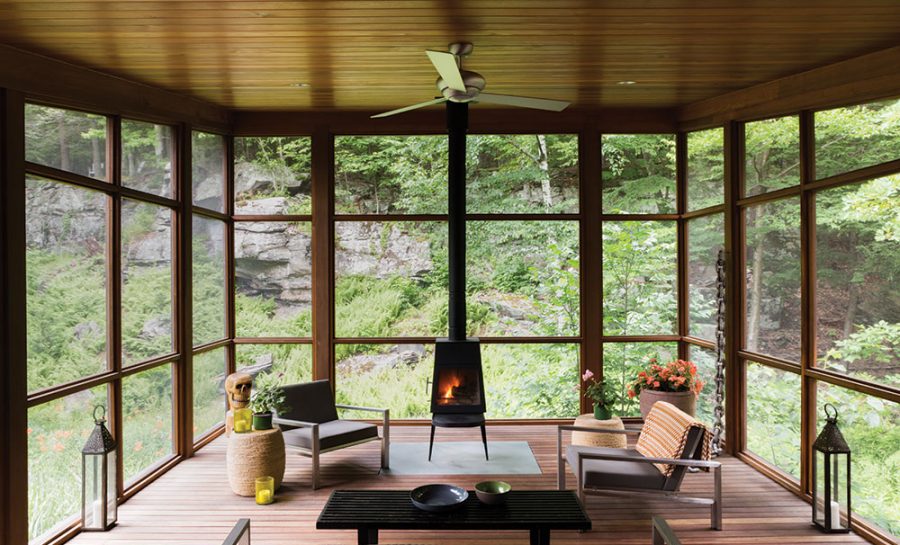 It all started with a porch.

After visiting friends upstate for years, Susan Lobel, a New York City-based corporate lawyer, and her husband Richard, a marketing executive, decided to buy a less-than-800-square-foot weekend cottage in Woodstock. It was a simple setup—two bedrooms, one bathroom, and a big screened-in porch—and the Lobels and their two children loved it. But seven years later, the family found the cottage increasingly cramped, so the Lobels decided to tear the house down and rebuild on their plot of land. But they were reluctant to part with their screened-in front porch.

“The thing that came up over and over again,” explains their architect, Brendan Coburn of CWB Architects in Brooklyn, “was that the original cottage had a screen porch with a tall ceiling. That was their favorite part of the house. [It] became the basis of the whole project.”

Coburn already knew the Lobels well, having renovated their Brooklyn Heights brownstone and visited the Woodstock property, so he understood what mattered most to them. He designed the new 2,700-square-foot house around a 16-foot-by-24-foot all-cedar screened porch, facing the bluestone ridge and cantilevered over the stream; today, the porch holds a dining room table, couch, two chairs, and a woodstove for use in fall and spring. Indoors, at the opposite end of the house, the living room’s fireplace mirrors the porch’s woodstove.

The Lobels nicknamed the family retreat Bug Acres, which, while much beloved, is a “mosquito haven,” admits Coburn.

The new screened porch, like the old one, is a place for the family to relax outside, protected from the mosquitos, as well as entertain.

“When you’re upstate, it’s a constant influx of people coming and gathering and hanging out,” Susan Lobel says. “That was really important, to have a good space for entertaining.” 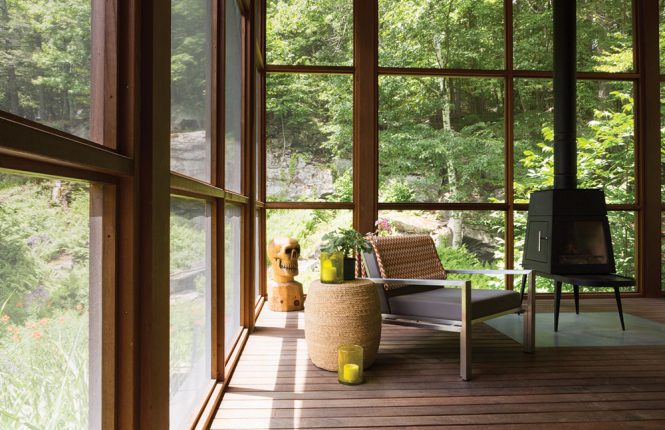 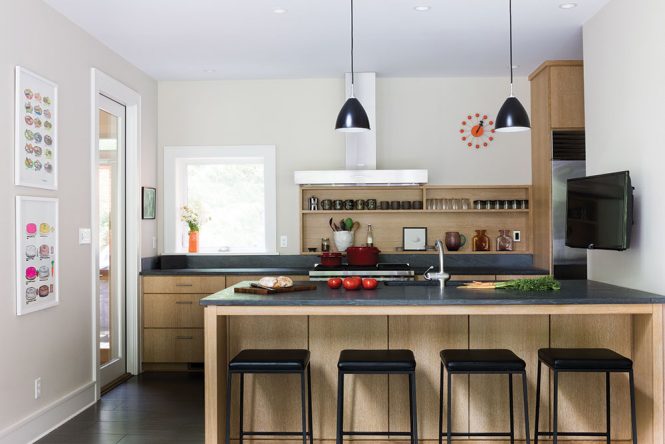 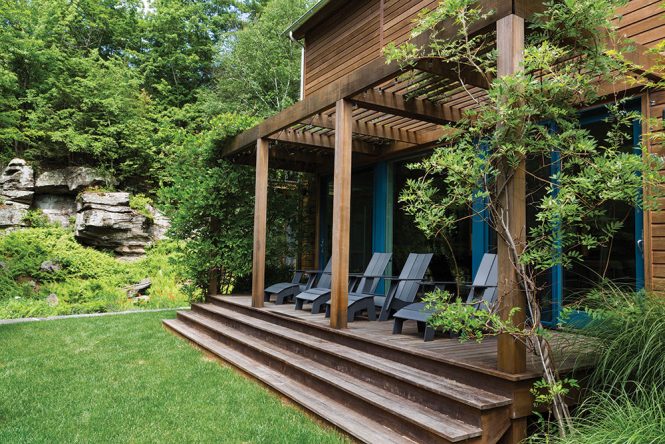 Living in harmony with nature was also high on the Lobels’ list of requirements for the new house. Bug Acres sits on six acres of woods and wetlands, flanked by a small stream and a bluestone ridge. “Our concept was really sort of a modern farmhouse. We wanted to keep it simple,” says Lobel.

Yet another priority was that the new house be equally cozy and functional and include communal and individual spaces for the couple and their children. Lastly, the Lobels wanted a house that would eventually become their retirement home, where their children could visit for years to come.

The living and dining space has a 24-foot ceiling and two walls of large windows. On the wall facing west, toward the bluestone ridge, two vertically stacked seven-foot-by-seven-foot windowpanes allow for more sunlight during winter. On the adjacent wall, facing south toward the wide lawn and marshy wetlands, is a six-foot-by-eight-foot horizontal window and sliding glass doors to the backyard deck. Even on a cloudy day, the first floor is flooded with light.

The space is decorated with earth-tone furniture, including a stained white oak dining table by Emmanuel Delalain, a console by Wüd Furniture Design, a couch from Design Within Reach, two midcentury lounge chairs, and a bleached maple bench/stool by Chris Lehrecke in Hudson. Throughout the first floor, the house’s flooring is teak-stained oak, while the kitchen floor features Italian ceramic tiles.

Also located on the first floor are a guest bedroom and bathroom, mudroom, and master bedroom, which has its own fireplace, bathroom, and glass-door access to an outdoor shower and Jacuzzi on a small deck. (The shower is enclosed in a stall, and a short wooden wall provides privacy for the Jacuzzi.)

Upstairs is dedicated to the Lobels’ children, who are now teenagers, and includes a hallway office nook with computer; a full bathroom; two bedrooms; and a lounge area including a couch, television, and card table. The kids’ bedrooms and lounge room feature cut-out windows overlooking the living room below.

“We have a similar setup in the city, where the kids have their own bedrooms and bathrooms and lounge area,” Lobel explains. “They can be separated when they want to be, and join us when we’re lucky enough to have them.” 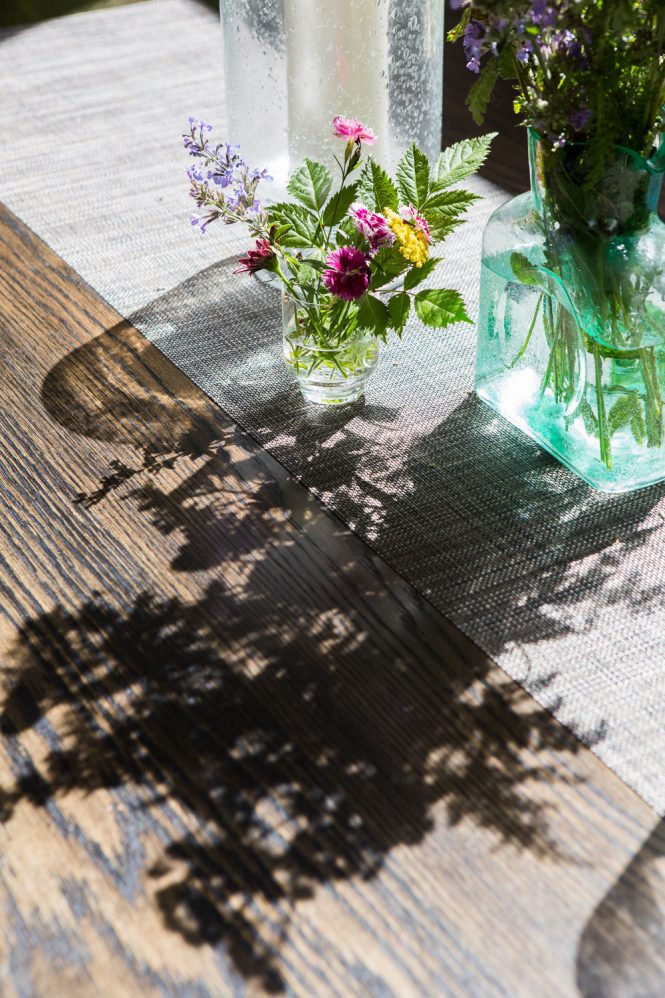 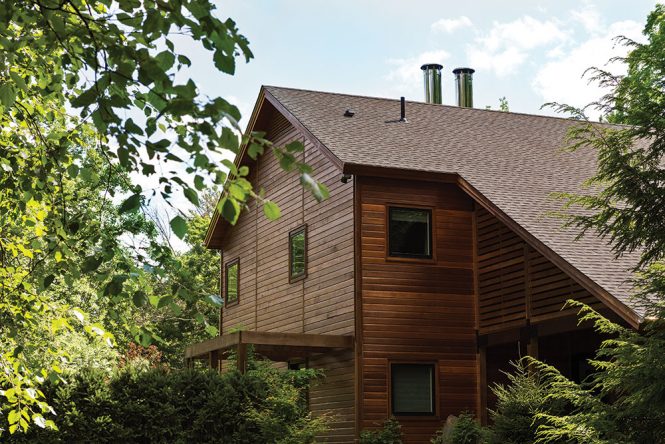 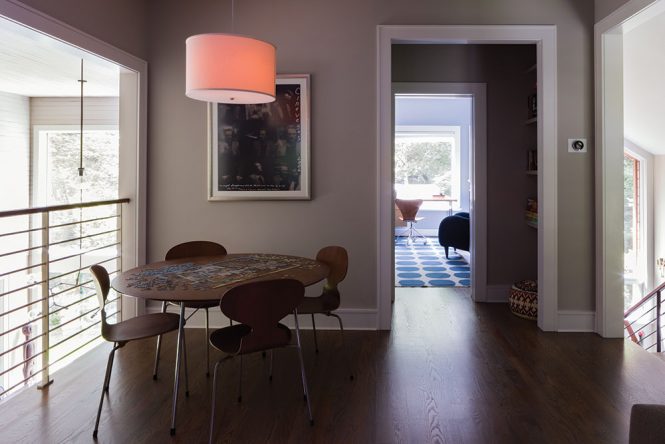 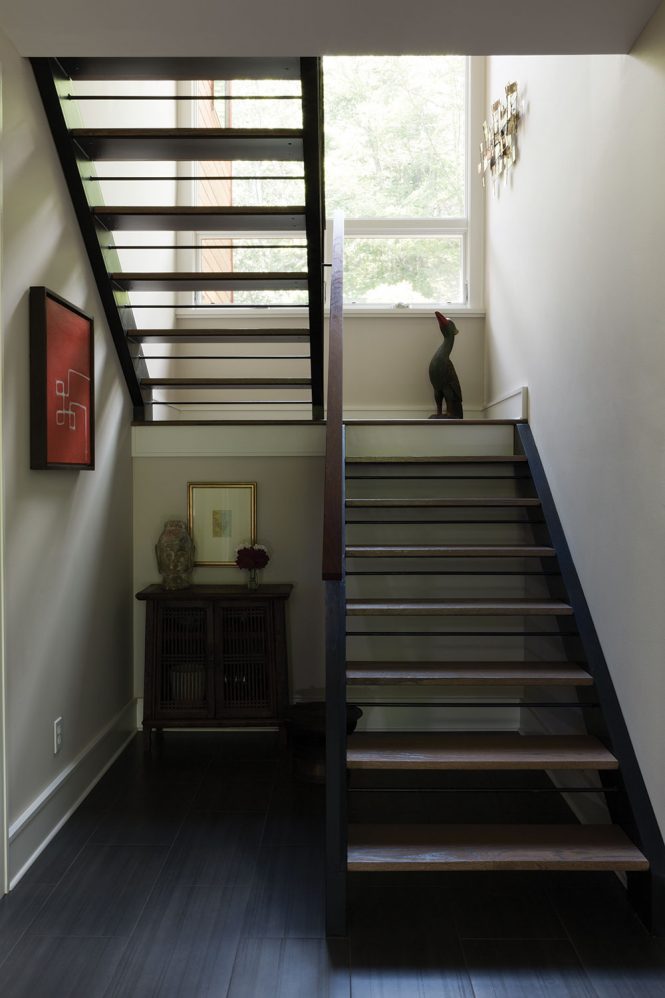 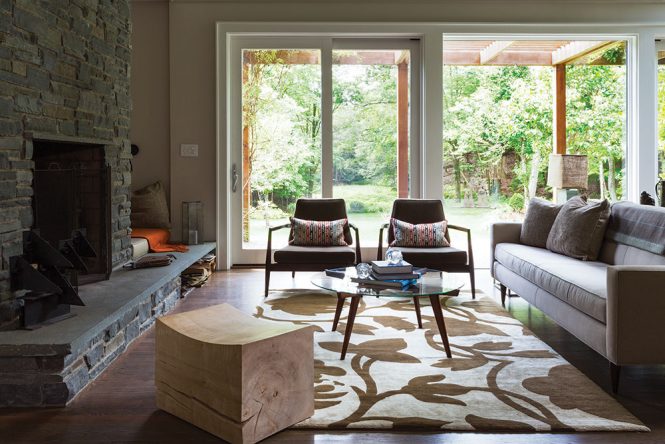 While the house wasn’t specifically designed to be green, its roof is angled to optimize the solar electric collectors, an 8KW system that produces up to 1,400 kilowatts hours of electricity per month. Since the heating and cooling system is powered by electricity, the house is almost 100 percent self-sufficient.

The only hiccup in the house’s yearlong construction came when it was discovered that the water table was higher than expected. As a result, Coburn had to jack up the house by three feet and create a crawl space underneath it instead of the originally planned cellar. To hide the crawl space, the Lobels created a plant-lined terrace and angled bluestone wall off the exterior south porch, which sits beneath a trellis. It’s a comfy place to rest, with four matching gray Adirondack chairs and side tables.

“One of our favorite things to do in the morning is all sit out there and have coffee,” says Lobel.

The backyard features a fenced-in, heated swimming pool surrounded by lilac bushes and a vegetable garden, as well as a handmade fire pit and hammock on a small wooded hill. “The children kind of made a little village up there on the other side of the stream. They call it ‘Bug Town,’” Lobel recalls.

The house is set at the end of a long driveway, ensuring maximum privacy, but it’s a five-minute drive to the center of Woodstock, making this family oasis not only private but also convenient. “It feels warm and very calm to be there,” Lobel says.