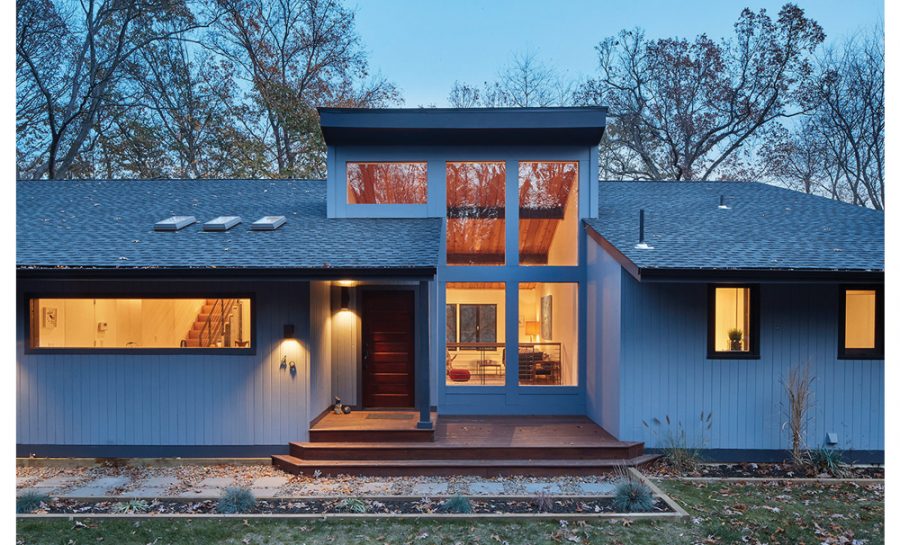 After more than a decade of living in Brooklyn, architectural photographer Garrett Rowland and his wife Jillian, a design publication editor, yearned for a weekend escape. The California natives wanted to offset their busy weekday schedules with leisurely weekends spent outdoors, so they decided to start looking upstate for a second home.

Finding a house that was move-in ready was definitively not on the couple’s wish list. Thanks to their creative professions, the Rowlands are well attuned to the nuances of design, structure, space, and color, and they were eager to take on a home renovation project. 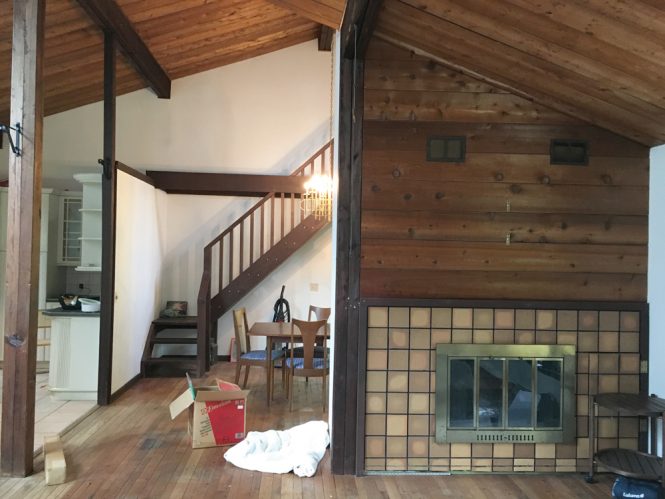 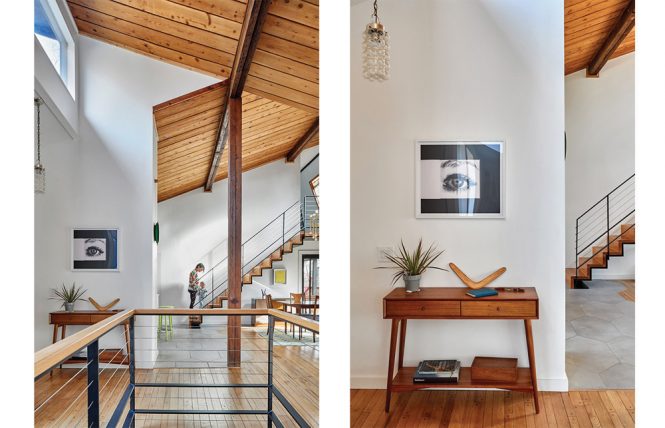 After the renovation. Left: The view from the newly opened staircase of the foyer, dining area, and loft staircase. Right: A close-up of the main foyer.

While scouting out houses off the Taconic Parkway, they reminisced about their college days, when Jillian attended Vassar College and Garrett was a student at Pratt Institute in Brooklyn. They decided to focus their search on Beacon, which they had passed through many times, traveling on Metro-North to visit each other.

After a six-month search, the couple fell for a 1970s three-bedroom, three-bathroom home not far from Beacon’s Main Street. Although the house was in a state of disrepair, they appreciated its overall structure and were excited about its potential. They were also enticed by its  hilltop location and the canopy of trees that give the 1.5-acre property privacy. 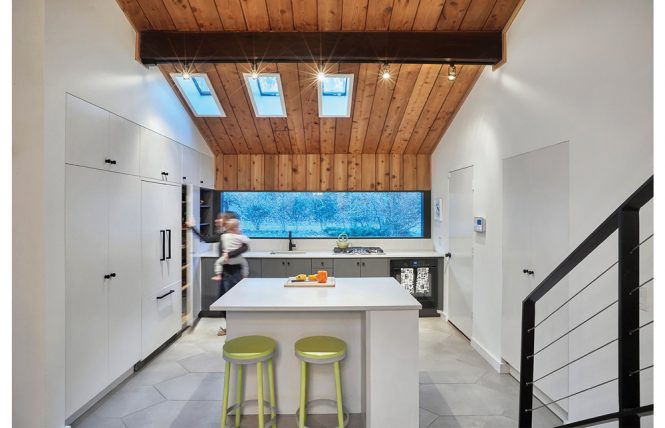 “Initially built in pieces, the home included decks, closets, lots of walls, a loft above the garage, and an office addition,” says Jillian Rowland. “With the redesign, we wanted to make it feel more cohesive yet have separate spaces for entertaining, resting, and working.”

The couple called upon their longtime friend Stephen Conte, a fellow Pratt graduate and the principal of STUDIOSC in Brooklyn. “Since we work in the design field and wanted to be hands-on, it was essential that we have an open dialogue from planning through completion,” says Rowland. STUDIOSC’s redesign involved reimagining the floor plan to open up the space. The mission: to honor the integrity of the house’s original ’70s-style architecture, but create a more contemporary aesthetic. 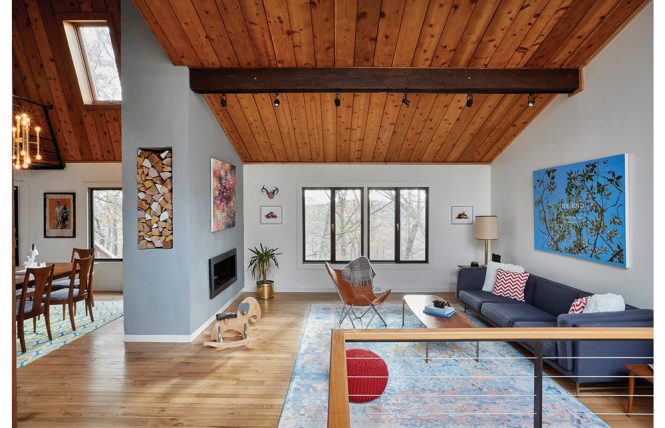 Wall storage for kindling for the new fireplace is part of the decor.

The main living room was originally the house’s centerpiece, but it was separated from the kitchen, so STUDIOSC joined the spaces by removing walls and adding windows. “This led us to realize that the project was going to be extensive, a full gut-renovation,” says Conte. The flow of the original layout sectioned the space off into separate rooms, he explains. STUDIOSC also opened up the interior partitions to showcase the stairs to the loft.

The revamped kitchen area is awash in white, and the modern ambiance contrasts well with the rustic sensibility of the space’s original vaulted ceiling. Built-in, white-lacquered cabinets, created by Hudson Valley Cabinet & Woodworking in Fishkill, are seamlessly integrated into the walls. The white countertop, back splash, and kitchen island are offset by wooden kitchen stools, which are painted light green. An elongated window extends across the entire back wall, and white hexagonal floor tiles from Highstyle Stone & Tile in New York City contrast subtly with the room’s other textures to create interest. A door in the kitchen area links the house to the garage. 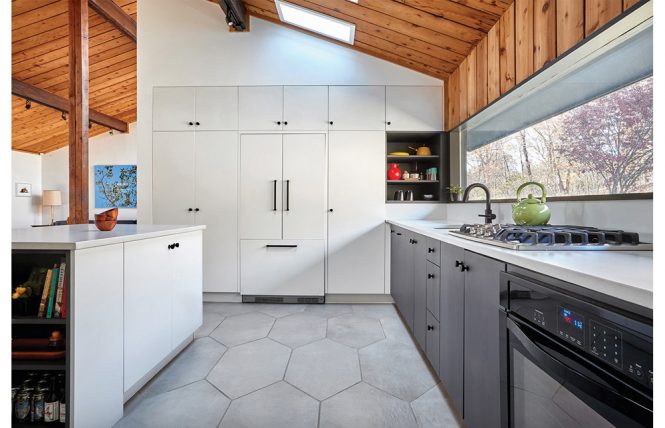 The integrated pantry doors blend seamlessly into the walls for the newly opened kitchen.

STUDIOSC also redesigned the original staircase, which extends from the kitchen to an office loft. The cantilevered, floating staircase, created by Acadia Stairs in Fishkill, serves as a showpiece, breaking up the space without physically separating the kitchen from the dining area. In the bright, airy dining space, a modern chandelier looms above an elongated table, and a colorful, vibrantly patterned rug adds artistic flair. The dining area opens up to an upper and lower deck overlooking the backyard.

Preserving the character of the vaulted ceilings in the living room, which is adjacent to the dining area, was a priority. The original ceilings were stained to resemble cherry wood and sealed with a high-gloss finish. STUDIOSC stripped the sealant, sanded the wood, and added a water-based satin finish for a more contextual feel. 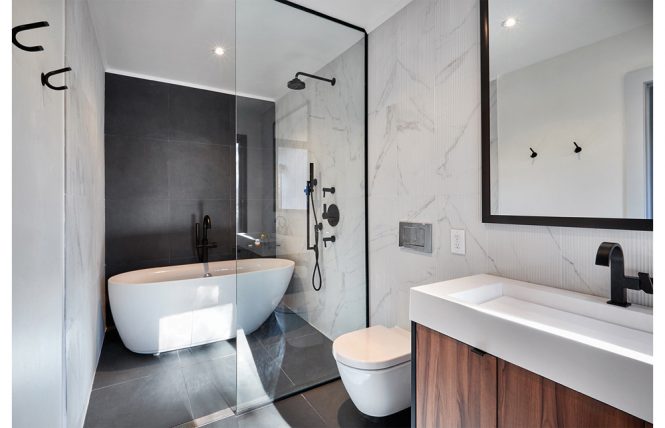 The master bathroom has a spa-like feeling and features a free-standing white tub that contrasts with the dark wall.

Orange accents in the living area’s furnishings pop against the blue and gray palette. Large windows welcome the sunlight, which sparkles across the original, refinished hardwood floors. The windows look out onto the front lawn, which was landscaped only slightly to retain the natural look and feel of the original site.

The three bedrooms were designed for simplicity and comfort. “The master bedroom is the only space with wall-to-wall carpet. It gives a sense of comfort, especially in the wintertime,” says Conte. 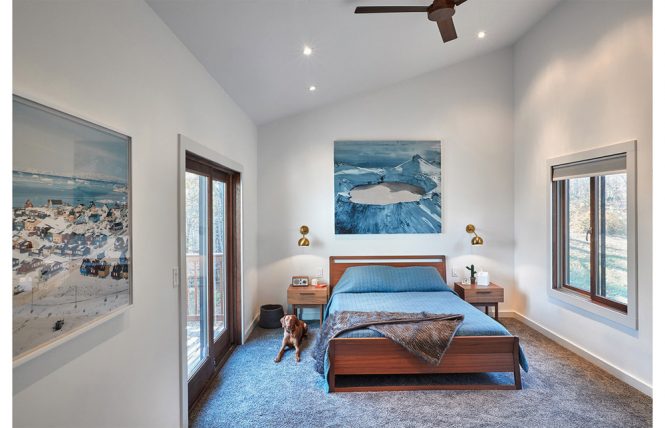 The master bedroom is the only space in the house with wall-to-wall carpet, which the designer installed for added comfort.

As is the case with many fixer-uppers, the three bathrooms were dated and required a full renovation. Conte decided to “contrast the warm, decorative living spaces with a spa-like feeling.” The focus of the master bath is a white freestanding tub that is set against a dark tiled wall (also by Highstyle Stone & Tile). Custom walnut vanities by Hudson Valley Cabinet & Woodworking add warmth.

As with any renovation, there were a few surprises along the way. Replacing the front windows revealed structural problems that triggered a compete wall renovation. Construction also continued longer than planned—beyond the birth of the Rowlands’ son. But the couple feels the renovation was well worth it, since it’s brought them the “blank slate, to be filled with art and life,” explains Rowland, that they envisioned from the start.