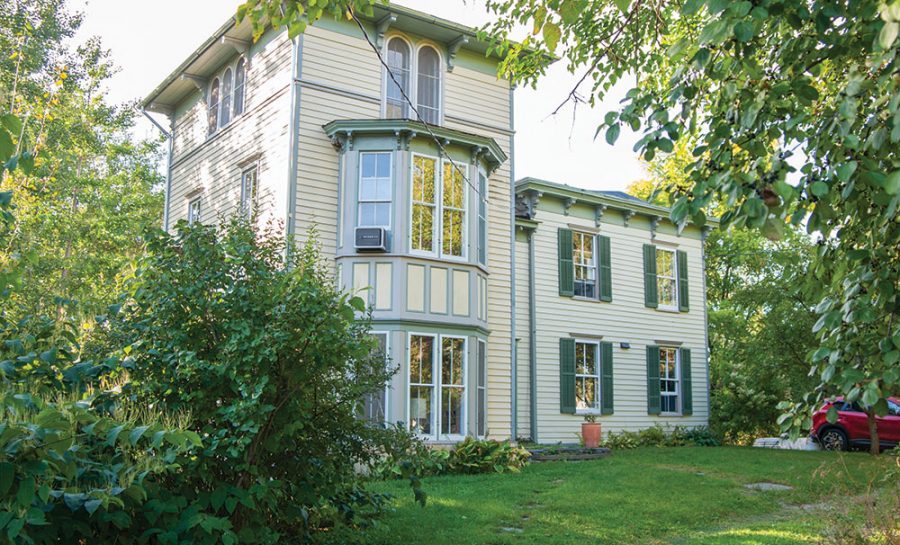 [THE EDITORS OF UPSTATE HOUSE CHOSE TO PROFILE THIS HOUSE AND HOMEOWNER. THE FEATURED HOUSE IS NOT FOR SALE.]

Perched proudly on a gentle rise overlooking the Hudson, and looking like a two-tiered, gingerbread-trimmed birthday cake, Lorenzo Salazar’s glorious 1870s Victorian house in Germantown would seem hard to miss. That is, if you were looking for it.

“I found this place by accident,” admits Salazar, his sense of disbelief still palpable after nearly two years of ownership. “I wanted to get out of Brooklyn, but I’d committed myself to getting a place in Hudson at the time. I didn’t really even know about Germantown. And then a friend called me and said, ‘I saw this amazing house in Germantown.’ As soon as I drove up and walked in through the side door of the older part of the house, which leads into the kitchen—well, that was it.”

Doors, along with dozens of sun-loving windows and an overall sense of stoic grace, are something this 2,100-square-foot Italianate jewel is long on. The oldest part of the structure, a cozy, Mansard-topped box, contains the modern kitchen with its welcoming island, river-view dining area, two upstairs guest bedrooms, and one of the house’s two full baths. It also sports the ornately carved twin doors of its original main entrance—which, when viewed from the circular driveway, are actually at the back of the house, facing the river. 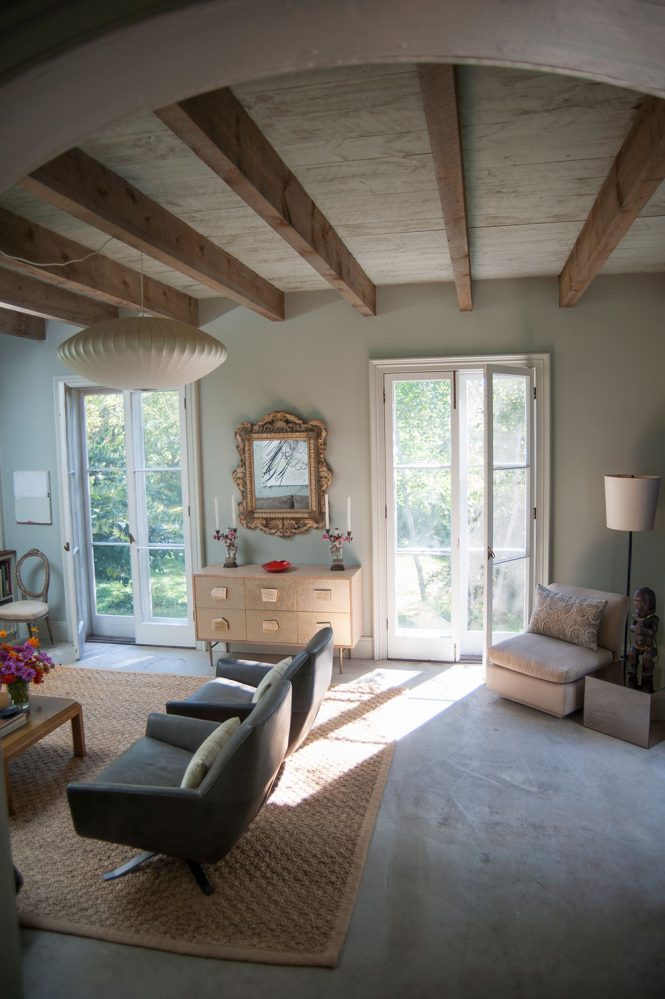 The home’s quiet color scheme and mix of mostly midcentury and contemporary furnishings are complemented by an eclectic array of colorful art objects and collectibles; Salazar in his studio. Photo by Roy Gumpel.

“From what I can tell, whoever built the house must have been in a business that had something to do with the river being a commerce route back then,” says Salazar, a New York City-based interior architect and designer. “The [four-acre] property used to be an orchard where pears and apples used in Beechnut baby food were grown. So, one guess is that maybe the original owners were in the fruit trade.”

The home was enlarged in 1992 with an addition that mirrors the original house’s architecture. Today the newer side—a stately, three-story, bay-window-bulging construction—is joined to the original house by a two-level connecting hall, which features the main entrance and a nook used for storing dinnerware. The wood-beamed ceilings of the older quarters are carried through the first floor, and the newer, tower-like portion holds the master bedroom and en suite bathroom with a soaking tub as well as an expansive, French door-surrounded living room offering still more sun and sweeping views of the Hudson and the surrounding countryside. Heat comes from the radiant first floor heating system and a woodstove in the abutting kitchen; wide-plank floors continue from the new construction’s elder counterpart throughout the upper levels, the topmost of which houses Salazar’s studio. 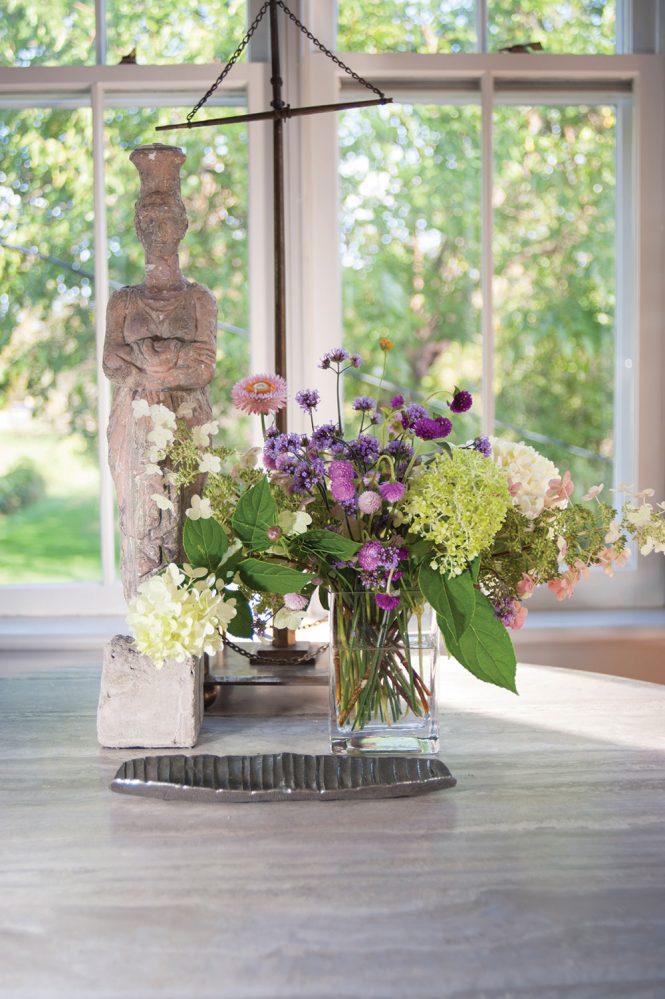 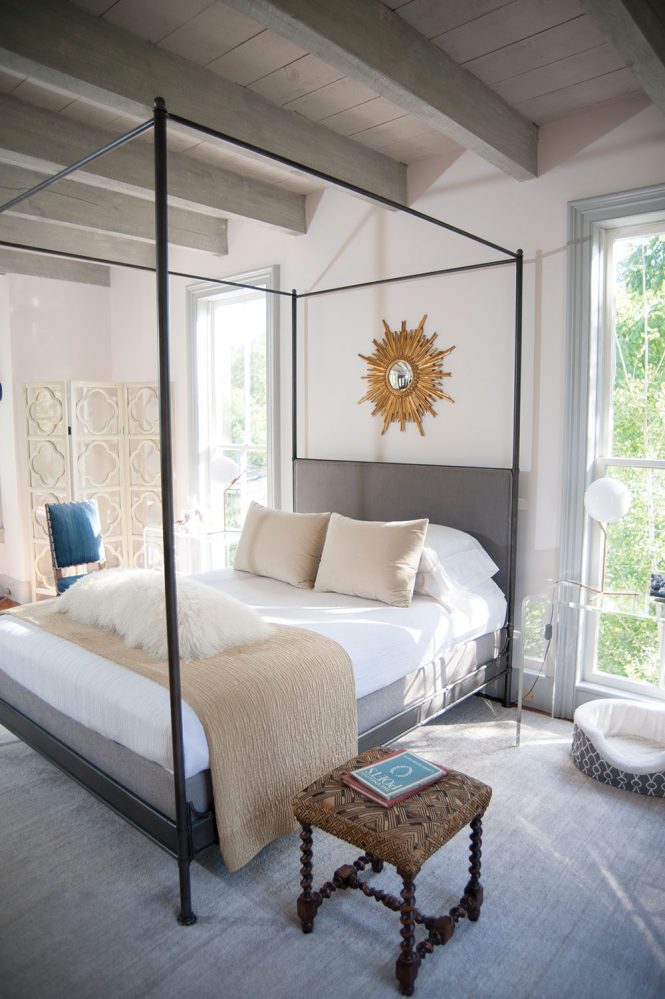 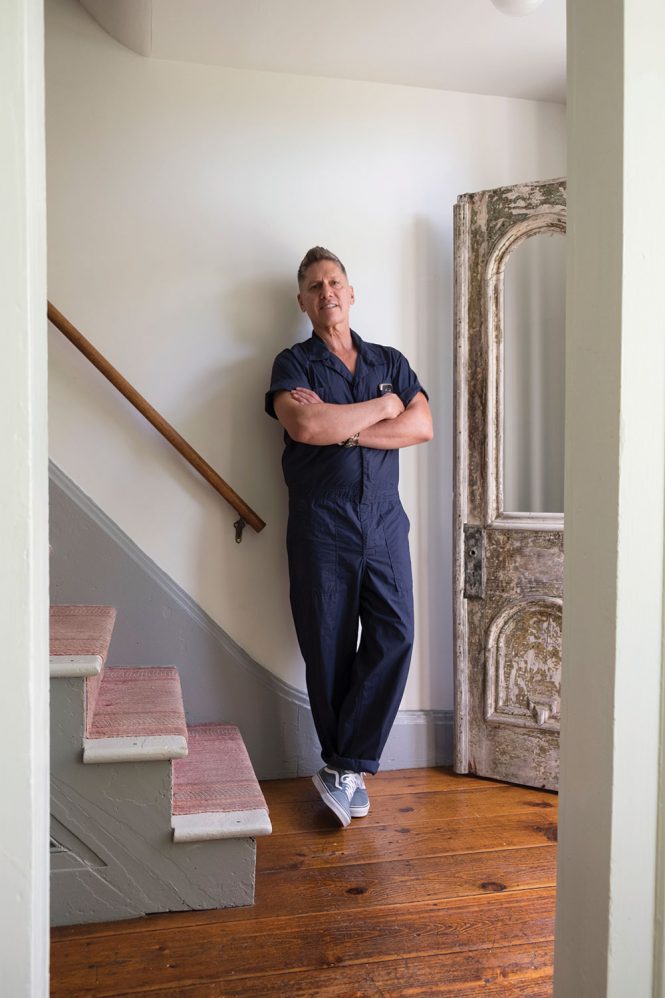 Salazar in the house’s original entryway, which faces the Hudson River. Photo by Roy Gumpel.

“When people ask me to describe the house, I tell them it’s like if Tuscany and Provence had a baby in America,” says Salazar, who grew up in New Mexico and studied at the Art Institute of Colorado before moving to New York in 1986—first to Greenwich Village, then to Williamsburg—where he was mentored by the legendary interior designer Melvin Dwork and ultimately launched his own firm, Studiosalazar LLC, in 2000.

Reflecting Salazar’s diverse tastes—“anything from the Renaissance right up to yesterday”—the rambling abode is filled with the eclectic collection of art that he began amassing at age 13, when he lacquered a hand-me-down wooden parson’s bedroom suite and sewed his own bed cover and curtains from fabric he found at a thrift shop, adding acid-green, crushed-velvet pillows he bought from a garage sale. “It was the early ’70s, you know,” he says with a laugh. “My first job, and I felt so accomplished and wildly chic. I still get that feeling when I complete a job today. I collect out of passion—always have, always will. If I can afford it, I buy it; if not, I don’t, and let it go. There is always more beauty on the horizon.” 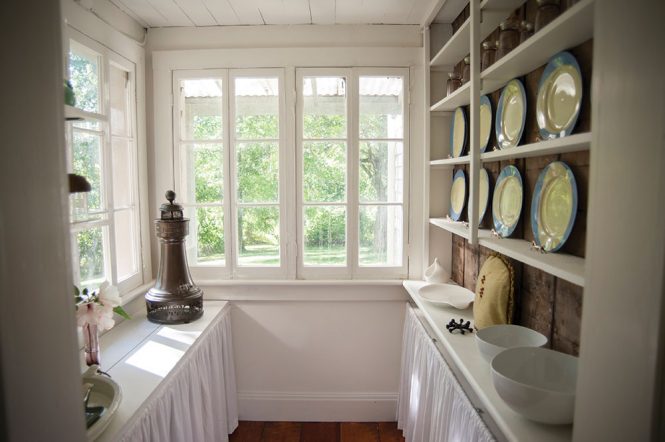 The addition features a nook used for storing dinnerware. Photo by Roy Gumpel.

Complementing both the art and the architecture itself is an assortment of furniture that runs from country primitive to sleek contemporary, the latter of which includes waterfall coffee tables—a trademark of Salazar’s designs for New York City clients. A pair of them, cast in Lucite, is placed in front of the French windows on either side of his bed in the master suite, allowing for unobstructed views of the rolling property, which includes an outbuilding once used as a woodworking shop. “Why just set up a country house as a country house [in style]?” asks Salazar. “To me, that’s really boring.”

What’s not boring to Salazar is the region he now calls home. “Before I found this place, I was staying at a friend’s across the river in Shokan,” he says. “That’s when I really started exploring the Hudson Valley, which reminds me of Colorado, and also Vermont, where I vacationed when I lived in the city. I love to entertain, and when I have guests up from Brooklyn, they’re blown away when I make them a country breakfast with eggs from the farm right down the road and fresh-baked bread from Bonfiglio & Bread, which is just over the bridge in Athens.”

For the expatriate Southwesterner, life in the Hudson Valley is as enchanting as the regal home he stewards—and as unexpected as his discovery of the house itself.

“One of the things Melvin Dwork told me was to always be open to accidents,” says Salazar, with a nod toward his pet Yorkie, Mr. Wesley. “Sometimes accidents can turn out to be your best friends.” 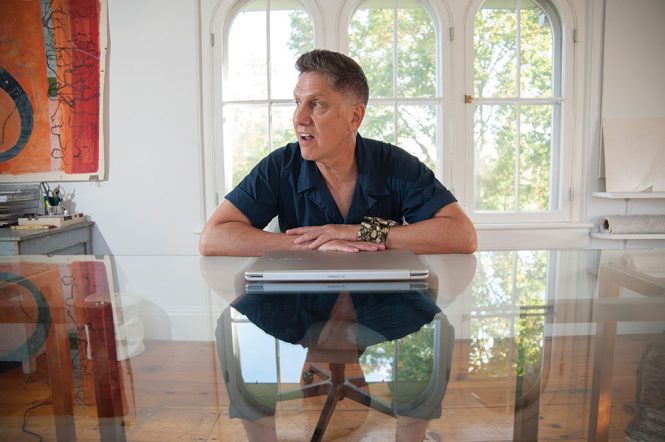 Salazar in his studio. Photo by Roy Gumpel. 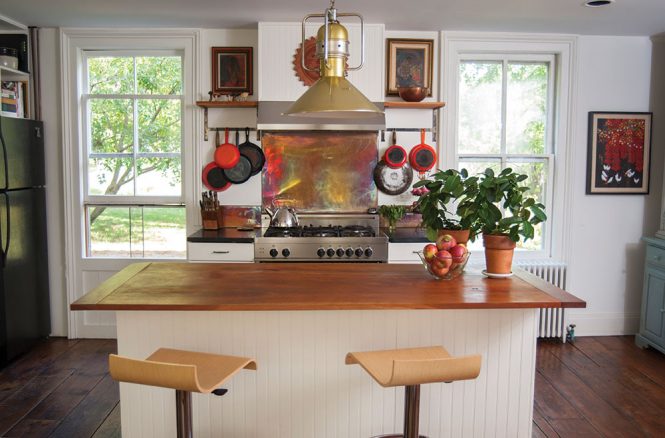 An island anchors the kitchen. Photo by Roy Gumpel.