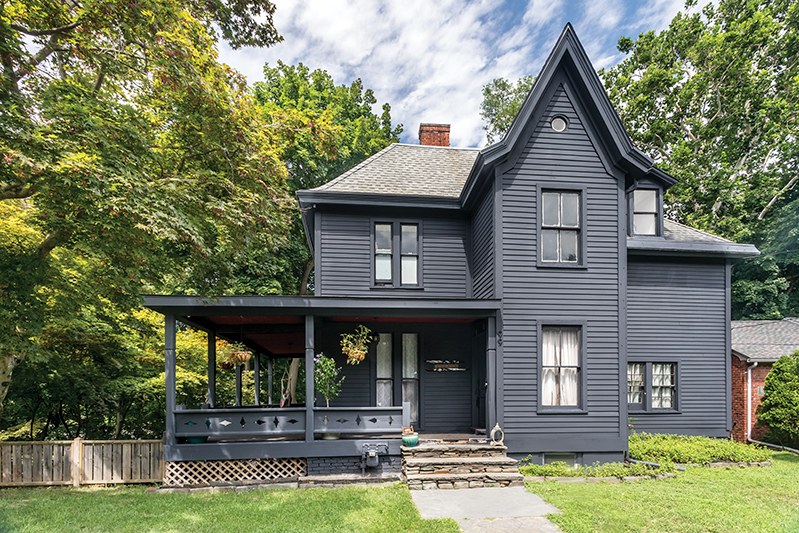 Was it a preternatural eye for hidden treasure that led Aaron and Sari Ruff to discover their historic home on Kingston’s mansion row? In 2011, after a long housesitting stint in the Berkshires, the two decided to permanently exchange city living for the Hudson Valley’s more relaxed pace. At first, they searched for a rental in both Catskill and Kingston but nothing appealed to them. Then their real estate agent suggested they take a look at a rambling 3,400-square-foot, three-story house that had been sitting vacant for four years.

“The first thing that struck me was all the natural light,” Aaron remembers of that first viewing. “I loved the different angles and curves of the various spaces and that none of the floors were on the same plane—it wasn’t a box.” Both Ruffs have a background in photography and each have professions that in some way or another cultivate beauty. Sari worked for multiple years with an artist’s foundation and Aaron owns the construction company Stalwart Groupe. It isn’t surprising that the two could see past the home’s ramshackle quality to its past—and its future potential. “I could tell it used to be very beautiful and had been really cared for at some point,” Aaron says. “I felt like it just deserved to have its glory back.” 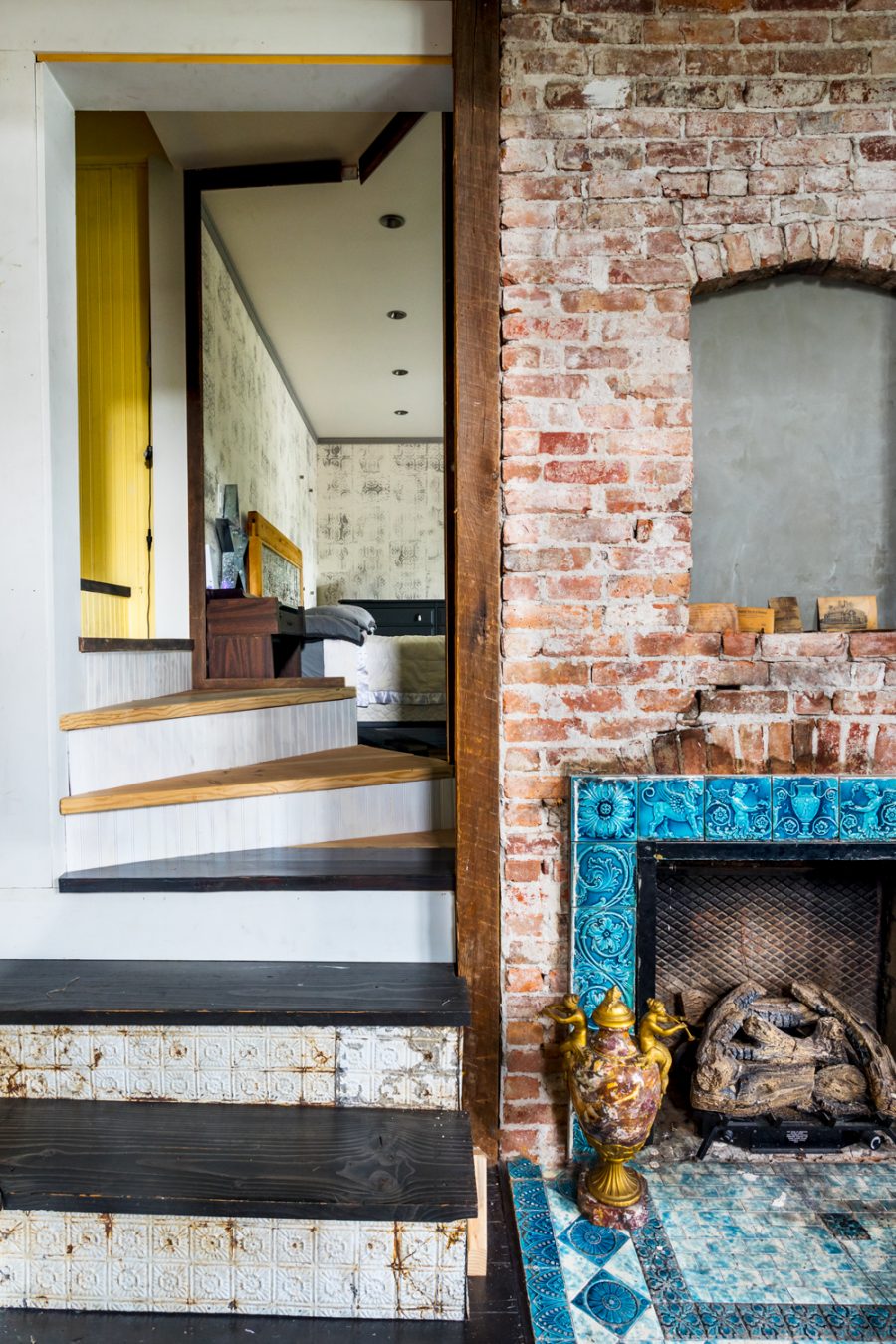 After this initial encounter, the two sat in their car discussing the potential change in their plans. “We hadn’t really been around Kingston,” says Sari. “And we knew nothing about the neighborhood.” As they sat there, a local walking down the street with a book under his arm stopped to chat. They explained their dilemma, and the friendly neighbor ended up taking them to dinner at a local restaurant. They were sold. “We basically bought in Kingston sight unseen,” says Sari. “But after that, we were game. We’ve been here ever since.” 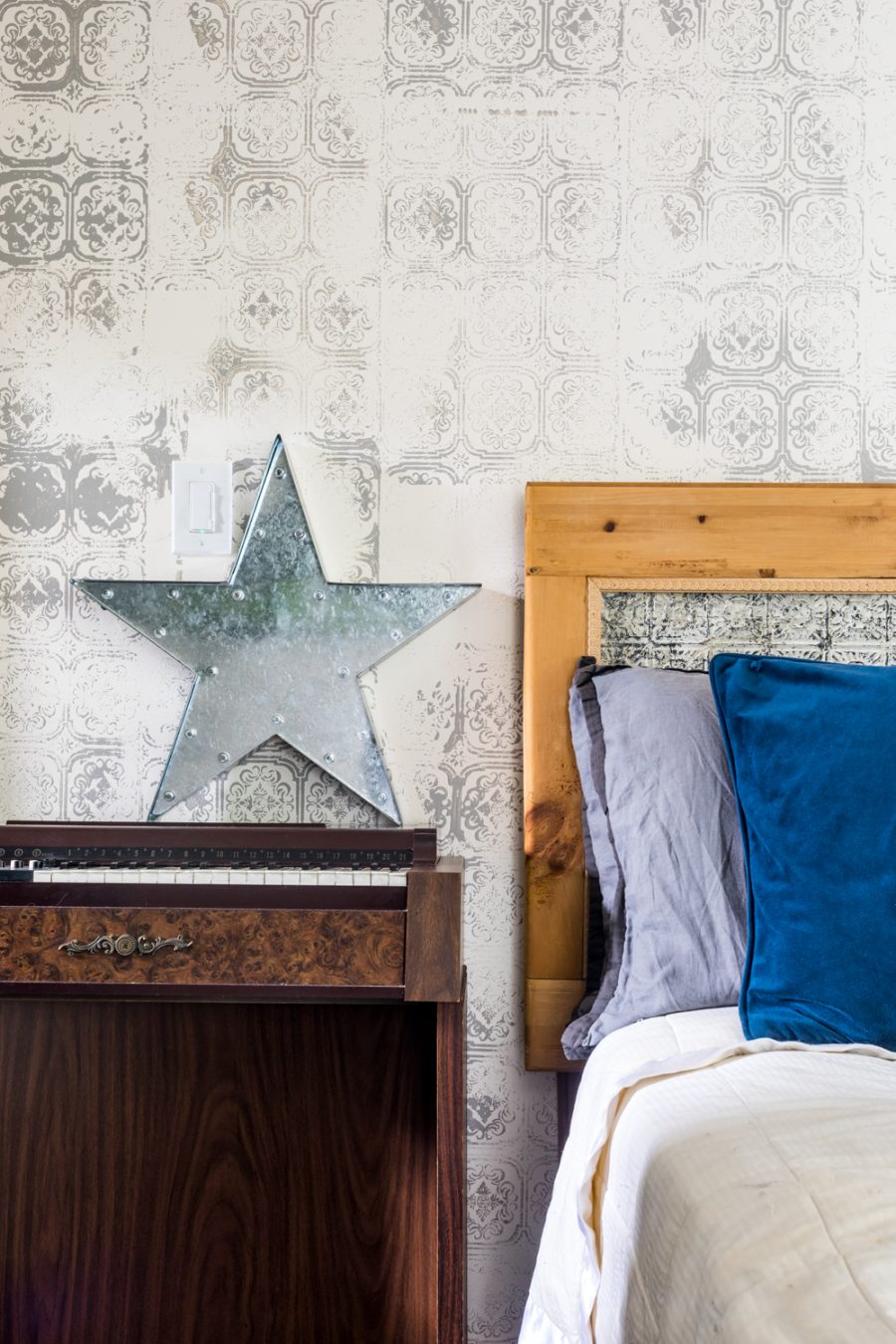 The Ruff family (which welcomed a son soon after moving in) hadn’t just stumbled onto a beauty in the rough, they’d found a distinctive slice of local history. Built in the mid-19th century, the home’s original two-story structure was the first-floor lodging and second-story painting studio of Hudson River School artist Jervis McEntee. Designed by his brother-in-law Calvert Vaux, who also collaborated with Frederick Law Olmsted on New York’s Central Park, the studio was the Upstate workspace for the Kingston-born McEntee, who was known for his moody landscape paintings of the Catskills. In 1899, the studio building was purchased and moved from its original Rondout location to West Chestnut Street where subsequent owners built up and around it to create what is now a four-bedroom, two-bath, Gothic Revival masterpiece. Although the home had some beautiful bones, the Ruffs, who did all the renovations themselves, had their work cut out for them to bring it back to its original splendor. 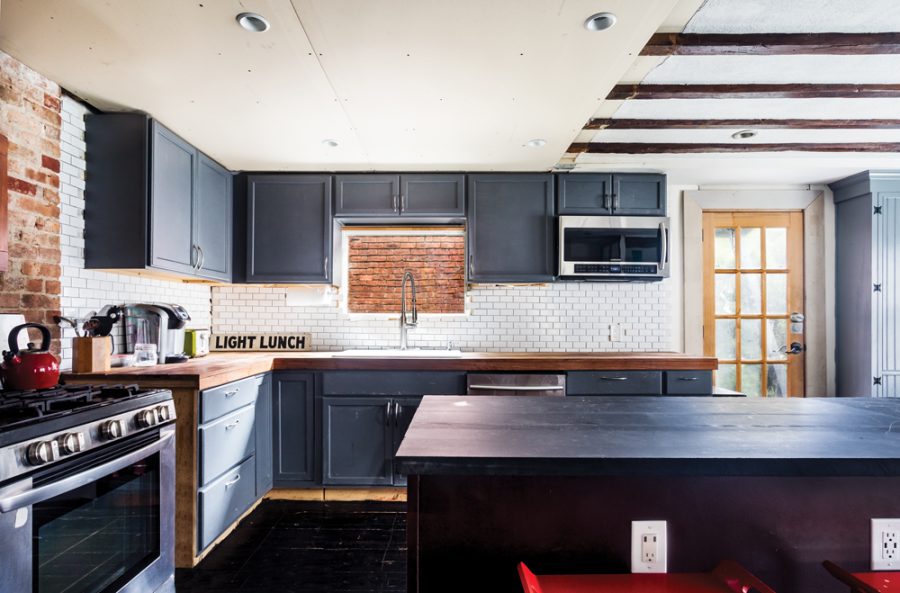 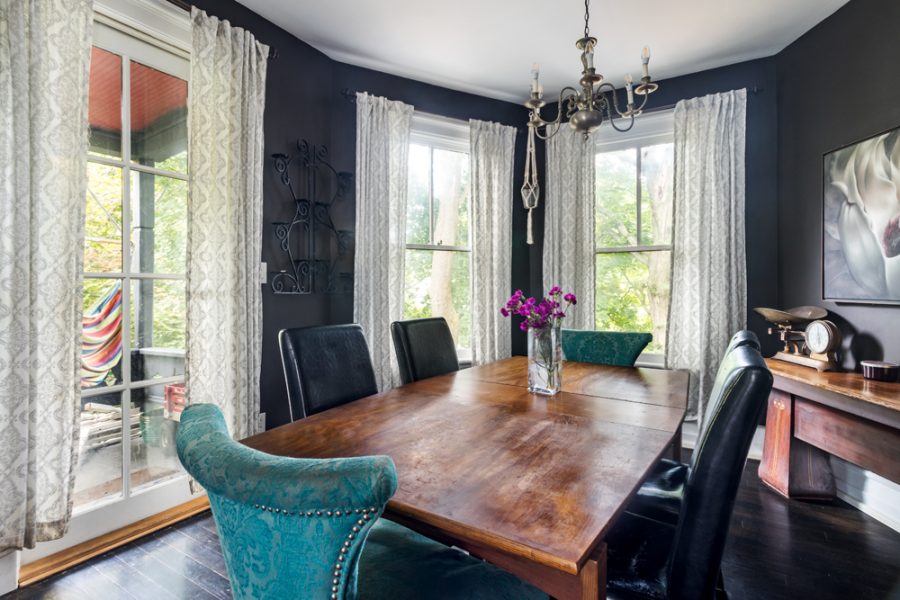 Sitting on a quarter-acre lot, the home is entered via a bluestone walkway and features a raised covered porch. The Ruffs restored the original decorative cornices and square pillars lining the front entrance hall, which also features marble tiled floors. To keep the interiors authentic, the Ruffs “reused as much of the existing trim work as possible and then recreated it when necessary,” explains Sari.

From the entrance hall, the home naturally flows around an uncovered central brick chimney, through corniced archways to a living room, dining area, and hallway with access to the kitchen and an office space, separated by a pocket door. The floors downstairs needed to be completely replaced, so the Ruffs used the opportunity to add radiant floor heating and then finished the pine floorboards to match the original wide-plank Douglas fir floors in the rest of the house. To accent the home’s antique flair, they added an eclectic array of chandeliers both downstairs and upstairs, which they found at nearby Zaborski’s Emporium.

Directly below the art studio, the home’s kitchen retained the original floors, which were salvageable, but the rest of the space needed a complete update. The Ruffs added new stainless steel appliances and a white-tiled backsplash, as well as gray-painted, wooden cabinetry. New butcher block countertops complement an antique slate-topped island in the center of the room. The Ruffs painted the remaining walls white but kept the original wood window and door frames, beams, and trim, and left an exposed brick wall behind the stove. The adjacent downstairs bathroom features a freestanding tub and original exposed wood and brick walls. 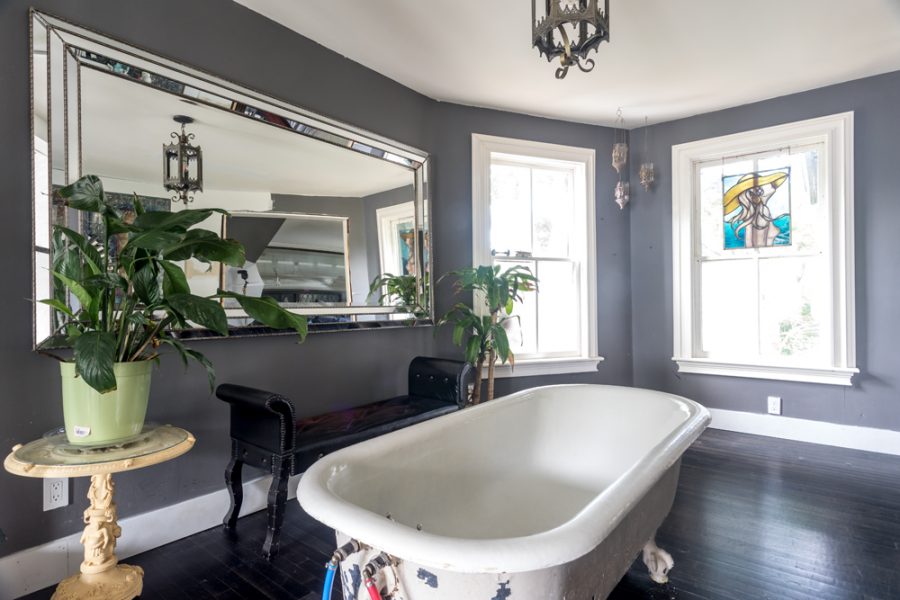 A fully rebuilt pine staircase leads from the front hallway to the second-floor landing. Currently, the space houses a large aquarium brimming with colorful tropical fish. From the second-floor landing, steps lead down to Jervis McEntee’s studio. The double-height studio retains the original vaulted, exposed wood beam ceilings designed by Vaux, as well as the original floor boards and a blue-and-white-tiled fireplace. Multiple windows wash the space in natural light. Sari added two wrought-iron chandeliers—hand-me-downs from her aunt—to the space and a wall of blue painted bookshelves are filled with the family’s collection of books and personal memorabilia. 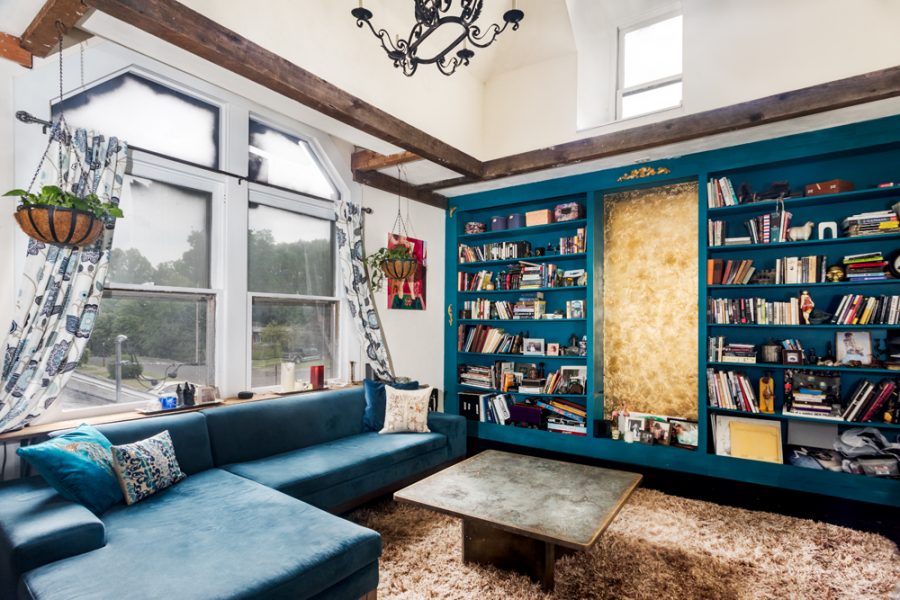 Like the kitchen, the upstairs master bedroom and bathroom also required a complete remodel. Here, the Ruffs completely replaced the floors, adding radiant heat as they’d done downstairs, and removed multiple interior walls to create one huge space that flows from the second-floor landing to the street-facing front window. At the back of the master suite, the bedroom features many of the eclectic creative touches that signify their blended personal style. “I love finding little things that have their own character and story,” says Aaron. The couple rescued iron inlaid windows from a nearby construction site, transforming them into a headboard for their bed and added two rescued non-working radiators as bedside tables.

Through a carved, corniced archway, the master suite’s central space was repurposed as an open bathroom. The Ruffs added a freestanding tub to its center and then utilized storm windows rescued from another construction site to create a separate shower stall in the corner. At the back of the suite, along the street-facing wall, an open, fully modernized walk-in closet abounds with space and has a washer-dryer. An additional second-floor bedroom features wallpaper handprinted to match the home’s occasional tin ceilings and walls. 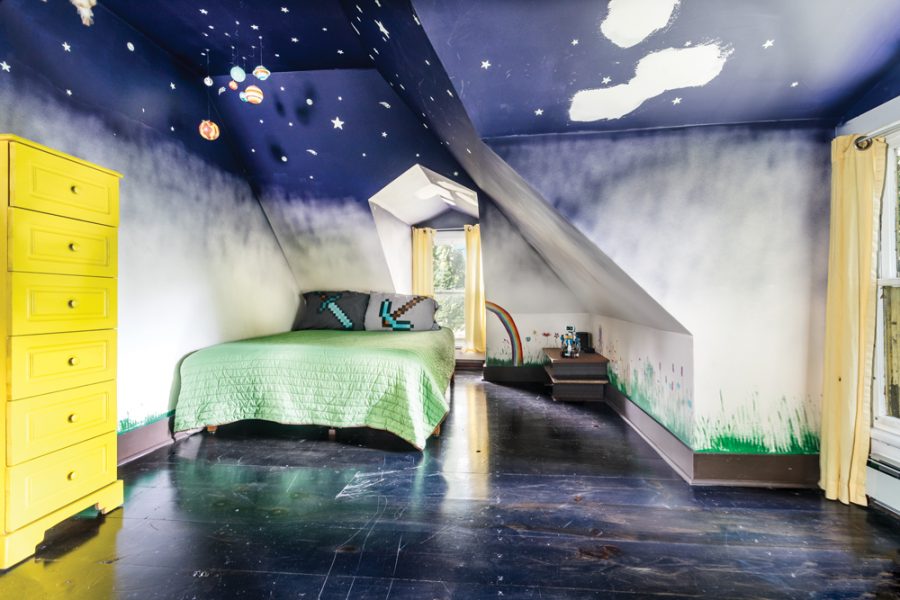 Off the third-floor landing, the home’s former attic has been fully converted to their son’s hideaway bedroom. Painting the low vaulted ceilings to mimic the night sky, the Ruffs were also able to accentuate the angular cut-outs, ceiling pitch, and beams of the ample, rambling sleep/play room. The dormer windows on all four sides provide expansive views of the yard, as well as the friendly neighborhood that first drew the Ruffs here. While they are sad to leave their diamond, no longer in the rough, the home’s remodel has given both a taste for bringing houses back to past glory. “We both love the feeling of having accomplished something like this,” explains Sari, who after this experience has a new penchant for designing interiors. Aaron has transitioned his city-based construction company to being fully Upstate, and now helps Hudson Valley homeowners restore their own finds. He’s happy with the project as well. “We were able to create a modern living space without destroying the home’s beauty. It’s a mix of old and new, but it still has character. You can still really feel the history.”

This unique gem, designed by famed Central Park architect Calvert Vaux, sits atop one of the most coveted streets in Kingston. Rescued and reimagined by its current owners, this sensational four-bedroom, two-bathrrom home is an exquisite sanctuary that combines rich original details and modern luxuries, with a charming apartment at ground level that’s perfect for Airbnb or a full-time resident. Large windows and high ceilings allow in tons of natural light. One of the major wow factors of this home is the second-floor den. This portion of the home was originally the studio of Hudson River School artist Jervis McEntee. The structure was relocated intact from nearby to serve as an addition to this home at construction. It is amazing to see this space, which retains its original character, where the renowned artist created many masterpieces. The angles and light of this one-of-a-kind property are delightful. There is also a great bonus space, currently being used as a home gym, but which could also lend itself to many other possibilities. The yard offers a slice of privacy, with a gated driveway; and there are raised garden beds and walkways made of Hutton brick. A Kingston classic!