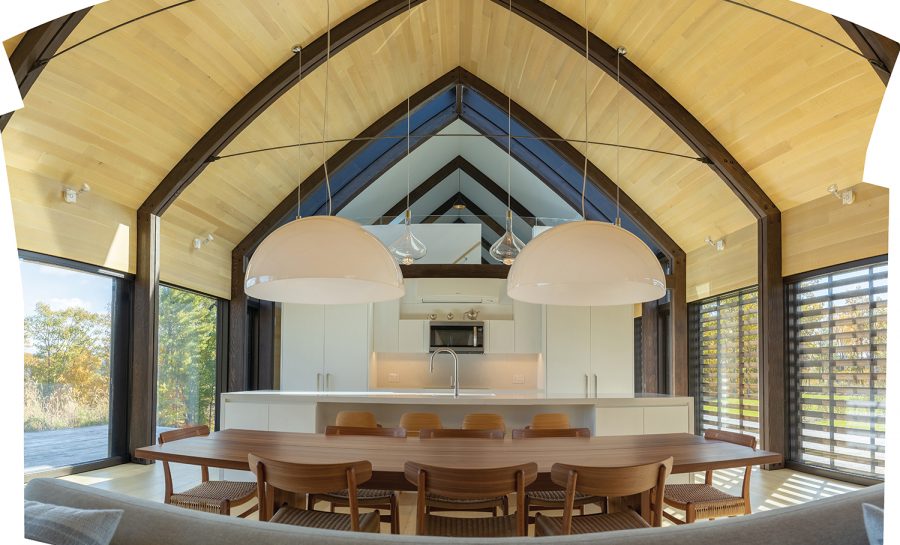 Architect Ben Albury, founder and principal of Amalgam Studio in Manhattan, says the clients, a New York City couple who work in the finance industry, wanted a weekend house in the Hudson Valley. The original idea of the husband—who, like Albury, is an Australian native—and the wife—who is expecting their first child—was to reclaim an antique barn, providing room for their family to grow. 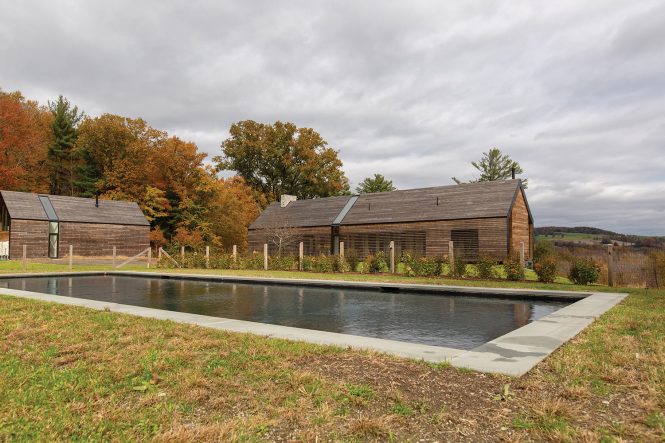 The house includes a pool and, in future, the couple may add a pool house.

“Everyone loves a good barn,” Albury says. “There are factories upstate where all these old barns have been pulled apart and put into piles with every plank numbered, so they’re like jigsaw puzzles.” But due to the expense and complexity of rehabbing an antique barn, the couple “came around to this idea of creating a modern barn,” Albury says, “replicating the form, the materials, and making it contextual for the rural, agricultural location and the feel of the landscape.”

“Everyone loves a good barn.”

They also wanted the barn-inspired home to be “modern, energy-efficient, and contemporary,” he adds. That meant meeting passive-house standards. “You create almost an air-tight seal,” Albury says. “All of the windows, gaps, doors, and skylights are tight. It’s like you’re living in a Thermos flask.”

The clients’ chosen property was 120 acres, which the previous owner had used as a gravel quarry, featuring a few crumbling stone walls, an old bridge, what Albury calls “a beautiful, class-A trout stream,” and a mountaintop. They dubbed the property Silvernails after a defunct railway station nearby.

“There’s a lot of history in the area, lots of farmland. But there’s also this sort of natural wild beauty to the second-growth forest.”

“There’s a lot of history in the area, lots of farmland,” Albury explains. “But there’s also this sort of natural wild beauty to the second-growth forest.”

Situating the house was easy. “It was like, ‘Go with the view,’” says Albury. “There was almost a plateau down a little bit from the mountain, so it’s got a view northwards of the mountains and then south to an open field.” The siting was also key for accessing solar power and creating two decks—a cozy, northern one looking toward the mountain and a full-length southern one opening to the pool and garden. 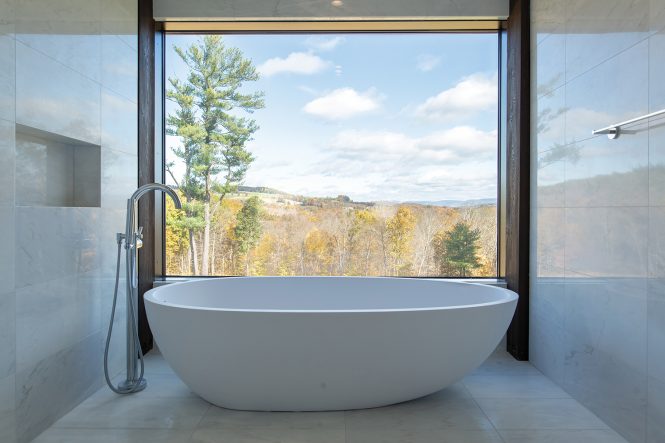 The design began with a 17th-century gable barn shape, chosen for its compatibility with cathedral ceilings and loft spaces. “Basically everything came from that,” Albury says, including exposing the building’s bones. “I loved seeing the structure being honest with how the building is made, how the building is held up.” It was a “lovely moment” when he and the contractors finished building the timber frame: “It was literally like the olden times, when they would raise a barn. The entire framework of the house was put up in about four hours.” The builder and structural engineer used a crane and modern technology. But they also “talked about how, traditionally, things were done. For me, not being a local, not even being from America, this was all very interesting and new. We wanted to be mindful of context and history, and creating something that belongs to that place, that space, that farm.”

Another design challenge was technical. Because the mountainside spot is exposed to whipsawing extremes—from bright sun and melting humidity to tree-toppling winds, storms, and snow—moisture management is vital. The exterior’s siding and decking are Kebony brand plantation pine treated with a biobased liquid.

“We used a new material in a very old-school way to keep things as dry as possible,” Albury says. “Kebony behaves like a hardwood, so it’s very durable. It’s very dense, and it doesn’t warp and buckle and move like traditional softwood would in the environment upstate.” The wood forms part of a rainscreen—a waterproof membrane and ventilation gap between the exterior siding and interior wall. 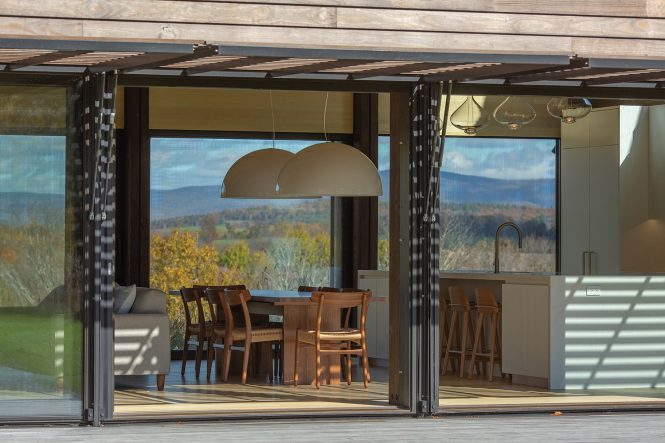 The architects incorporated the views into every step of the design.

The clients wanted to have an “oh wow moment” whenever they entered the house, whether from the front or back, says Albury, so he used a double-sided skylight, wrapping the roof, over eight-by-eight-foot sliding glass doors along two sides, sourced in Austria to meet passive-house standards. (In fact, the skylight is the first residential one in the US to meet passive-house standards.) The skylight and glass doors break the house into two zones: One wing holds the open space of the kitchen, dining, and living areas, while the other “is the more intimate, private [zone with] bedroom sleeping areas,” Albury says.

A floating-tread, white oak staircase divides the house there, too, allowing light from the skylight to filter all the way down to the basement, which contains game and media rooms and a guest suite, study, and wine cellar. Since the sliding doors are identical, neither side of the house is the “front”—on one side, the sliders lead to a stone patio off the garden and, on the other, a wooden deck. 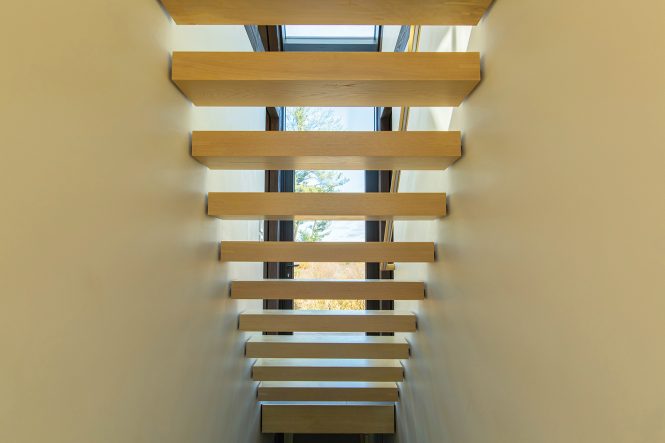 The stairs’ open treads and the window-walls’ pneumatic sun-shading slats bring light to the space.

The stairs’ open treads and the window-walls’ pneumatic sun-shading slats make the space “light, bright, and airy,” Albury says. “The play of light creates a poetic, artistic, almost romantic feel. Shadow play was important for the long galleria space, so you experience light and dark when moving through the corridor, especially on a sunny day.” Upstairs, the bright, white, minimalist loft space will function as a nursery or rumpus room. The couple likes to lie there and gaze at the stars, through additional skylights.

The house’s interior is fittingly barn-like—“white oak on the floor, walls, and ceiling linings,” Albury says. “Then, when you look at the basement, which sort of projects out from the hillside, you see that it’s stonework, which was similar to the traditional barns of the area.”

As in the 1600s, when Gallatin was founded, the wood species chosen for the house—white oak flooring, hickory vanities, and walnut cabinetry—come from native trees.

“Each level of the house has a different palette of colors, finishes, and materials,” says Albury. The main level is “light, but warm and feels natural, mostly the use of woods endemic to the property.” The decor is modern farmhouse, Albury says, with a mix of vintage Scandinavian furniture and pieces from Design Within Reach. 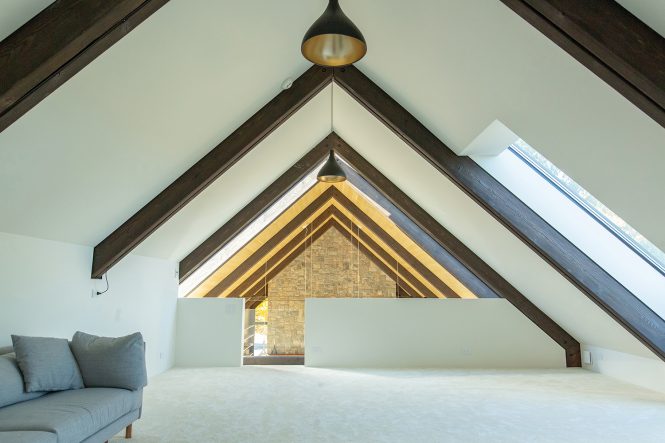 The traditional New England hearth is “the heart of the house” built from real stone.

The traditional New England hearth is “the heart of the house, so I wanted to use real stone,” says Albury. It is double-sided, dividing the open area from “a cozier space where you can retire with a glass of red wine and read a book.” The lighting and furniture throughout the house is a mix of Midcentury Nordic and minimalist modern.

The complex includes a carriage house below the main house (creating a courtyard) and a pool; in future, the couple may add a pool house. “Also, the carriage house could be a guest house down the track,” Albury says, “but at the moment it’s a three-car garage and workshop with a loft space above,” used as a music room—the owner plays guitar. It has a “modern treehouse” look, showcasing a collection of Japanese woodblock prints. 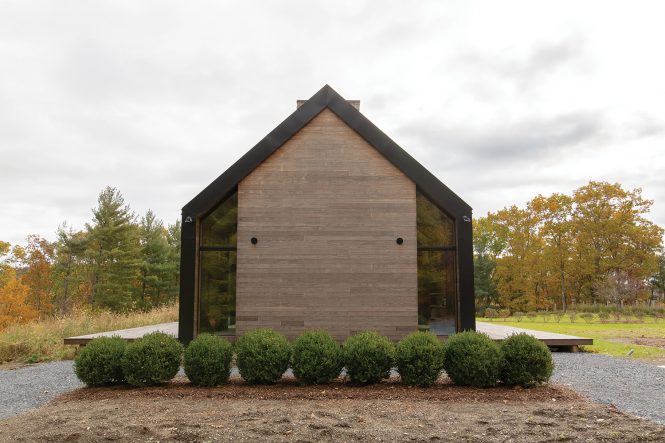 The house looks to mountains on one side.

The local slate Albury hoped to use turned out to be better for making “outdoor, crumbling walls” than for building. “It’s not so good to walk on as something that will last a hundred years,” Albury says. “[The client] was [thinking] about not only his own children, but his children’s children. He even talked about planting an apple orchard and learning to make cider.”

The house is entirely made of natural materials that, without maintenance, will last, and encourage imperfections. For example, its solid wood interior floorboards, which will “wear away and have that beautiful dip in certain areas,” he says. “Wood is wood. It’s not vinyl and it doesn’t always look perfect. We showed the knots. We showed the cracks. We were honest with the imperfections.”

This ethos deviates from standard, slick modern design. The house, however, is already a hit and was included among design blog Dezeen’s top 10 architectural projects of 2018. But for the clients, “It’s a real house,” says Albury. “They wanted to be able to come in with snowshoes and wet dogs and muddy feet. It wasn’t about, ‘Okay, we’re going to spend all this money on something that we’re never going to use and it’s going to be always beautiful, and we don’t get to touch anything.'”