Paul Iappini is the quintessential country gentleman. Now semi-retired, he is an accomplished cook and frequent host, pet parent, keen reader, lover of art, frequent traveler to France—and an avid gardener and lover of wildlife. He integrates his many passions at his 1920s-era vernacular Cape Cod house in Spencertown, in northern Columbia County. Iappini’s property is living proof that we can have the pleasures we seek (a comfortable home, a pool, pretty gardens, even organic food) while providing a healthy habitat for birds, bees, and butterflies.

Part of the joy of owning a country house is the creative outlet it offers. The other part is having the opportunity to escape from the quotidian. Iappini was seeking both when he came north from Manhattan 18 years ago, looking for a weekend getaway from his busy life as a clinical social worker and psychotherapist. (He retired last year as a director of assisted outpatient treatment in New York City.)

“I wanted beautiful land and to be in an area with farming,” Iappini says. “I found this part of Columbia County, especially Hillsdale and here in Spencertown, reminded me of the Dales region of England. It was beautiful. I looked at 12 houses in one day and chose this one, the last and most expensive.”

Iappini’s home is a quintessential vernacular Cape Cod, with a classic 45-degree, 12-on-12 pitched roof, shutters with bird cutouts, and a sturdy yet simple form—and all on a scant three acres of bucolic land. The property immediately reminded him of Cambridge, Massachusetts, where he grew up, and his family’s summer house on Cape Cod, Iappini says, and its history appealed to him. “The house had a vintage feel about it, like it hadn’t budged from the 1920s,” he says. “To me, it was an authentic farmhouse with some Shaker simplicity.” 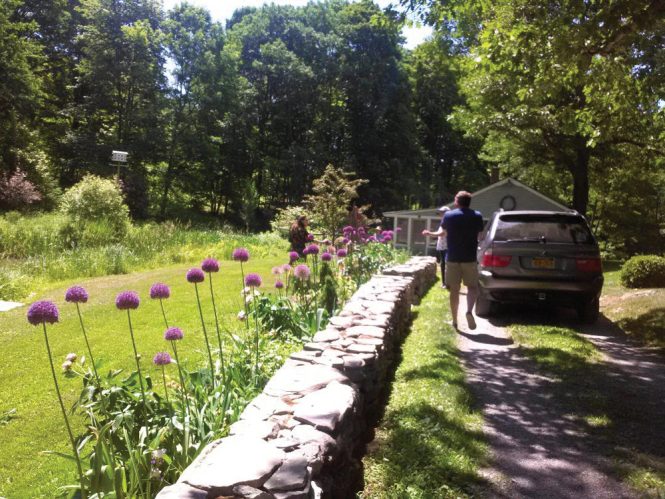 Paul Iappini and his husband, Kenneth Fox, show a neighbor around the backyard, where a recently built, antique-style stone fence delineates the English garden and pool area and keeps the couple’s dogs from bounding into the driveway.

Over the years, Iappini has honored the 1920s era throughout the house’s many updates by keeping things simple—almost humble—but always comfy and welcoming. “I’d finish one project and move on to the next,” he says. His biggest project, which took place 10 years ago, added a large library, an additional bedroom, an office and a bathroom onto the existing 1,400-square-foot house, nearly doubling its size.

To furnish the house, Iappini called on Vivian Kimmelman of Berkshire Home & Antiques, who found 1920s antiques and new upholstered pieces for him, and eventually became Iappini’s restoration resource for the house. Although other homeowners might have tossed out the old farmhouse windows and upgraded to new, Iappini saw value in restoring the originals, including their float glass, so Kimmelman rounded up workers to accomplish this.

A dyed-in-the-wool Francophile, Iappini travels to Paris several times a year. Many of the books, art, and objets d’art around his house, which he shares with his spouse, museum archivist Kenneth Fox, are French, including colorful tiles in the mudroom, kitchen, and bathrooms. Iappini and Fox count the 19th-century French artist Gustave Moreau, known for dramatic paintings biblical and mythological characters, as a key decor inspiration, along with painters Manet and Matisse, and macabre style (think: Edgar Allan Poe).

Despite these strong influences, the home isn’t showy or dramatic. The kitchen, with its open shelves, ironstone platters, and copper cookery, is straight out of the French countryside. The couple entertains there frequently, using their antique cookware with relish, knowing that an occasional nick or ding will only enhance the patina. 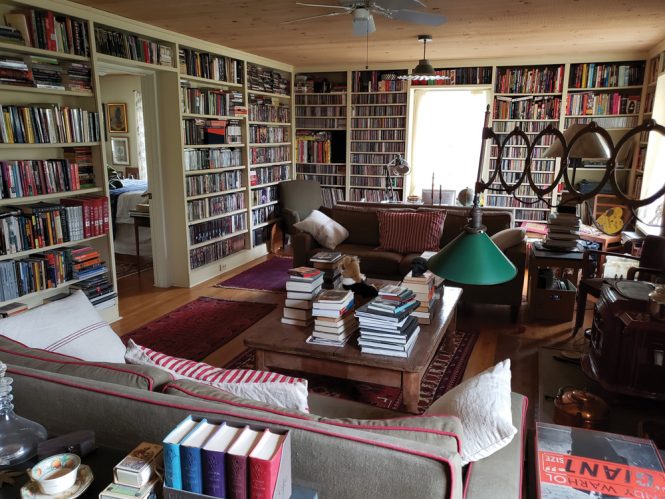 Iappini’s well-stocked library, with plenty of comfy seating areas and a wood-burning stove, is located in the house’s addition, built 10 years ago.

Some years, the calendar can be a little deceptive for gardeners. This spring, for instance, was colder than usual. Iappini was feeling antsy, hoping to get seeds sown and planted, so he decided to install a greenhouse. The result, built by Centerline Construction, is set on a bluestone foundation and framed in western redwood. Instead of glass, prismatic double-walled, polycarbonate sheeting is used to protect against harmful ultraviolet light that can burn plants. This material insulates better than glass, too, and its strength and lighter weight mean that it won’t break easily. Hence, the greenhouse is located under trees, another intentional decision by Iappini, who plans to use it for starting seeds from February through May. By the time the trees overhead leaf out and block the sun, the seedlings will be securely planted in garden beds.

Like any gardener, Iappini says he’s made his share of mistakes, but he chalks them up to the learning curve and the need for gardeners to experiment. For years he has used the “lasagna” technique to prep his garden beds: layering newspaper with compost and mulch. Done right, he says, it nourishes new plants and inhibits weeds.

This summer Iappini plans to continue developing a wildlife trail that’s been in the works for several years. It’s an area of meadow beyond the pond that he’s made into a haven for wildlife. With the help of Copake landscaper Ricardo “Tito” Lainez, the area’s far horizon has been planted with maples, dogwood, exfoliating river bark birch, various fir, spruce, and other evergreens, along with crabapple, gooseberry, and Anjou and Bartlett pear trees. 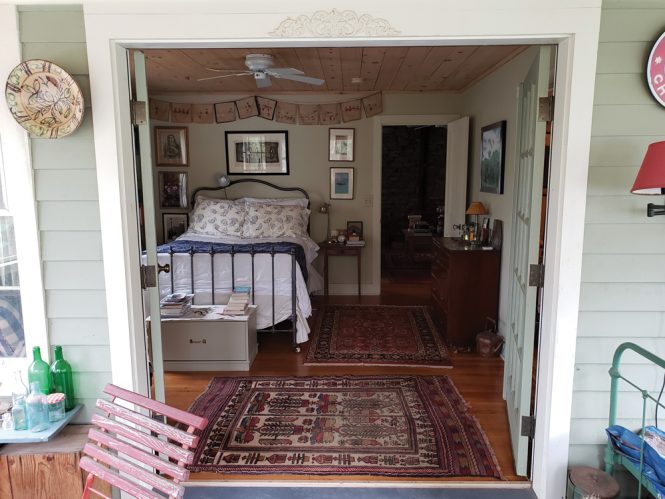 A guest room at the top of the addition opens onto a charming porch area.

“These are trees and shrubs that interest me and they’re good for wildlife,” Iappini says. “The crabapple attracts Baltimore Orioles, for instance.” At the far end of the trail, he has installed butterfly houses, bat houses, and—new this season—a mason bee house. The trail, a riot of color for most of the growing season, is wilder and more natural than the rest of the property, but no less deliberate. Iappini has planted both high plants (peony) and low ones (Joe Pye weed loved by butterflies), as well as other plants chosen for their role in the ecosystem.

The nearby pond is loaded with turtles and frogs, and thick cattails that red-winged blackbirds love. Native Marsh Marigolds bloom during spring, along with snowdrops. Iappini has planted swathes of wild hyacinth and snakeshead fritillary, along with early-spring snowflake and Spanish bluebells that will spread in the coming years. In late summer, bee balm, echinacea, and rose campion take center stage. Something blooms along the trail from March through October, and chances are it’s something needed by the birds, bees, and butterflies.

Some years back, Iappini and Fox added a pool at the back of the property, and converted a side room in the garage into a changing room for guests. The tall, thick pool gardens eventually came to resemble Monet’s Giverny. “You had to brush back phlox and hollyhocks to reach the water!” Iappini says. Last year, he updated the pool area with the help of garden designer Marilyn Webb. They recemented the patio stone and expanded the sunbathing area by scaling back the number and type of plants to include structural perennials and sure-bet shrubbery like hydrangea paniculata. Raised beds devoted to herbs and vegetables take up the sunniest section, and are watered automatically via drip lines buried just beneath the ground’s surface. 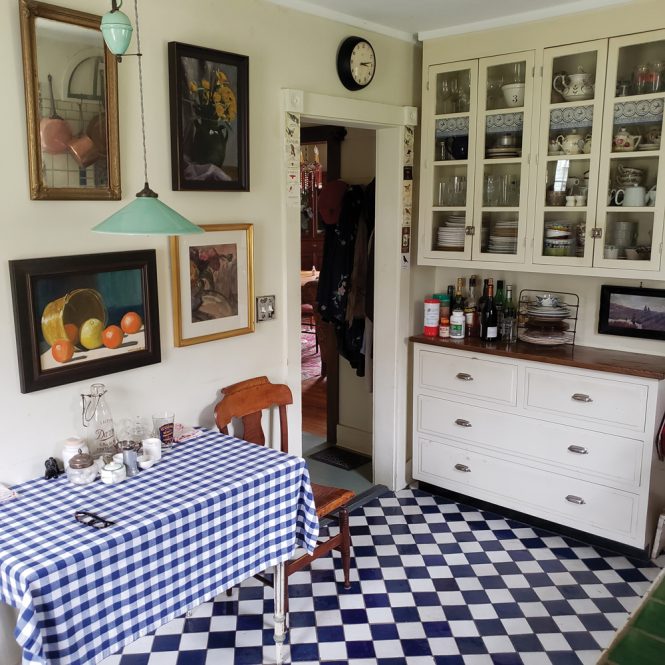 A 140-foot-long stone wall, built by Centerline, is a recent addition, but looks like it’s always been on the property. The wall helps define the backyard and lets Earl and April, the couple’s two Corgis, play without being tempted to run into the driveway.

The stone wall garden is a nod to classic English style (think: Christopher Lloyd’s Great Dixter Estate and Gardens in England’s East Sussex). It’s the most formal garden on the property, employing repetition of form and plant material, including Dwarf Alberta spruce clipped into topiaries, allium, foxglove, lupine, dahlia, and delphinium. From April’s first bulb blooms through October’s chrysanthemums, there are always flowers beckoning the visitor to enter Iappini’s gardens.