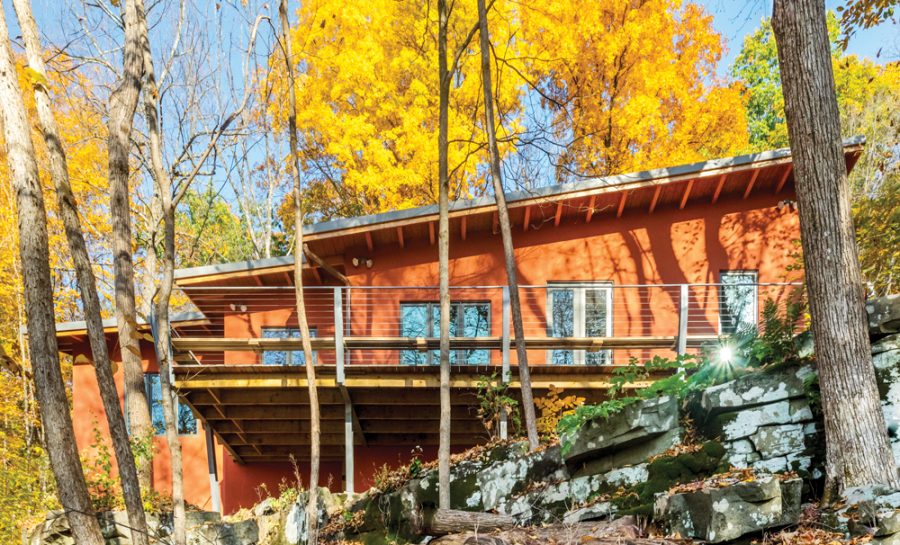 Tucked away in Ulster Park near the confluence of the Wallkill River and the Rondout Creek, furniture maker and sculptor Rob Hare and his wife, children’s book author and illustrator Iza Trapani, dwell in their contemporary, Tuscan-inspired house that Hare designed and built from scratch.

When they married in ’97, Hare had been living in Kingston, and Trapani in New Paltz, but they wanted to stay in close proximity to friends, so they looked into purchasing a home located in between the two. After real estate agents couldn’t help them find homes they were interested in, they decided to knock on doors. While driving toward Kingston, Hare realized a long driveway that he’d seen for years led to a house sitting on property he and Trapani admired. “Once I screwed up enough courage to drive down that long driveway, the caretaker at that time said, ‘Oh, yeah. The whole place is for sale; the owners just put it on the market,’ and it hadn’t even been advertised. So we bought it.” 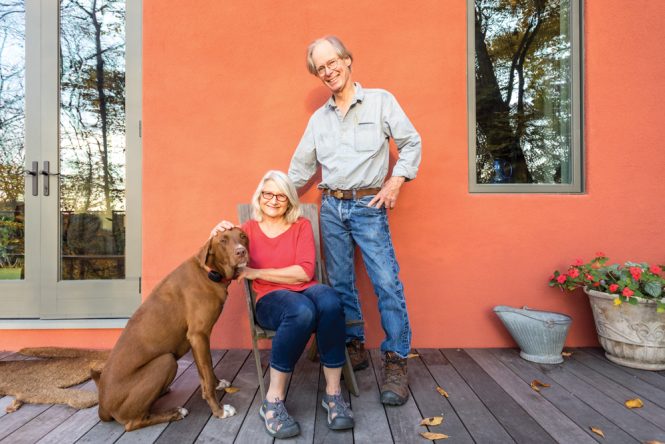 Hare and Trapani on the deck with their Lab/pit bull mix, Nugget.

The 150-acre farm came with two houses, which they planned to rent out, and a large barn. They eventually built Hare’s furniture-making studio near the road and the 3,000-square-foot Tuscan farmhouse (sold in 2016) that their new home was modeled after.

When designing the new house, Hare and Trapani decided to downsize but keep the features each of them enjoyed about their old home. They also wanted to ensure it was conducive to aging, with just one floor.

“The old house was very spacious,” says Hare. “It had a living room, dining room, and peaked ceilings that were 26 feet off the floor, so it was a big open space. We both wanted a house that felt warmer and not quite as grandiose.” 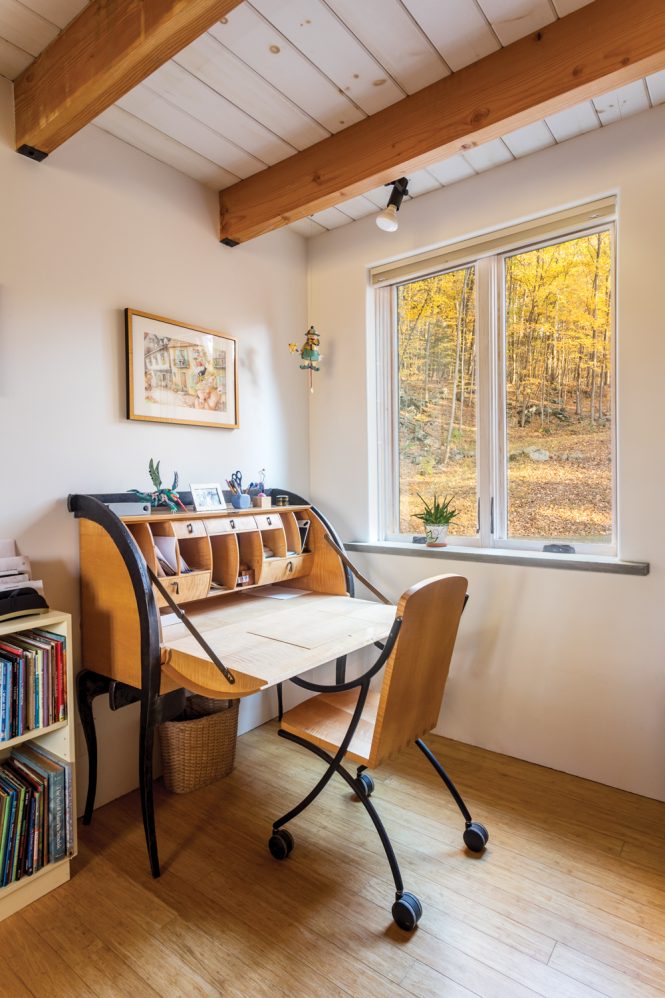 A chair and desk Hare designed and built that Trapani uses as a spot to to draft her children’s books. The desk has an inlay where Trapani’s computer fits snugly, and the front portion folds up and into itself when not in use. Like much of Hare’s furniture design, the desk features a sculptural metalwork frame.

This staircase, leading to a well-lit attic, is hidden in the ceiling of Trapani’s studio and accessed by pressing a button on the wall. “I didn’t want to take up the space for a permanent set of stairs,” says Hare. “Most attic staircases are rickety, and they’re ugly, so I built a set of stairs that hinge from the attic floor and drop down, lifted and lowered by an overhead electric cable.”

After considering several roof designs, Hare settled on a hyperbolic paraboloid, a geometric form composed of a series of straight lines that shift across the surface of the roof and look triangular, giving the home a contemporary, asymmetric facade.

“When I walk down to the house from my studio, I see the roof, and it’s just a lot of fun,” says Hare, whose quirky designs are repeated often throughout the home. The front door, for example—a frame-and-panel arrangement that resembles a ladder with staggered rungs going up either side—has a twisted and angled look similar to the roof and opens up into a welcoming intersection marked by four curved corners brightly illuminated by a skylight. There is a lot of twisting, too, in the ceiling’s wood beams that adjust angles along the slope of the roof (exposed rafters made of Douglas fir that are anchored to six-inch tongue-and-groove pine planks), and in the aluminum door handles and drawer pulls that Hare hand-forged. 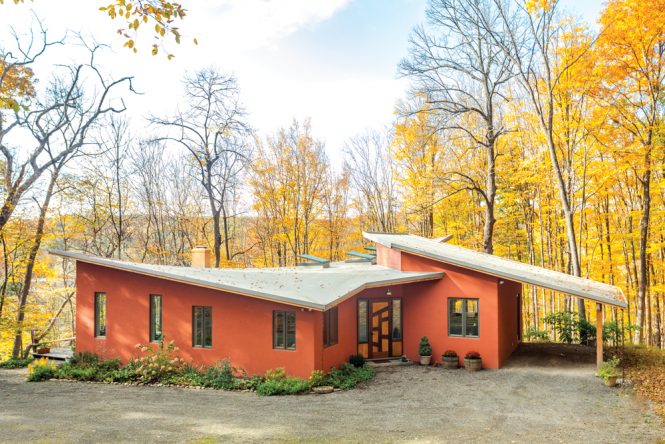 After considering several roof designs, Hare settled on a hyperbolic paraboloid, a series of straight lines that shift across the surface of the roof, giving the home an asymmetric facade.

“I had picked up a bunch of handles at surplus places, and there were some we really liked but couldn’t find anymore. I figured I could make them in aluminum, and I put a twist in the aluminum before I bent it into half of an ellipse. If you have two sets of drawers adjacent to one another, one set of handles twists to the left, and the other twists to the right,” he says, describing the unconventional, sculptural theme that characterizes much of his metalwork.

Since earning his master’s degree in sculpture from the University of Cincinnati, Hare, a self-proclaimed “maker of things,” has tried everything from sculpture and construction to furniture making and high-end millwork, but it was the furniture-making that he eventually settled into. All of his work is still based in sculpture, however, and his pieces typically feature a wood structure supported by metal framing, which he used to forge in steel but has since switched to aluminum.

It proved difficult to transition to the new material, initially, and took Hare years to figure out how to do it;:“I had to build a new furnace and learn some different techniques. To my knowledge, I’m the only one in the country who is hand-forging aluminum in this way.” The metal comes to Hare in two-foot, three-inch square chunks, and he heats, bends, and hammers the material until it’s drawn out long enough to be legs for a table or whatever else he needs for his projects. He can get the aluminum color to resemble steel now, too, through process of anodization, whereby the metal is treated to form a colorized coating—but in general, he finds aluminum easier to work with and much lighter and more manageable to transport than steel. 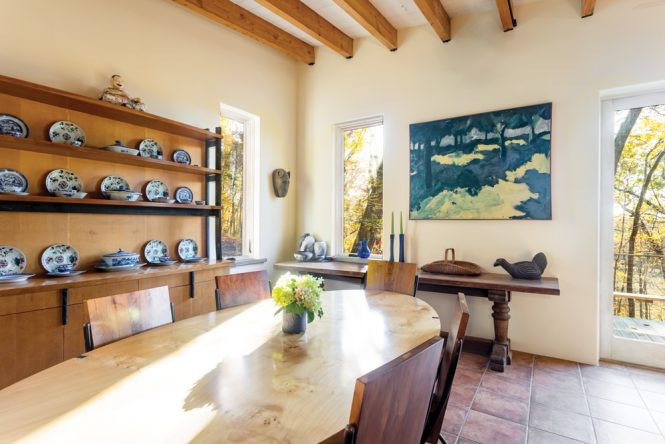 Hare built both the table and hutch in the couple’s dining room, while the long table along the wall was his grandmother’s. Hare appreciates when a piece of furniture is banged up a bit, saying, “I like seeing where people have used it, where it’s not just this fancy thing set aside. Tabletops, especially dining tables, are really thick. A little patina of use is nice, and you can always sand it down and refinish it.”

Working Out the Details

While Hare designed and built the home, including the majority of its furniture and all of the cabinetry and shelving, Trapani brought more detail to the space, especially when it came to color and functionality. “If I want to see how a wall will look, and the ceiling, and a certain corner, Rob will draw that for me three-dimensionally,” she explains. “That’s where my sculpture background comes in,” he adds. “I could draw the entire room freehand in perspective from her viewpoint and say, ‘Here is where we’re going to have the kitchen island. How big should it be? How much space do you need between the island and the counter?’ and I’ll adjust it according to what Iza sees as necessary.” 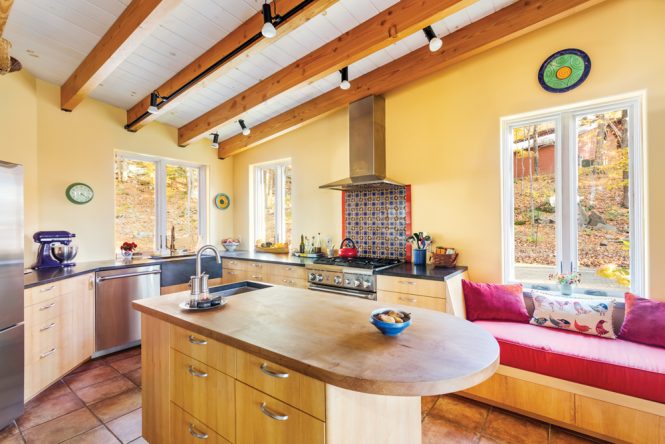 The kitchen is fairly open, and includes cabinetry and cabinet pulls made by Hare, who purposely left out the higher cabinets because Trapani is 5` 2”, so the height isn’t practical for use. There is also a walk-in pantry with shallow shelving that makes accessing all the glassware and pantry staples.

Trapani’s artistic eye for color and a sense of style is evident throughout, whether it’s in her choice of blue and yellow kitchen tiles for the stove’s backsplash; the warm, earth-toned wall colors; or the pottery, arranged in cheerful clusters of blue and green, that line the shelves near the sitting area in the kitchen—which is a fairly open room with a center island topped with a solid slab of maple and a doorless walk-in pantry with lots of shelving that neatly displays colored glassware, storage containers, and pots and pans.

Trapani’s favorite feature of the home, however, is her studio, where she writes and illustrates children’s books and is surrounded by copies of her award-winning work—including her rendition of old favorite The Itsy Bitsy Spider (Charlesbridge Publishing, 1993), which has sold over a million copies. With large windows overlooking the woods, the studio feels open and cozy at once, with a couch for lounging and a large desk that Hare built for her with several drawers and an inlay for her computer. 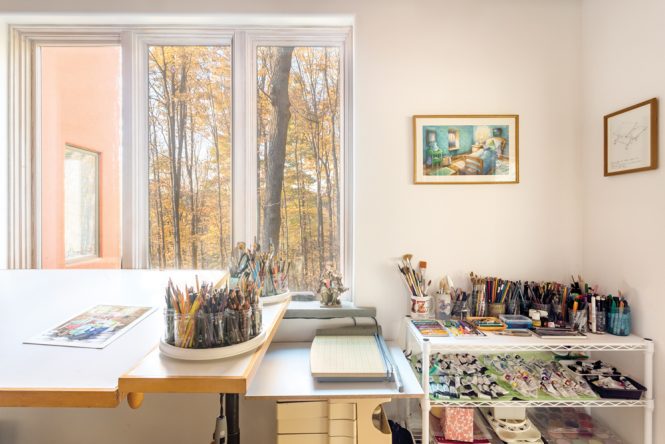 Trapani’s studio, where she writes and illustrates children’s books. Her take on the Itsy Bitsy Spider has sold over a million copies.

“I draw, and I do a lot of my writing in the studio,” she says. “But generally, I feel like I either need to be in a car or on a walk to get an idea for a story. I then dash home and flesh it out on the computer. Rob also built for me a beautiful drafting table, and I have a big bulletin board where, when I’m working on a book, I put all the illustrations up, and then between books, it’s filled with cards and memorabilia.”

Taking in the Results

Other than enjoying the well-lit and open studio with lots of storage, Trapani also loves the hidden staircase Hare built into the ceiling of the room. Upon pressing a button, the stairway descends on a heavy-duty electric cable. Hare didn’t like the idea of having stairs awkwardly intruding in Trapani’s otherwise spacious workspace, so he fashioned them to hinge from the attic floor and drop down when they need to access the room, which is a light-filled attic that stores her paintings, a sewing table, and other odds and ends.

In the bedroom, a large dresser Hare built with metal pulls that look like one solid handle but splits in two (one half opening each of two drawers). The room also contains two antique chairs that were in Hare’s family and a painted Pennsylvania Dutch blanket chest.

Outdoors, a long deck spans the entire width of the house, where their sweet, obedient pit bull mix, Nugget, and aging gray cat, Sneak, wander in an out of the home freely. It’s here, too, that the couple can take in the woodland setting with natural ground cover, trees, and shrubs. They have a few plantings around and in the front of the house, like catmint, hydrangea, and viburnum—but the main goal for their new house design was to create an easy sense of warmth and welcome where they could both relax and enjoy their work.

After years of designing and building the home (alongside builder Bill Otis of Winter Sun Construction), they are both happy with the results. “I just plain love making things,” says Hare. “Whether it’s wood or metal or drafting or working out designs for clients or for Iza—the whole process is enjoyable for me. So, I go to work and come home, and I’m happy. Even if the bills can’t get paid—life is still pretty damn good.” 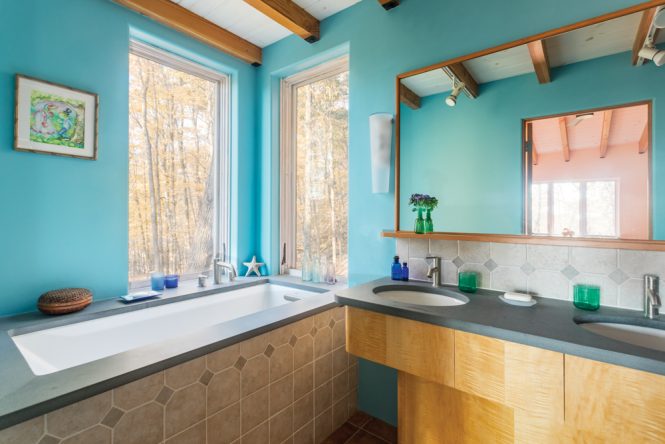 The master bath overlooks the woods, and has a large, deep square tub and walk-in shower. With cabinetry made by Hare and sea-themed colors chosen by Trapani, the space is just a small sampling of how the couple worked together to complete their home. “Rob is the one that is really fantastic at designing spaces,” says Trapani. “He does lean towards big, open spaces, and I always want to bring in anything to make them cozier.”