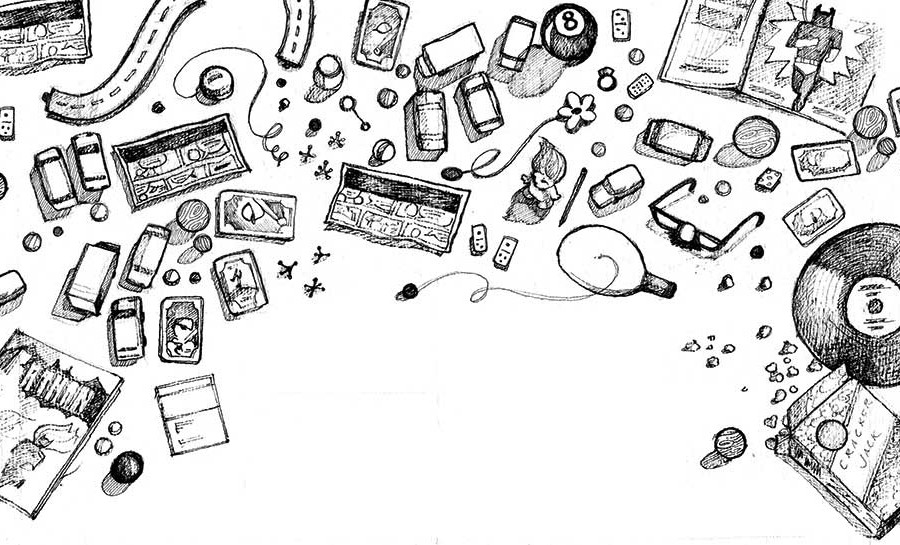 The taxonomic difference between a collector and a hoarder is exact. The distinction stems from the pedigree of items. If you’re stockpiling Swarovski crystal, no matter how irrationally, you are a sophisticated collector. However, that attic full of rubber gaskets brands you as reality TV fodder.

My treasures were stuffed into lunch boxes and drawers, stacked in the basement playroom, and stored in the garage of our 1954 ranch house. The “spread-out” factor obscured the evidence that I had a growing problem—somewhat. Had I been a more audacious nine-year-old, I would have told my disapproving mom this was not clutter but a collection of pop culture artifacts. Born centuries earlier, I probably would have collected relics: religious items belonging to putative saints, like jagged knucklebones and scraps of brocaded vestment.

As an adolescent grows into fitful manhood, they tell us, childish things are discarded. After my freshman year at Syracuse University, I felt it time to divest myself of most of my gum cards at a Boston memorabilia show. Long before online auctions, I parted with a small fortune for a pittance. The memory still stings.

The downsizing continued. In 1986, my parents relocated to Florida, and I was summoned to remove my collection from the old homestead. Years had passed since I had played among these items, so the purge was relatively painless.

I lugged the remainder—still several boxes’ worth—to New York, where I was renting a dark, one-bedroom apartment in an 1889 Lower East Side tenement. I crammed my time capsule into a hall closet—the only closet—where it sat for years. In the mid ’90s, it was time to sell off my paper collection, composed mostly of 1960s and ’70s DC, Archie, Harvey, Classics Illustrated, and Gold Key comics, as well as scores of magazines. When I named a fee and the visiting dealer let out a whistle and reached for his wallet, I knew I had undersold myself miserably. I watched with mixed feelings as my childhood was carried away.

I eventually met my future husband, Brook, and moved across town to his West Village apartment. Most of my collection was placed in storage, but the itch persisted. My new beau accepted my collecting, but periodically he would raise an eyebrow as he saw that gleam in my eye. By then, I was moving much of my estate on eBay (records, videos, Playbills), garnering several thousand dollars and freeing up room in our shared studio. When Brook and I relocated to Ulster County in July 2001, we found a two-bedroom 1948 cottage in High Falls. To my delight, there was ample room for both the collections and us. However, 35 years into my collecting mania, restraint had unexpectedly intervened: My acquisitive habits were now in inverse proportion to the size of my accommodations. My primary compulsion by now was a fledgling collection of vintage postcards from my hometown, which I deemed a safe pursuit. (Little did I know, Randolph had been a popular tourist destination in the 1900s and my postcard set now numbers in excess of 250 different pieces.)

My remaining talismans—I’ve kept the Batman cards, among others—are archived in plastic sleeves and sturdy binders. Brook rolls his eyes when a box of 1940s greeting cards or a stack of 1970s WRKO music surveys arrive in the mail. But now that we live in a two-story, 1912 home (with attic), nooks and crannies abound for secreting my ephemera. I take them out occasionally to savor the memories. Occasionally, my passions wane for certain pieces. I hold yard sales and wave them off.

Don’t worry, I tell Brook; I have this under control.